for cheaper on Amazon with free shipping! (keep reading if you’re lost…that’s an affiliate link, by the way, but it is absolutely the cheapest price I’ve found so far; the color is Aqua, and the 8X10.6 size is available right now. Also, don’t be fooled by the dull/ugly pics. It’s really bright in person).

First things first: we have been busy bees getting all of your Paint and Prose orders out (thank you!), but you still have until tomorrow at midnight to take advantage of our Buy 2 get 1 Free sale that includes all prints (even our brand new ones!).

For the most part, I have been limiting my house purchases over the last year, both because we don’t really need anything for this house and because I want to move as absolutely little as possible whenever that day comes.

There have been some exceptions when I find deals on a Facebook swap that are too good to pass up, but those have been rare.

But what’s a girl to do when she stumbles across a rug she spotted in someone’s Instagram over a year ago but had all but given up hope of ever finding? 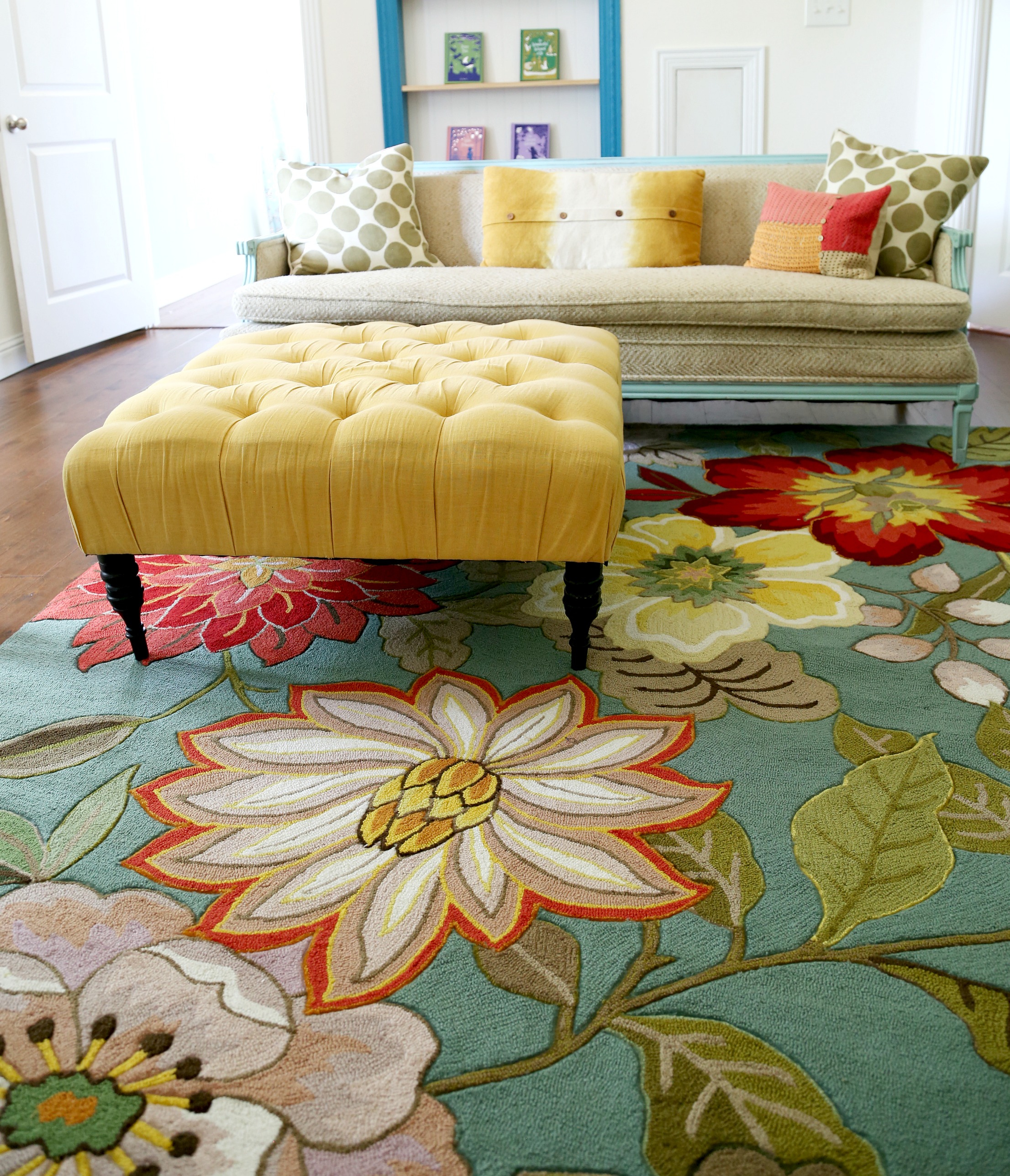 Because that’s totally what happened the other night as Shaun and I were at Home Depot sans kids (thanks, Mom!), and I stopped dead in my tracks and squeaked: “There it IS!” 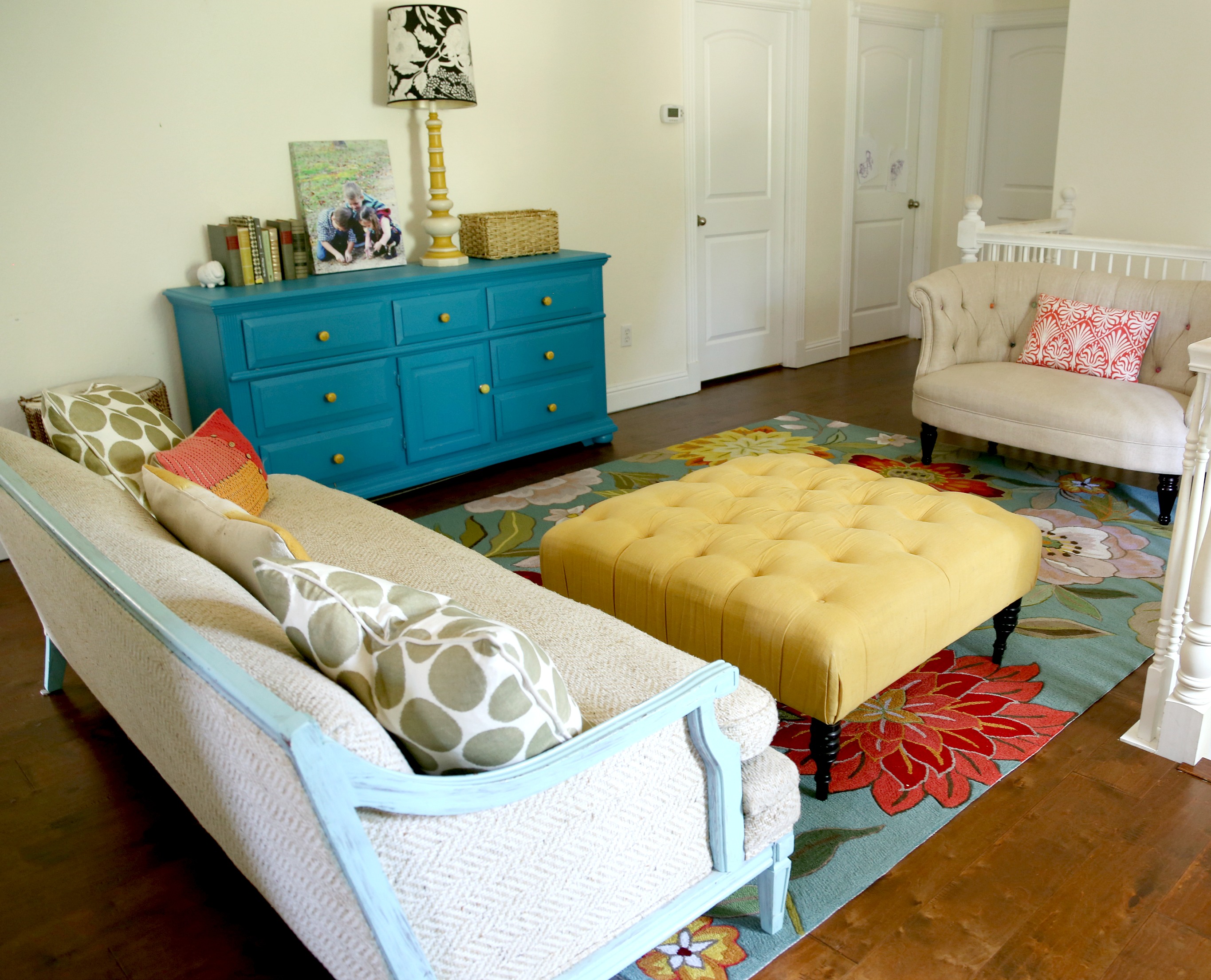 You see, after I spotted a pic of the rug, I asked the Instagrammer for the deets, but she didn’t know because it wasn’t her rug. A fellow commenter was nice enough to let me know that Home Depot carried it, which…obviously turned out to be true. But at the time, I couldn’t find it online or in stores anywhere. 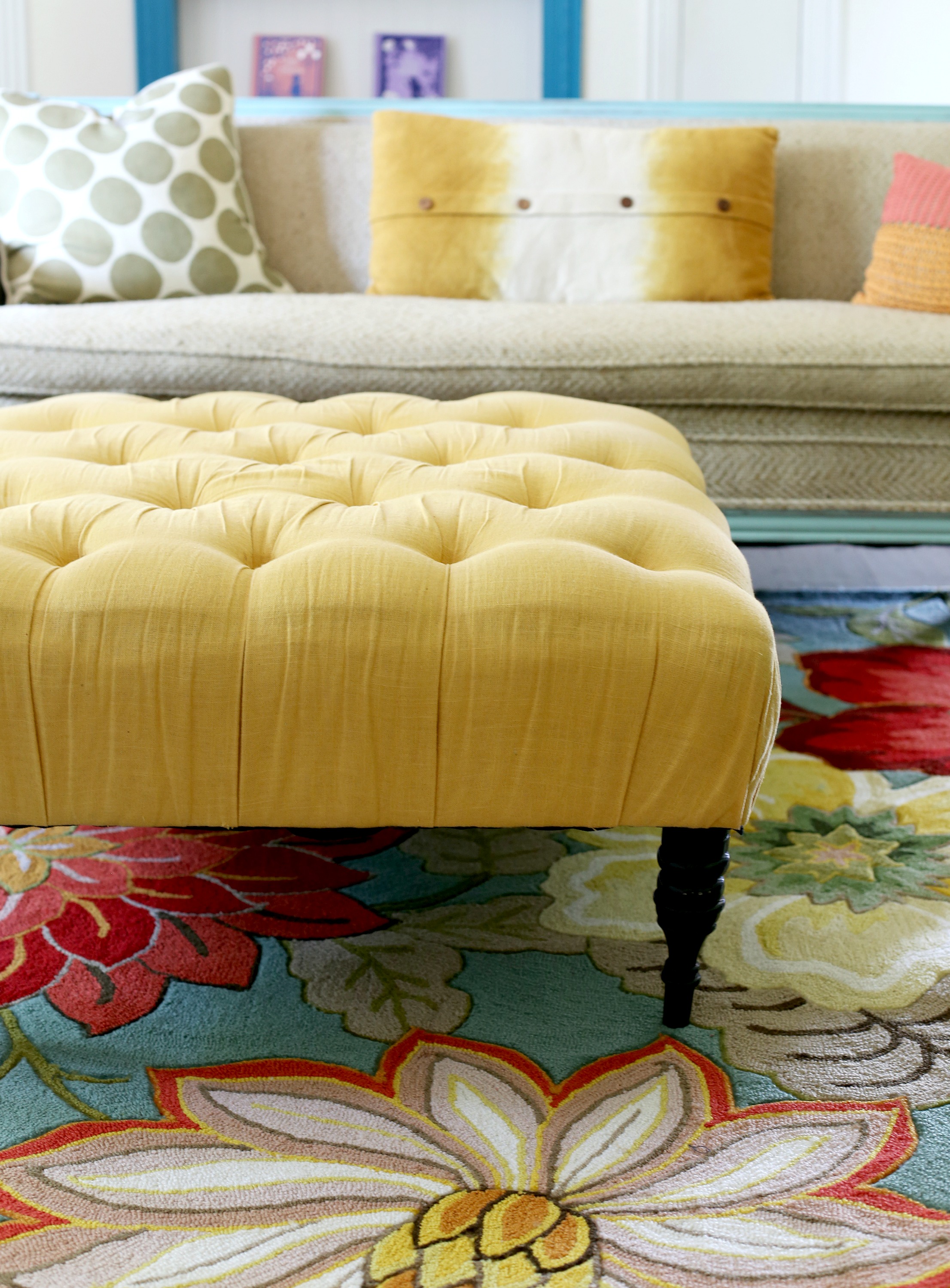 So, I buried that (oh-so-worthy) dream and forgot about it.

Until Monday night, that is. 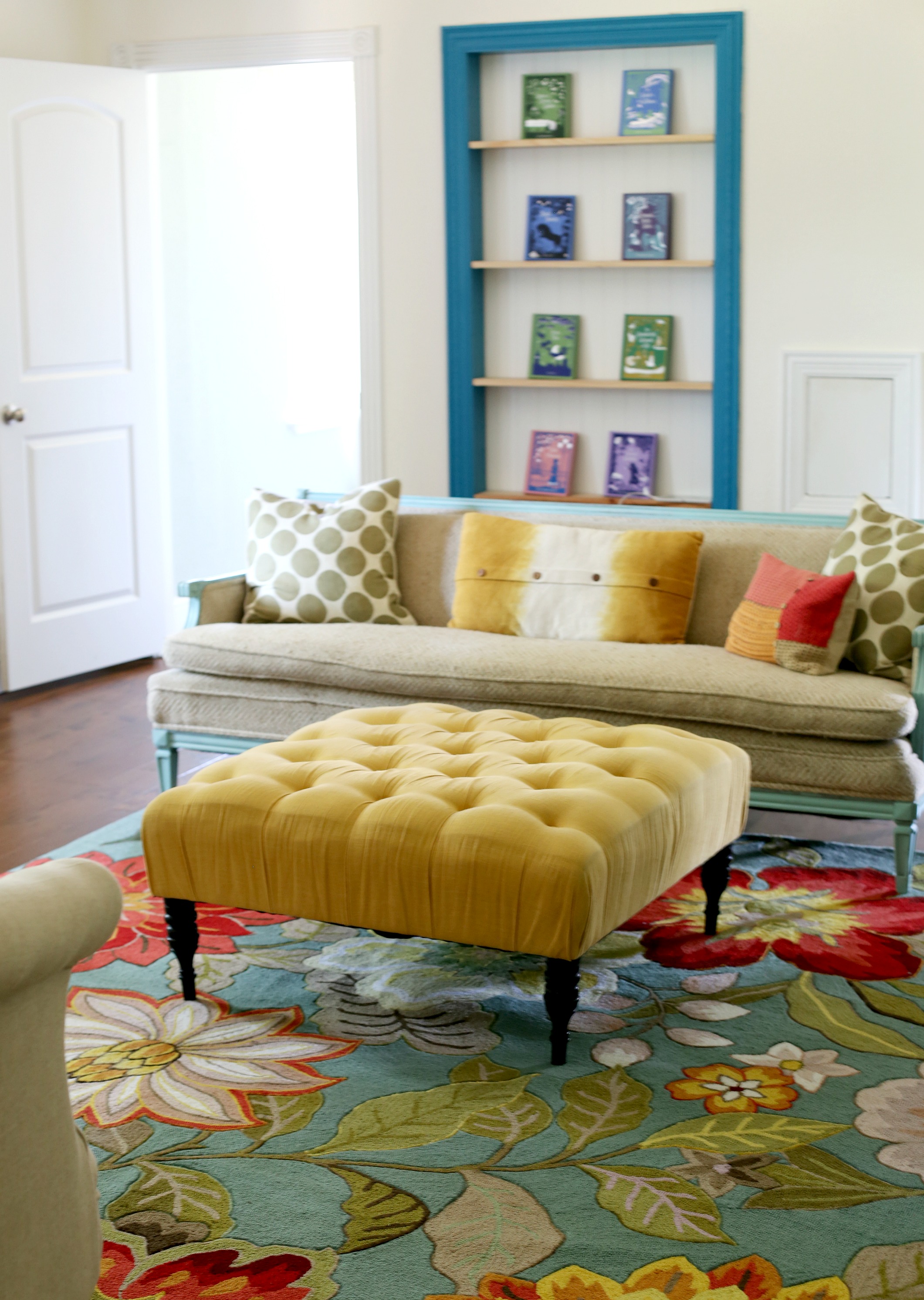 Y’all. I have to give major props to Shaun on this one. He stood there with me and stared at it for 10 straight minutes as I went through every room in the new house debating whether it would go well here or be big enough/too big there. He even had an associate open up a runner so that I could see it in smaller form (the 5X7 was the only one displayed, and it didn’t even have my favorite part of the rug–the pink flowers–on it). He was super sweet and patient and did an Oscar-worthy job of seeming interested for a man who doesn’t give a rip about rug designs.

Ultimately, I decided that a) I wasn’t sure whether it would skew too traditional for the couple of spaces it might work (namely: the girls’ play room or my craft room), and b) it was the wrong size for the places that it made the most sense. 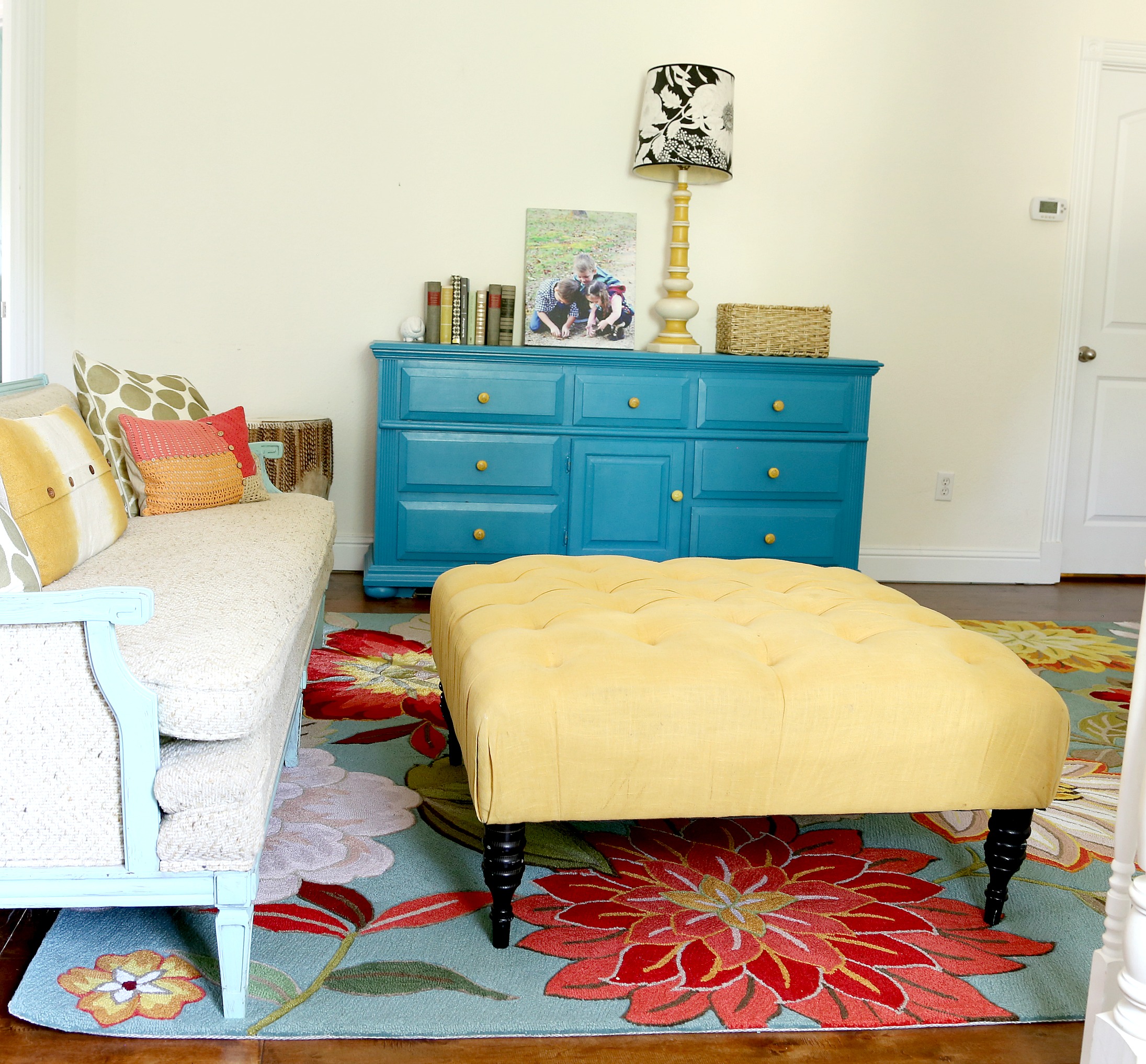 But that darn rug nagged at me for the next 24 hours. Why? Because we didn’t have enough chutzpah to have the big version (8X10.6) opened to look at in person. And I knew that, until I saw it in person in my house, I wouldn’t know FOR SURE whether it was the rug for me/the new house. 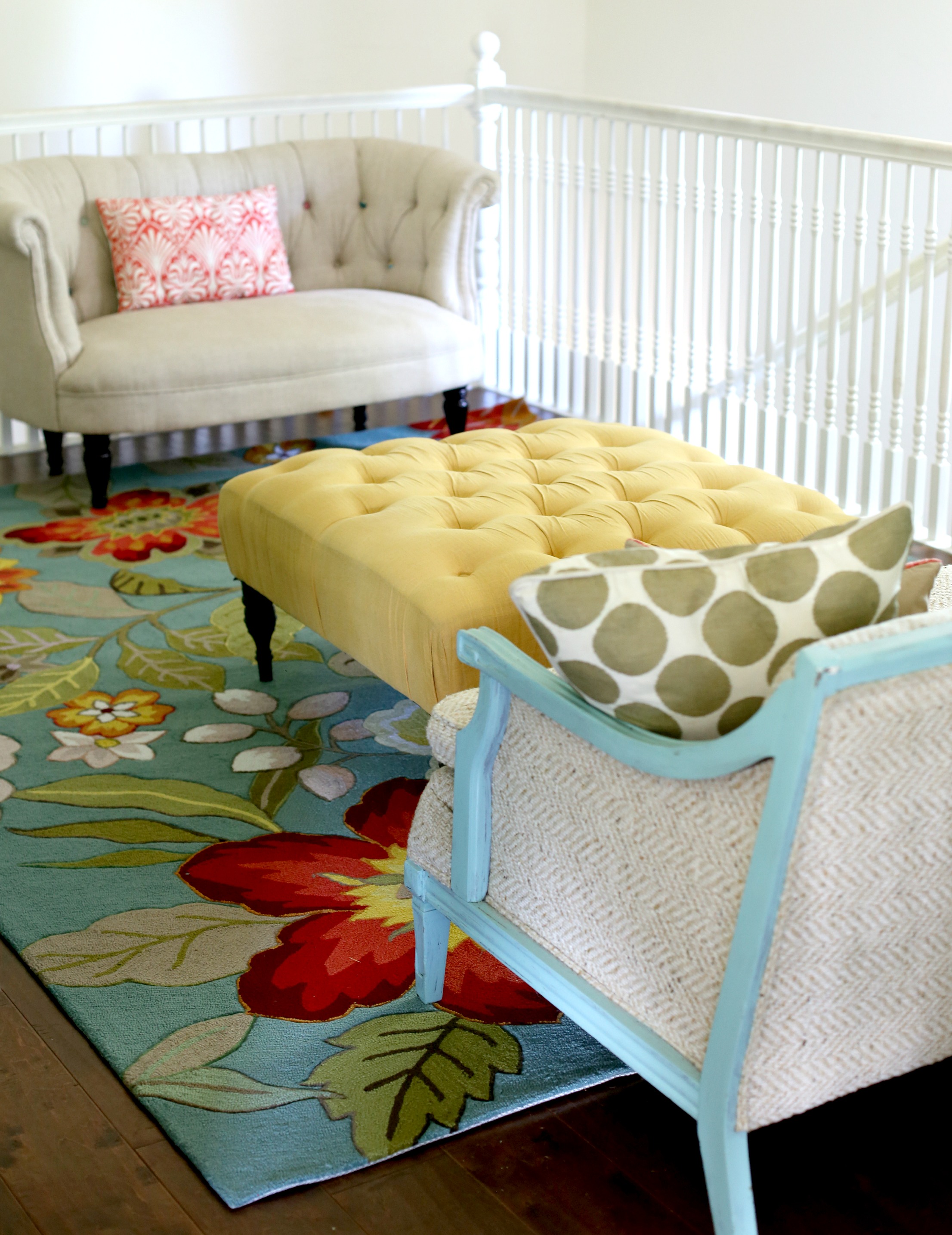 So, the next day, the twins + Theo and I went back to Home Depot while the older kids were at piano lessons. Clearly, I was serious about this rug. I mean, I didn’t buy it while I had no kids + a husband to help me haul it, and then I dragged 3 littles across a SCORCHING parking lot (East Texas: any time you want to cool down juuuuuust a smidge will be fine with me) into a big box store where I loaded up a large rug on a small cart and proceeded to make a spectacle of myself getting it into the back of the van. Thank goodness for the nice lady who noticed me sweating through my clothes in my efforts to work it over the top of the seats, and thank goodness for her being nice enough to ignore the messy  back of my van. (I couldn’t help but mentally chuckle at her: “I had 3 little kids once too; bless your heart.” If she only knew :))

ANYhoo, I got it home and set it up in the sitting room upstairs to see how I liked it, and…I do. 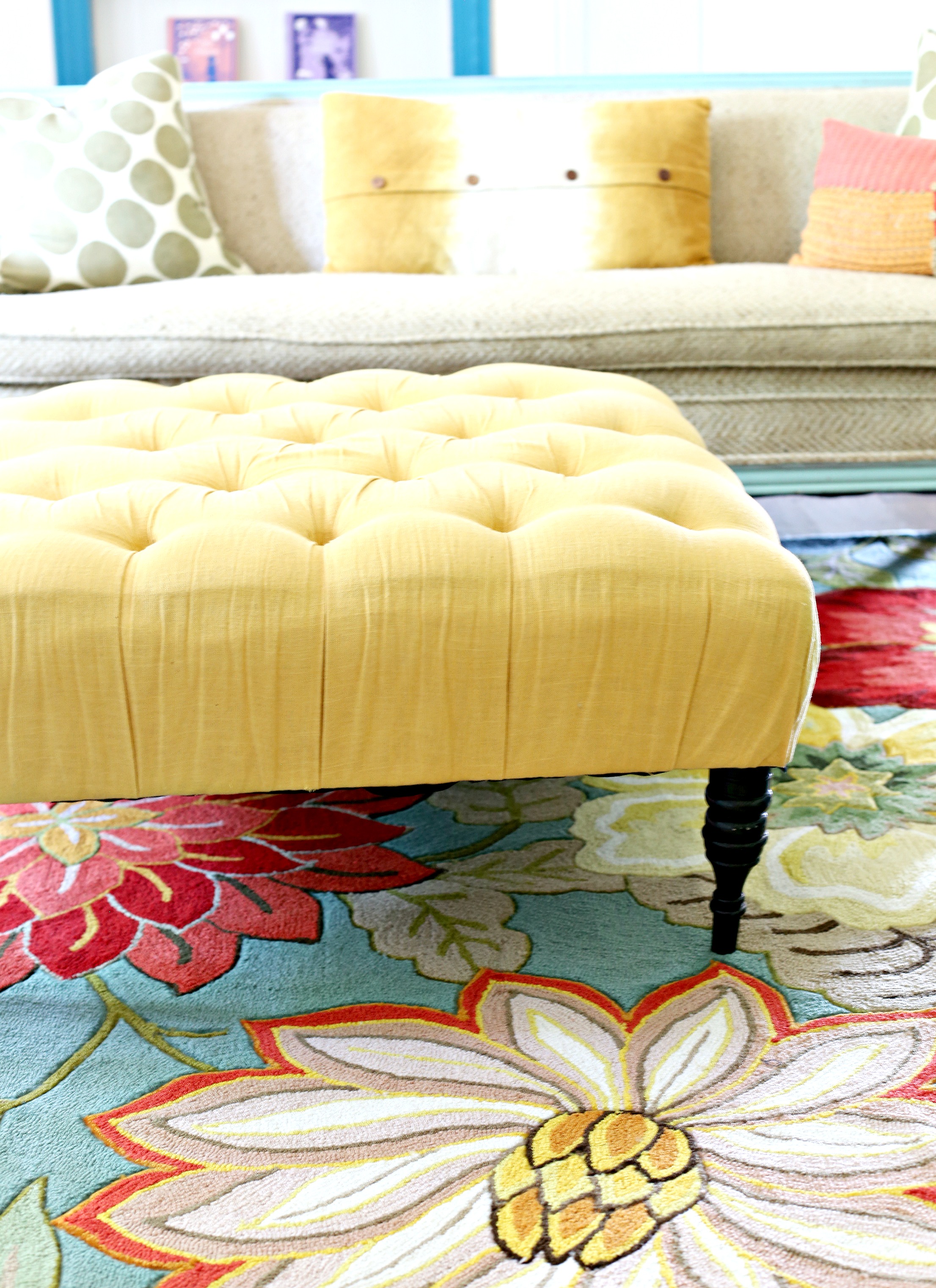 In fact, if all of it looked like this part, I would LUUURVE it without reservation. But that whole: “Is it too traditional?” question keeps niggling at my mind–mostly because of the deep red + yellow. Nothing so inherently traditional about them. That’s just how they strike me. 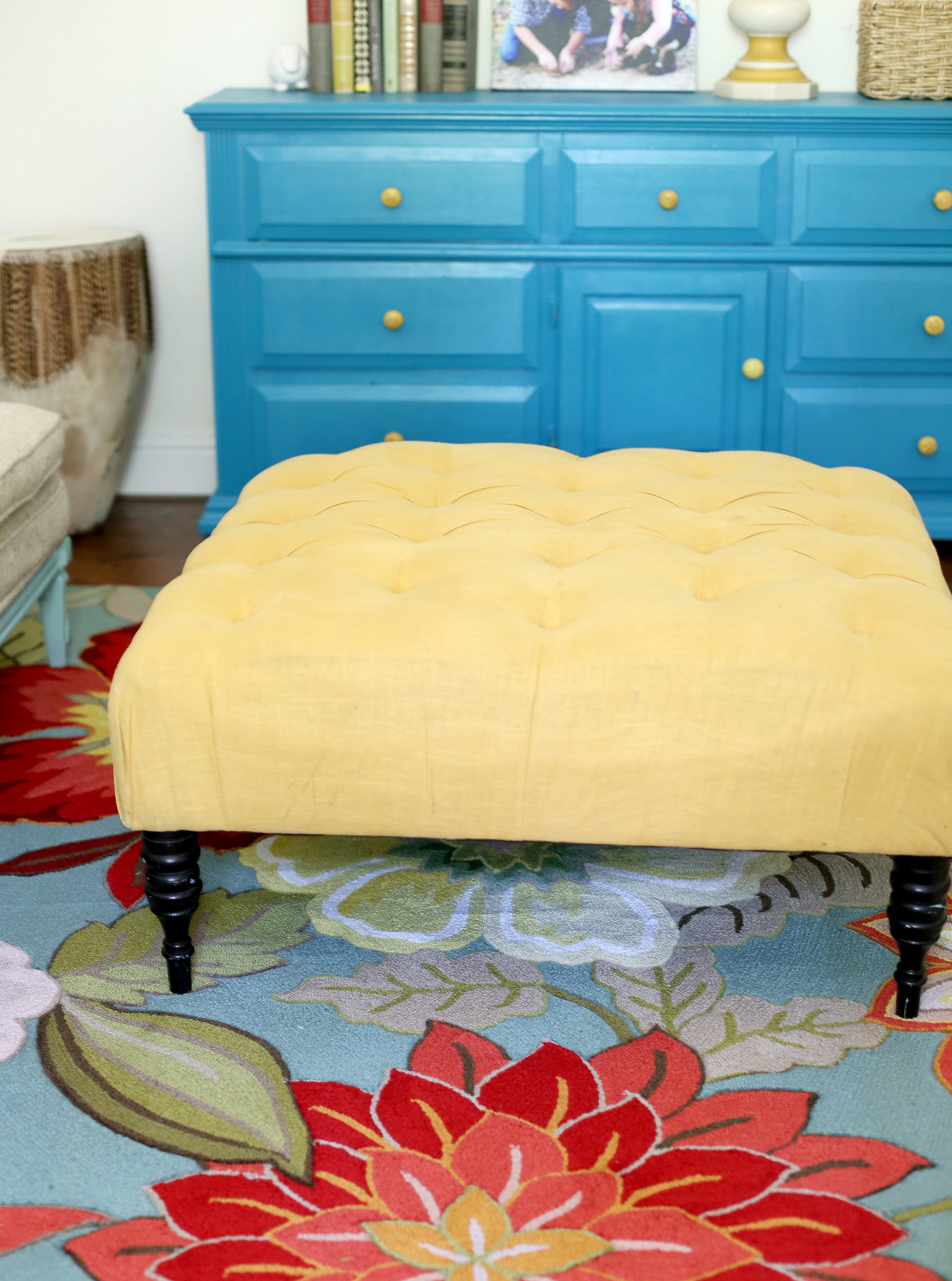 Which is where you guys come in. What do you think? Am I crazy for worrying about it so much? (Let’s go with yes, and move on).

Do you think it gives off a funky/happy/Anthro vibe or…more of a Pottery Barn feel? (Nothing wrong with either; I’m just going for the former over the latter).

In case you’re lost on what I mean by funky vs. traditional, the pic on the left below is my favorite view of the rug, mostly because those pink flowers against the teal just make me happy and have a slightly modern feel to them. The picture on the right focuses on the darker, more traditional-looking patterns and colors, and I’m not as in love with it. 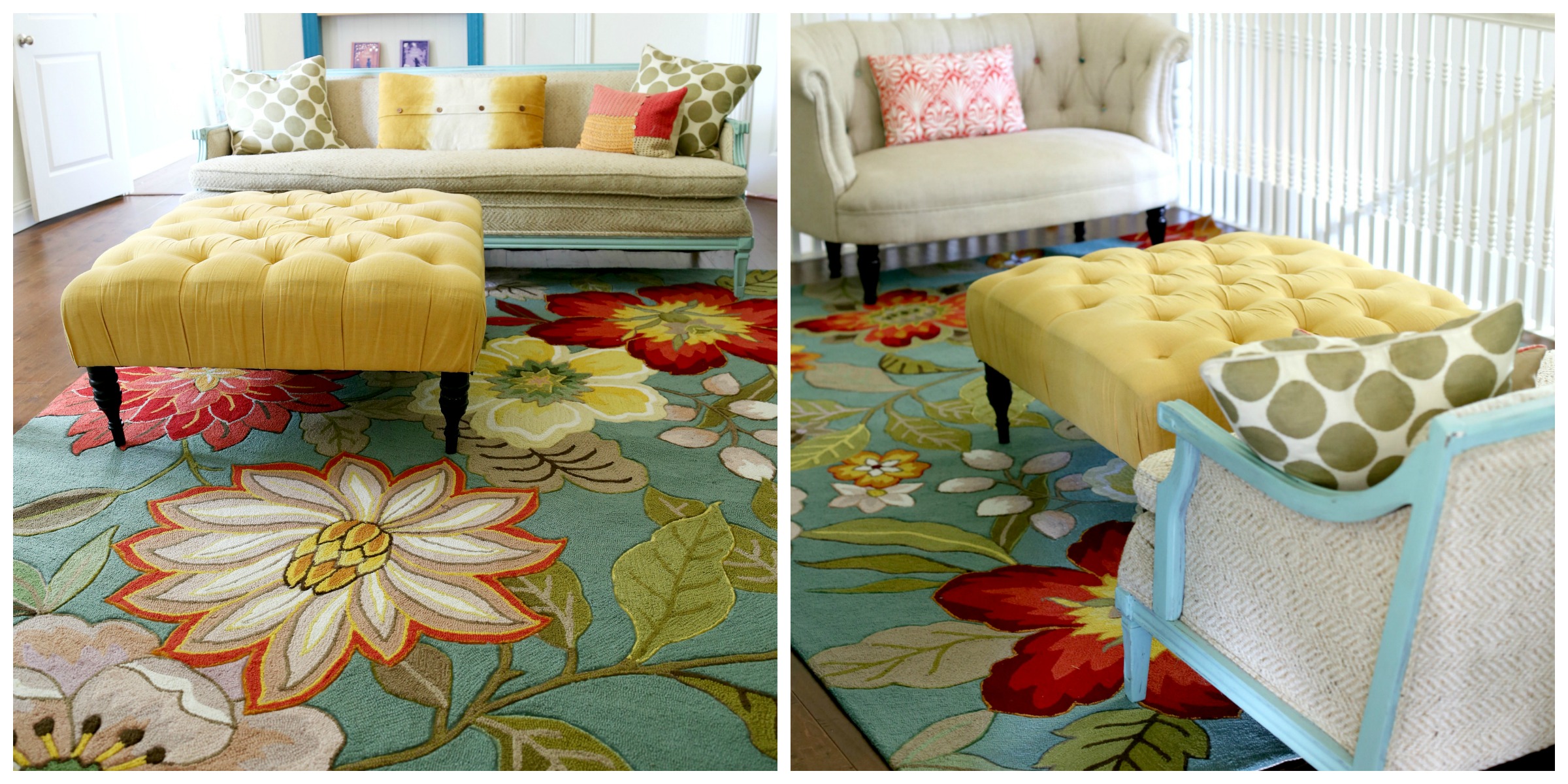 It’s like it’s a split-personality rug. At least in my strange mind.

So, the question is: could you picture this rug in a girls’ room or craft room? I, personally, think it’s a better fit for a dining or living room, but it’s too small for either in the new house.

Ugh. The first-world, extremely insignificant problems I have to do deal with, y’all.

Oh! And just in case you’re wondering, it’s NOT wool, so it won’t be a beast to vacuum, and it’s quite thick and cushy/comfy underfoot. 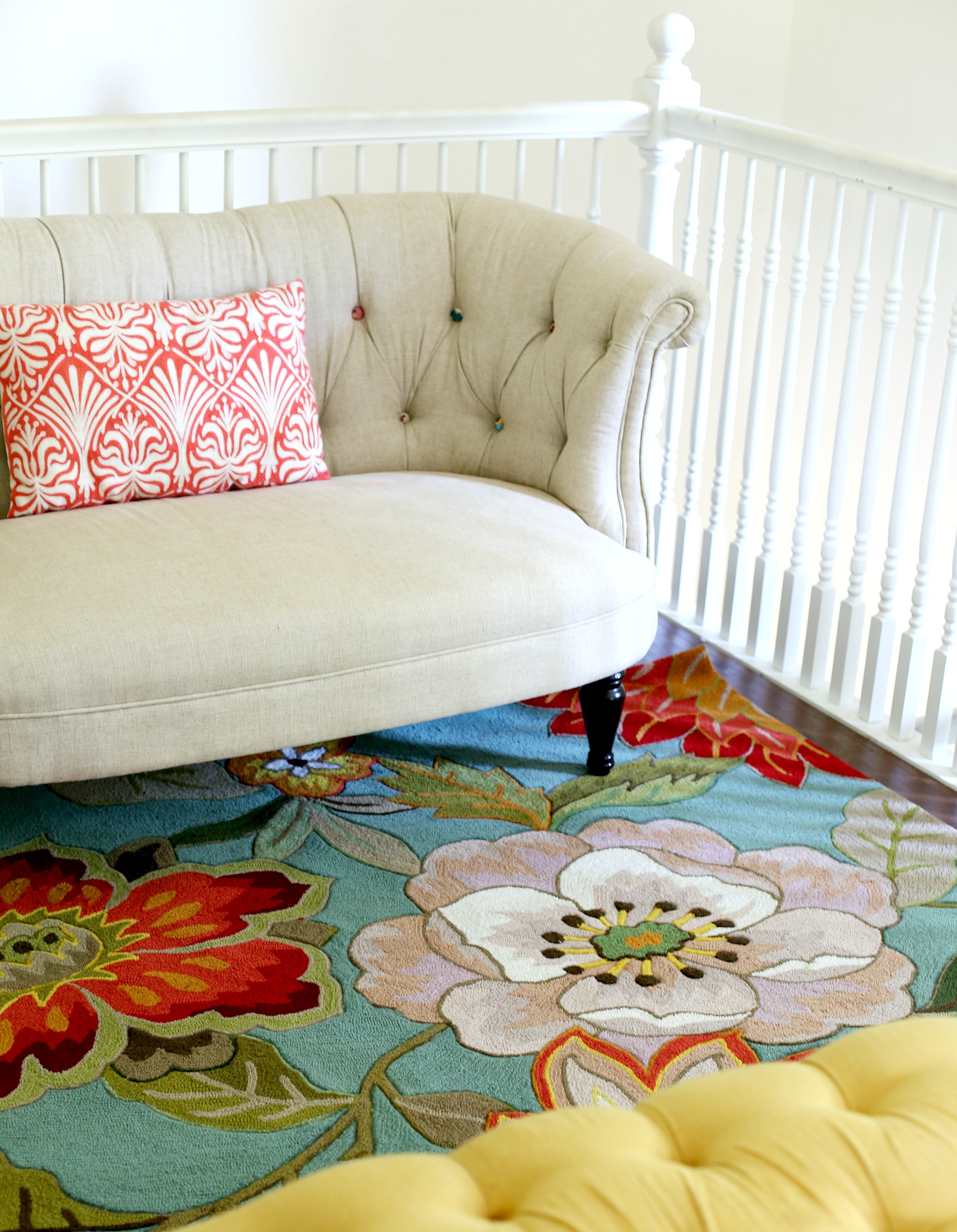 Honestly, when I ask you guys for your advice, I’m usually leaning one direction or another. Sometimes your feedback sways me. Sometimes, I stand firm.

But this time, I’m genuinely torn. 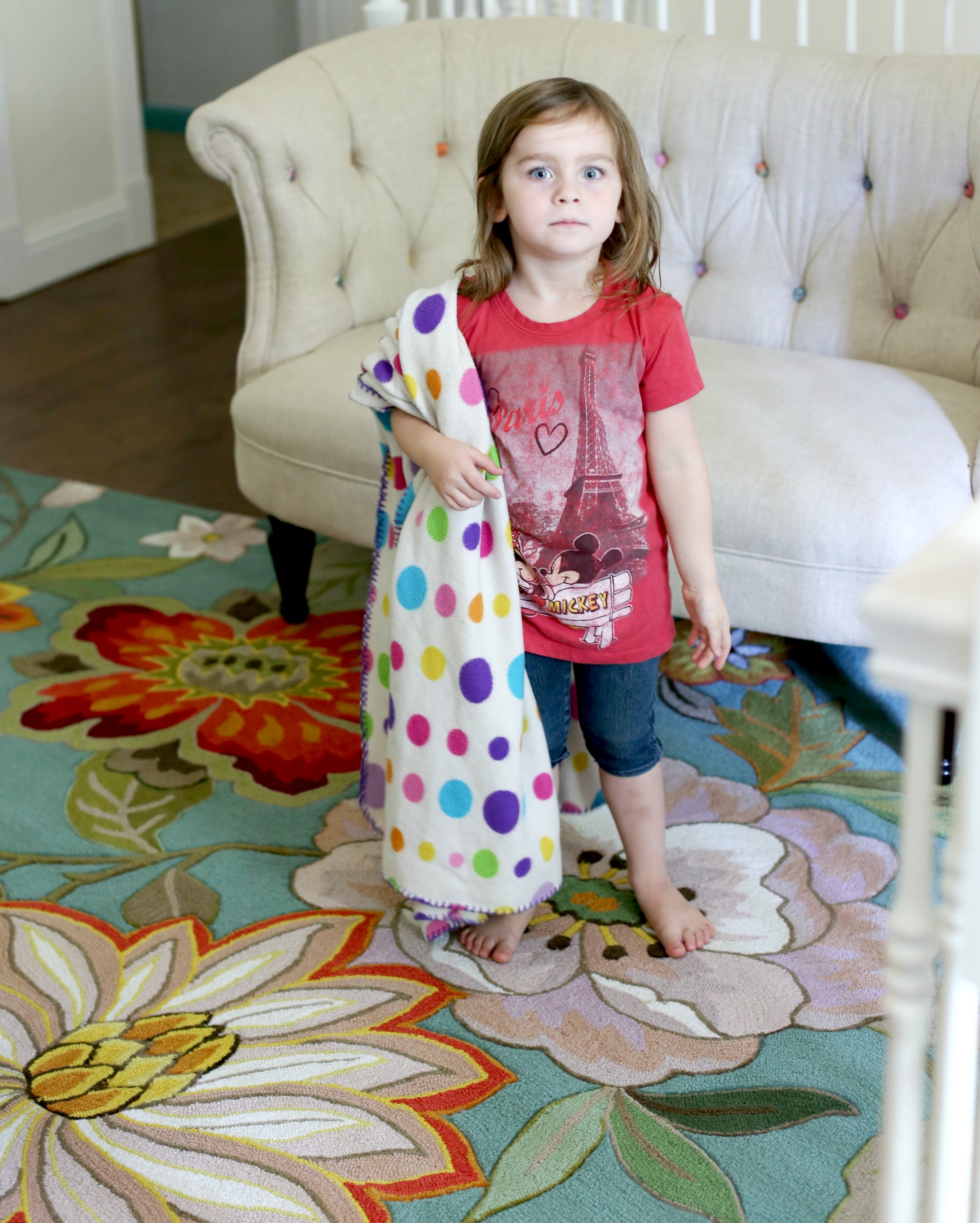 Yeah. I have no idea either.