If you read my Vail Wedding recap, you know that, while we had an absolute blast, it was a jam-packed week. Nothing wrong with that. But hauling 6 kids around to multiple events a day and missing bedtime 5 nights in a row definitely takes its toll.

Truth be told, after last year’s best-vacation-ever stay in Louisville, CO, we had already planned on making the drive again this year before we ever heard anything about the wedding. So, when we heard the dates, we decided to tack a little extended stay on the end–this time in Broomfield (also close to Boulder/Louisville/Denver).

Yet again, we managed to snag an adorable, reasonably priced, ideally situated Airbnb rental. I was sure we wouldn’t be able to top the placed we scored last year (or find anything at all; the pickings were slim this year), but this one–with its twin over full girls’ bunk bed, basement toy room, fenced in backyard + sandbox, and ample bed/bathrooms, was even better. 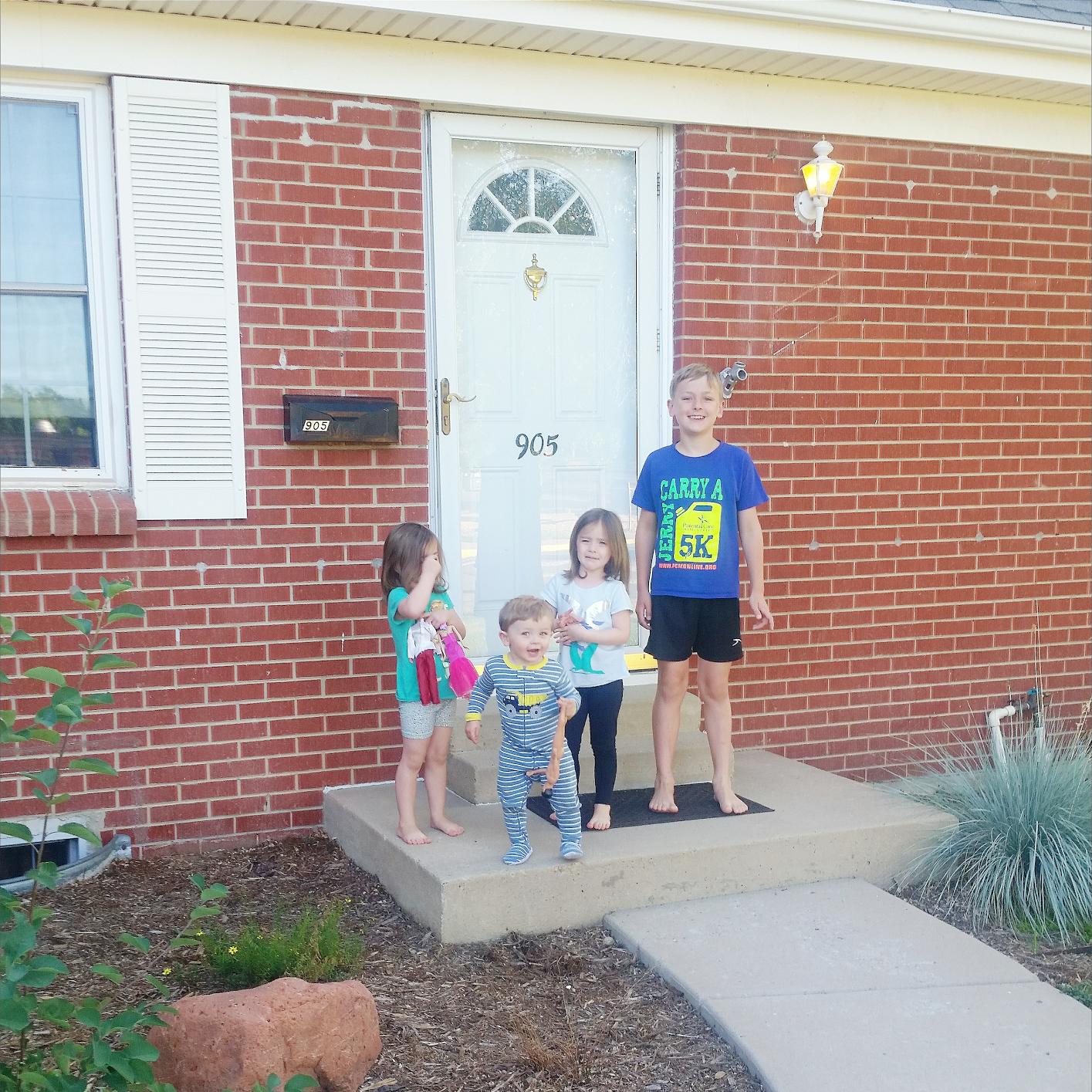 {If the hand over the eyes is any indication, Evy was pretty embarrassed for the naked–and likely motion-sick–Ken doll that Theo is so gleefully toting}

I’m almost embarrassed to say how little we did during our five days there. But I can say this: we needed the rest. The kids were pretty exhausted after all of the wedding excitement, and I’m not too proud to admit that I was too.

So, we vegged. We played board games. 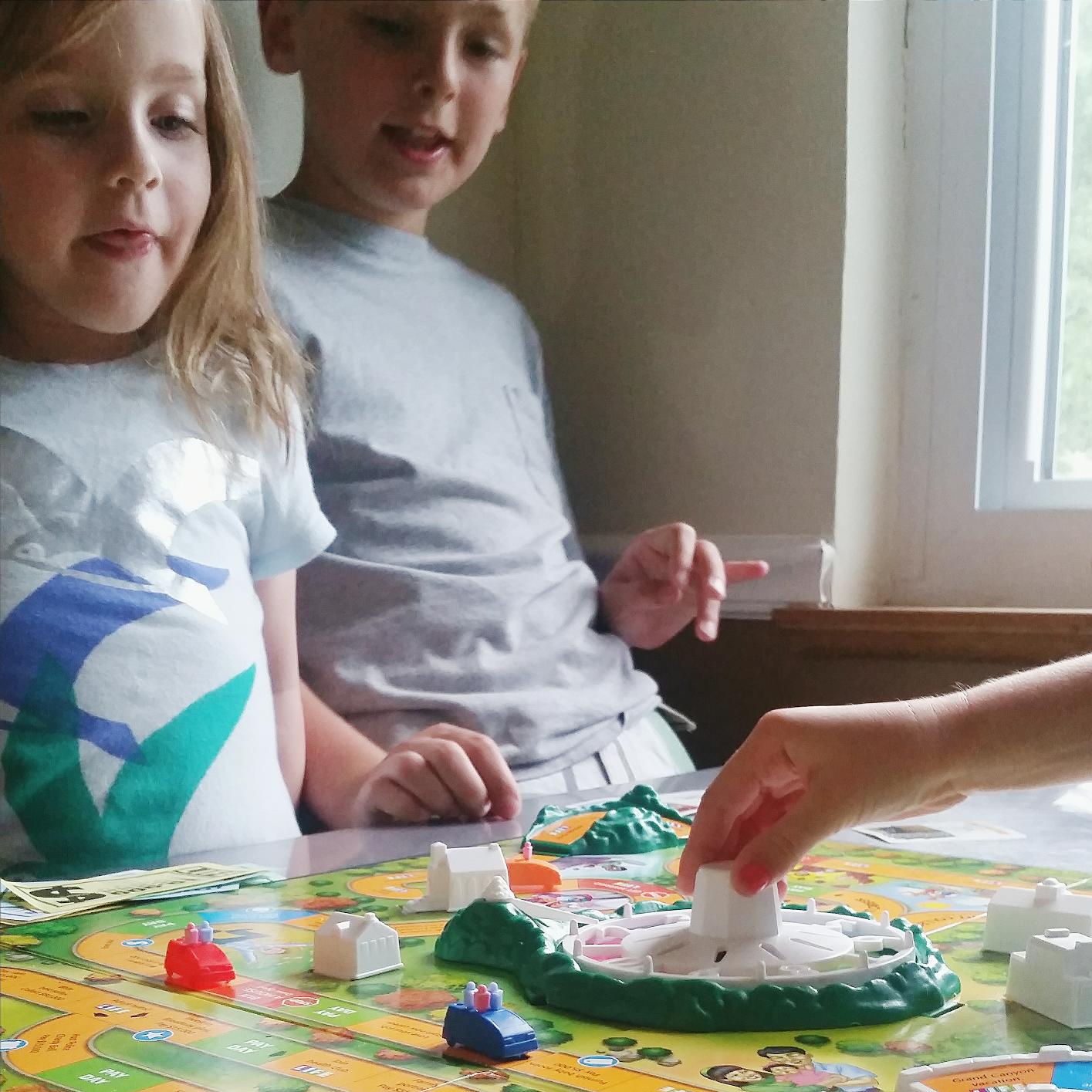 {We eventually had to resort to a “virtual” Life game spinner on Shaun’s phone for the twins, since the real deal kept getting wrenched off of the board}

We took naps. We ordered takeout. And we played an inordinate amount of a very addictive, very silly internet game called slither.io. We are not a video or phone game family (I literally didn’t have a single game on my phone before I downloaded this one), but we made up for a fair bit of “lost time” that week. 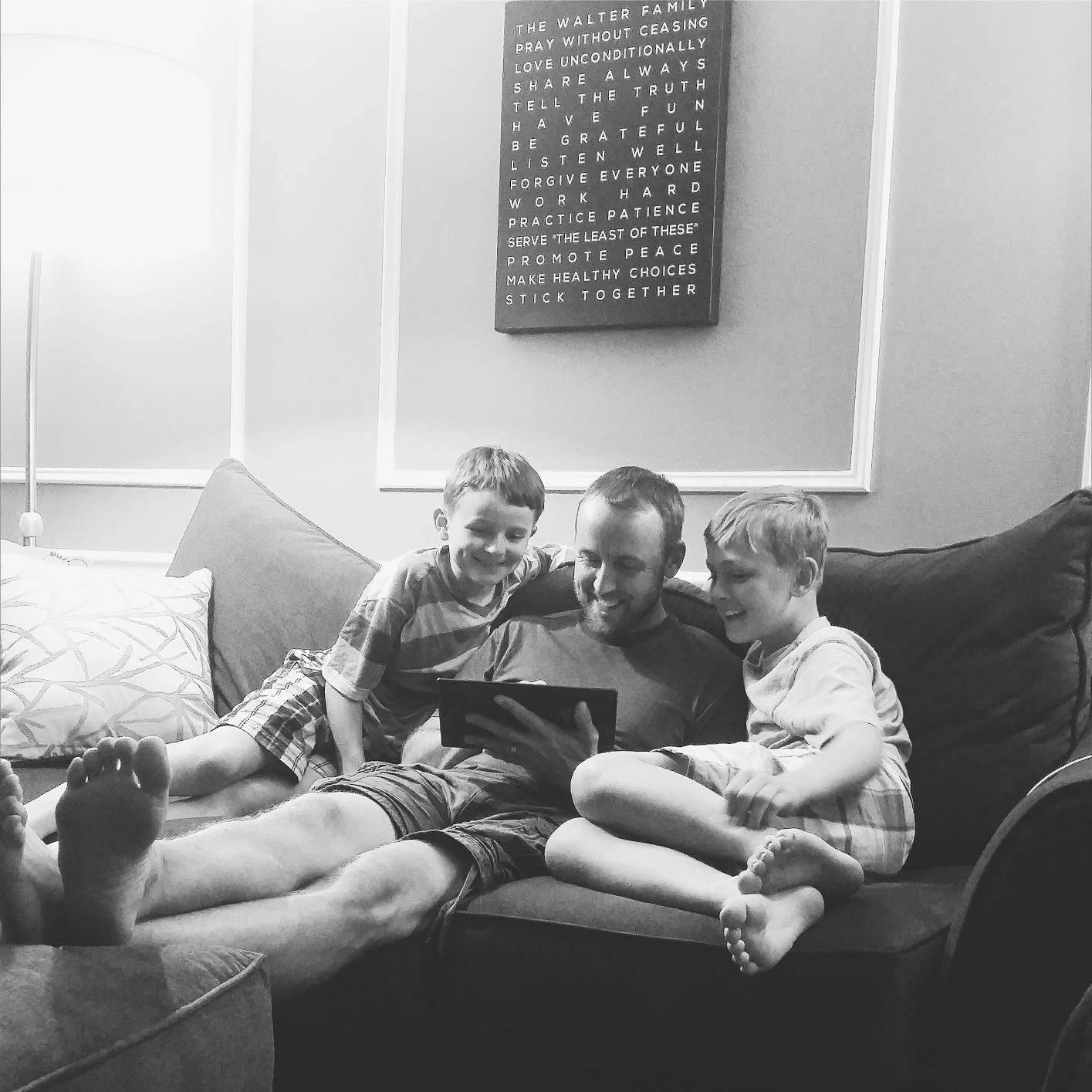 ANYhoo, lest you think that all we did was stare at our phone/tablet screens (the boys do not have phones and had to take turns playing on the 1 tablet we brought, and the girls were downstairs playing with the “new” dolls for hours on end), I would like to point out that we did get out of the house and enjoy the local culture a time a two–starting with the Broomfield Farmer’s Market. 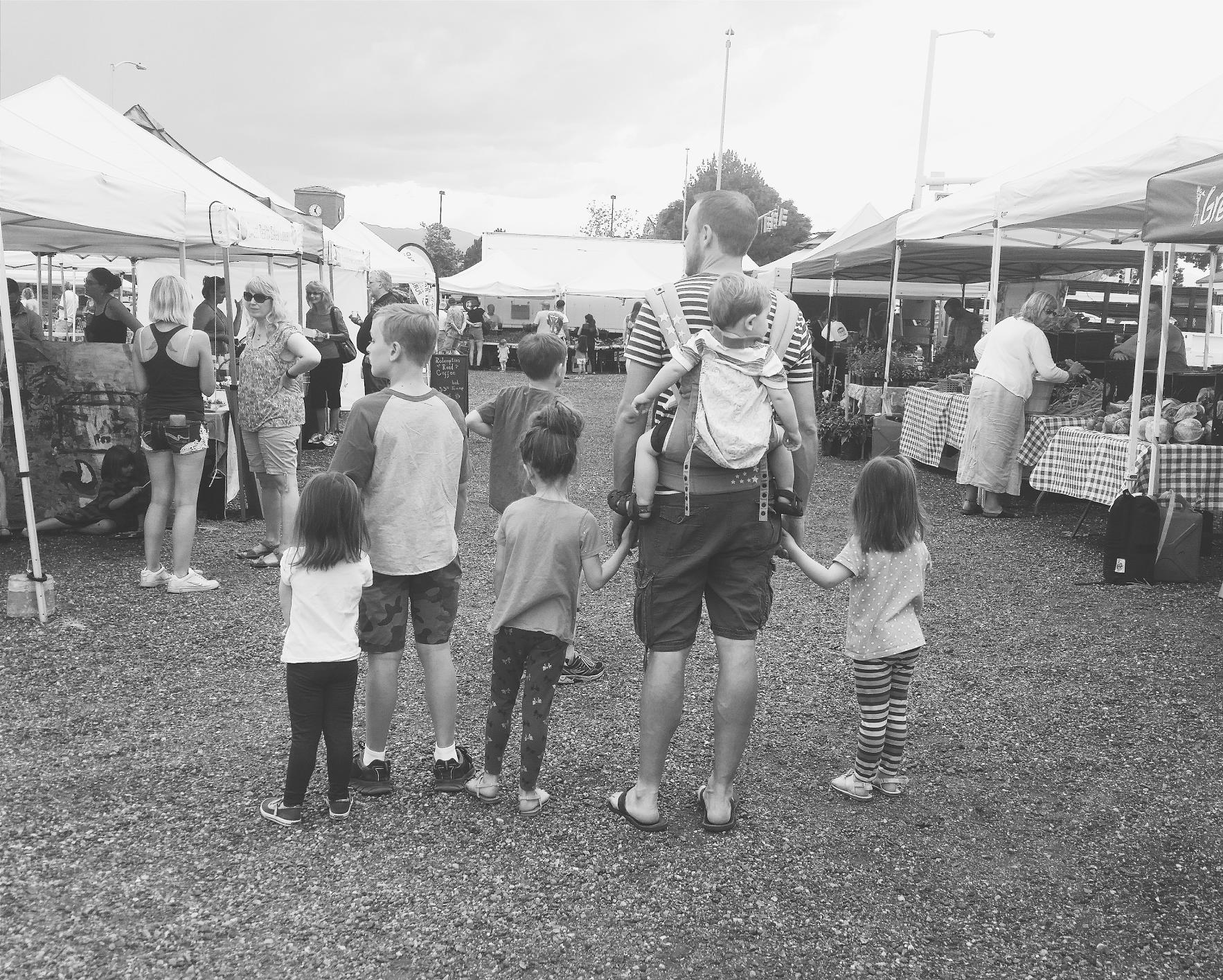 It was a fairly small operation, but it boasted of being the ONLY volunteer run farmer’s market in…(insert large geographical area that I don’t recall). I didn’t really know what that meant until I realized that they had several booths for kids, including one with giant bubble wands and another with several carnival-style games that were completely free. 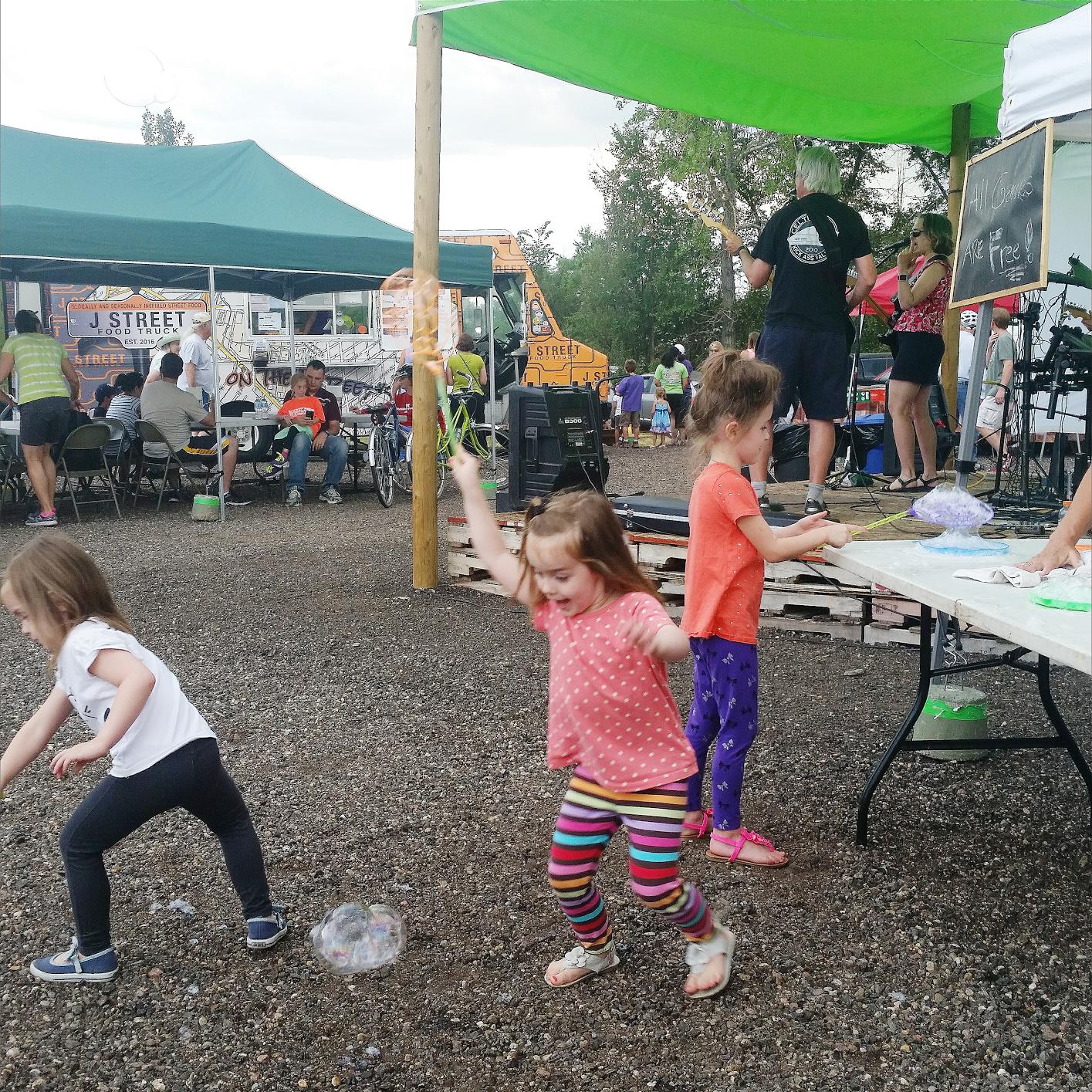 PLUS! They held a zucchini-mobile race for the kids (complete with free zucchini + stick-on wheels) with a $20 first prize.

We went in a little dubious and left an hour and 1/2 later full (from the yummy street truck food) and happy (even though we didn’t win the zucchini race). 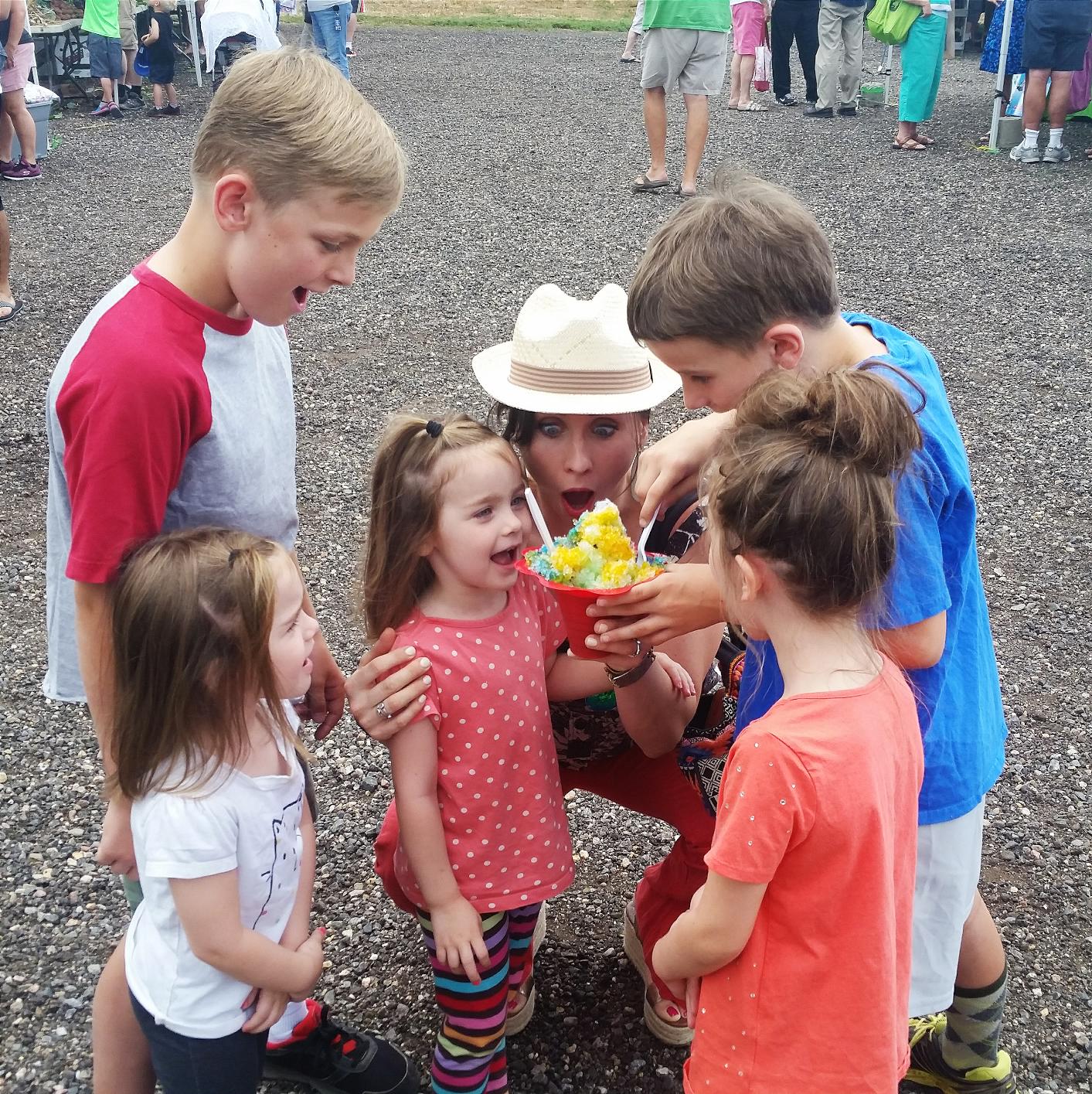 Another night, we attended a free Family Movie Night at the Broomfield Auditorium, and yet another afternoon, we watched the mighty Mudslinger–a trick pig from a traveling show called Top Hogs–do amazing feats like…using his snout to lower a ring so he could walk through it when he was supposed to have jumped through it from a decent height (played for laughs…it was cute). 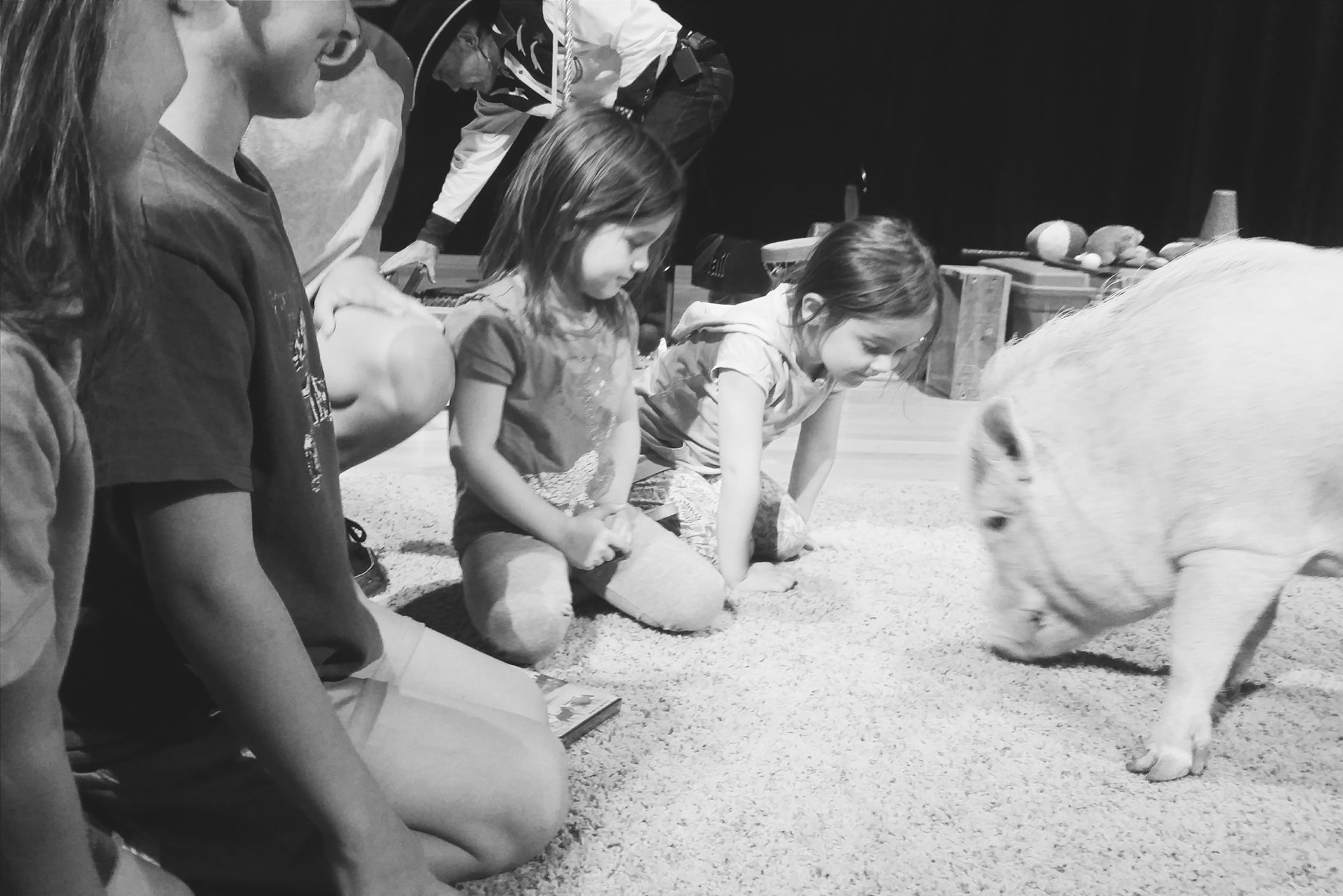 That show also featured Bullet, the rescue dog, who did a good portion of one routine in reverse at rather frantic speeds, which, weirdly, was one of the funniest things I’ve ever seen.

Shaun and I even managed to get a date night in, since the people who owned the house–sweet Christians who had a special needs daughter–had left trusted babysitter recommendations. 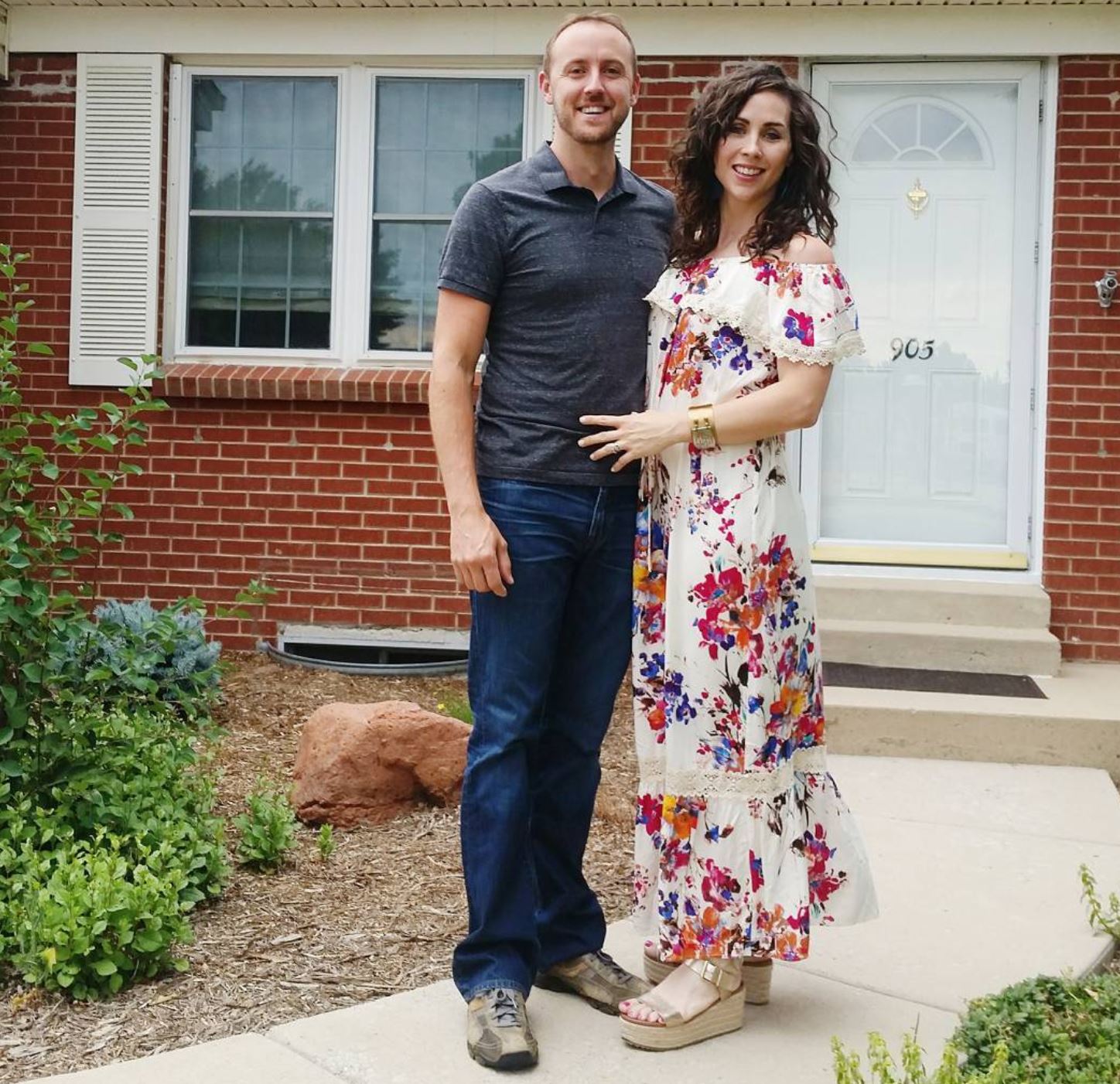 We headed down to Pearl Street in Boulder and ate at an incredible restaurant called Riffs Urban Fare. Maybe this sounds like a superfluous detail, but our waitress was FANTASTIC. She was so attentive, knowledgeable, friendly, and cheerful that it definitely made the whole thing a bit more of an “experience.”  (Plus, the food was amazing). 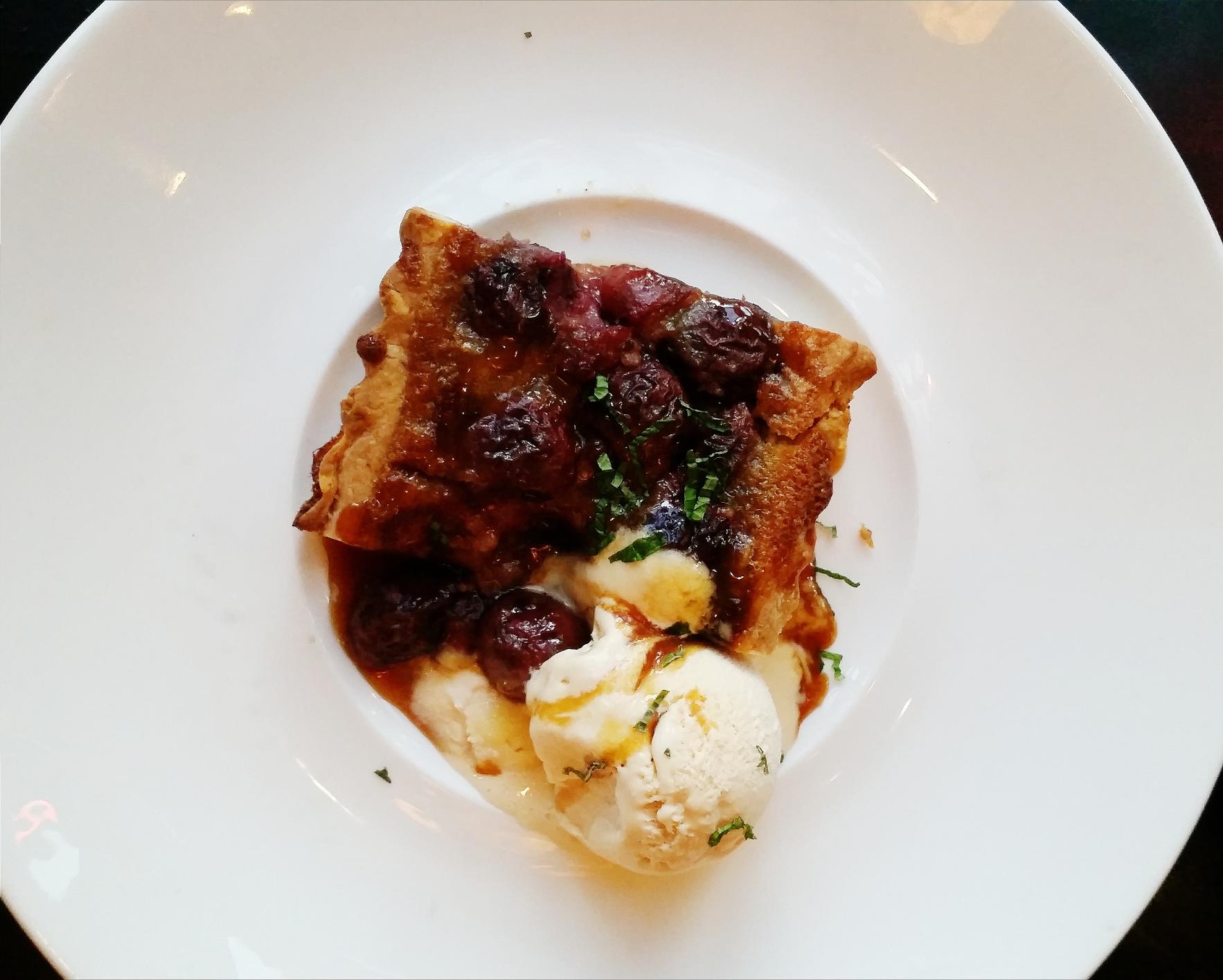 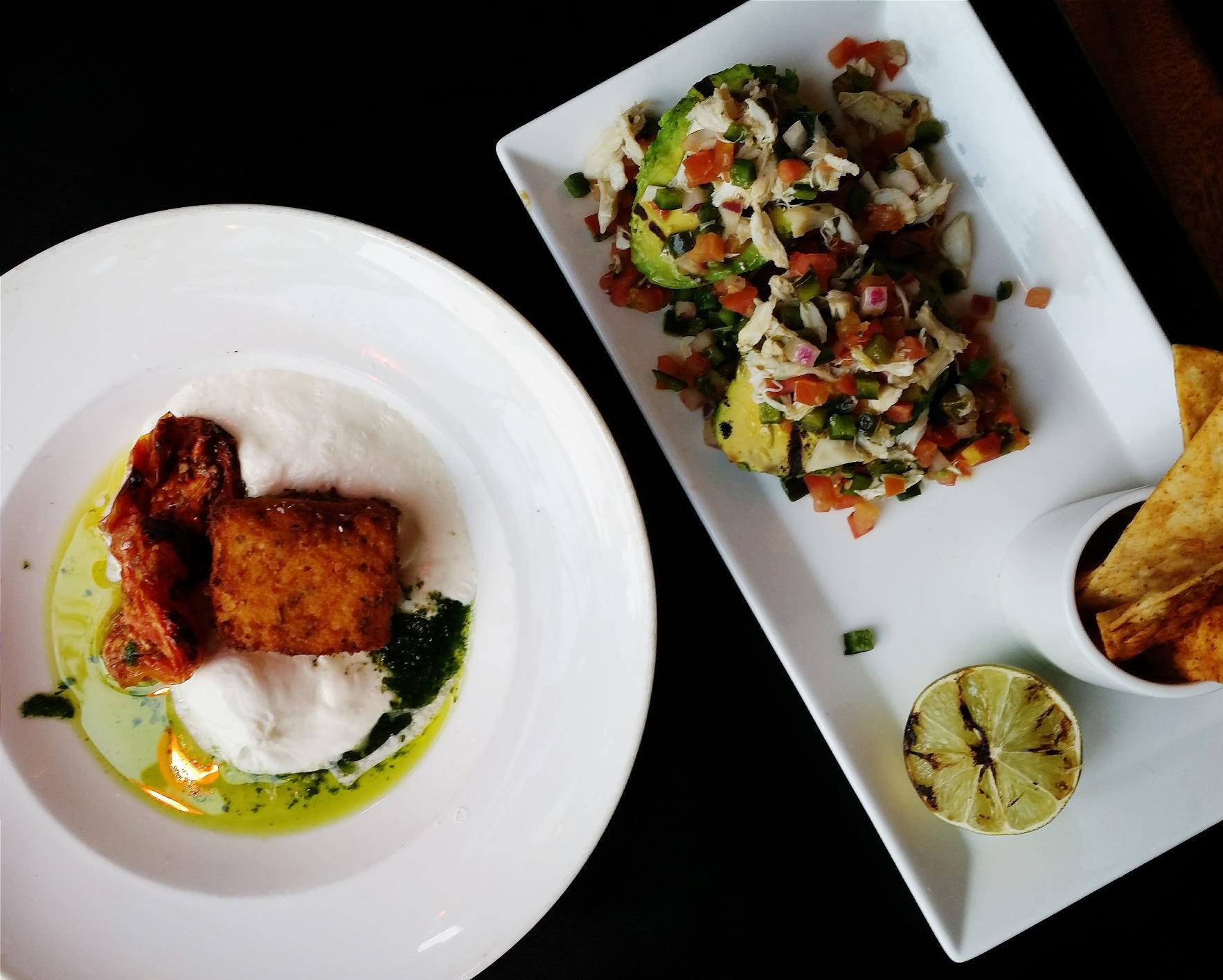 Holy wow. I’m getting hungry just staring at this yumminess.

After dinner, we wandered down the promenade, peering in cute shop windows, and then circled back to sit on a bench, where we sat and talked for over an hour. More and more, I find myself cherishing moments of rest like these over activity. I’m pretty sure that’s a sign of aging. And I’m pretty sure I’m fine with that. 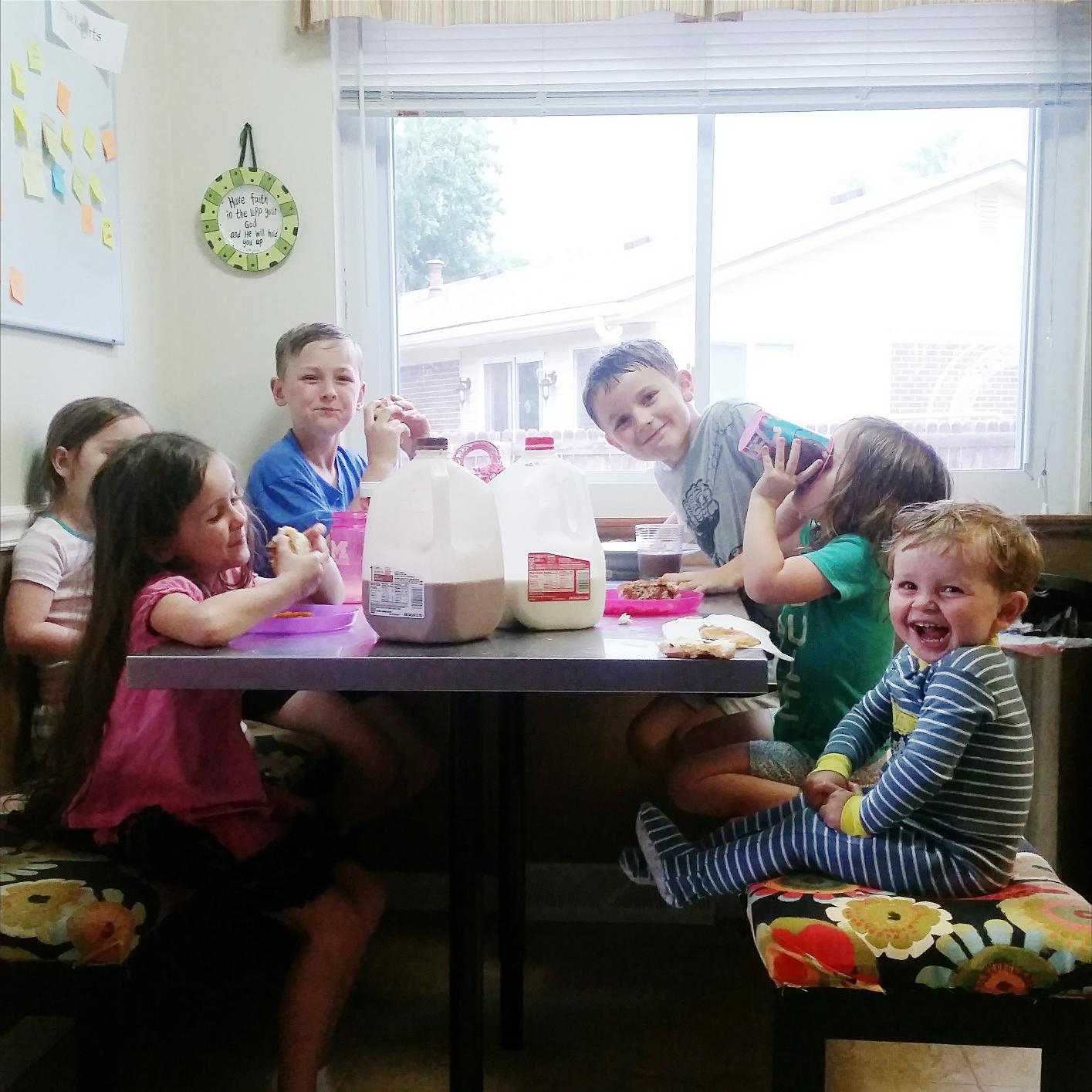 {In case you haven’t noticed yet, Theo has quite the personality on him; apparently, end-of-trip donuts get him jazzed. Me too, T. Meeee too}

Oh, and just because… 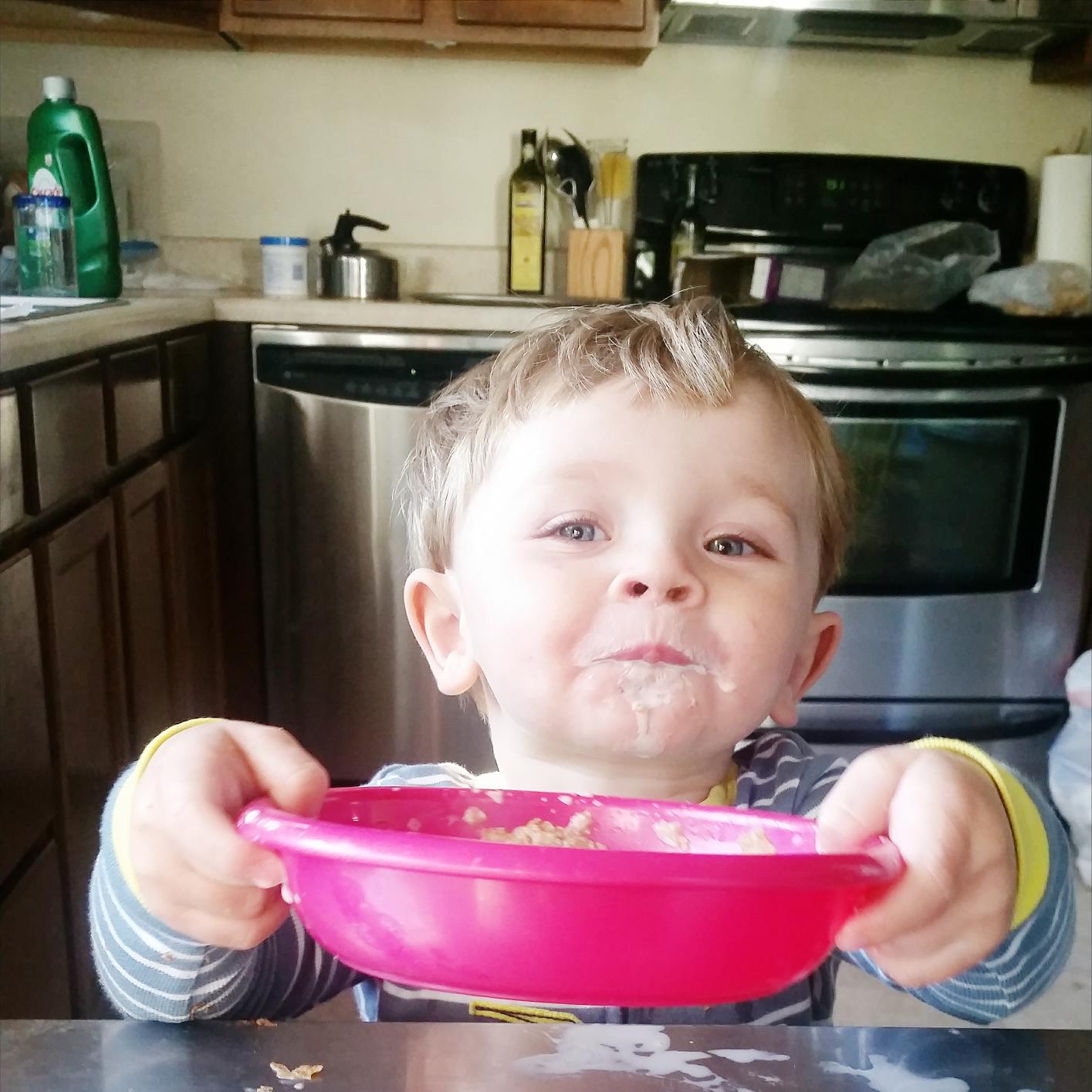 {This kid just makes life fun. That is all}

Friday morning, I managed to sneak away to Boulder again for a solo shopping trip to Anthro and LOFT (where I found a dress for $4.88–HOLLA). 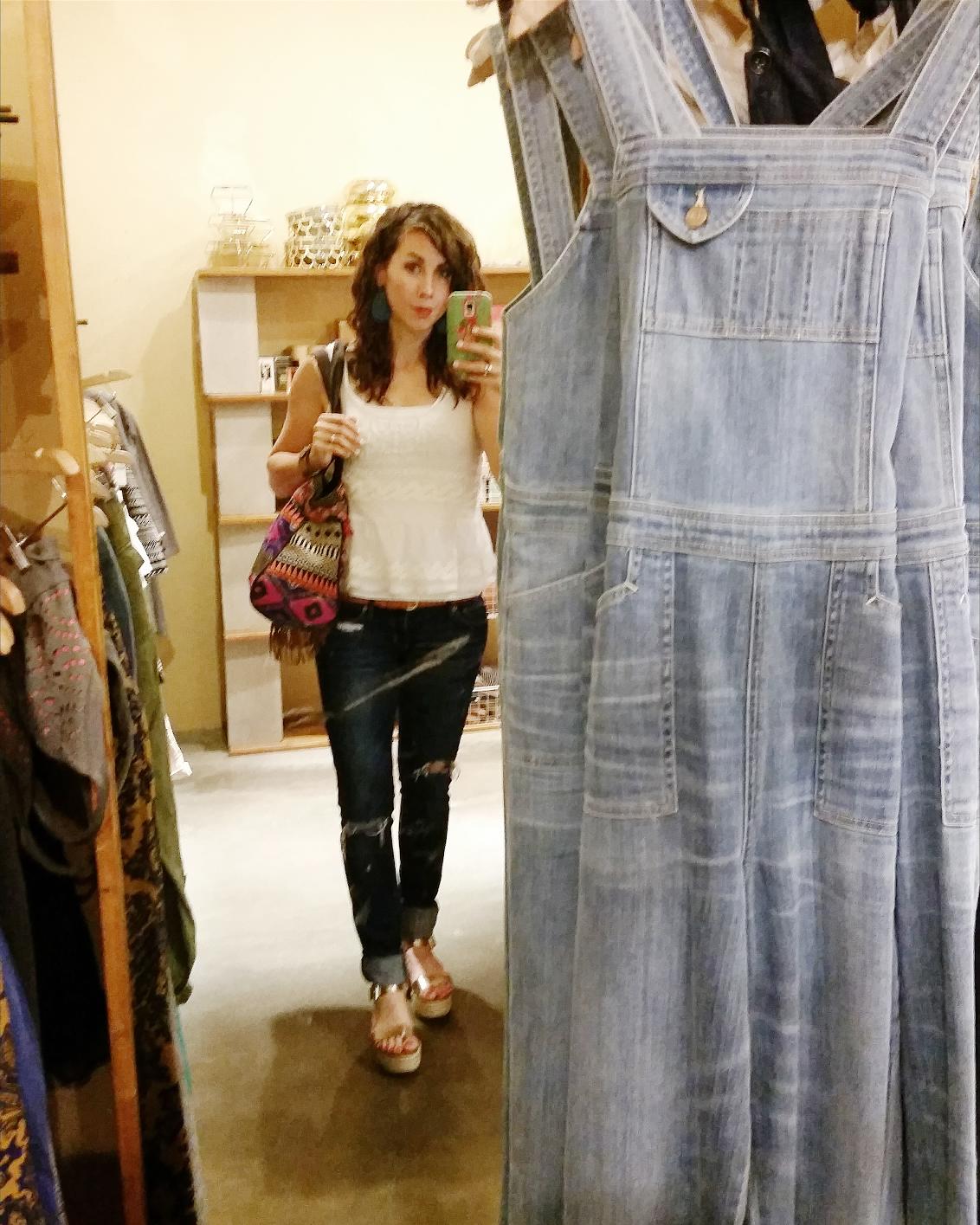 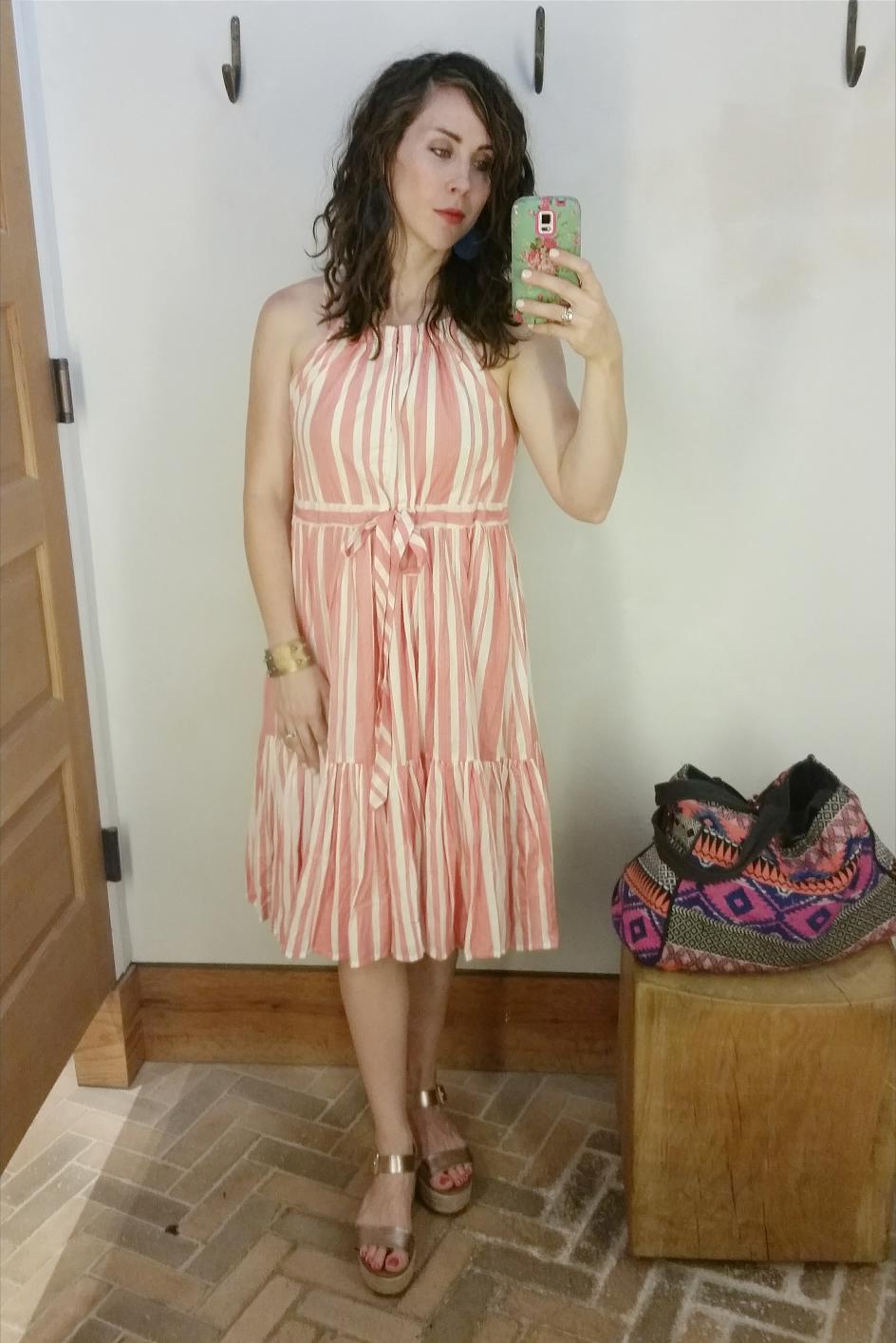 {This one came home with me. The cropped bell bottom overalls from above…did not}

Oh, and somewhere during the week, I attended two separate BODYCOMBAT+GRIT combos at a local gym, which, despite being exactly what I teach in Texas, felt considerably harder than usual (mayyyybe due to elevation, although I had been in CO plenty long enough to adjust, so most likely just due to my epic levels of slug-worthy couch-surfing + wedding burnout).

We capped off our trip with a visit to my Uncle Kris’s and Aunt Marilyn’s house (just outside of Denver), where they treated us to “Tacos in a Bag.”

Basically, you set out taco fixin’s + a bunch of mini-bags of Doritos (they used Nacho Cheese), and then you add spoonfuls of taco add-ins to the chip bags, shake them up, and eat them straight from the bag with a spoon.

It’s entertaining and quite tasty.

Note to all 8-year-old boys: there is no need to shake the bags so viciously that all of the (rather messy) contents eventually shoot out the wrong end of the bag, which pops open from sheer exhaustion/abuse. Not that that happened or anything.

The 18 hour drive home (to which I contributed a whopping six hours of wheel-time. Bless you, husband) was a bit of a beast, but we made it.

And there you have it, folks. One of the least eventful, and therefore most relaxing, vacations on the books to date.

Am I a total geezer for preferring low key family vacations? Maybe. Am I okay with that? Definitely.