Welp. I’m 25 weeks pregnant today. Which means it’s about time for another oh-so-fascinating check-in on how this little guy is doing.

Overall, I’ve felt bigger this time around (even though the scale, which I’ve only stepped on once, says I have gained the same amount of weight as I had at this point last time). Rounder belly earlier. Just generally more change in my body more quickly than I’m used to. I think my body is distributing things differently. Baby’s higher than usual, for sure. I’m usually a super low carrier.

P.S. I am NOT complaining here. Merely observing a difference between this pregnancy and others.

And, after looking back at my 24 week pregnancy update with Theo, I can definitely see a difference in my shape (not bad, not good; just different), so…I guess it’s good to know I’m not just imagining things? 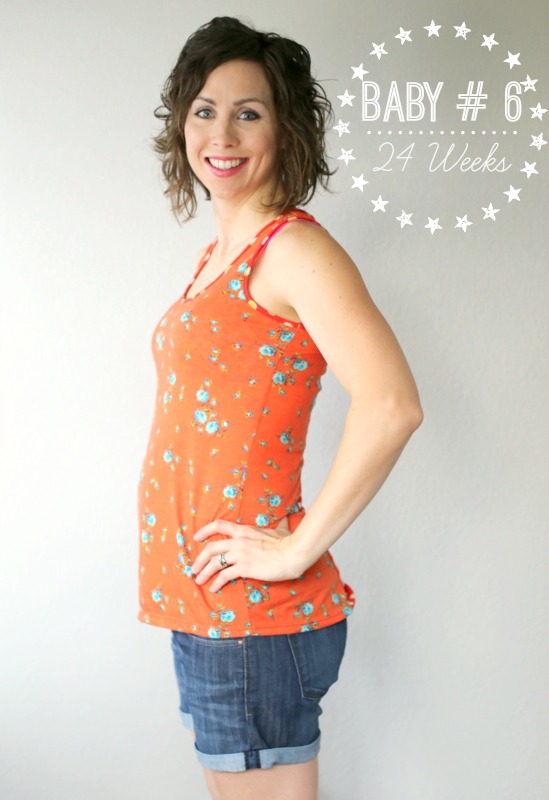 Considering that I started with the “faux-questionnaire” format last time, I guess I’ll just go with that again.

So, here are the answers to all of the questions that maybe no one has even asked, just in case you might possibly have been wondering.

How has this pregnancy compared to the others?

Hm…I guess I already sort of answered part of this with how I think my body’s reacting differently.

I touched on this in my recap of the first 20 weeks, but this has maybe been the hardest pregnancy yet (other than the twins’). More exhaustion, more nausea, more mood swings, more/worse varicose veins. Yippee! That said, I think I’m finally completely in the clear on the debilitating exhaustion and nausea front. I’ve only taken one nap (other than Sunday…Sunday naps are sacred) in the last month, and, in general, I have decent energy until bedtime. I’ve even had a burst or two of nesting but nothing sustained. As in, the piece of furniture I hauled upstairs that used to hold all of random toys (that I sorted, threw out, and organized the same day) is still sitting in the same place I left it over a week ago. Sigh. Baby steps (Ha).

Hmm…well, I thought he was super-wiggly and was a little worried that we had a hyper one on our hands, but Shaun claimed that I said the same thing about Theo (aka: Lil’ Chill Dude), and as I looked back on my 24 Week Update, it turns out he was right. I talked about Theo being a mover and shaker too. Which kind of makes me glad that I’m taking the time to write these. (Because aren’t we just so sure we’ll remember every little last detail, and then, no matter how hard we try to hang on, it all starts to fade? Good thing for labor. Bad for the rest).

Yup. 🙂 Although…I’m not stuck on the middle name, so we’ll see.

Are you still exercising/teaching fitness classes?

I am. I teach 6 classes a week, and Tuesday is fast becoming my least favorite exercise day of the week, since I teach Grit Plyo (think: squat jumps off of a bench, tons of burpees, jack push-ups, tuck jumps, etc.) and then BODYPUMP. Grit is exhausting in its own right, but halfway through Pump, all I can think is: are we done yet?

I’m already having to modify majorly in Grit (not Pump), but I’ve joked with my participants that, by the end, I’ll be sitting in a deck chair with a glass of lemonade calling: “JUMP! DROP! PUSH-UPS!” At least I think I’m joking.

Funny story: the other day, a new childcare worker told me, “This is weird, but I had a dream about you. You were, like, 9 month pregnant and still teaching…” at which point, I said, “Um, well, that part’s not a dream. I do that every time.” And she was like, “Whaaaat? No way! Oh, and then you went into labor.” And I was: “Um, yeah. That’s probably not going to happen, and even if it did, I’d probably just finish teaching the class, then go home, eat dinner, and do some laundry before I had the baby.” #darnslowlabors

Still planning on a home birth?

You better believe it! I’m not one to say never, but, barring some kind of significant change in my mindset/midwife situation/health, I think I’m going to be a home birth girl from here ’til there are no more babies to birth. I just love being in my own bed with no one prodding or poking me afterwards. No monitors. No nothing. Being able to eat/walk around/get in the tub/just generally do as I please during labor is pretty awesome too.

Of course, I have family that is willing to take my kids for a couple of days when the baby comes, so I’m sure I would be more enthralled with the hospital option if I didn’t.

I’ll be using Melena again (one of the midwives who assisted at the twins’ birth and then was the primary at Theo’s birth after my longtime midwife, Thalia, died suddenly from a stroke), and I’m super-happy to have someone that I trust so much assisting me again.

How have people responded to your having another baby?

Honestly? I’ve made very few “official” announcements. And, in the South, if someone doesn’t give you a big toe in the door to say something (you know, besides, “Bless your heart”), then you don’t necessarily say anything at all (well, to their face…ha!).

So, while my belly is growing by the day, I haven’t gotten just tons of comments, either good or bad. I think there were many weeks of, “Has Abbie just given up and starting eating bon-bons for breakfast, lunch, and dinner?” at the gym since no one much officially knew until we got back from Colorado. But now that they do, nobody much seems to notice.

Which is TOTALLY cool with me!

I think, maybe, by this point, it’s kind of obvious that this is just what we do. And everybody has, more or less, accepted that. Our family on both sides are very supportive of our having however many kids the Lord blesses us with, so we’ve never heard a peep of opposition from them (yes, I know; we’re very thankful). And I’ve actually gotten FEWER comments lately at the grocery store. I think part of this is because we only go once a week, which is one of the few times I run errands anymore with all 6 kids with me, and the rest of the time, I usually have little kids with me while the older ones are at piano practice or Softa’s (my mom’s) house.

WHATEVER the reason, I’m completely fine with the lull in comments. (They were pretty intense when the twins were babies and both in car seats; that was quite the attraction, apparently). On the one hand, they definitely give me an opportunity to share the Lord with people, so I should desire more contact, but my flesh would definitely prefer to just zoom in and out of Walmart without too many roadblocks along the way.

Hmm…maybe I should start praying for more people to stop and talk to us.

Um, y’all. It’s so embarrassing, but I am quite the snorer when I’m pregnant. I sleep on my side and everything, but, combine my–what? pregnancy sleep apneia?–with the cold that I’ve been fighting for almost 3 weeks now, and I actually feel a little sorry for my husband. He’s a pretty sound sleeper, though, and hasn’t resorted to sleeping on the couch yet, so I guess we’re fine.

And now it’s your turn.

If you’re pregnant right now, give me a shout out and let me know how far along you are, when the baby’s due, how many other kids you have, whether or not you snore…you know…the important stuff.

I’d love to learn more about you!

Did I leave out something that you’re just dying to know?

I can’t even imagine, but if so, ask away!