So sorry for the radio silence, y’all. I have been fighting The Cold of Death since Saturday, and I feel like I’m just now emerging from the fog of hacking coughs and congestion into something resembling normalcy. Yip-to-the-ee.

One of the questions that I have been asked fairly often over the past year or so is:

Do you still have outside help (aka: housecleaning help) in your home?

I have answered it here on the blog, but I know some of you are new, and (OF COURSE) not everyone reads every post, so I thought I’d answer it again:

No, we no longer have any cleaning help at our house. Nothing happened. Except that my kids got older and more capable of pitching in. I really feel like teaching them to be responsible for the home they live in is one of the best ways of instilling Biblical stewardship that I can convey to them, so when it became obvious that, between all of us, we were perfectly capable of handling the jobs that Teresa kept up with, we made the necessary adjustments (just FYI: by this point, Teresa had another job and had only been coming sporadically anyway, so it wasn’t a drastic change).

Teresa is our neighbor–a lady who had never been an “official cleaning lady” before but who needed a job when I needed some help. Shaun found her, actually, after I had a hormonal exhaustion fueled breakdown on the phone while he was gone on one of his (then) frequent work trips, and she was an absolute Godsend. She started working for us when I was about 5 months pregnant with the twins and continued until they were two…give or take. (I can’t remember exactly when she stopped coming). And she was wonderful because she did everything from helping me hang wallpaper to cleaning the refrigerator to the aforementioned laundry. She was a true renaissance woman, and I am so grateful for the blessing she was to us in a time when I had 5 kids, 6 and under, including twins. If I could, I would give the gift of House Help to every mama with little kids.

I answer the housekeeping question today because, as we clean, sometimes we need a little extra motivation to be excellent, and recently we have stumbled upon something that’s really motivating us to work hard.

For lack of a better term, I’m calling it The Penny System. 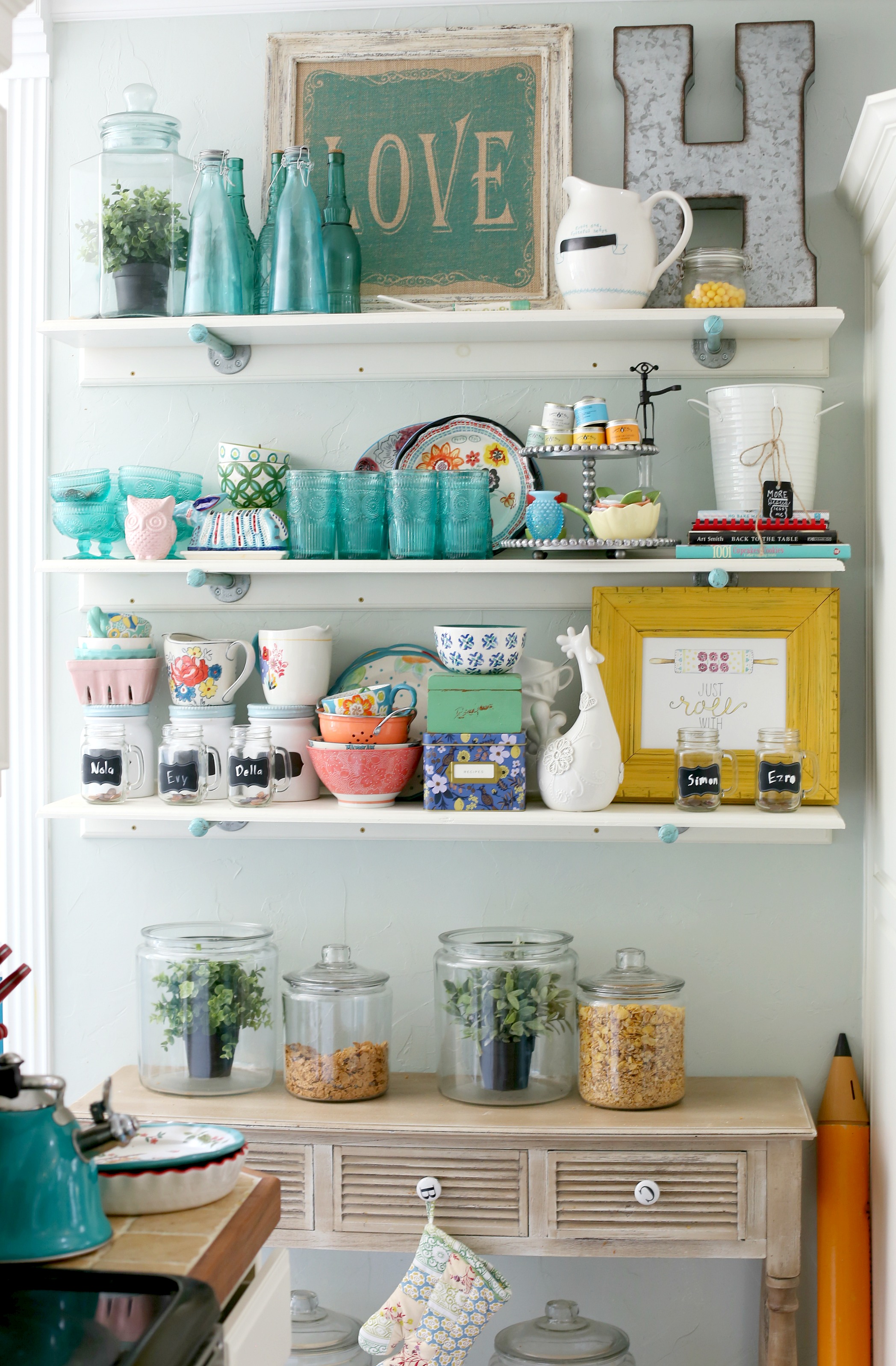 {See those labeled jars? Yup, they’re a big part of the system. Also, see that pencil? It’s actually a “piggy bank” that holds all of the pennies…except the ones we keep out for rewards}

And it’s ridiculously simple…because any time I try to put a complicated system into effect in my house, it fails. Every. single. time.

Well, Shaun had a big stash of pennies saved up. We had some cute jars with labels in the cabinets. Et voila!

A simple, effective system of reward (and sometimes punishment) was born.

Basically, we wrote (um, Shaun wrote…not my handwriting…although, I don’t know why I’m pointing that out because my handwriting’s not very good) all of the kids’ names (minus, Theo’s) on glass jars, and then we told them that, every time they did something that fell into a certain category of behavior, they’d get a penny. 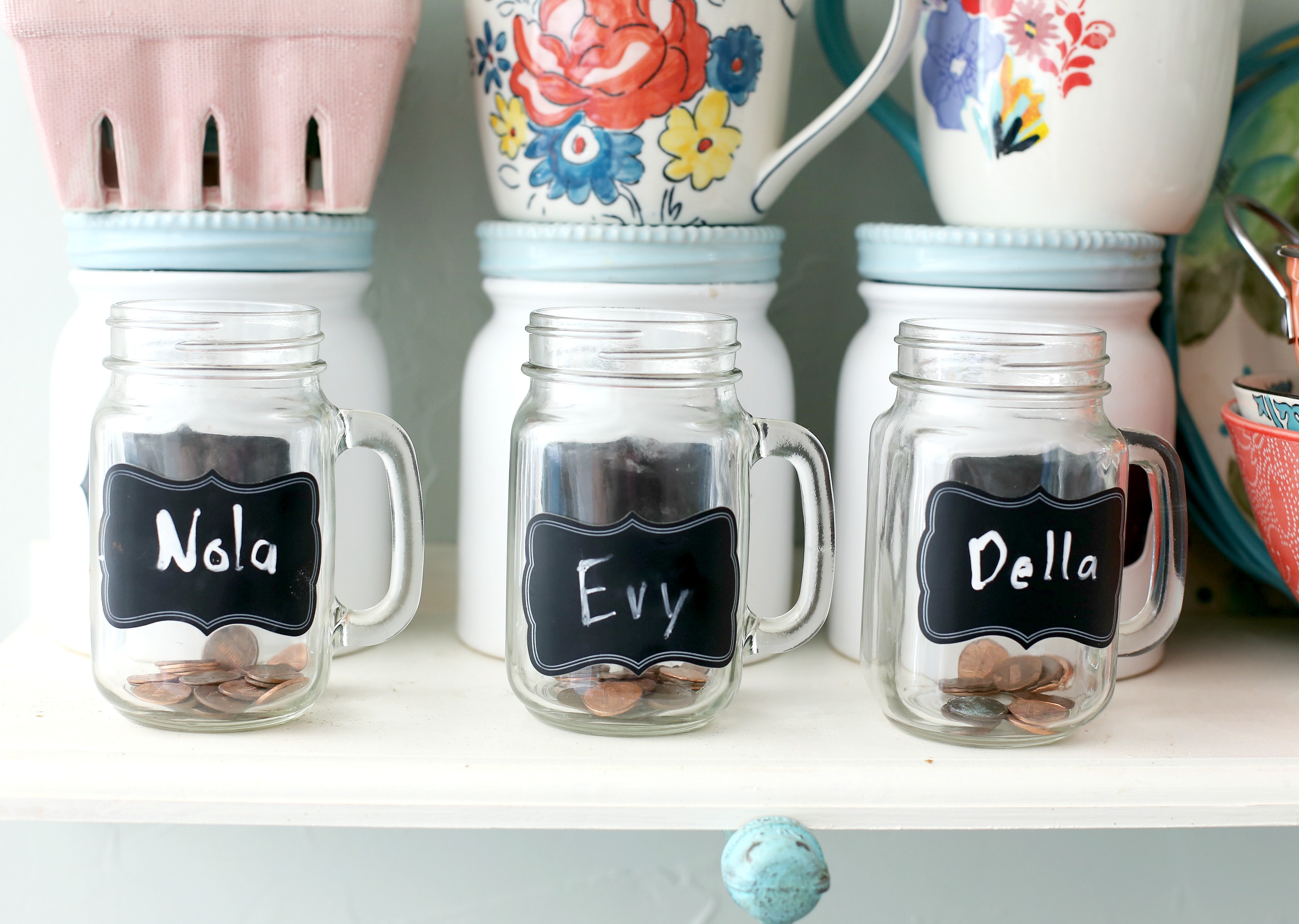 Of course, the little girls were all, “WHOOO! I get a money in my jar!!” Because they have no clue how inconsequential a penny is. But the older kids, while excited, were a little daunted by how many “good deeds” it would take to save up for anything worthwhile.

Until we told them that the pennies themselves are not spendable. Instead, they are to be used as tokens, which can buy privileges. For example, the other night, both Ezra and Simon paid 2 pennies apiece to stay up 10 minutes past bedtime to play Rat a Tat Cat (totally fun card game…highly recommend) with me and Shaun. 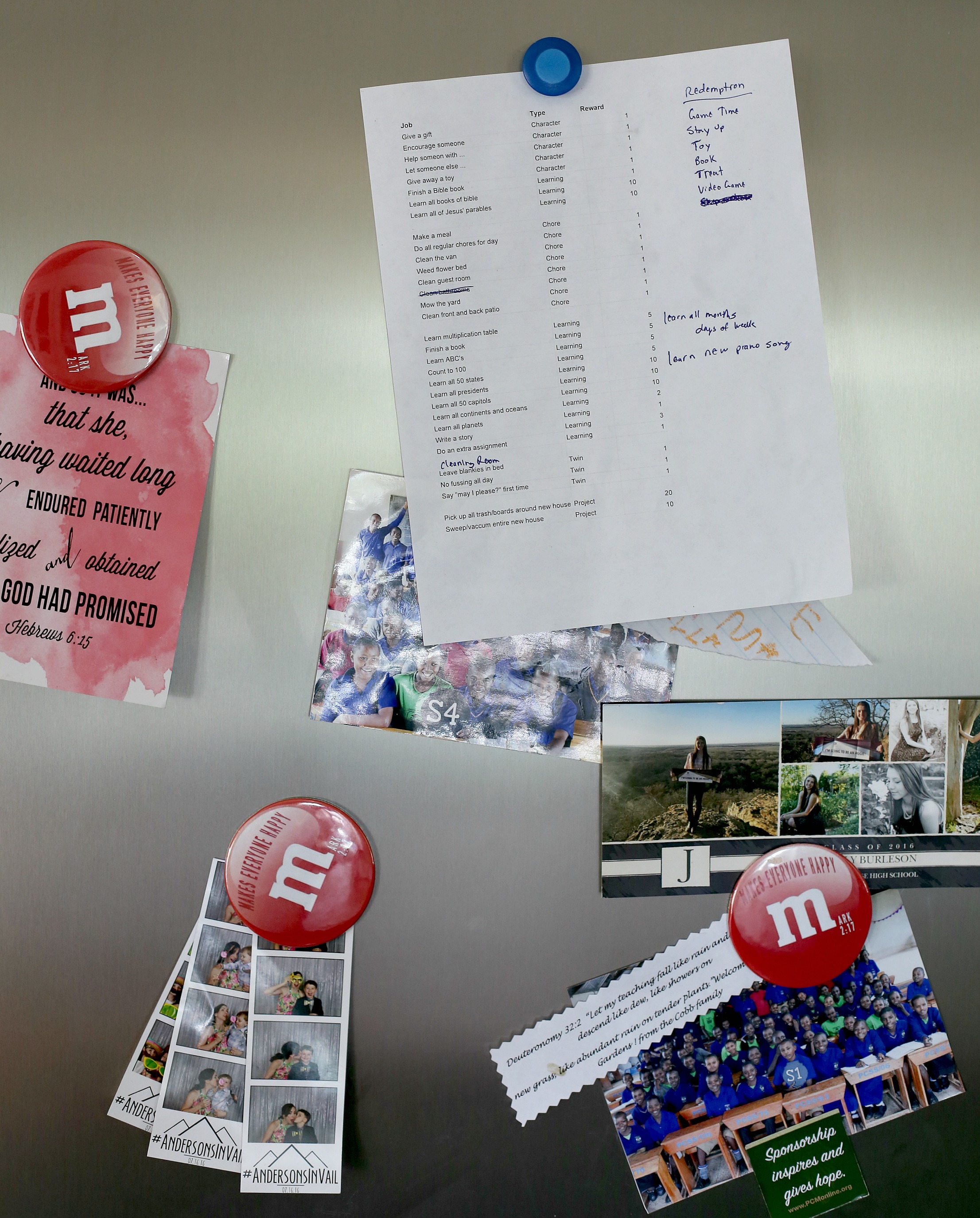 (I doubt you can read this, and it’s hardly an exhaustive list, but that white paper has the gist of our Penny System tasks and rewards on it).

To earn those two pennies, they did something out of the ordinary from their usual list of chores (for which they are compensated in actual money).

Shaun made a quick list of categories and possible actions that could earn pennies (usually just one, but sometimes several).

Some are attitude related (helping without being asked with a cheerful spirit) and are somewhat arbitrary as to whether they are rewarded or not. Simon changed Theo’s diaper the other day without being asked (not something I have him do normally anyway), and you’d better believe he got a penny for it. But then, he wiped up a spill in the middle of dinner without being asked and did not. Both were thoughtful gestures, but as much as we want them to feel motivated to go above and beyond, we also don’t want their desire to help to be fueled solely by an expectation of reward. More often than not, when they do something unusually helpful or kind, they do get rewarded, but they know not to complain (and don’t, actually) about the times when they are not. (Because the fastest way to lose your penny is to complain).

Other categories are more straightforward. For example, Ezra, Simon, and Della have all received 10 pennies for memorizing all 66 books of the Bible. It was on the list. They did it. They got their prize.

The twins are only 3 (almost 4, though!), so their pennies usually come from attitude-related tasks. I mentioned that we work hard to encourage respectful speech. But the twins just weren’t doing a good job of asking without pretty much demanding whatever it is they wanted.

So, we explained that they would get a penny every time they said, “May I please,” instead of “I want.” We’ve been at this for about a month now, and although they’re not perfect yet, they’re better. And if they don’t ask correctly the first time, they almost always correct themselves without being prompted.

Not only that, but as we repeat the same positive actions over and over, everyone is getting a little better about looking for ways to be extra-helpful with a good attitude.

The thing I love the most about it? (Other than the results). I don’t have to hunt for a marker or order a chart. I don’t have to buy stickers or keep up with rows. It either happens or it doesn’t. And, as they “pay” us for their privileges, we are even recycling our “tokens,” which means that the system has a lot of long term potential.

I realize that, if you don’t have a lot of pennies lying around, this isn’t ideal for you, but you could use anything from paper clips to buttons instead.

I do think the penny idea is kind of genius (especially for little kids) just because we’re dealing in actual money, but I’m sure the system could work for a variety of circumstances with a little bit of tweaking. 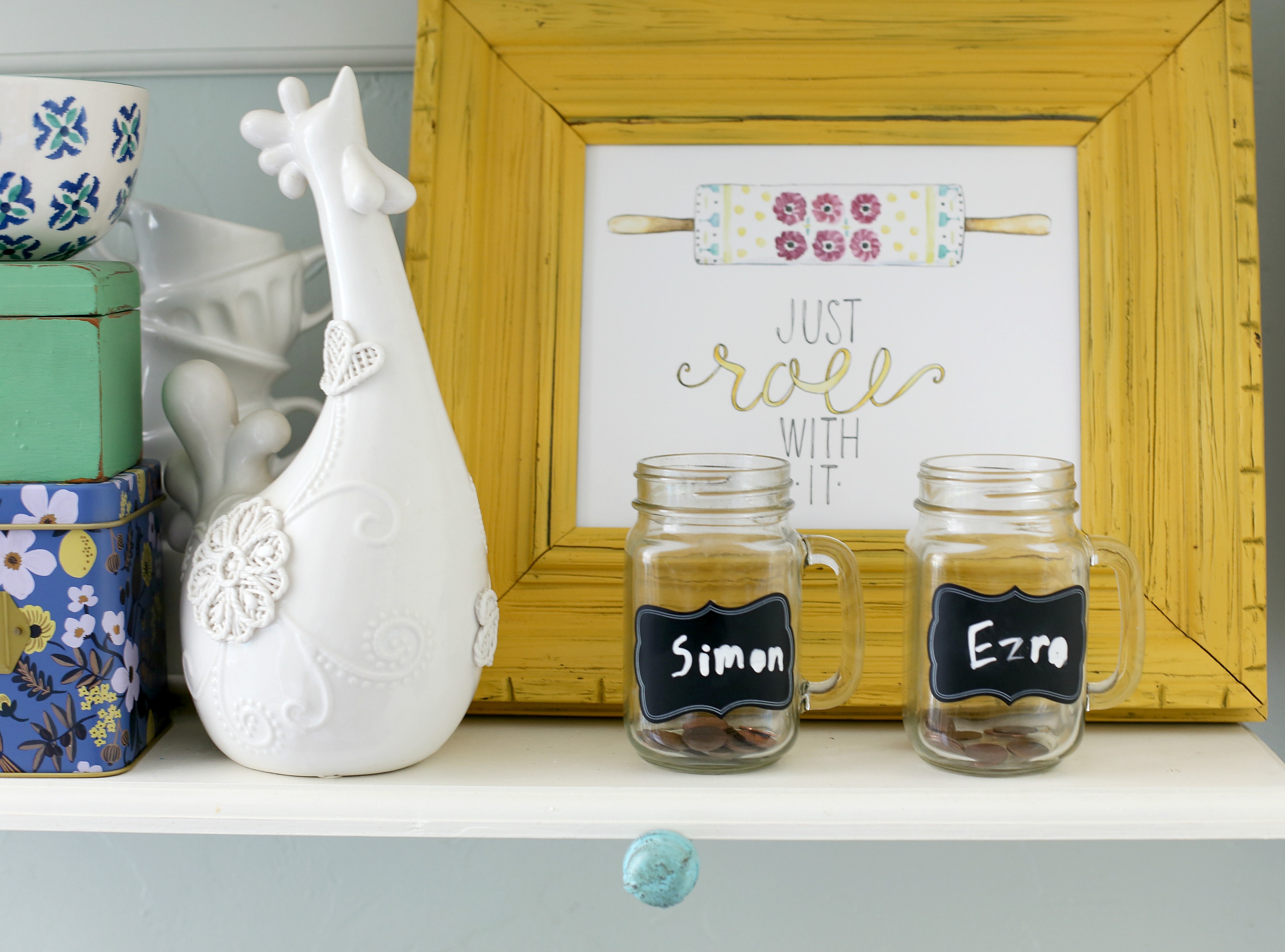 Anyhoo, I just thought I’d share something that’s actually working for our family to make us extra-mindful of caring for our house and each other.

And I’m also thinking I’d be a whole lot more motivated to go sort the laundry if someone were going to put some pennies in a jar for me.

Anybody? Any…okay fine. I’ll just go do it. (Apparently, I need to work on the attitude aspect of this whole business).