I almost titled this post something SUPER cheese-fest like, “Lighting deals so good, they’re scary.” But, considering that we are kind of the opposite of the Halloween Family,  I think that’s just the influence of all of the marketing ad banners that keep popping up as I’m doing the research which now brings you said amazing lighting deals.

But let’s back up a bit and talk about my nasal passages for a moment, k?

What? EW, Abbie. No! Why would we want to do that?

It’s a fair question, but I just really feel like I would be remiss if I didn’t reiterate what I said last week (aka: the last time I actually mustered the energy to post…I know…I’m the worst), and that is: this is THEE worst head cold I have ever had.

I’m on Day 12, and, while I would consider myself technically better by this point, certain symptoms (I’ll spare you the details since I’ve already used the phrase “nasal passage”–twice now–in this post) are still lingering. I still sound like death, which is oh-so-fun for my fitness class participants. But I no longer FEEL like I will meet my Maker at a moment’s notice.

I shudder to think what kind of pestilence I would have ended up with if I hadn’t faithfully dosed myself with: garlic, apple cider vinegar, essential oils, honey/lemon, and Vitamin C and Echinacea. But dose myself I did.

And I’m still here to tell about it. And keep on telling, apparently

So! This post has nothing to do with coughs and sniffles, so let’s just move right along, shall we?

I’ve mentioned several times that most of my research for the new house has consisted of online sources. Which…is tricky, since you can’t see or touch anything for yourself. Still, if you stick to well-reviewed, trusted brands and pay attention to dimensions, you’re fairly likely to end up with what you were expecting. (Emphasis on the word “fairly”).

I’ve had several people ask me about lighting sources–especially of the barn light/industrial variety–so I thought I’d put together a little round-up of some of the best-looking, most reasonably priced lights that I’ve found in my travels across the wild wastelands of the world wide web (sorry, I’ve been grading high school English papers at our homeschool co-op, and I have alliteration on the brain).

Most of these are options that I’m either seriously considering or have already ordered for the new house, but almost none of them have arrived yet. I’ll update when I’ve seen them in person. 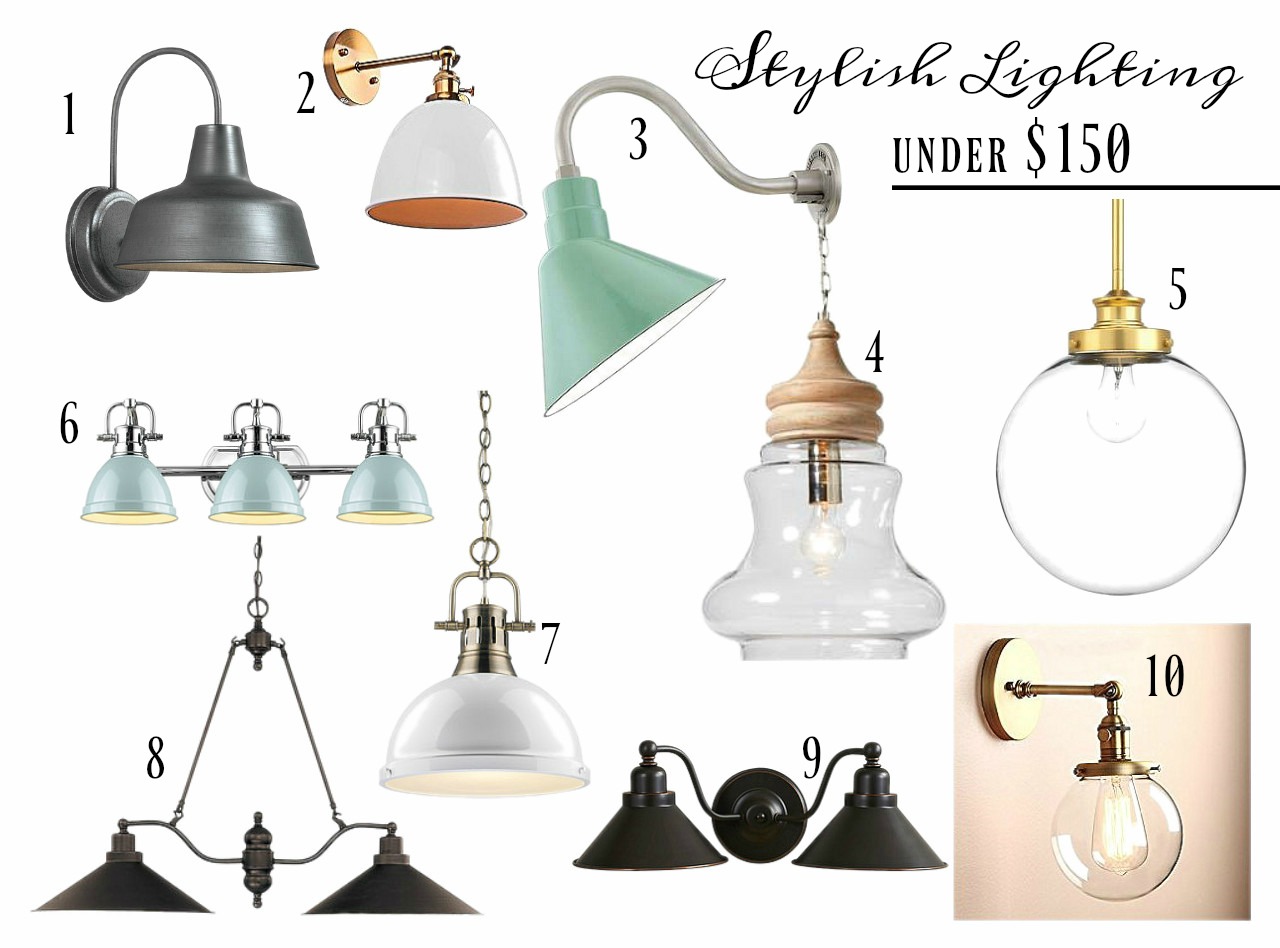 1. I have seen these galvanized wall sconces  from Lowe’s (they come in a medium and a large size and cost $30/$40 respectively), and I have to say that they look MUCH better in person. The picture up there makes the silver look muddy and dull when, in reality, it has a nice weathered sheen. I am using 3 of these in the boys’ bathroom by their mirrors.

2. I’m ordering no fewer than 5 of this Swing Arm Sconce

and hoping for the best. The reviews are good. And I haven’t found anything nearly as close to this pretty in this style for this price ($44 with Prime shipping).

3. This seafoam beauty is one of the pricier options on the list for a single sconce at $125 (well, that’s  build.com’s pro pricing, since we have a builder account, so I think they’re a little more normally). But they’re also one of the most unique. I don’t have a specific place in the new house for one of these…but only because I can get such better deals on something kind of, sort of comparable. The shade is 10″, though, so they would make quite a statement if you had a spot for them.

4. I get asked all. the. time where the lights over my kitchen island are from. Well, the answer is Grandin Road, but the BEST PART is that all of three of the glass pendant styles that I have hanging over the island are on MAJOR sale, and there’s a 30% off code (FRIENDS16) you can stack on top of that right now. Which makes them ridiculously cheap! I just bought 5 more to put in various rooms in the new house that need a single hanging light that still creates a decent glow. Seriously, if you’ve considered these lights before, run grab one before it sells out. Especially since you’ll be getting them for $30-$40 when I’ve seen them elsewhere for $120!!!

5. I love the simplicity of this brass/glass globe pendant, although I do wish it cost less than $100. Still, at 12″, it’s a fair bit of light to work with, and I’m seriously considering it for the downstairs main bath.

7. Likewise for this industrial pendant from the same brand that I’m seriously considering 3 of for over the kitchen island. Joss and Main has them for $104 (they’re big!), which is almost $100 cheaper than anywhere else I’ve found it. The white and aged brass pictured here is currently out of stock, but they’re supposed to get it back, and there are other colors to choose from.

8. Contrary to what you might think based on the picture, this over-the-island pendant is BIG. Like 40″ across, with 16″ shades on those lamps! It would make a huge statement for very little money ($100). I actually seriously considered getting two of them for our island and painting them or changing the color with Rub n Buff, but I think I want something with a little more bling.

9. I did jump all over this $35 (!!!!) vanity light like a duck on a June bug, though (to give you a point of reference for how good of a price this is, Amazon has it for $55, and they’re the next lowest price). I got three–two for the master bath and one for the downstairs half bath–and I plan to paint all three. They are 20″ wide, and the shades are good-sized. Even though I’m going to paint mine, if I liked oil rubbed bronze, I would certainly keep them that way because they look much more expensive than they are. (They’re currently out of stock, but it says they’ll be getting more).

to go beside the girls’ mirrors in their bathroom vanity. I love that they’ll add sparkle and lots of light without breaking the bank ($50 each). (A similar light from West Elm or Pottery Barn costs 2-3 times as much).

A couple of honorable mentions:

After months of watching the price go up and down, I ordered this blue beaded chandy from All Modern (which is the same as Joss and Main and Wayfair, in case you’re wondering) when I noticed that they had a clearance/returned version (just one!) for $55 less than the lowest price I had ever seen it go. 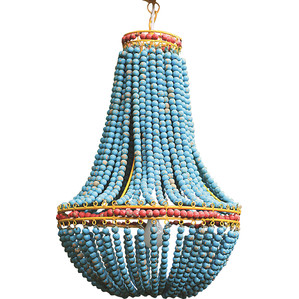 It’s more for looks than anything, since it only has one bulb, but there are other light sources in the room, so that’s okay. Oh! And just in case you find yourself compelled to order it too, be warned that the chain (which you can’t see in the picture) and all other metal on this light are YELLOW. Like canary yellow. I will definitely be toning that down with a DIY. Otherwise, it’s a really fun, big light.

Also! I have not ordered this light because I have no need for it, but man, is it pretty! 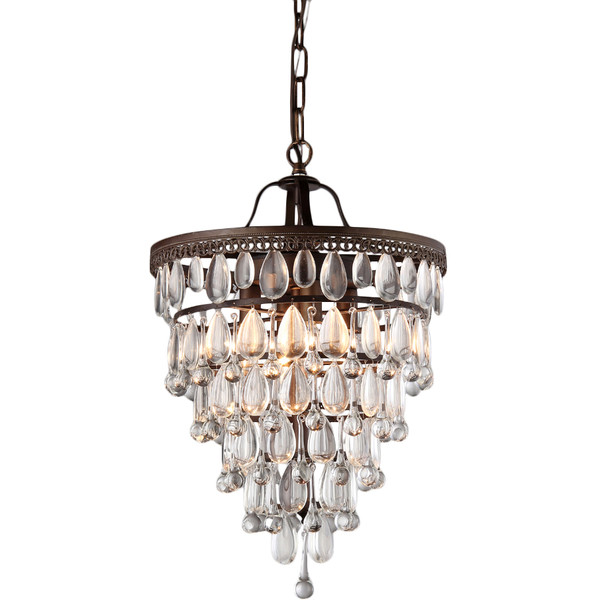 And finally, we have the dark horse. 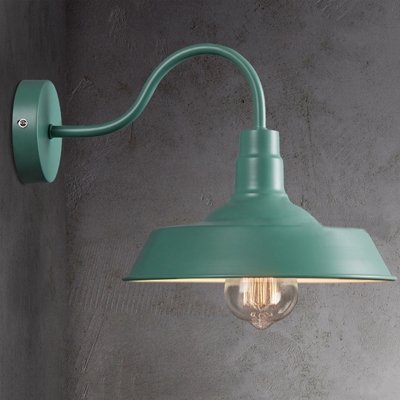 for the three spots we’ve designated for sconces  above the kitchen sink. But I didn’t include it in the collage for two reasons. 1) For some reason, Olioboard (the program I use to create inspo boards) wouldn’t let me add the image, and 2) even though it’s an AH-mazing deal (only $32 for an already funky-color painted 10″ barn light…practically unheard of)–or maybe because it’s such an amazing deal–it’s shipping through Amazon from a Hong Kong based company I’ve never heard of. In other words, I’m going to order 3 of these and then forget that I did it because they won’t show up until Christmas…if they ever do. I figure it’s worth the risk for the price, though, because all of the comparable ones I’ve looked at are LITERALLY 10 times the price, y’all! And apparently, our credit card will cover us if we get completely shafted. Or at least that’s what my finance-savvy husband says.

There you have it. I have seen the light(s). And!!! Best of all, between this list and some craigslist/facebook swap finds over the last 6 months or so, I’ve already knocked out 90% of the new house list!

Whoop! I told you figuring stuff out and calling it done was my favorite!

So, now it’s your turn. I still have a light or two to snag. Namely something large-ish for both living room and “big room” upstairs. Hit me with any brilliant (ha) suggestions you have!