But we didn’t go to Charleston either.

So, yes, I’m still alive, for those you that were worried. (Thanks for the sweet messages, by the way).

Okay. So, that’s a bit on the dramatic side, but I am on day five of thee worst head cold I think I’ve ever experienced. Couple that with the fact that there has been almost zero margin for rest the last four days (Monday: Homeschool co-op all day, Tuesday: all-day appointments + gym classes, and Wednesday: homeschooling, house-cleaning, and more gym classes, yesterday: the same), and I have been collapsing on the couch as soon as I get home and staying as still as possible, until dragging my aching body to bed every night. This morning, I finally woke up feeling a little more like a human being instead of a walking zombie, so praise Jesus for that!

ANYHOO, there’s no way to know just how coherent this post will be, but I thought I’d give y’all an update on what we did do to celebrate the super-monumental event of my turning 34-whole-years-old.

We were waffling back and forth until the last second on whether to chance Charleston, but when they started evacuating folks, and the airlines declared a weather advisory, that pretty much made the decision for us.

Thankfully (for us, not for Charleston), because of those two things, both our Airbnb rental and our flights were refunded (or at least credited, in the case of the latter), so it looks like we’ll still get to go. Just not quite yet.

My sweet mama was cool with keeping our kids anyway, so we headed to Dallas last Wednesday to do exciting things like eat Thai food, sleep on clean sheets we didn’t have to wash, and check out tile stores and bathroom faucets.

I know. What party animals we are!

But seriously. After months of go, go, going for our family, it was such a relaxing, rejuvenating 48ish hours with my man.

Before we ever made it out of Tyler, we stopped for lunch at The Grove. 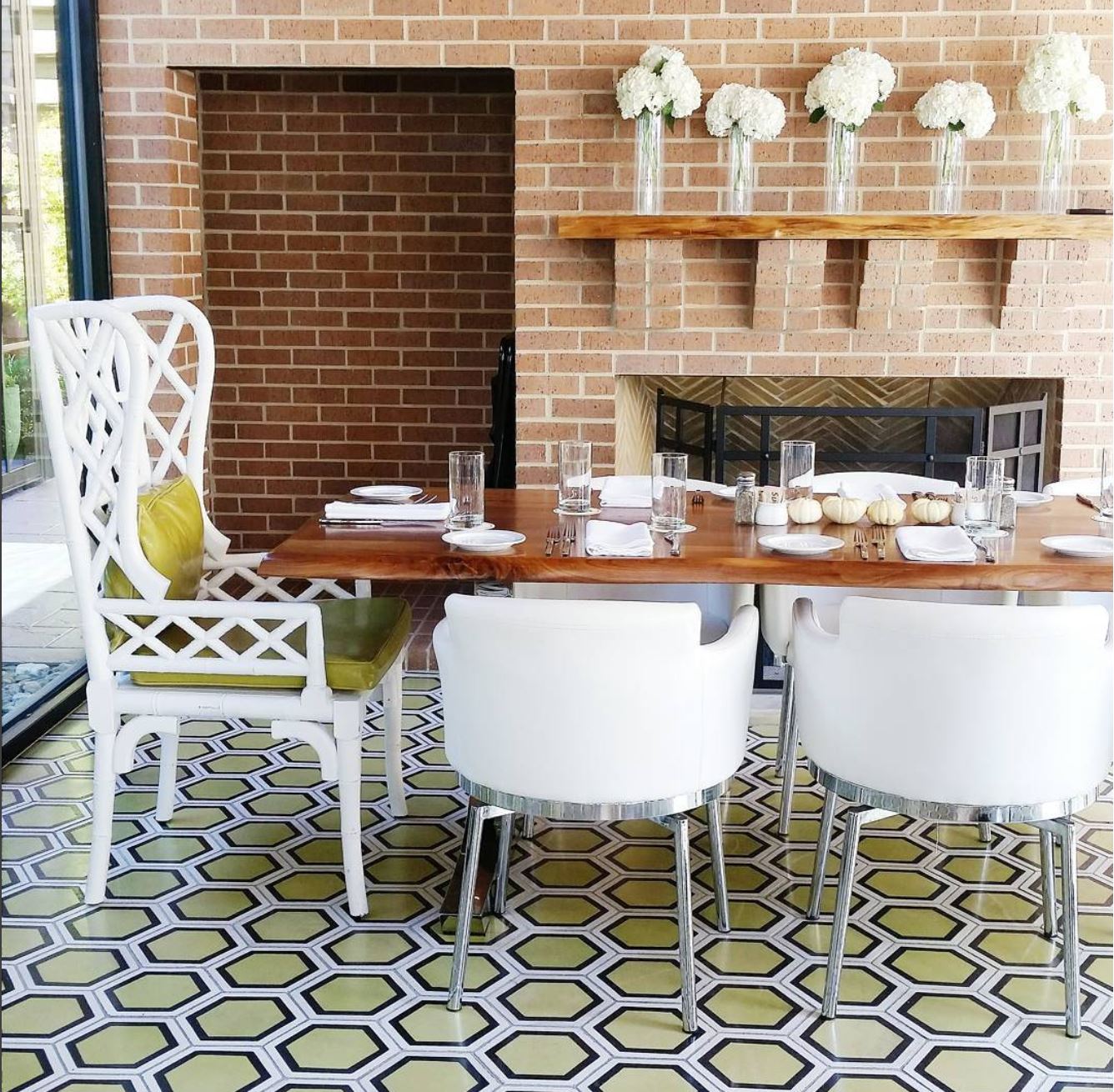 I’d heard good things but had never been, and I was pretty blown away by the rad interior design. They put some serious thought and effort into getting everything just so. 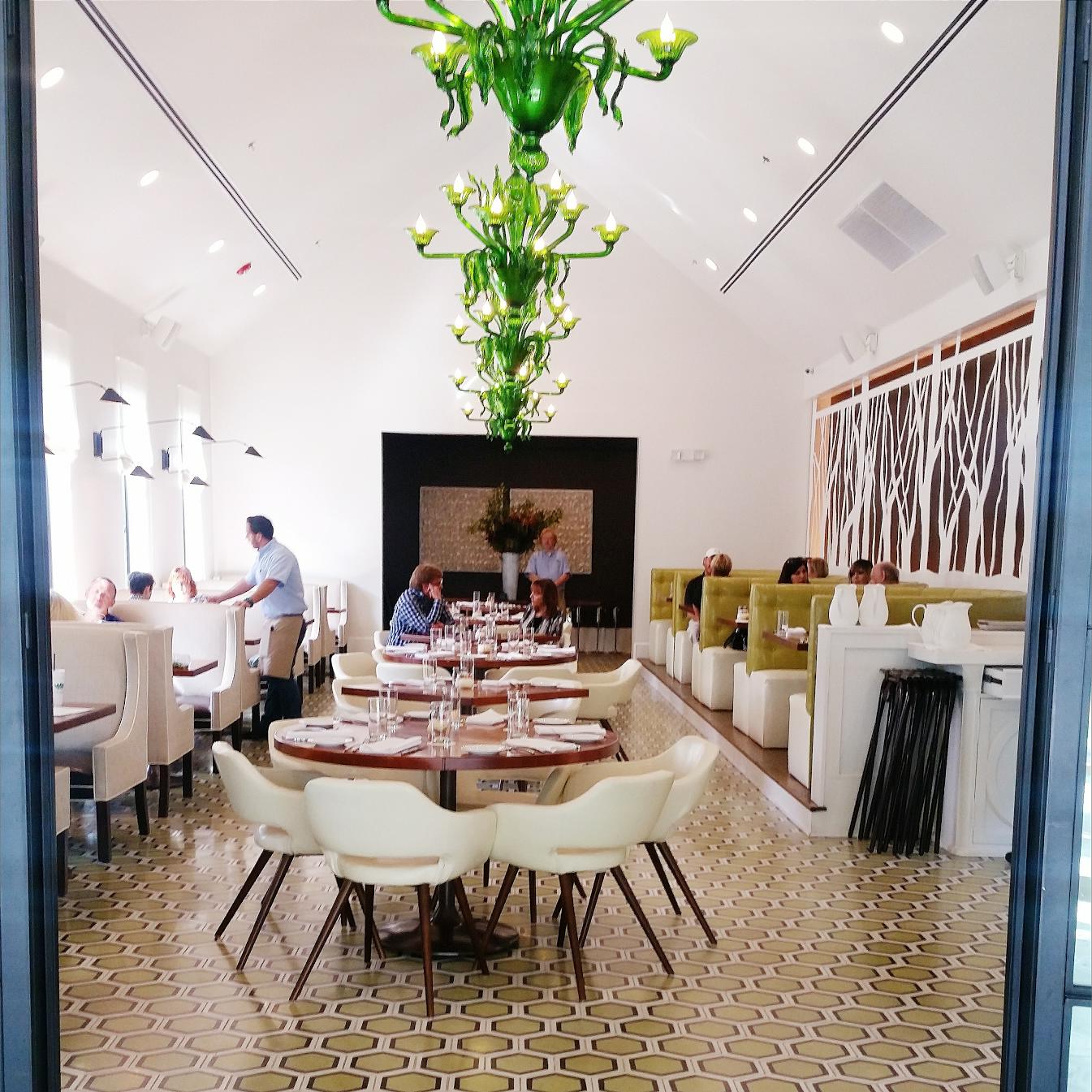 {Those chandeliers made us think of alien vegetables, which…normally wouldn’t be a good thing; but it totally worked in this space} 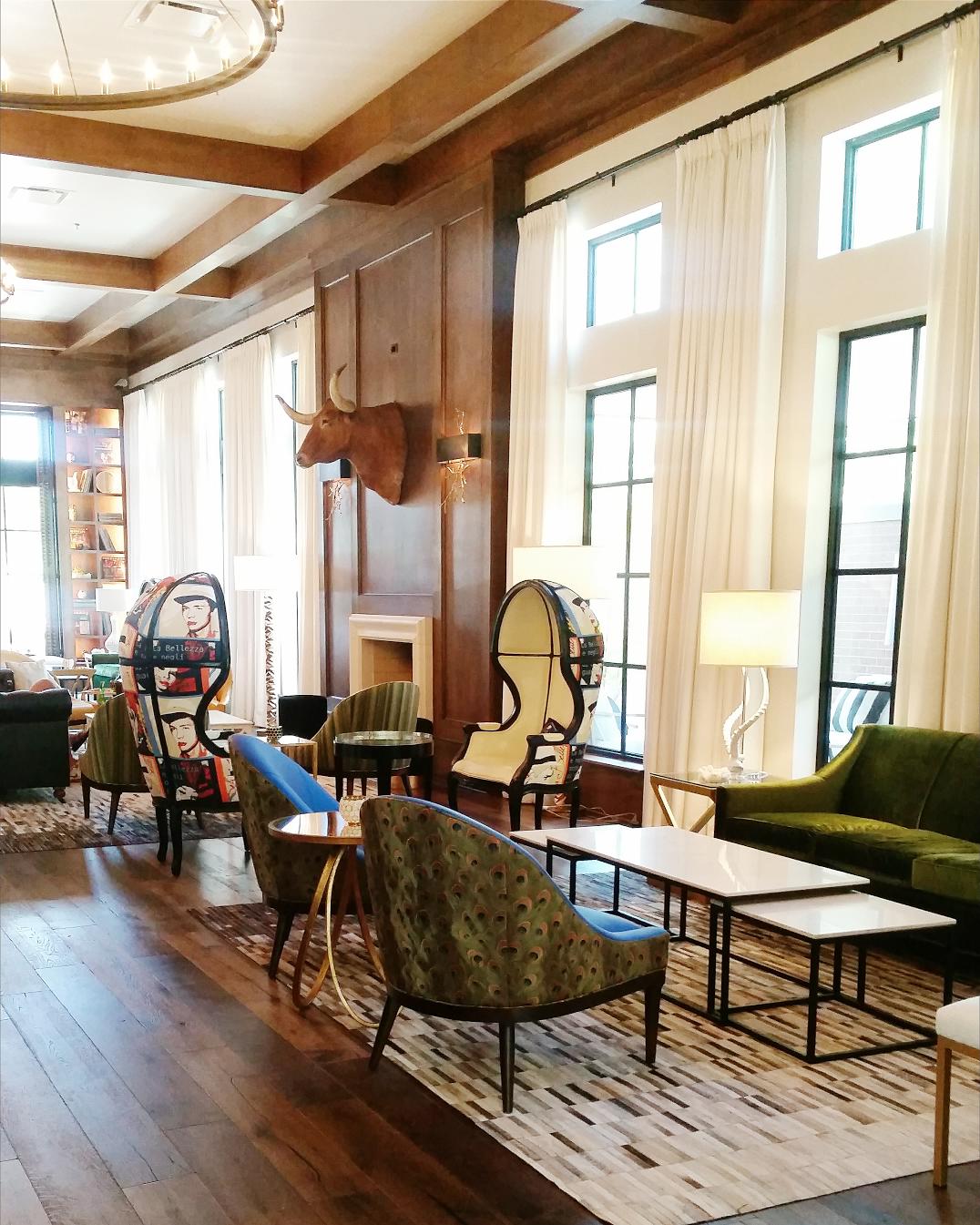 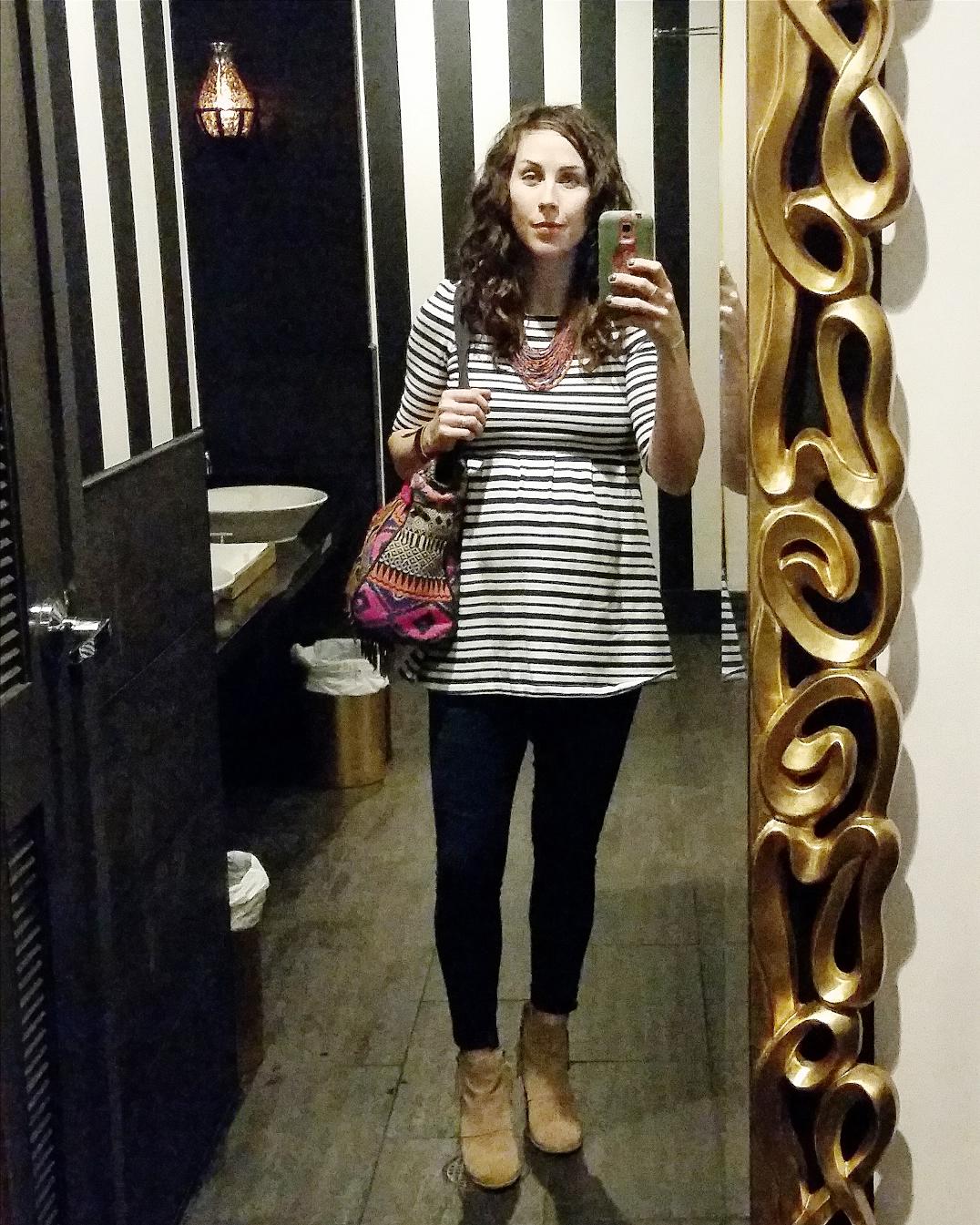 {Aren’t you just so thrilled that I managed to capture this creepy down-lighting shot?}

Thankfully, the food was just as yummy as the decorations, so I left a very happy pregnant lady. 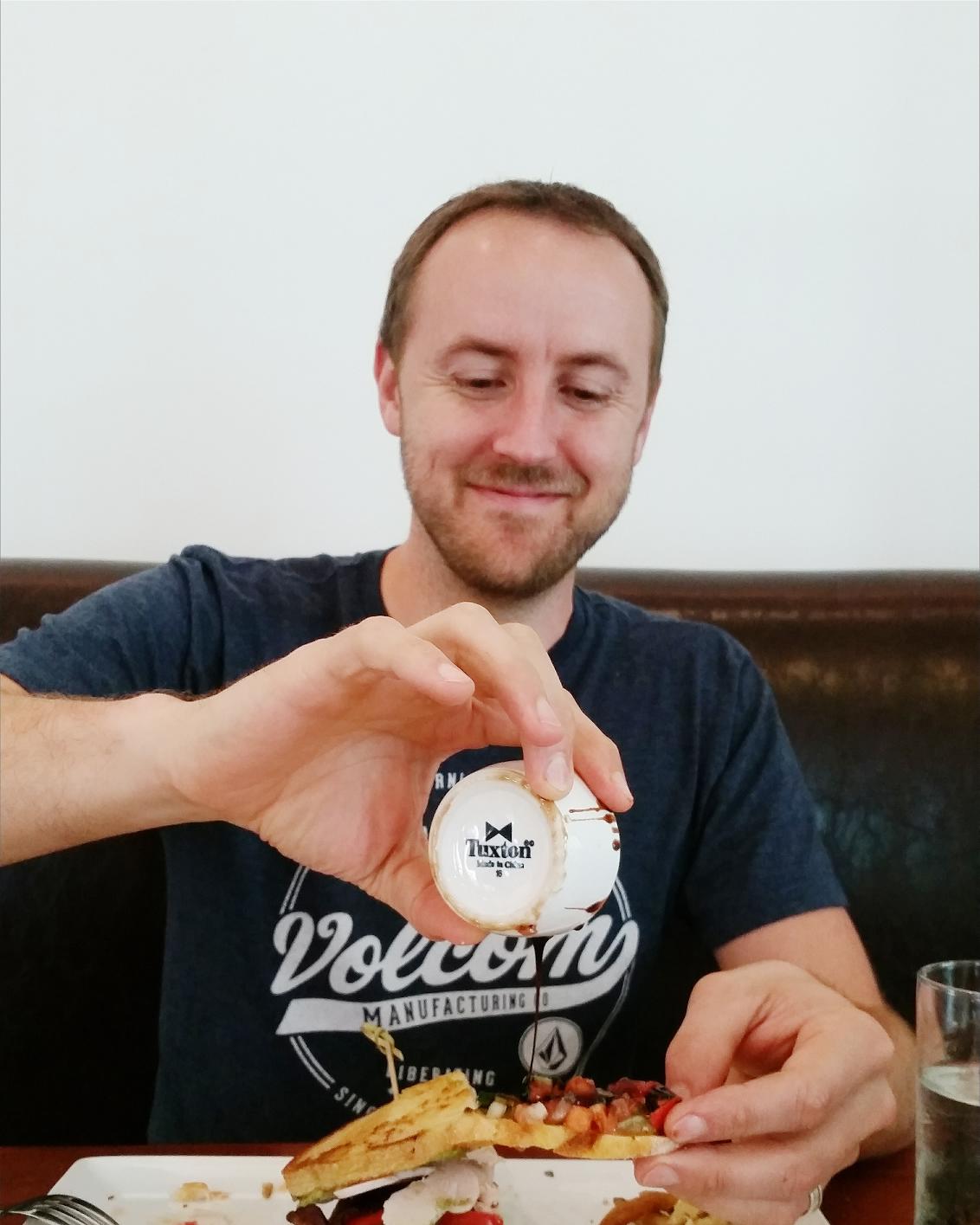 On our way to Dallas, we stopped by Paul Michael, a big warehouse style decor store in Canton, Tx (home of the famous Canton Trade Days, in case that name rings a bell) and wandered…then wandered some more. 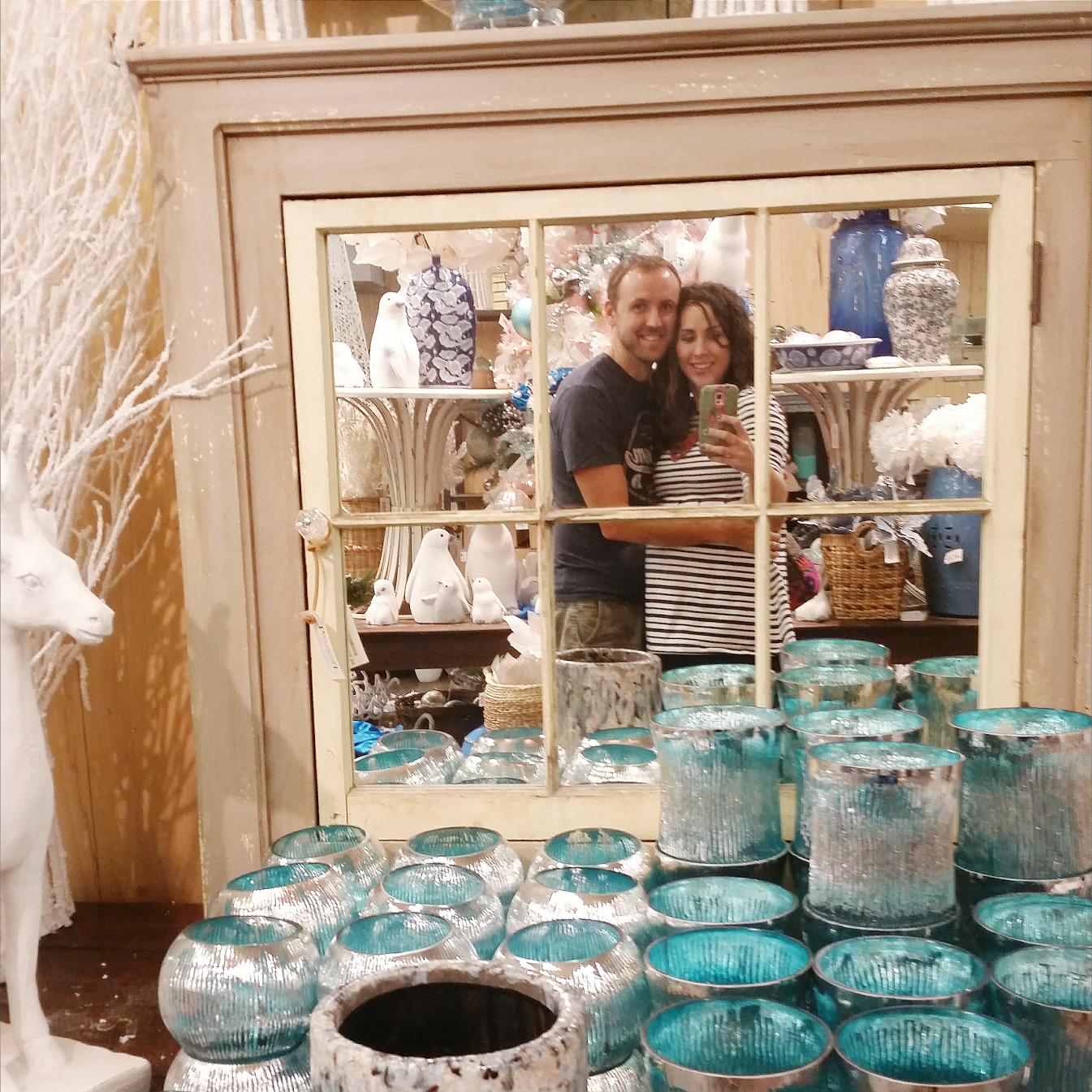 We didn’t buy anything, but I was sorely tempted by a 1/2 off giant pedestal table (that still cost $600…nope). It was a fun little jaunt just the same, and at least a chunk of the wandering was due to Shaun’s having to take phone calls (more on that in a minute), but I certainly wasn’t complaining.

That night, we ate the aforementioned Thai (if you’re in Dallas uptown, check out Malai Kitchen—SO good), watched a movie (Queen of Katwe…it was good! Not life-changing, but sweet and clean and well-acted), and ate some super-tasty gelato (can’t remember the name of the place, but it’s right beside the Magnolia Theatre).

I mentioned Shaun’s being on the phone a lot. So, remember all of those flooring samples I showed y’all?

We found a (much) better price online for the laminate (yup, we took some home, made a little mini-“floor” and tested it out for a week and reeeeeeally liked it) than the local place, but I asked Shaun to contact the local guy before ordering, since he had been so helpful, had already spent over 3 hours with me, and I wanted to at least give him a chance to make the sale.

Shaun did, and what ensued was a two-day-long bidding war between the online guy and the local guy for our business. It actually got a little comical toward the end, and Shaun was pretty much completely stressed out and wishing it were over by the last 6 calls or so…

The fairy tale ending is that 1) we ended up going with the local guy because 2) he MATCHED the crazy-low price the online store had dropped their already crazy-low price to (assuring us that he was still making money on it) and agreed to store it for us until we need it, AND 3) because my bro and sis-in-law were also ordering the same laminate in a different shade for the house they’re building (hence the bidding war; it was a big order), we saved $$$$ between the two of us on flooring that was already very reasonably priced and which we were fully prepared to pay the online price for in the first place. Praise the Lord!

Thankfully, it wasn’t all phone calls and negotiations, even as exciting as the outcome was.

My actual birthday started out with a trip to The Boulangerie in Greenville Ave. for breakfast 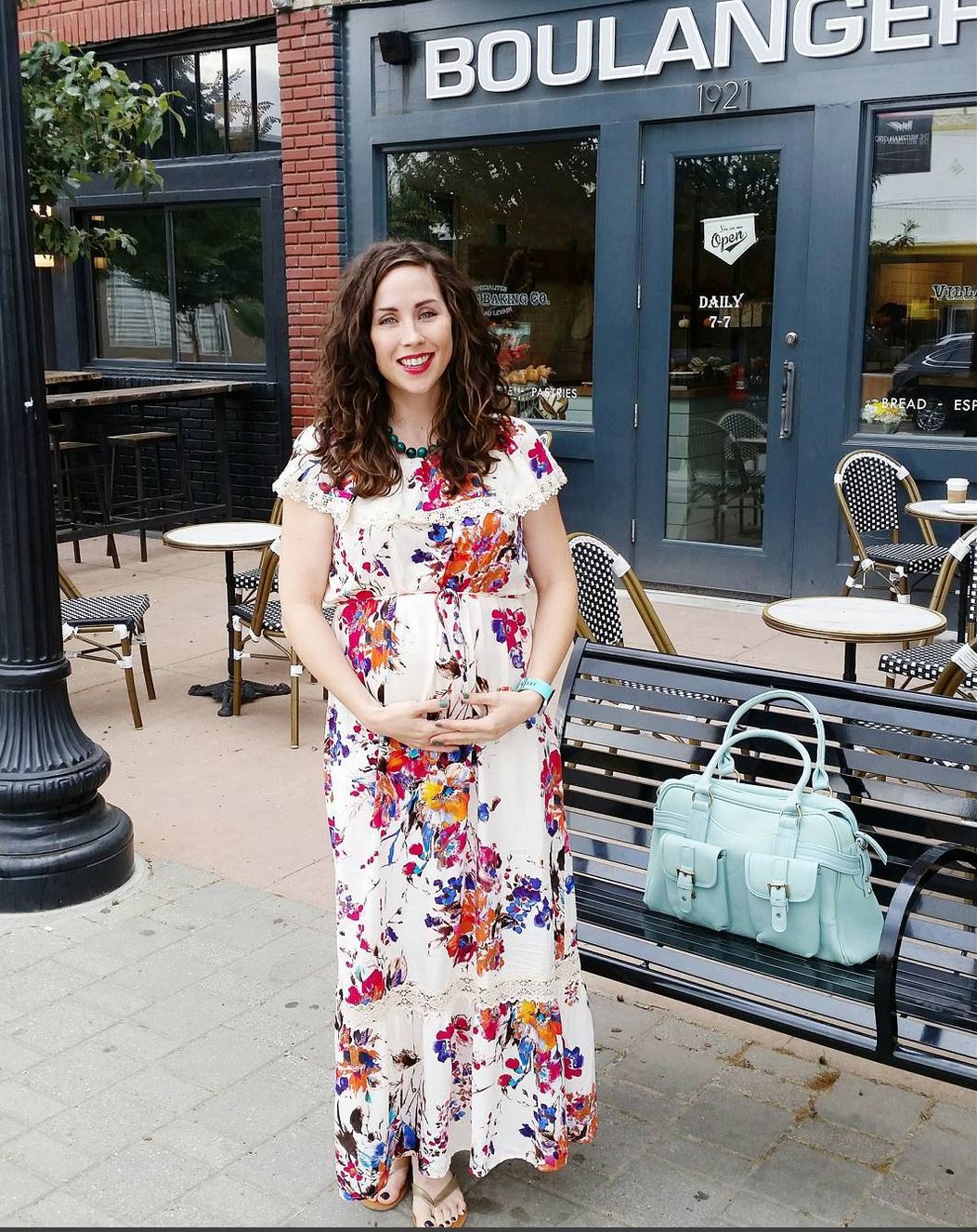 They have amazing croissants! 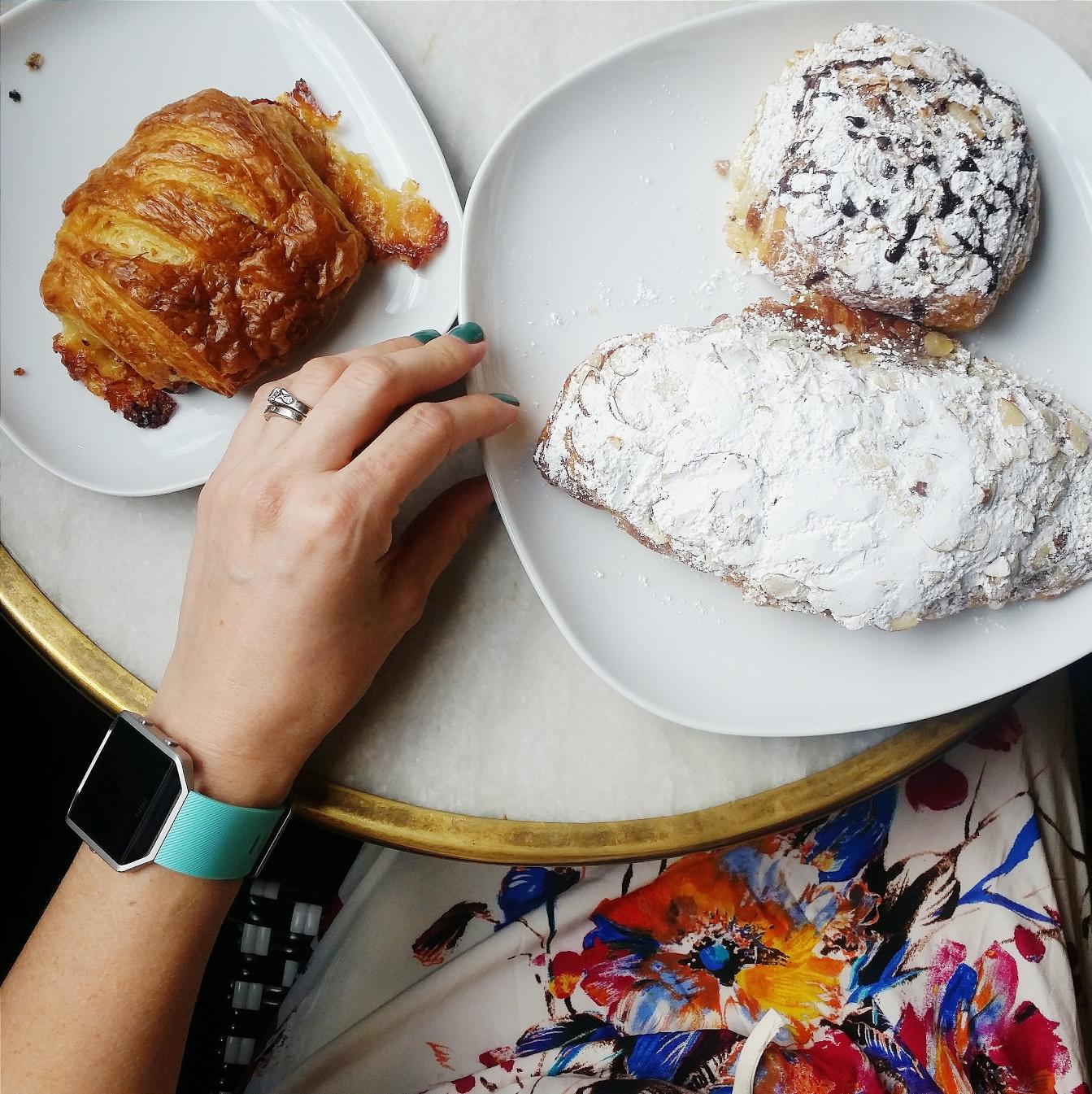 {Shaun got me a Fitbit Blaze

–complete with an aqua band, of course–for my birthday; the better to track just how many steps it took to burn off all {okay, my half} of those pastries)

Plus, their decor is such a feast for the eyes as well. 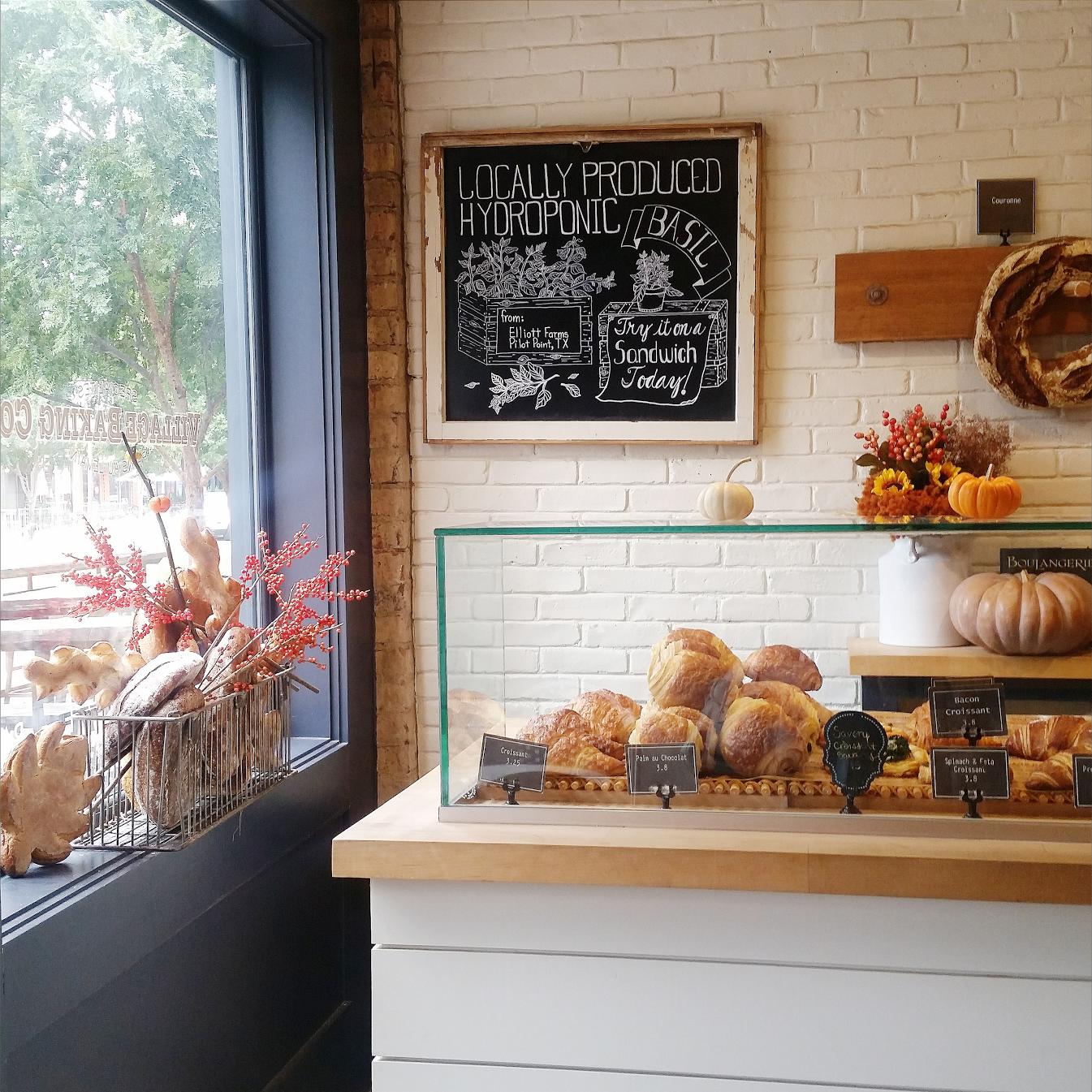 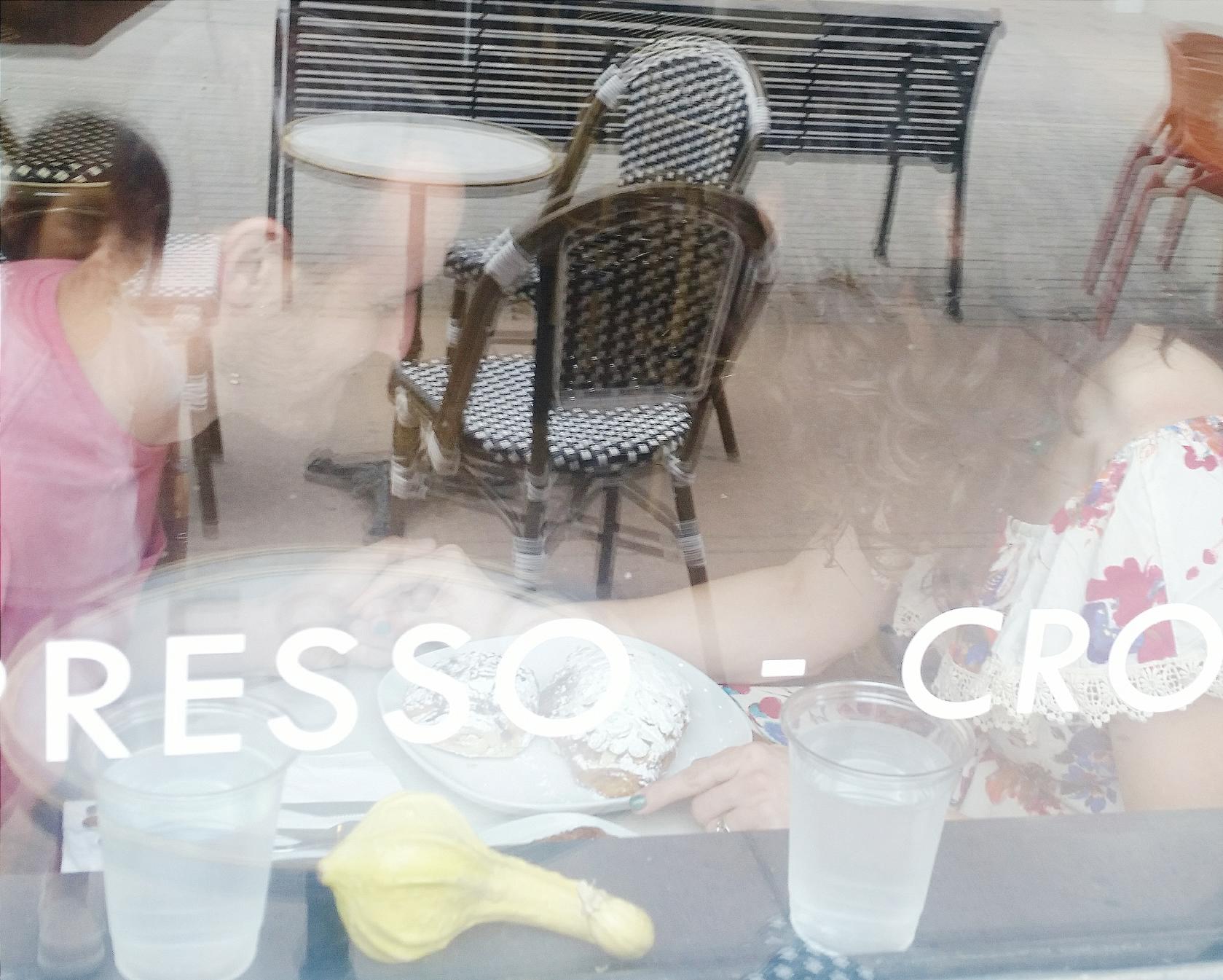 {It’s hard to tell what’s going on here because of the glare, but a lady saw us praying over our breakfast and thought it was a cool shot, so she snapped a pic. Kind of a fun shot to have}

The next few stops were a bit on the utilitarian side, since we stopped at a tile store and a faucet store, but after doing most of my house-researchonline, it was fun to be able to see and touch real! live! stuff!

And the NEXT stop was a complete happenstance but a  very happy one, indeed. As we were on our way to a cool-sounding antiques/salvage shop, we spotted this giant brick building with the words, “Uncommon Ground,”  on the side. 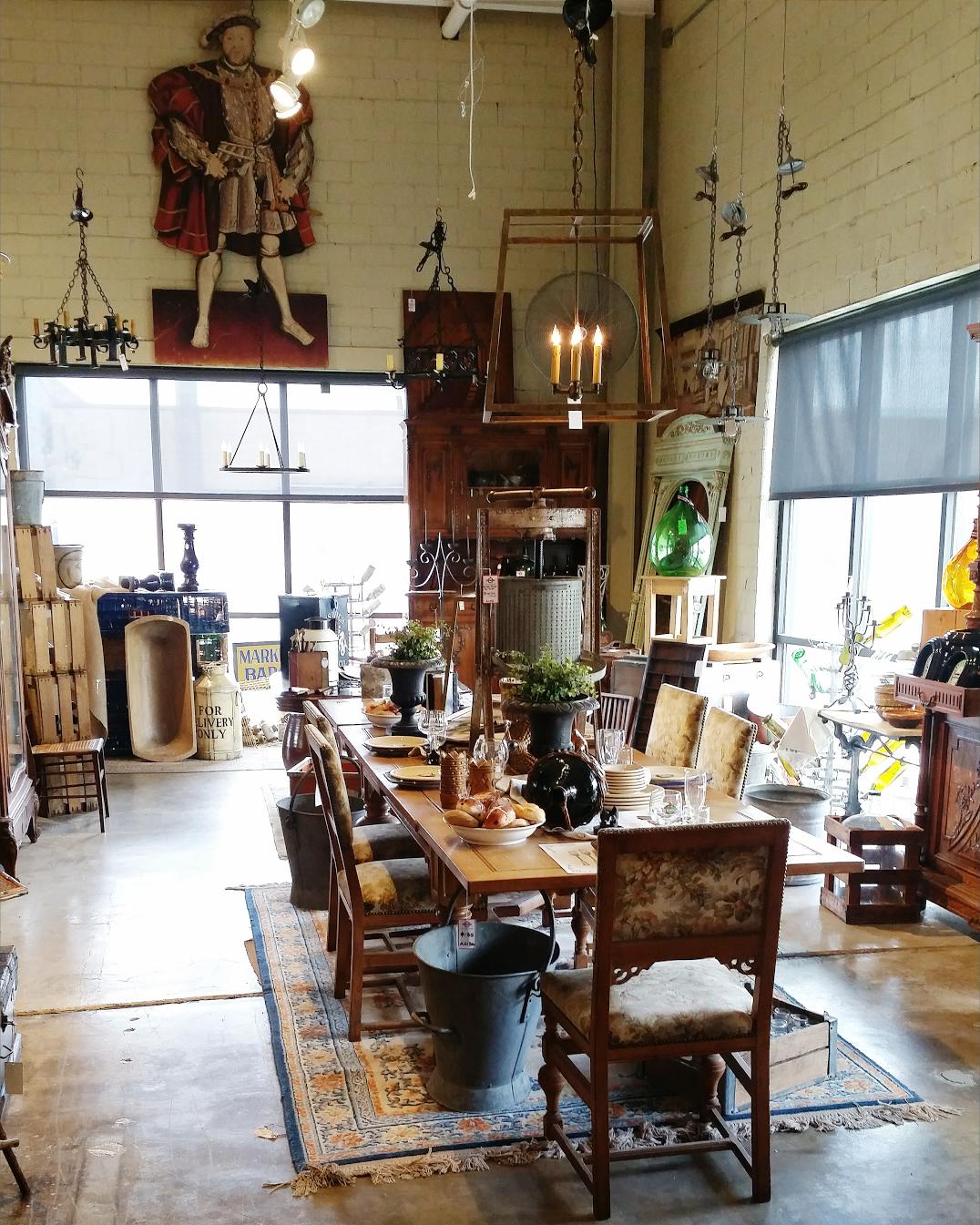 Turns out, it’s kind of the mother of all antique quirkiness and decor awesomeness. Again–you guessed it–we bought nothing (because the cheapest thing I saw there was an old spoon, and it was $8), but it was still such a fun little (um, big; it was BIG) find.

Am I just under a rock that I’ve never heard of this place? Because it was rad. 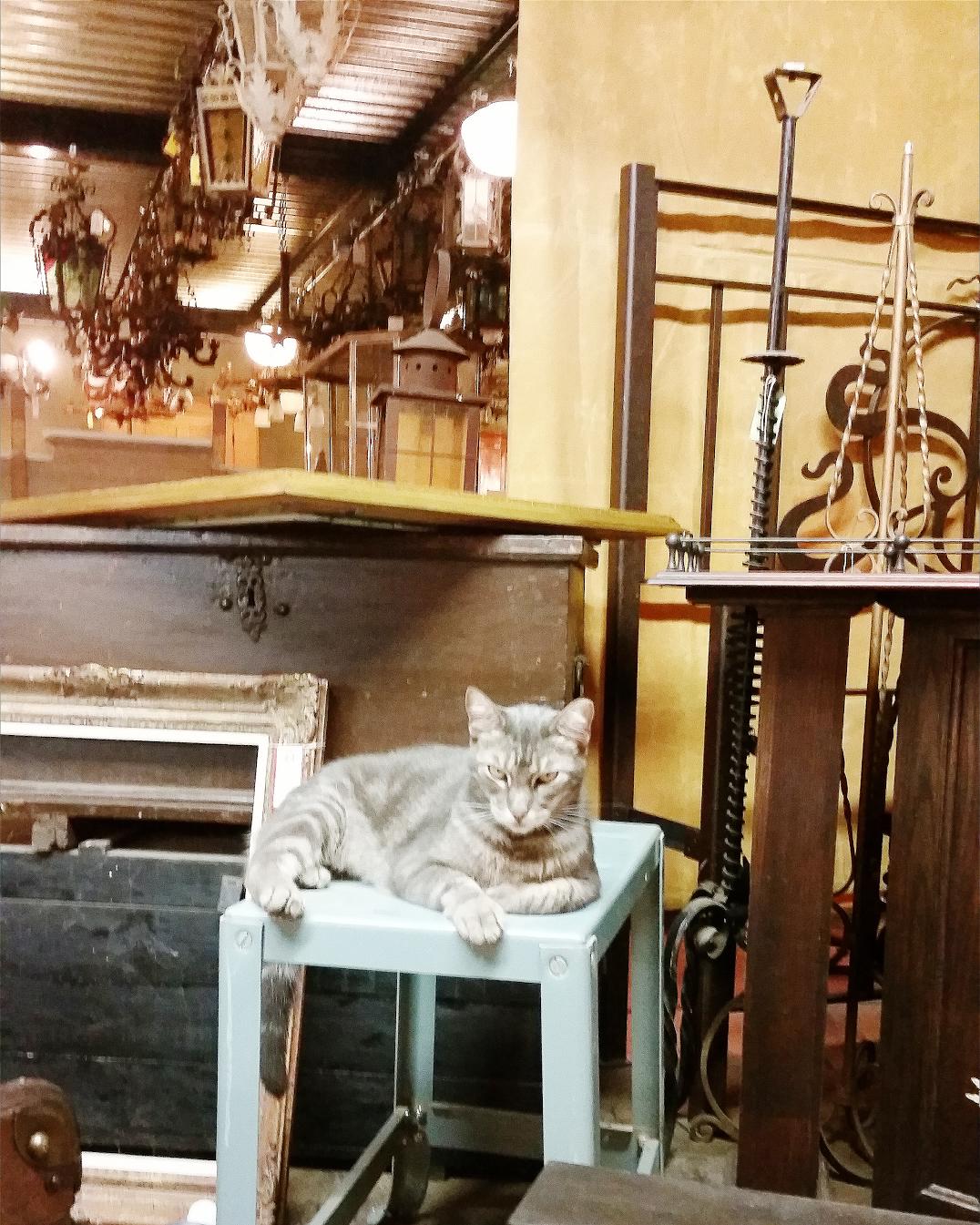 {Couldn’t leave without snapping a pic of just one of the G.I.A.N.T rather dour-looking cats who clearly ran the place}

Our last decor stop of the day was the salvage shop I mentioned, which was more reasonably priced, not quite as rad, but still worth the stop (hmmm….can’t remember the name at the moment…sorry!). Aaaand we bought nothing.

Lunch was an authentic New York Style pizza place called Mimi’s–where the nicest guy with the thickest New Yawker’s drawl told Shaun he was: “Real classy…taking the lady to a dive like Mimi’s on her birthday.”  But seriously. Good, good pizza, y’all.

Sensing a carb theme to this birthday? Apparently Baby #7 is keen for mama’s hips to GROW!

Our last stop of the day was our traditional jaunt to Anthropologie. 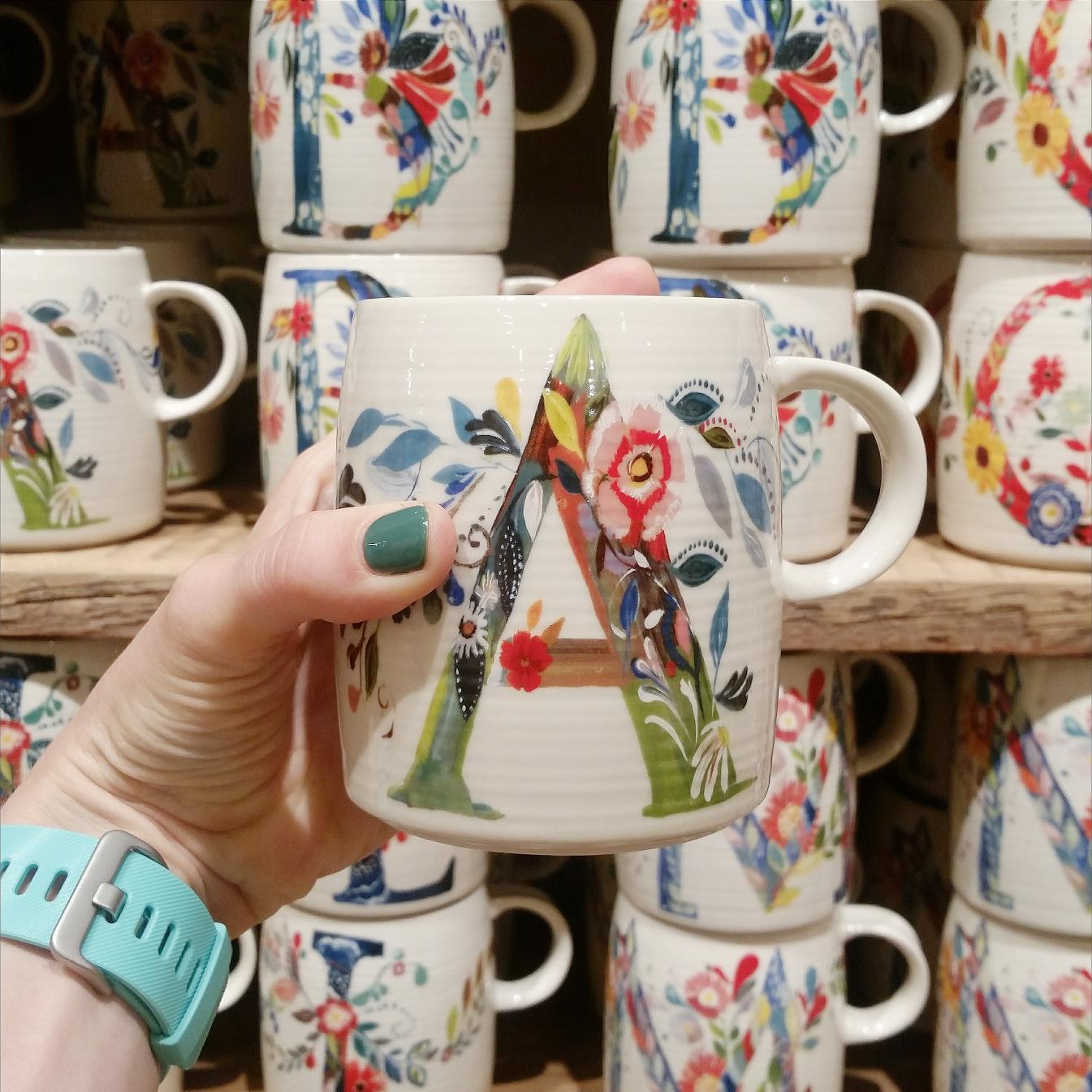 I am completely happy 99% of the time to just browse and get ideas, but this trip, I found a dress I loved on sale (and then an extra 40% off) that will work the rest of the pregnancy and poooosssibly beyond? So, that was a fun surprise. I tried to snap a pic of it, but my phone battery gave the fateful “extremely low battery” signal literally as I opened the camera on it, so you’ll just have to wait for that one. Nail-biter. I know.

The day ended with another super highbrow carb fest of chips, queso, and Torchy’s Tacos (because NOTHING says classy like ordering a taco called “The trailer park” and being asked if you want to “make it trasy”–i.e. add queso) and a very sweet reunion with my babies.

Honestly, it’s one of the best birthdays I can remember in recent years (and they’ve all been good!).

There’s nothing quite like a super-relaxing time away with your love–with a bit of deal-haggling and house productivity thrown in for good measure!

Consider yourself caught up for the moment. I had a good birthday. And then I got sick.

The end. (Anybody else wondering why I didn’t just write that?)

Y’all have an awesome Thursday!