First things first: no baby yet.

Hmph. (Although, really, I’m not the least bit surprised).

Now that that’s out of the way…

I have now been a mother for 10 and 1/2 years–give or take–which, I realize, is a mere drop in the bucket for those of you with grown children. I value the advice of more seasoned mamas so much. It gives me hope. Direction. Motivation. Well, assuming it’s helpful and godly, I guess. (I’ve definitely gotten the, “Just wait ’til they’re teenagers. Get ready for hell on earth,” response before, which wasn’t terribly hopeful or motivating. Just to be clear, I’ve also been assured of just how delightful the teen years can be if you invest heavily in the early ones, and that DOES give me hope!).

So, I thought I’d share something I ran across when I was cleaning out my closet last week in a fit of nesting zeal. It was an old prayer diary/journal in which I pretty frankly outlined how much I didn’t enjoy being a mama to two little bitty kids.

Don’t get me wrong: I wasn’t proud of it. I knew my attitude should be softer, kinder, and gentler. But it was the year we finished building our current house, and the particular entry I was reading was a few months after we’d managed to move in but were still miles away from being “finished” (there are enough things that we could still tweak now–8 years later–that I’ve long since given up the concept of ever truly finishing a house to the point that it stays that way).

We built our house quickly (the actual construction only took 9 months with 95% of the work being done by Shaun or Shaun/his dad), but it meant that we saw very little of each other and spent pretty much every spare second doing something house-related or “real”-life-related (you know: the day job to pay the bills, the wiping of the bottoms, the grocery-shopping, etc.). We were tired. I was up by 5 most mornings because we lived with/rented from my parents while we built, and Shaun and I were sleeping in a 3rd story dormer while the boys were on the second floor. Simon–who was a baby at the time–was up dark and early like clockwork, and I did my best to scurry down as fast as possible to keep him from waking my parents or brother up. Sometimes, Shaun didn’t get home from working on the house until 9 PM, at which point he started programming or answering emails, usually falling into bed between 11 and 12 to start it all over again the next day.

It was definitely worth it for a short season, but I think that, even after we moved in, we still had a fair bit of catching up on rest and sanity to do. But Ezra was smack in the middle of the tantrum-filled 3’s, and Simon–well, Simon was delightful, but he was 20 months and into everything (especially the construction zone rooms full of supplies and unfinished floors). Plus–and I just realized this as I think about the timing–I was pregnant (and about to miscarry…not that I knew that).

I wrote in that journal about how I couldn’t wait for naptime. About how short-tempered and irritable I felt. About how little I liked Ezra’s personality at the moment (apparently, he was a bit on the needy, demanding, fussy, whiny, fit-throwing side…sound like any 3-year-olds you’ve ever met?).

And again, as I remember the first (and only) trimester of that pregnancy, I recall how hormonally “off” I felt. Have you ever experienced that skin-crawling, don’t-touch-me, leave-me-alone-for-the-love sensation? If you’re a mama (or an adult female), surely the answer is yes at least once.

Well, I remember feeling like that all of the time.

I might not have been the hugest fan of my toddler at the time, but I liked myself even less.

By the way, if you’re thinking: “Gee, Abbie. I’m not feeling too uplifted here,” I’m sorry.

I try to be as positive and honest as I can here without treading all over our family’s privacy. But this was not my finest (or happiest) moment of motherhood by any stretch.

And I think it may be easy, as you read about the good things that have happened to our family and see our smiling faces in Sunday photos on Instagram, to assume that I’ve never struggled with motherhood. It wouldn’t be true. And it wouldn’t be what I’ve admitted here many times over. But it’s still possible to infer from what’s missing (a daily rant about the 5 glasses in a row of spilled milk and how I lost it on the 3rd) that it never happens.

It does. Because my kids and I are both very human and sinful.

And the honest-to-goodness truth of November 2009 is that I did not enjoy motherhood very much. I even wrote about Shaun’s feeling a lot of the same things, which doesn’t surprise me, since the boys really were in a challenging stage (and very close together at only 18 months difference in age), his wife was grouchy and hormonal all of the time, and he still had mountains of house-building and lay work to do every single day.

Fast forward 7 years, and the honest-to-goodness truth is that I genuinely like all of my kids (as well as love them, of course; that never changes), and I enjoy being a mama.

Well, most of the time. Because there are definitely moments–like when a certain 4+-year-old had a major accident on the kitchen floor yesterday and did nothing to stop herself–that I not only do not enjoy my de facto position as cleaner-of-all-the-grossest-things, but my attitude about it is downright ugly.

I’m still a work in progress, and the Lord is still graciously peeling back layers of selfishness and expectations (that my kids “should” behave a certain way…that I “shouldn’t” have to deal with a particular setback anymore…that my husband “should” notice and appreciate what I do more) on a daily basis.

But I can see the progress. In my children, sure, but mostly in me.

Because what has changed the most between 7 years ago and now is not so much my circumstances as my mindset toward motherhood.

Yes, when the boys were both little, I was exhausted. Yes, while I was pregnant (with the one that I miscarried), I was especially short-tempered (less so with other pregnancies). Yes, my attitude improved when my circumstances changed.

But it was in the grappling with my own self-centeredness, in the crying out to God to create in me a clean heart, in the head-down, teeth-gritted, muttered-prayers enduring of fits and blowouts and late nights that my heart truly began to soften towards these little people he had entrusted to me–that I began to expect this kind of “nonsense” and then feel genuine thankfulness when it didn’t last forever.

It was when I began to have an inkling of what it means to rejoice in the Lord always, instead of simply resenting an inevitable “inconvenience,” that my outlook truly improved. (Still a lot of improvement to be had here). And that rejoicing only increased as my children grew, matured, and showed the fruits of the labor I’d put in. 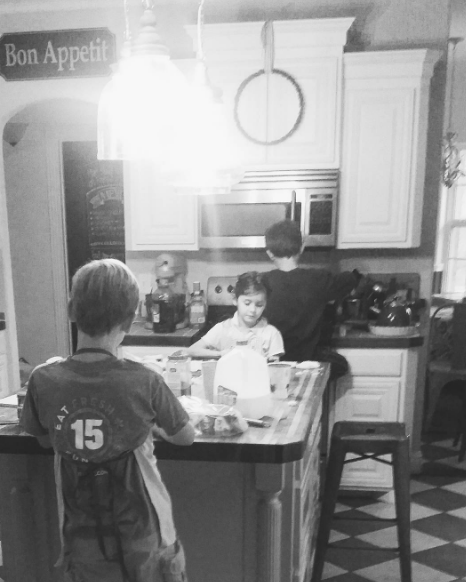 {If you’d told me when I only had two under two that one day those two plus their sister would cheerfully make 2 dozen freezer muffins for Baby Number 7, all on their lonesome, I don’t think would have believed it; praise God for perspective from “the other side”}

Since those baby years with my first two, there have other mothering “rough patches.” My miscarriage. Della’s six week nursing strike. Della’s yearlong bedtime strike. The entire process of training the boys to do chores when they were little. The twins’ pregnancy when I already had 3, ages 6 and under. The twins’ four-day-long labor. The twin’s first 12 weeks of life. The twin’s toddlerhood from age 2 1/2-4. (Ah, twins; what instruments of sanctification are thou).

But those periods are not what immediately pop to mind as I consider my decade of mothering. Instead, I remember the  joy of finding out that our 3rd child (who was our rainbow baby after my miscarriage) would be a daughter whom I would name Adelaide–a name I’d cherished since the first time I watched Anne of Avonlea at age 8. The fun of teaching Ezra to read (he’s a quick learner!). The fun of watching my oldest two–then 5 and 3–build their first snowman. That time the boys–who had wept and gnashed their teeth at the process of learning to fold clothes–looked up at me from a quickly dispatched pile and said, “Wow, Mama. That was easy. I like folding clothes!” The nerdy thrill I get when Ezra makes funny quips about being a “whittler on the roof,” as he diligently slices away at a stick while sitting on the (flat portion of the) roof of our new house. The twins’ excitement over meeting the new baby and the giant strides they have made in emotional maturity in the last few months. The sheer glee every person in this family feels when Theo first gets out of bed in the morning and does his signature bouncy run to his high chair, crowing, “Hung-eeeeey!” and grinning the whole way. 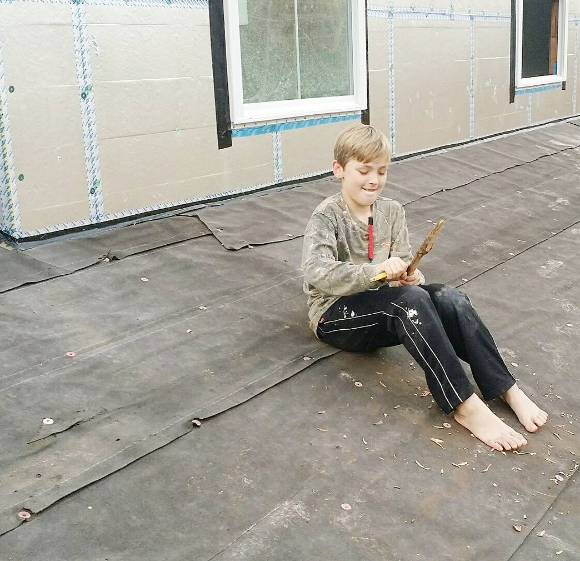 So, what’s my point?

That, if you don’t love the phase you’re in, I get that. I’ve been there. I return there on a semi-regular basis. It’s the cyclical nature of motherhood (nay, life).

But our current circumstances don’t have to define us or determine our character. And hard is most definitely not the same thing as bad.

In fact, it may be the very thing that drives us closer to the heart of God, makes us more empathetic and aware of others’ suffering, and forges a deeper awareness of just how much the Maker of the Universe loves us to give us the exact struggle that we’re experiencing.

If you’re grappling with something hard right now (motherhood-related or not), hang in there, friend. God sees you. He hears your desperate, semi-coherent prayers at 3 AM for just one straight hour of uninterrupted sleep. He loves you more than you could ever fathom.

“We also rejoice in our sufferings,because we know that suffering produces perseverance; perseverance, character; and character, hope.” Romans 5:3-5

“For I am confident of this, that He who began a good work in you will continue to perfect it until the day of Christ Jesus.” Phil. 1:6

“Let us hold fast the confession of our hope without wavering, for He who promised is faithful.” Hebrews 10:23

Because: “He will sustain you to the end, so that you will be blameless on the day of our Lord Jesus Christ. God, who has called you into fellowship with His Son Jesus Christ our Lord, is faithful.” 1 Corinthians 1:8-9.

Therefore: “Let us not grow weary of doing good, for in due season we will reap, if we do not give up.” Galatians 6:9

I could go on naming the promises of God, but I think you get the idea. He is good. He is faithful. He is patient. He is kind.

Even (especially) when we are not.

If there’s some way that I can pray for you, please don’t hesitate to email me at blogabbie{at}gmail{dot}com.

It would be my privilege.