I was going to call this post “An Island Dilemma,” but the English major part of me knows full well that a dilemma is a decision between two bad choices, and I honestly think that all of the choices I’m about to present for your consideration are (potentially) good ones. Hence the “quandary.” (Which, to be strictly accurate, still refers to a “difficult situation,” which…this isn’t. But enough with the semantics).

So, in case you need a refresher (or never saw it), here is the inspiration board I put together for the kitchen in the new house (for someone who names everything, I really should have a name for “the new house” by now…feel free to throw some suggestions my way). 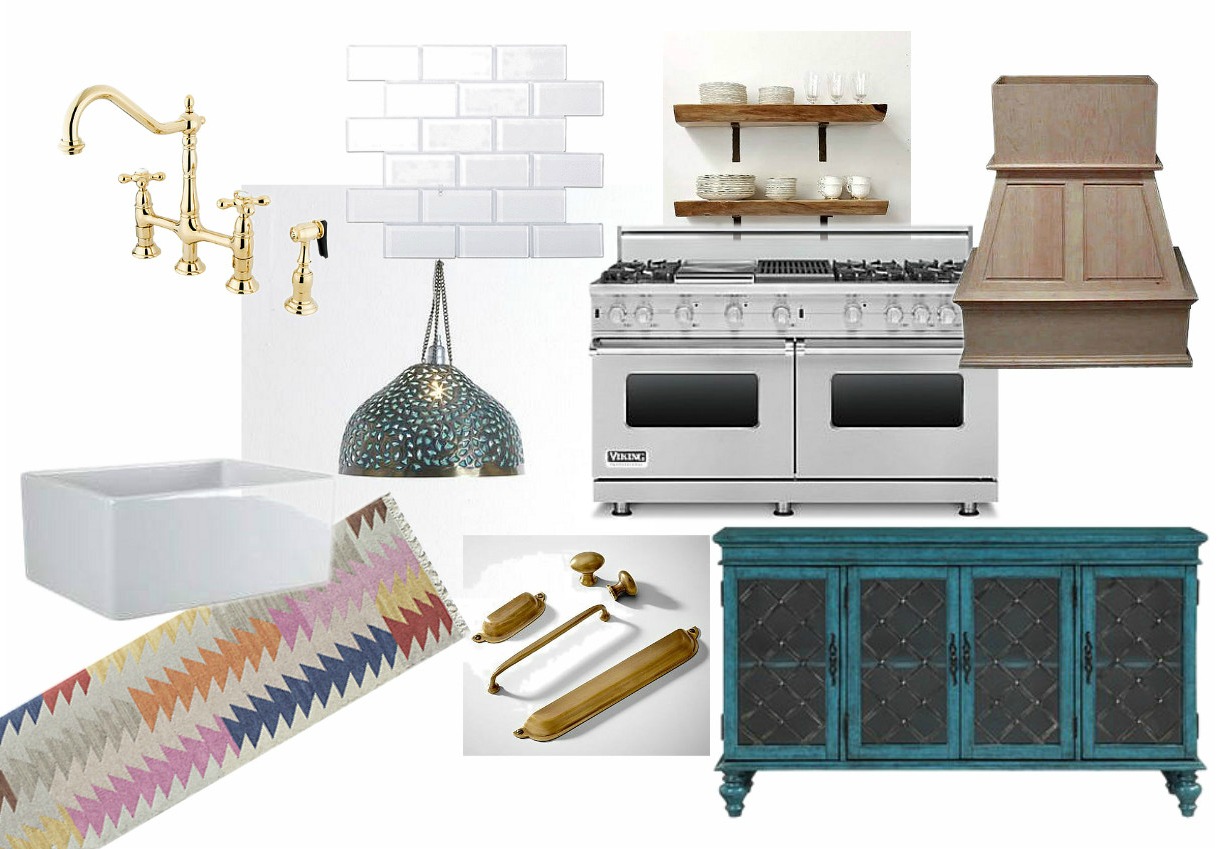 It’s kind of fun to look at this and see which elements have stayed the same and which have evolved. The sink is different (although still a farmhouse silhouette). The lights are different (went with these during a Black Friday sale, and they finally came last week and are lovely). The faucet is the same style but wall-mounted and in chrome. And for the hardware, I’m pretty sure I’m going with these: 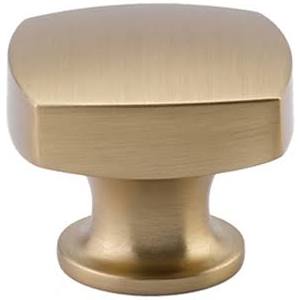 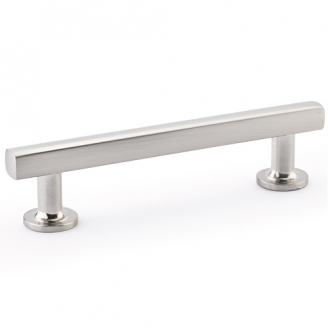 (Except they would both be the satin brass color of the knob from above).

They’re a super-reasonable price for real brass (holds up better; doesn’t discolor as easily as the zinc alloy versions), and they actually carry them locally, which is awesome because I’ve discovered that I’m pretty picky about the shades of brass that I do and don’t like (anything too green or yellow is a no-go), and these are a gorgeous soft gold in person.

Oh, and I must have had that rug embedded in my subconscious because I had completely forgotten that I’d included it on the board, and I still ended up buying this nuLOOM arrowhead design

in a runner (on suuuuper sale) during Black Friday. 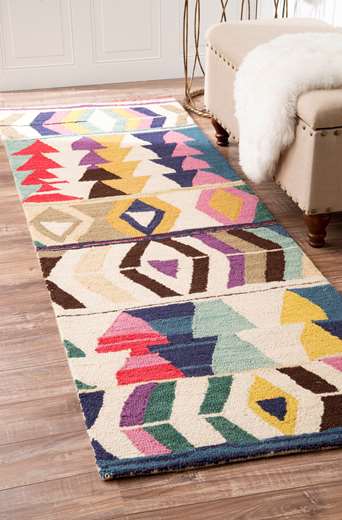 Shaun saw this and looked confused, since I’m usually a floral girl. Not sure why I’m digging the tribal arrows so much, but…I am. So there.

The subway tile is still in the plan, as are the open shelves and wood range hood. The range actually ended up being rangeS, since I found an awesome deal on not one but TWO 30″ pro-style GE ranges with dual fuel (we wanted a gas stove and an electric oven).

Oh, and the color I’m leaning towards for the lowers is actually called Weekend from the Magnolia Home paint line. But I’ll probably just have it color matched because their paints are pretty pricey. 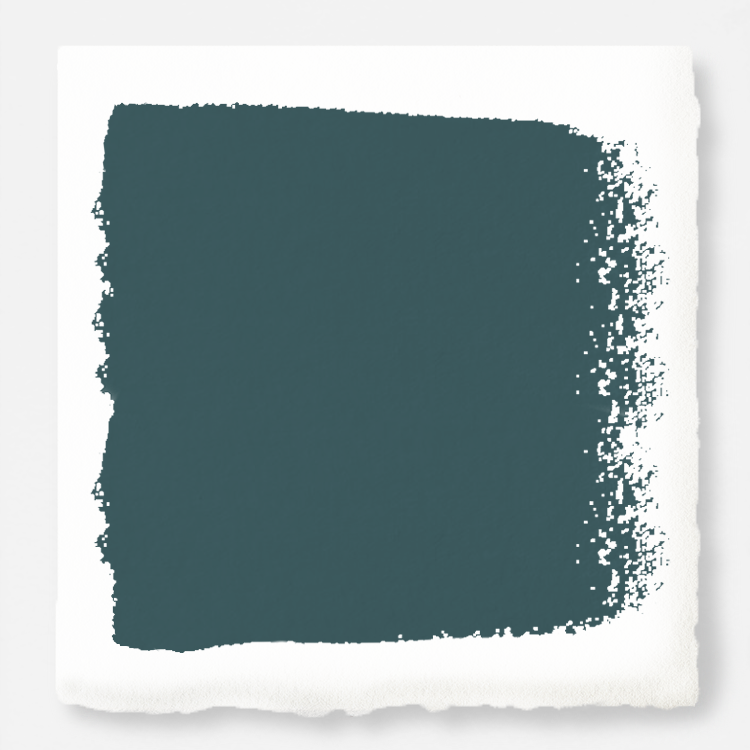 Oh! And not mentioned or shown above…but we’re 99% sure we’re going with laminate countertops in Wilonsart White Carrara with a velvet finish.

Now that you’re all up to date on the minutiae of my kitchen choices, let’s get back to the quandary (dilemma…decision I have to make…whatever).

And that would be: what color to paint/stain/make the island.

Which, by the way, has turned out even prettier than I’d hoped.

It’s just under 12 feet long, so it’s a bit of a beast. But, as excited as I am to put her to work, what makes me a little swoony are all of the fun decorative details like those corbels, the curvy legs, and the carved panels on the ends–all of which I chose/designed not feeling entirely sure that they would turn out well together. Happily, they did! At least, I like them. So, that’s good. (And the base trim isn’t even on yet!)

Here’s a shot back towards the sink/windows. 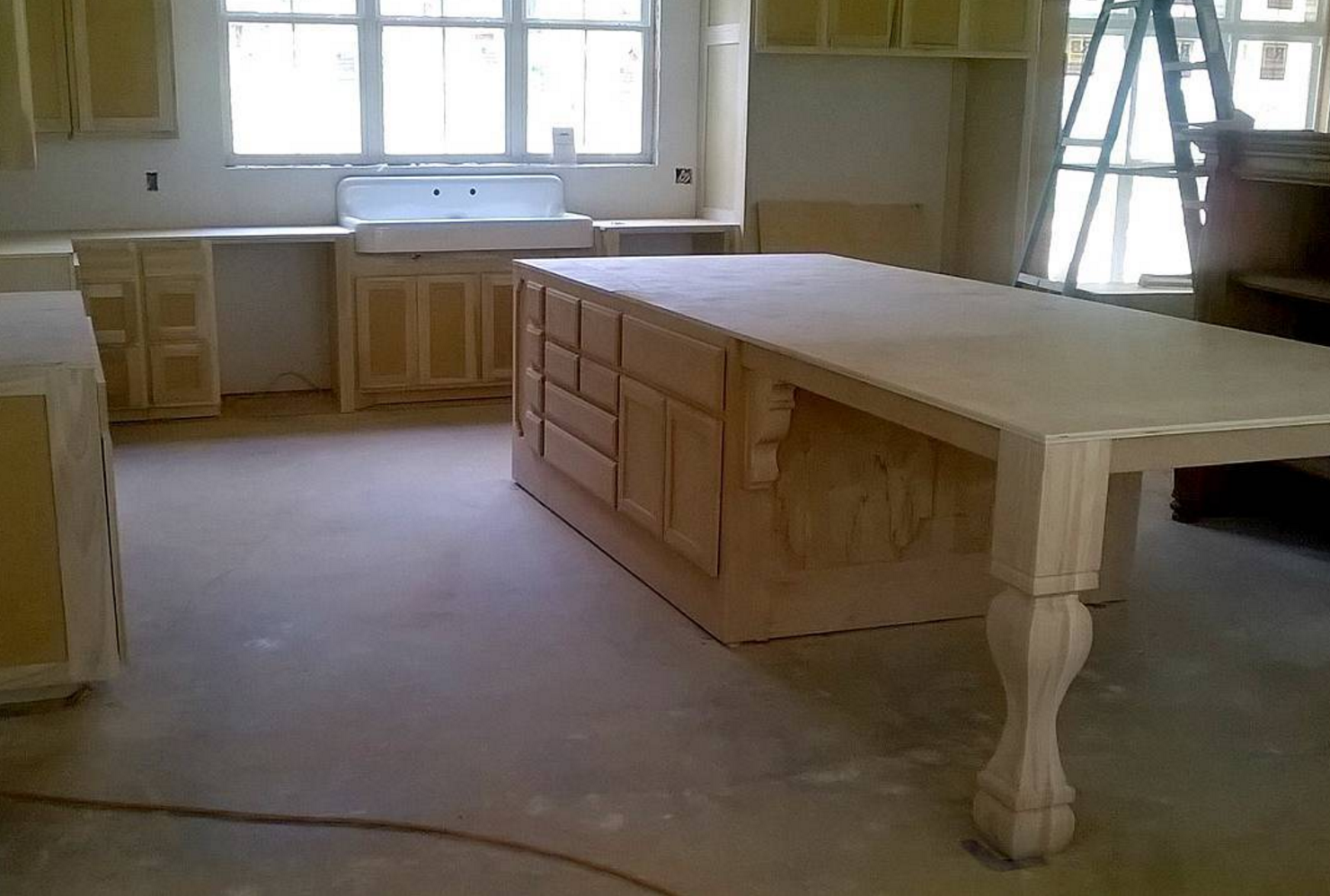 And another from the other side. 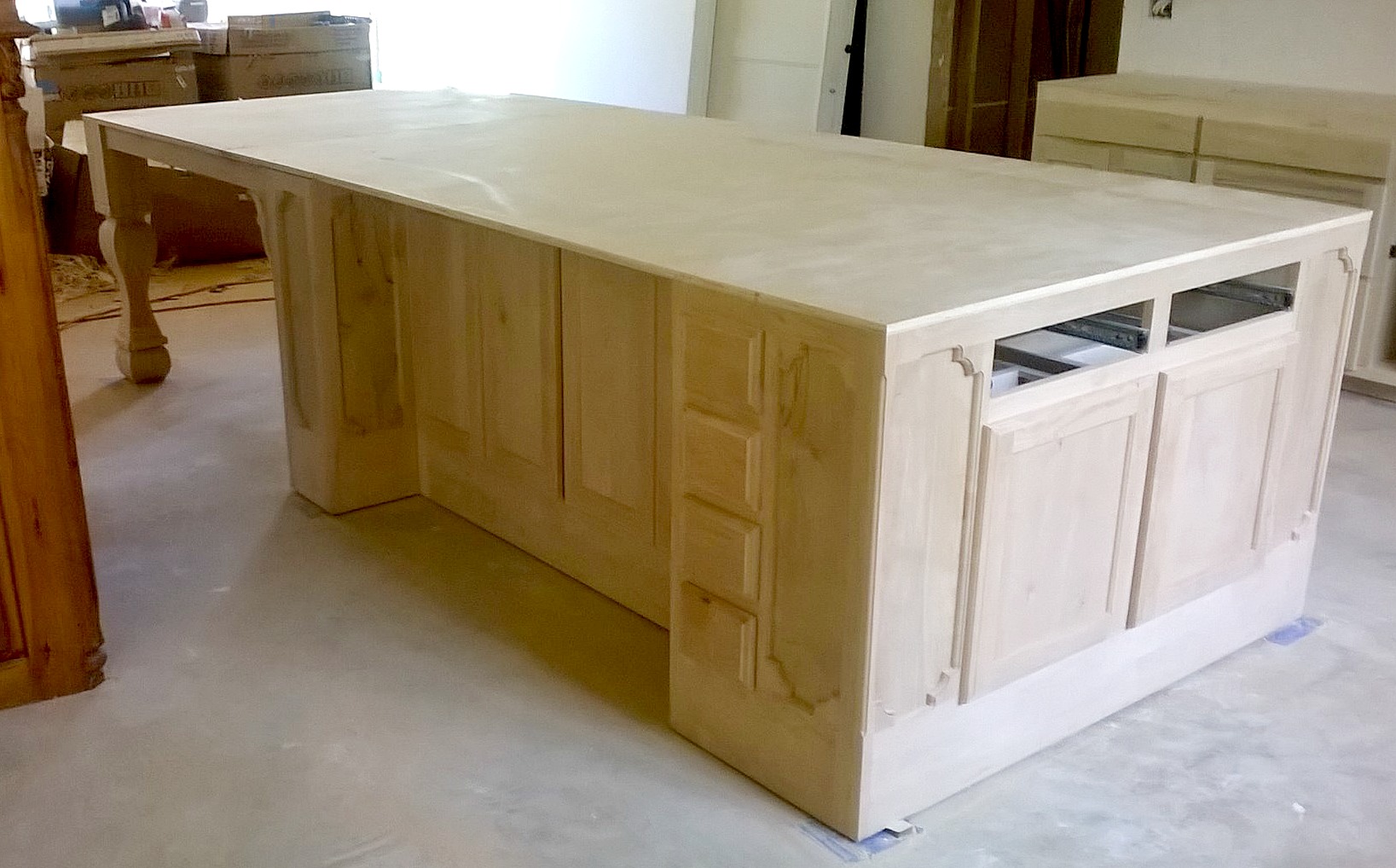 (Those drawers are removed because they forgot to include a spot for an outlet, so that’s getting fixed).

So, now that you’ve seen pretty much every angle of my kitchen island, what do you think?

Should I stain her? (That’s been the plan all along). If so, what color? (My stools and floors are both a medium oak tone, and I don’t want anything tooooo matchy-matchy).

Another good option would be white-washing, which would allow some of the wood grain to show through without committing to an actual color.

I’m disinclined to paint her, although, if I did, it would be white, since we will have white uppers, and there’s enough going on with the teal lower cabinets that I don’t need a competing color on the island.

Whatever I do to the island I’m probably going to replicate on the range hood to keep the tones in the kitchen consistent. So, this decision is a bit of a double-whammy.

Oh! And if it will help you to make an informed decision, if you scroll up and look at the side view of the island, you’ll see the stained hutch in the background, which will be against the wall between the dining room and the kitchen. The color it’s stained is a little more orange than I’m willing to go with the island, but I like the medium range it represents.

Any thoughts? Suggestions? Specific stain names I should test out?

You know I love a good reader poll, so hit me with it!