If there are two things that I am extremely consistent about when it comes to home décor, they are these:

So, when you combine the two, I am a very happy woman indeed. 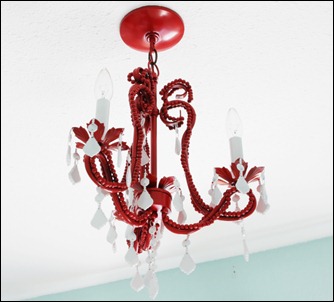 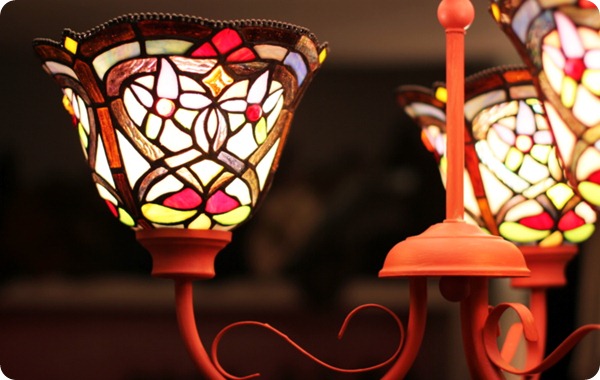 The painted garage sale chandy with jewel-toned shades in my master closet. 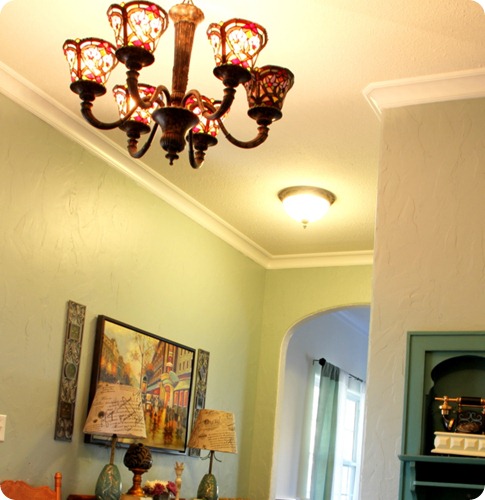 Same shades on a different chandelier in our entryway. 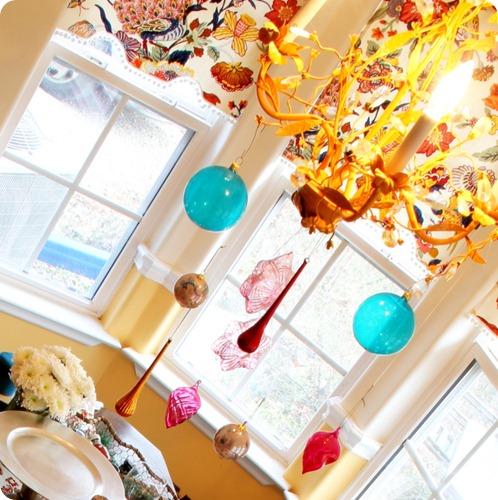 Yet another spray-painted chandy in our breakfast nook.

And that’s not even counting the other two neutral-toned ones that I have in the stairwell and the craft room.

Now, you may be thinking, “But chandeliers are expensive and impractical.”

And both can be true.

But all of mine live in places where the lights don’t stay on for extended periods of time (and we’re pretty good about keeping them off unless the boys go on one of their epic, “Let’s flip every switch in the house” sprees), AND (the most awesome part of all), with the exception of the entryway version, I paid an average of $30 for each one.

Mostly by buying from the deeeeeeep discount clearance aisle at Lowe’s or by being willing to see the potential in a thrift-store chandy that wasn’t exactly what I wanted but could be made so with a little spray paint and elbow grease.

In fact, I combined those two factors when I bought a small chandelier for the twins’ room from Lowe’s last week for $25 (originally $100) and got my spray paint on. 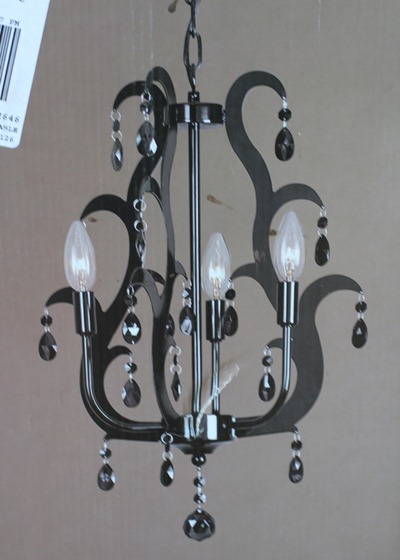 I wish I could have taken a picture of the saleslady’s face as I reached for the box to place it on the counter.  She practically lunged at me and said, “Noooooo! Don’t lift that! I’ll get it.”

But I was already halfway through picking it up…with one hand.

Seriously, despite what the substantial box implied to the contrary, this little guy weighed 5 pounds max.  The thought of anyone’s having paid $100 for his lightweight self is a bit ludicrous.

I assembled my usual arsenal of transformative tools: 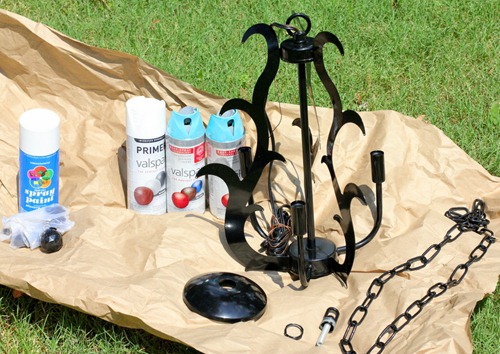 {if it looks bright out there…it was. And hot. That too}

…and got to work. 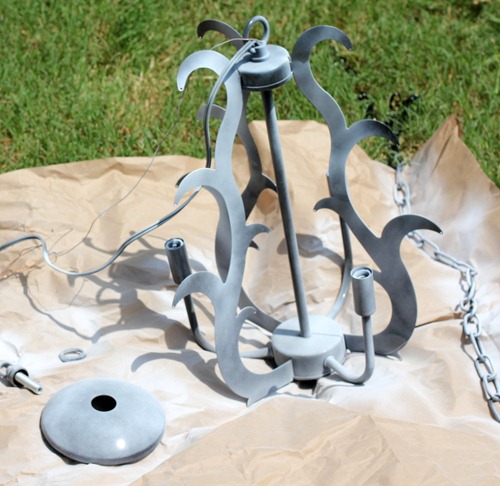 Just the barest coat of primer to take the sheen off the metal and make the color stick. 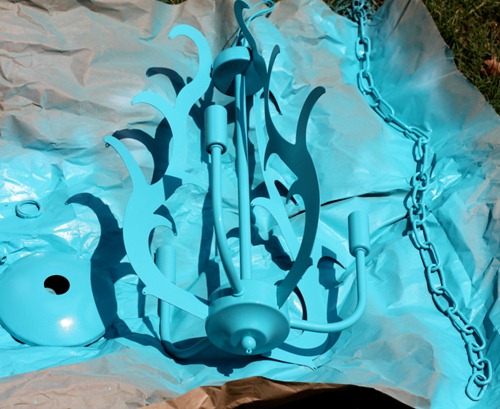 Lots of light coats make the job go more quickly. Granted, this is a very small chandy, but I still managed to apply at least 3 light layers in about 20 minutes. 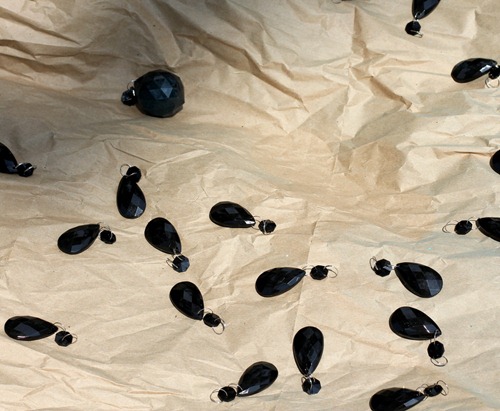 The “hardest” part = not hard at all, really. Just a little tedious to make sure you’ve managed to coat every surface of the crystals. 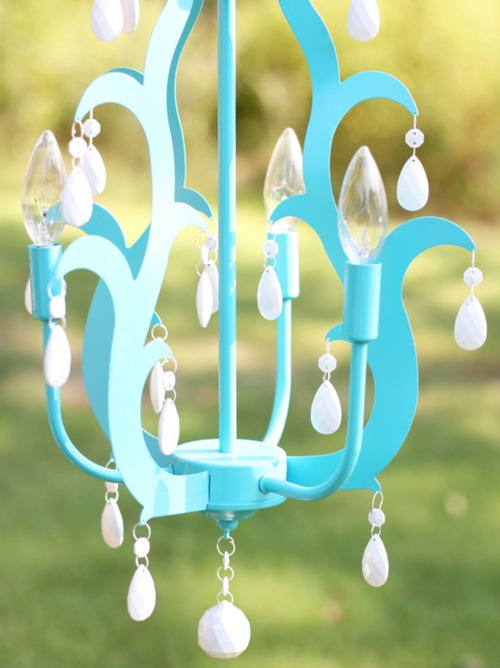 As I mentioned, this is going in the twins’ room, whose color scheme is largely determined by an accent wall covered in this Amy Butler wallpaper (which, if all goes as planned, will be hung today): 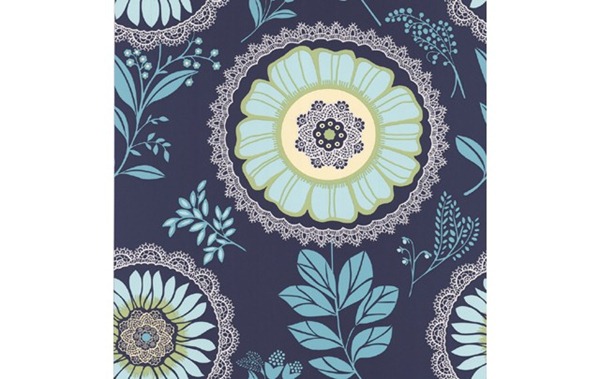 Besides the chandelier, the wallpaper, and a bench with colorful seat cushions, the rest of the room will remain calm and neutral, so I’m really looking forward to seeing how the pops of color I’ve chosen contrast with the walls, which are this uber-soothing shade of greige (love, love, love it!):

Speaking of colored chandeliers, I have a question (and a sneak peak!) for you.

We’ve been plugging away on the garage addition since Shaun got back from his last trip, and we’re making some exciting progress!

I’ve already shown you an inspiration board for the basic color scheme and look that I’m going for: 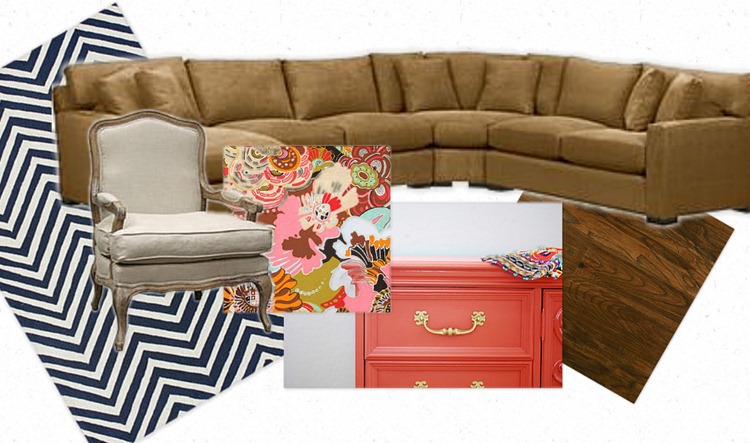 Well, we’ve got the paint on the walls, and I scored this sectional (plus a matching ottoman) on craigslist the other day for a great price:

{Which is what I keep telling myself every time I think about how much left there is to do).

Here’s what we’ve got so far: 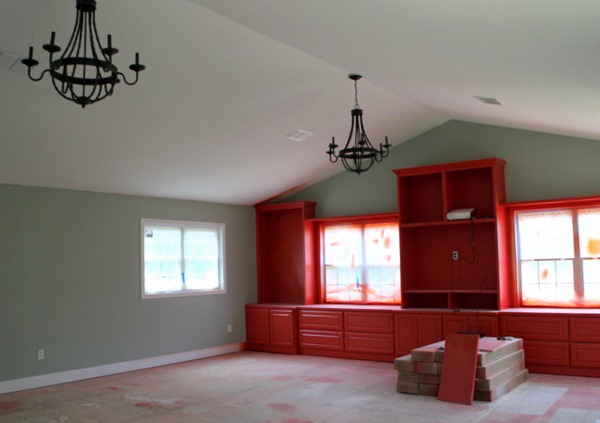 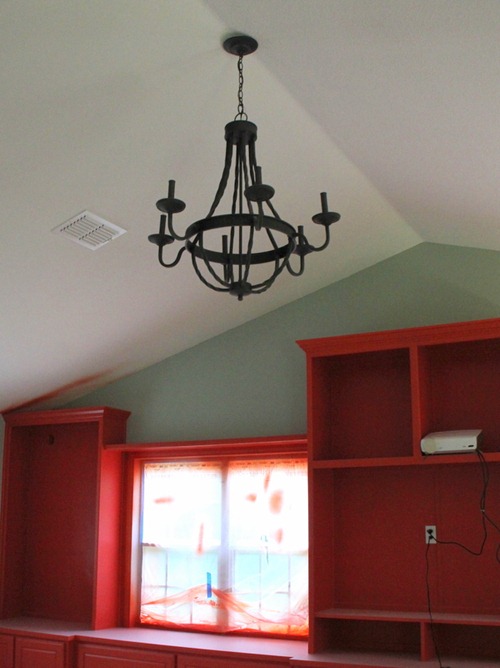 So…here’s where you come in.

And they were a decent price.

And they provide lots of light, which is important in such a large room.

I don’t love the color.

I know it’s a little hard to tell from these shots, but they’re a matte oil-rubbed bronze, and it gives them too formal of a look for what I would like in this room, which will eventually wear many hats as a toy room/game room/school room.

Since I clearly am not the least bit afraid of painting chandeliers, I would love some feedback on what color you think I should go with:

I could go a shade or two lighter than the walls with something like Rustoleum’s Sea Foam Green.

…or go for a bit of drama with a hammered copper treatment.

…or try to match the indigo in the rug with a deep, glossy shade like this one.

I usually have a vision in my head for where I want to go with color, but right now, I mostly just know what I don’t want.

Feel free to throw out general colors or send me links to specific options.

Oh, and since the main point of this post was that I painted a chandelier for the twins’ room, here are few more shots of Amelia, the aqua chandy (I really need to stop using names I like on inanimate objects since all I’ll be able to think when atempting to name any possible future children or pets is: “I had a blender/light fixture/glue gun named that once”). 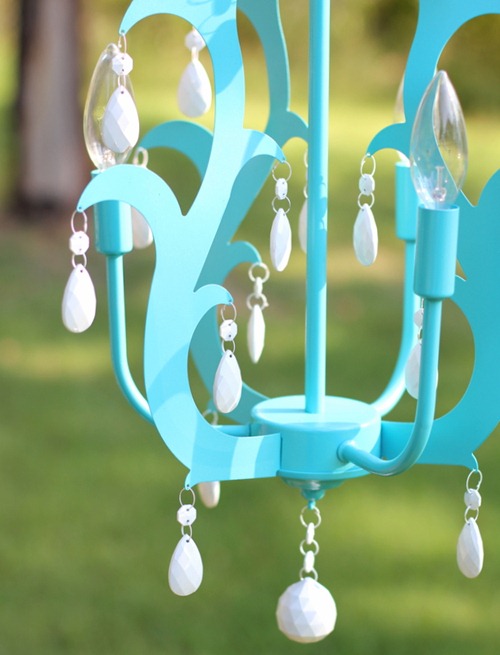 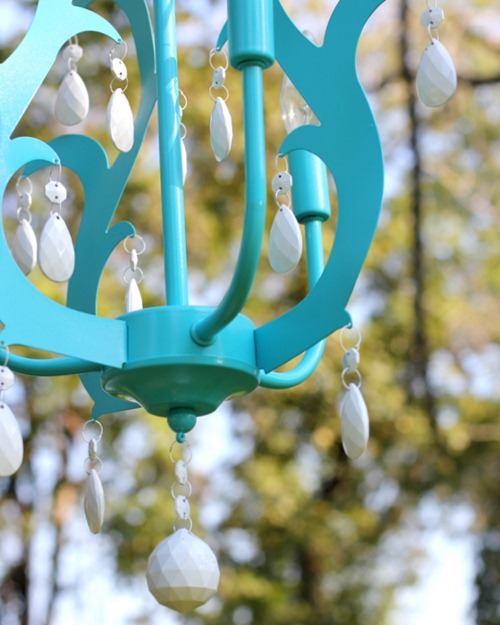 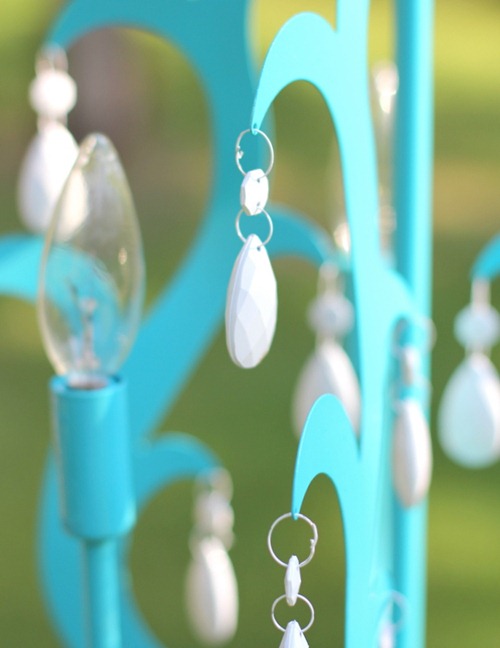 I hope that bright, happy aqua makes the twins smile as much as it does me!