So…I’m not intentionally yanking your chain by posting so late on a day when I know many of you are assuming that no post by 8 AM means babies are here or on their way.

But I had a post all planned for today and then Mandy staged an intervention at the best possible moment and invited me out for a girl’s night last night, and, besides church (when I wore that striped maxi—still stained—which has become my wardrobe go-to for the last week and 1/2 or so), it’s the first time I’ve bothered to dress halfway decently in a while, so I decided to show you ONE MORE SHOT of what I’m wearing while (ridiculously, crazily, over-the-toply) pregnant. 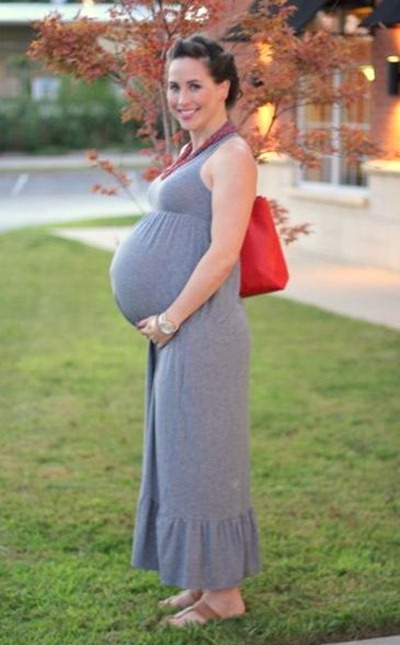 I do not often see myself from this angle, but that is one. big. belly. 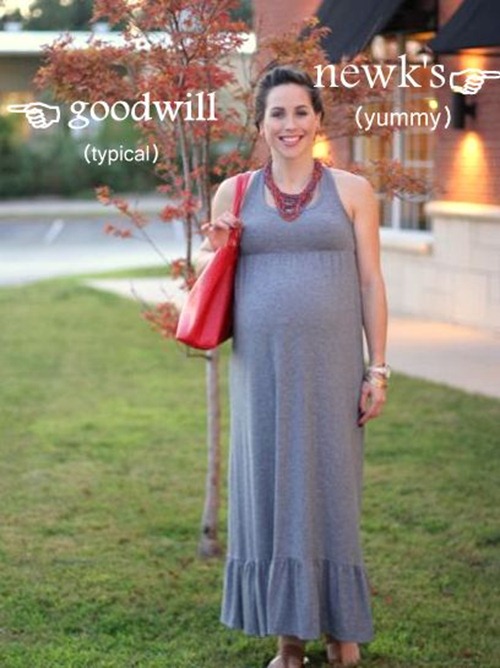 {I thought it quite appropriate that beloved Goodwill was looming behind me as I was wearing my thrifted maxi, but the truth is that that particular Goodwill has gotten a little too impressed with itself and charges way too much for a less-than-stellar selection, so I prefer to stick to my little-known, small-town option}

Obviously, I did not stray far my maxi dress uniform. Anything else besides p.j.s or exercise clothes is pretty much torture these days—constant tugging or squishing or other such unpleasantness.

I’m going to make all you mamas out there hate me a little when I say that I’ve never gotten to this point before. Sure, with two previous pregnancies that lasted 42 weeks, I’ve been plenty ready to get the baby out.

But I think this twin pregnancy has done a lot for my empathy for other pregnant women. I could relate on a lot of levels in the past, but I’ve been pretty spoiled on the comfort (even at the end) level so far (and I think I still am pretty much considering the fact that I don’t want to curl up in a ball and die—yet—and there are two babies in there).

But now I really get it.

And “it” isn’t particularly fun.

In fact, it was particularly UN-fun yesterday afternoon.

I was just done.

Nothing was wrong, other than the fact that I wasn’t in excruciating pain.

Sounds crazy, but that really was the problem. Everything was just a little too normal.. Yes, there are some indications that my body is trying to warm up for labor, but apparently, as Mandy pointed out, my competitive nature has put me on some sort of subconscious mission to beat all the rest of the mamas of multiples in the world and become the first ever to go to 41 weeks with twins (I’m not quite 39 weeks, and even if I do end up being overdue, I know I won’t be the first…so that was just me being dramatic; I’m allowed, right?).

I didn’t even particularly want to go last night (sorry, Mandy, it wasn’t personal, I assure you). 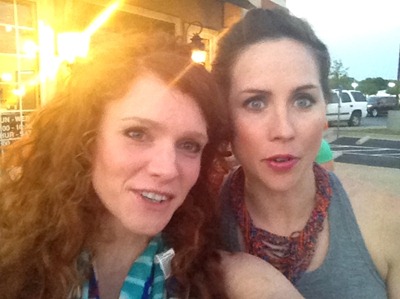 Here we are attempting to be all bloggerish and cutesy with the cell-phone pic, which got snapped just as we saw the sneaky green sleeve in the background! By far my favorite shot of the evening (minus the dark circles under my eyes, of course). 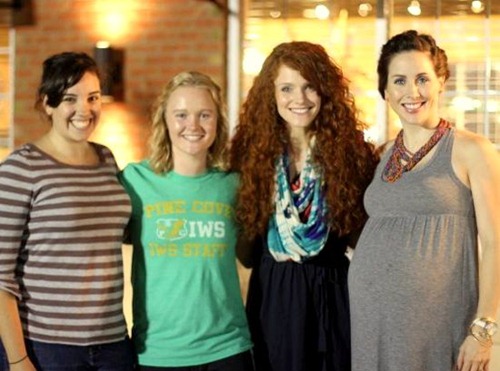 And here’s the blog-worthy posed shot with Green Sleeves (aka Jenny) and Lacey.

Then, Mandy and I headed to Target for a little clearance rack browsing (though, I’m not going to lie—shopping with a mountain on the front of you is a great way to save money).

Mostly, we had fun trashing the current trends (neither one of us is convinced that either peplum or maroon is any girl’s best friend—especially when you combine the two), but both of us were drawn to this cute little polka dot cardigan… 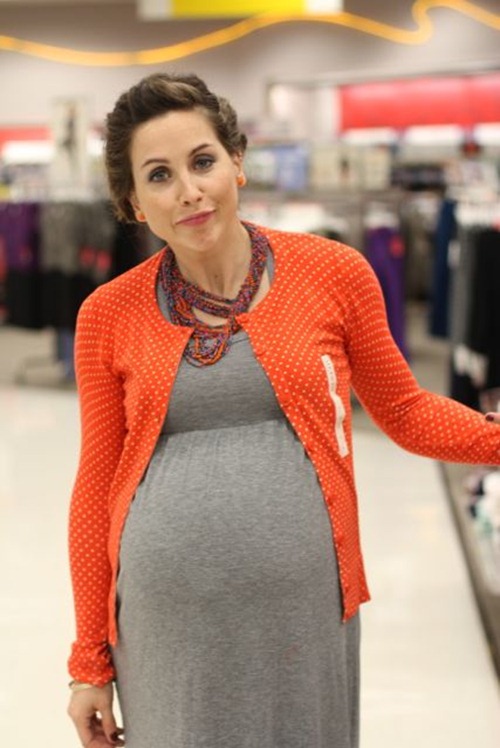 For me, it was the orangey-red version (although my less-than-enthused expression betrays the fact that I felt like an overripe tomato). 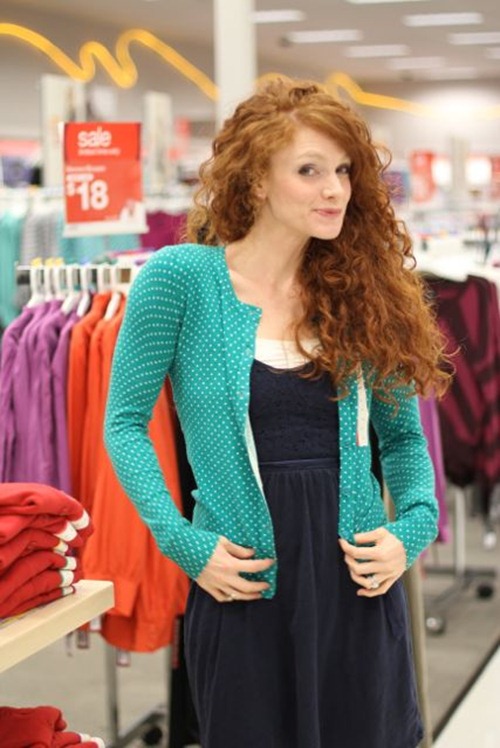 And Mandy was a fan of the teal version (though, really, you know I was too!).

So, did either of us actually buy one?

I actually liked mine on a lot better than I thought I would, and Mandy looked super-cute in hers too, but they weren’t on sale, and we’re both a bit picky about what we choose to “splurge” on.

So…here’s my question for you?

On a scale of 1-10, what’s your opinion of that cardigan on me (try to edit out the big belly when you pick your number)?

And, how much do think it would be worth based on that rating?

(I have my own numbers already in my brain, but I’d love to get a second—or 32nd—opinion).

No matter what your opinion of the sweater, I think we can all agree on one thing:

Every girl needs a friend who will whisk her off for a night of yummy food, relaxation, and good conversation when she’s having a major case of the I’m-still-pregnant blues (or any other kind of blues, for that matter).

And I feel very blessed to have one of those myself.

Thanks for the pick-me-up, Mandy!

It came just in time to save my husband and kids from a very cranky wife/mama.

P.S. As we were trying on our cardis, a man walked by and did a major double-take at my belly.

And I thought, “Seriously, dude, I know it’s rather massive, but you could at least try to hide your surprise!”

And then he walked back the other direction a few minutes later and said, “Hey! Aren’t you that famous BODY PUMP instructor?”

Apparently, my belly is a celebrity!