Yesterday, I got an exciting email from a reader who just found out she’s having twins (at 10 weeks, which is a 9 week jump on my heads-up that I was getting a 2-for-1 deal; still trying to decide if that’s a good or a bad thing). It was exciting for me, at least. Because I have twins (newsflash!), I’ve already gotten past the hardest part of the newborn stage, and I have yet to traverse the minefield of Terrible Twos TIMES Two.

So, ask current day me what having twins is like, and I say annoyingly perky things like, “SO much fun! I really think everybody should have a set!” (Until they’re simultaneously hungry, screaming, and poopy, that is). People tend to back away from me slowly when I say things like that. As if I were to touch them, I might accidentally transfer my twin-birthing power, and—BAM!—preggo X 2! (Wouldn’t their husbands be confused when they blamed that crazy fitness instructor at the gym for their predicament!)

But what this poor blessed girl really wanted to know is: will I survive? To which I could only answer: yes, by the grace of God! (Yeah right, that’s all I said; my answer was more like a doctoral dissertation).

(Ha! Apparently, the twins’ ears were burning because they both just started fussing from their pack n’ play where they are “napping”).

So…what is having twins like, really? Well, I was telling the truth before. It really is fun. Mostly because they do so many of the same things, but in their own separate ways.

Here are 5 ways that my girls are the same, yet different.

They both suck their fingers. 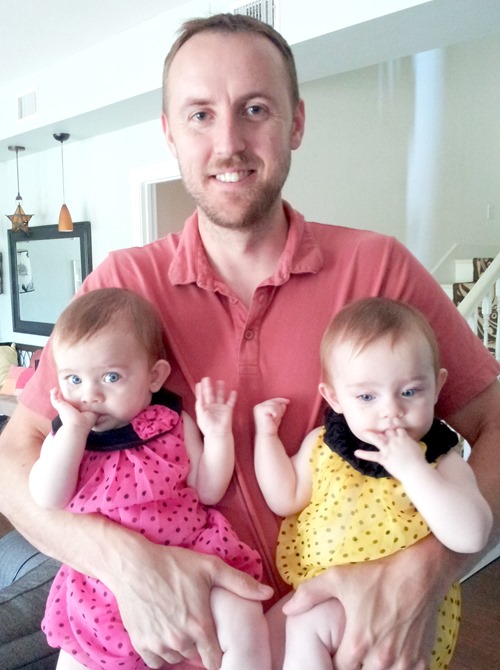 The twins never took to pacifiers, but they’re huge fans of their own fingers. Nola sucks the first two fingers of her left hand only (she tries the right hand every once in a while, presumably so it won’t feel left out, but the results are hilariously awkward and ineffective). Evy is the most delicate thumb-sucker I’ve ever seen. Most kids plug that thing in their mouths like a sink-stopper, but she looks like she’s nibbling at a delicacy, almost like she’s afraid that if she sucks too hard, it’ll fall off (and that would be bad). She’s also an equal-opportunity sucker and is equally proficient with her right and left hands. In fact, if she’s especially in need of comfort, she alternates between the two—almost as if to say, “Okay, that one’s no good. I wonder if this one’s working today.”

And, yes, I am really looking forward to breaking two toddlers of their finger-sucking addictions. 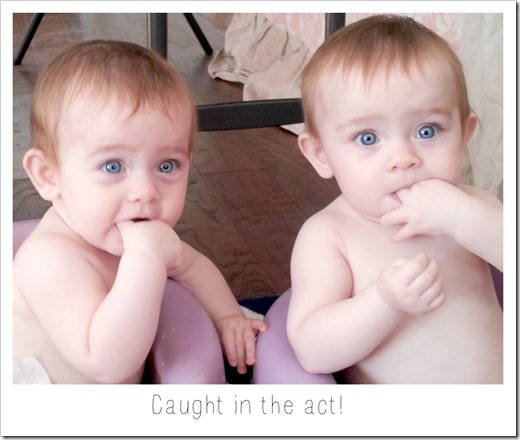 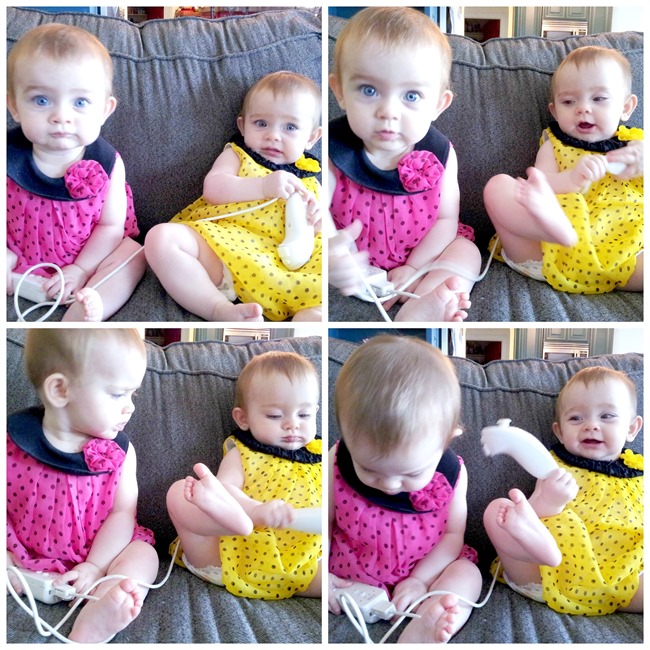 Although, it appears that Evy takes her remote control (ha, ha. get it?) a tad more seriously than Nola. And, honestly, if I had to guess about their future personalities, I’d have to say that that’s pretty spot on.

They’re both prone to silly faces. 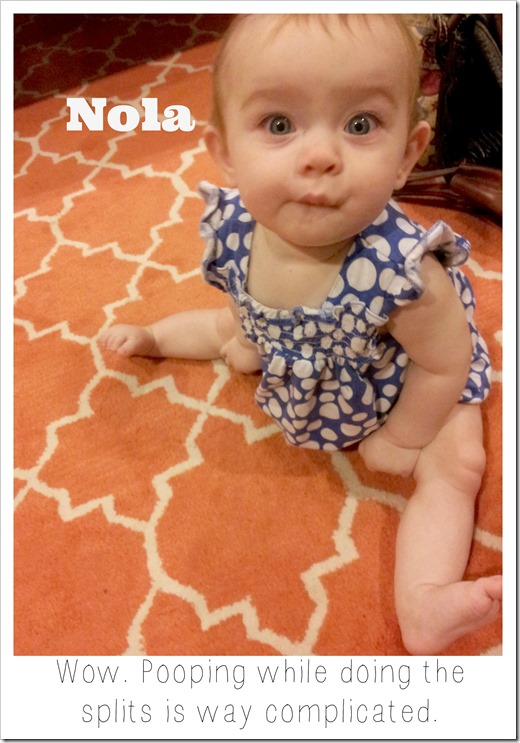 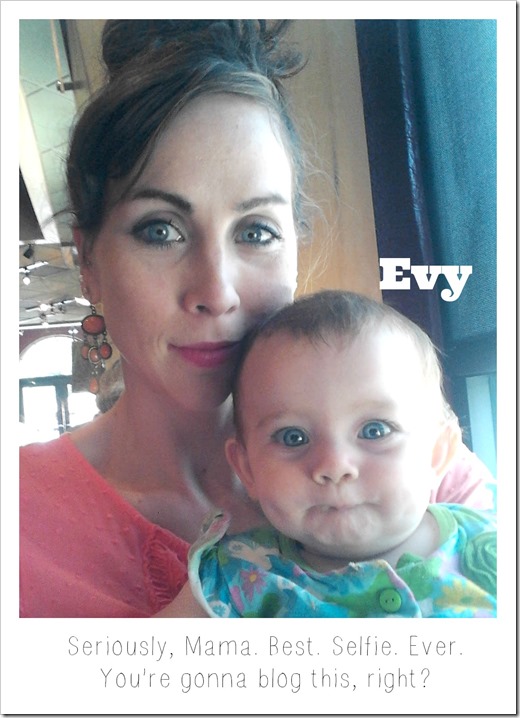 They both love shopping. 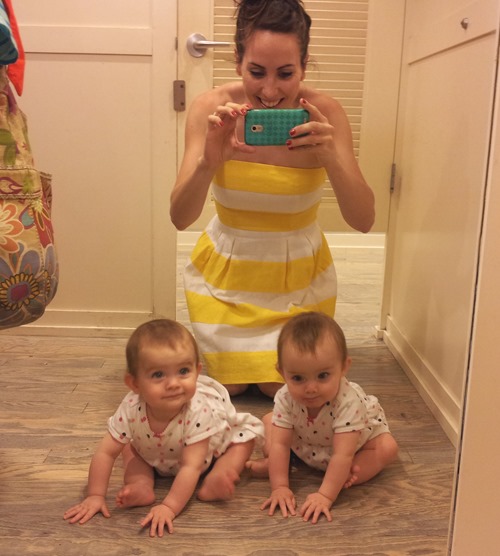 Okay, so “love” might be too strong a term (it’ll come). But when Mama puts them on the floor of the dressing room, they’re both equally willing to embark on a mission to find every last gum wrapper, dead bug, or discarded tag available for possible consumption. 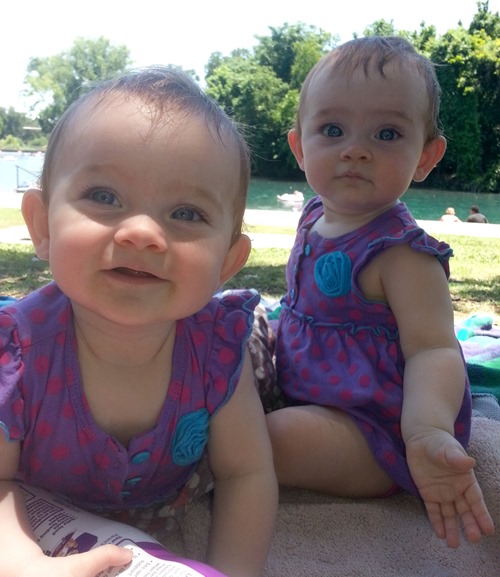 …but it would probably make people a lot happier if they wore their “N” and “E” onesies more often. 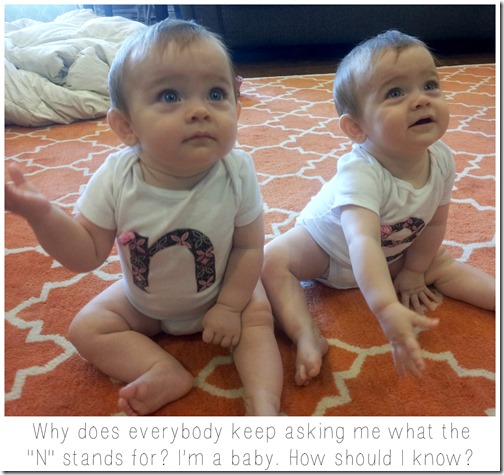 All of my good friends are able to tell them apart pretty consistently by this point, but I’ve had complete strangers tell me I couldn’t possibly distinguish who’s who (despite my adamant declarations that I can, with zero difficulty).

I suppose I could have them wear their initials all the time, but then, how could the complete strangers be sure that I’d gotten it right when I dressed them??!

P.S. My sweet friend, Lisa, made those adorable monogrammed onesies for the girls, and I absolutely love them!