We were all very happy to get Daddy back from his work trip on Saturday, but I’m not gonna lie—we had a lot of fun while he was gone. The kind of fun that has you falling asleep seconds before your head hits the pillow at night. The kind of fun that leaves Mama saying, “If we have any more fun this week, I may have to commit myself to a mental institution.” I’ll tell you more about that later (the fun, not the loony bin), but today is all about the culmination of a very busy (every single time my mom called, we were in the car driving to or from some activity or another) and exciting week.

And that grand finale was a trip to Six Flags Over Texas.

The best part? The group included 3 little boys and 2 mamas. No babies, no toddlers. Don’t get me wrong. I love me some babies and toddlers. But at a theme park on the last day of June in blazing Texas heat? I’ll pass, thanks.

I do believe this is the first time that I’ve gotten to do anything special for any extended period of time with just my boys since their little sisters came along, and I hope it will be a memory they will carry with them always (I know I will).

We rode roller-coasters (my barely-seven-year-old braved the Titan, the tallest, fastest roller coaster in Texas!)—some of which I might have “misdirected” Simon into riding, since he is just like I was as a kid and cannot be talked out of an irrational fear of “scary rides” if he can see what’s coming. (His face after he got off of The Runaway Mountain ride, which he only rode because it was in the dark, and I assured him it wasn’t “too fast,” was priceless—a mixture of terror and exhilaration).

We consumed trail mix and Oreos, juice boxes and Coke (of all flavors; it’s Texas, after all), Pringles and Cheetos, and probably several other really-bad-for-you things that my brain has blocked out due to being in survival mode as it tries to help my body process that much junk.

We screamed our heads off on the big dips and high-fived all around when we were done.

In the words of my friend, Liz, who was my partner in crime (along with her son, Jacob): 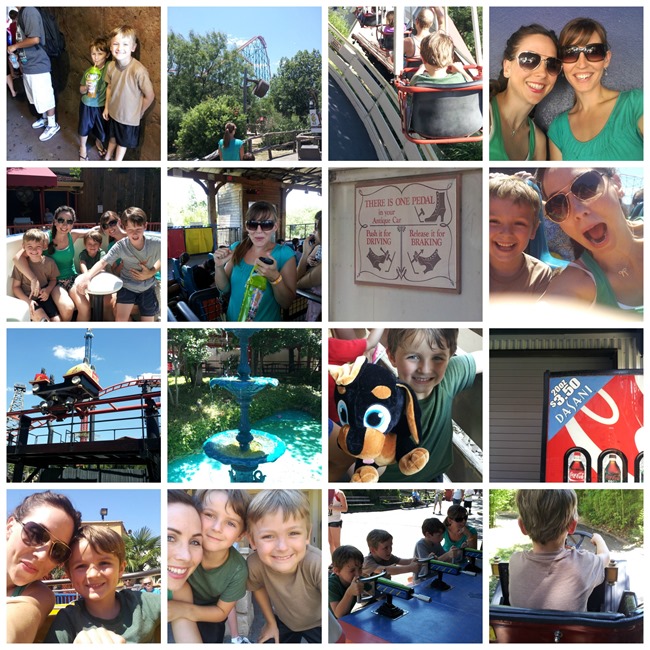 In no particular orders, starting in the top left corner and continuing in rows, we have:

Waiting in line for the Runaway Mountain ride (Simon was still clueless about the fact that, not only was there a “big dump”—his unfortunate term for any drastic dip—but there was also a vertical loop and plenty of other twists at high speeds, none of which could be seen since it’s pretty much pitch black).

Approaching The Titan, Texas’s tallest/fastest roller coaster (even I was a little nervous going clackity clackity up that ridiculously tall hill, and I’ve done it before).

My view of Simon on “the swings,” his and my last ride of the day and a welcome contrast to all the zooming and jerking of the roller coasters.

Liz and I indulging in a selfie while we weren’t too sweaty.

All of us aboard Six Flag’s version of the Tea Cup ride.

Liz doing one of her many motivational “Woohooos!” as we all tried to convince ourselves that we probably weren’t going to die while riding The Titan.

Antique Car ride instructions. It seems simple, but it was still a challenge for a 7-year-old whose only driving experience is sitting on Mama’s lap while we drive the trash down our long driveway to load the bins (shhhhh…don’t tell).

Ezra’s and my reaction to the realization that we’d survived the Titan.

The Pandemonium ride. The car actually spins around as you ride the roller coaster. Be still my stomach.

The stuffed dog Simon won (it only cost me $9. cough).

A theme park staple: ridiculously overpriced water. We stuck with the refillable $14 souvenir cups. (I think we squeezed in 6 refills between the three of us, and we brought the cup home to fight over use. Eh. Could have been worse).

Simon and I, showing off our matching dimples.

A selfie with my boys. LOVE them. They were so much fun to hang with all day.

A moment of intense concentration as three little boys vied desperately for that stuffed dog you saw Simon holding.

Ezra “driving” the antique car (there were rails in the center to keep the car from going too far to one side or another).

If it sounds like we had a blast…we did. The high was 90 degrees (and there was a nice breeze and lots of shade), and there were almost no lines (although you would certainly have never guessed that based on the fullness of the parking lot). We were there for almost 6 hours, and everybody loved every second of it!

And I have to say, screaming yourself hoarse with a 5 and 7-year-old is way better than doing it with someone your own age.

(And working off all those Oreos).

P.S. And a huge thank you to my incredible husband who watched all the little girls all day long the day after he got back from a very long, very tiring work trip. Pure gold, that man.