Hi, my name is Abbie, and I’m a feartrovert.

I mentioned on Monday that, although The Declare Conference was fabulous, I did not enjoy every single second of it. And then I told you that I would explain what I meant later. And I’ve been regretting saying that ever since.

(noun: one who allows social interactions to be tainted by fear or anxiety).

And, as soon as I said that, I realized that once I did explain, there was at least a 78% chance of my sounding like a maladjusted weirdo, which would, of course, result in your despising me and refusing to ever read my blog again and maybe spending actual minutes of your day telling others about what a weenie I am. 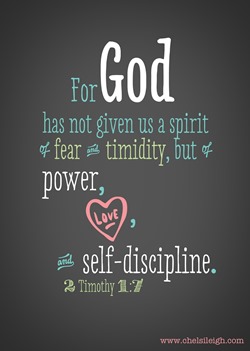 I’ve been seeing this post debunking common myths about introverts popping up in a lot of my friends’ Facebook feeds and thought it was an interesting read, especially since I related to several introverted traits, even though I’ve never thought of myself as an introvert. Truth to tell, I’ve never thought of myself as an extrovert either. I’m not a big fan of labels, helpful though they often are.

Instead I just know things about myself—things like: I like being around people a lot, but I like being by myself just as much (if not more, depending on the day). I also get a bit jittery at the mere thought of conferences full of women, talking and sharing their feelings and going on about dreams. A big part of me would rather sit on the couch behind my computer screen and just chat with you guys. And even though I love meeting new people, after an entire day of it, I need an entire night of recuperation at home with my family.                                               {via}

Of course, none of these things are either bad or good. They just are. And I’m fine with that. I have been know to call myself “the most unsocial social person you will ever meet,” simply because I am likely to be the one telling stories at a party (which I enjoy) or even compulsively filling the awkward silences (which I do not), and I’ve always been a teacher and an entertainer (in a very small capacity), which feels natural to me. BUT I probably wouldn’t choose the situation that got me into story-telling mode over a night at home with my husband or sometimes even just watching a movie alone (which, yeah, never happens these days).

When a true extrovert tells me that they are energized just by being in a room full of people, I inwardly cringe a little, which tells me that—nope—that’s not me.

And when my sweet new friend, Heather, and I were having a conversation about the woes of pumping for our nursing babies while at conferences, she said that just such an occurrence had been an unexpected boon for her because it forced to her to take a break from all the socializing and just be alone with herself (and God) to process things, even though she would have never chosen to be away from the social buzz on her own. I had to laugh a little because it was the first night of the conference, and I’d already snuck away to my room twice to hide a little. Not sure I processed much other than: is it too late to just go home?

Are you surprised to know this about me? My own mother was when I told her about the sneaking-away-to-my-room bit. I know I don’t come across as introverted in any way here (or in “real life”), and I’m not even sure if I am, but what I do know is that whenever I bypass introverted and extroverted altogether and become feartroverted (because it’s certainly not a constant state), I am no longer being the complex, neither-this-nor-that-and-that’s-okay child of God I was created to be. I am no longer listening to the guidance of my loving Father who wants to use my specific personality to bring Him glory. Instead, I am heeding the Enemy’s lies.

I am not good enough at singing to star on Broadway. And that’s fine.

But when I’m sitting on my hotel bed instead of attending a session because I’m not good enough to be out there mingling with other Christian bloggers, there’s something wrong.

Of course, the reasons I was sitting on that bed were much more complex than that. Because I know that comparison goes both ways, and I could probably find somebody out there that I felt better than to boost my morale from the blow it had taken after noticing all the people who seemed to be doing this blogging business so much better than I.

Another lie I believe when I give into the fear is that:

I don’t honestly even know what “make it” means. But as I rambled on to my husband, who was talking me down from my {mild} panic attack, my number one concern was the enormous amount of work and commitment and stress and work and time and—oh yeah—work it would take to achieve my dream of traditional book publication. I mean, howamIsupposedtopullthatoffwith5smallchildrenandcounting?? (Takes deep draught from imaginary inhaler). And what about all these people here who have “made it” and who are still having to work so hard to keep “making it?” Ugh. Do I even want that? Is that what I’m called to?

Which brings me to yet another fearful lie:

No one would be interested in what I have to say anyway.

I mean, who am I? Just a mama. And not even a very good one at that. I mean, practically every other almost 3-year-old I know is potty-trained. Especially the girls. But not mine. What a slacker. Who am I to think I can tell anyone anything? Who am I to encourage anyone else to be a better Christian when I’m struggling to haul myself out of bed early enough to get my Bible reading done? Who am I to cheer fellow mothers on to discipline well when I just made a cutting remark to my 7-year-old for no good reason?

I just need to lower my expectations. I’m clearly not cut out for this make-a-difference business.

God would be better off using someone else.

Reading all of that, you’re probably amazed that I managed to peel myself off the bed and limp out the door to face a conference full of clearly better-than-me, over-the-top fabulous bloggers who were probably all laughing at me behind my back and rolling their eyes at my pathetic attempts to teach them anything.

The thing is, I was fine (better than fine!) for most of the conference. But pretty much all of those thoughts hit me hard and heavy during the15 minutes I spent making a few final tweaks to a presentation that I’d felt fantastic about 5 minutes before. I am so grateful that after I sent a mayday text to my husband, he called me immediately and let me pour my fears through my cell phone into his oh-so-wise ear. 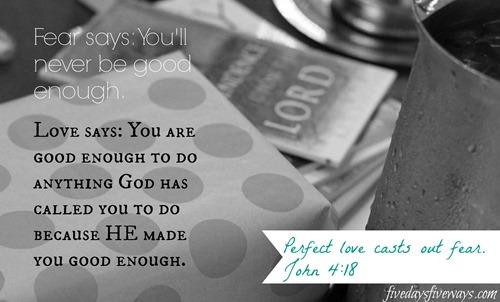 As he encouraged me and prayed over me, I began to remember important truths…like: I am good enough to do anything that God has called me to do because He has made me good enough. It has nothing do with my own merit or talents (which He gave me, by the way) and everything to do with His grace. Because “he who began a good work in you will carry it on to completion.” Also, I may never get a book published. And it is A LOT of work, but if I’m supposed to do it, and I’m willing to invest the effort necessary to do it well, God will be the one who determines whether I “make it” or not. Plus, as far as making a difference goes, as Shaun pointed out, if all I ever accomplished God ever accomplished through my writing was to encourage you in ways that you have already written and told me that He has, it would be enough.

By the time I hung up, I was feeling much better. Why? Because my Father loves me, and one of the best ways He shows it is through my husband’s love for me. Love’s like that. It delights in building up, not tearing down. Because “there is no fear in love. But perfect love drives out fear, because fear has to do with punishment. The one who fears is not made perfect in love.”

When I give into my feartroverted tendencies, I am not walking in love. Not only that, but (and it feels so arrogant to say it) I’m missing out on my chance to be perfect. Not in the way that the world defines it, certainly. But in God’s eyes.

The feartrovert in me wouldn’t have let me leave that hotel room to give my “Making the Most of DIY Blogging” presentation—a topic which seems so trivial on the surface but which segued into a heartfelt conversation afterwards about balance and comparisons and expectations with a fellow young mama and a precious, seasoned Titus 2 lady who both admitted to struggling with all of the same issues but were determined to soldier on in their calling until such a time as God made it clear that they had a new one.

I write all of this for two reasons:

1) I need to hear it. It helps me to record it, acknowledge my tendencies, and then give them to God. I’m not wallowing. But I am being honest.

2) You need to hear it. Even though I attempt to keep it very real up in here, I still get the occasional, “You. are. Wonder Woman” comments. And, oh, how they make me laugh. In fact, during the Q&A after my session, one of the sweet ladies said, “Oh man. I feel so behind. I mean, here you are doing all this, and with 5 kids. And I’ve only got 3…” And I interrupted her and said, “You want to know what I was doing in my hotel room this morning? Hyperventilating. Because everybody here is so much more awesome than I am.”

Note to self: There is always someone that seems like they’ve got it more together than you do. And they just might. But you don’t know their story or the fears that Satan shoots at them like fiery darts hoping to send their God-given callings crashing down in flames.

Come to think of it…

Feartroversion is for the birds. I’d rather be a Godtrovert any day of the week.

42 thoughts on “5 Things Thursday: Confessions of a Feartrovert”