Last Friday, our sweet Della-Lou turned 4-years-old. (You can catch up on birthday posts with her 2nd and 3rd if you like).

For some reason, her birthdays, more than any of my other children’s, always strike a nostalgic chord with me. I promise I don’t have a favorite kid, but Della was my first girl, and I really think having her unlocked something in my heart that might never have been completely free without a little girl to love on. Which, obviously, makes her special in some ways. So, it seems strange to think that the tiny little elfin creature with the big blue saucer eyes like this all.the.time… 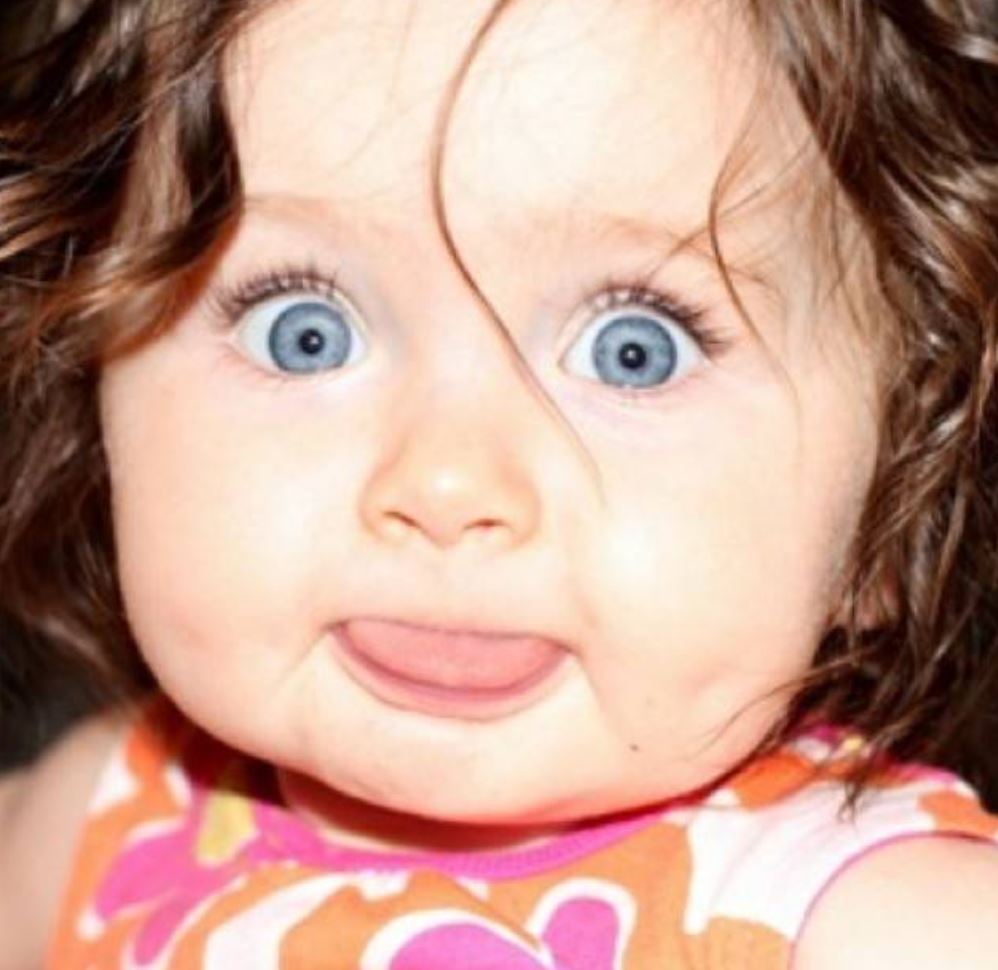 {Seriously. She looked constantly surprised. Also? How in the world have I been blogging long enough that she was this size when I started???!}

…is no longer a baby or even a toddler, but a “big girl” as she insists on calling herself. It’s all a bit much for this hormonal mama to take in. 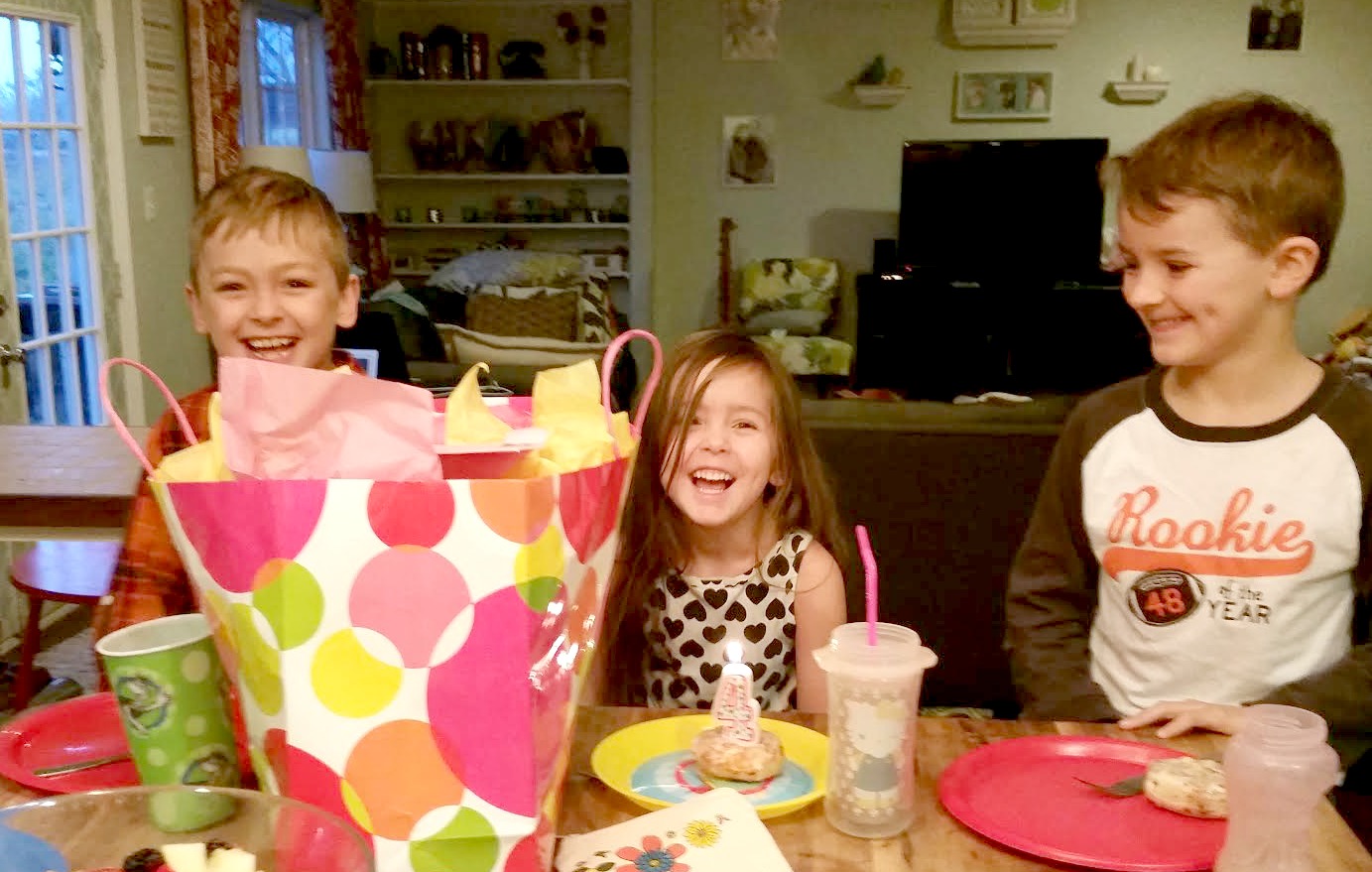 …mostly because she was so busy checking out her gifts (this is the first year that she has been fully aware of all the material perks of being the birthday girl). 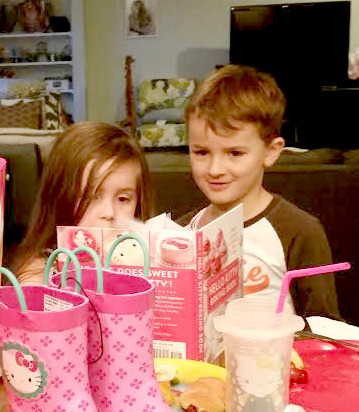 Can you tell she’s a “Hello Kitty Cat” fan? She was super-excited about that Hello Kitty Baking Book that I got for us to make HK treats together (honestly, I’m not a big fan of Miss Kitty–or any other branded paraphernalia, for that matter–but she doesn’t bare her midriff, wear tiny skirts, sport a bad attitude, or do anything else terribly objectionable–that I know of–so I’m picking my battles).

But Della’s favorite gift of all was this card from her big brother, Ezra. 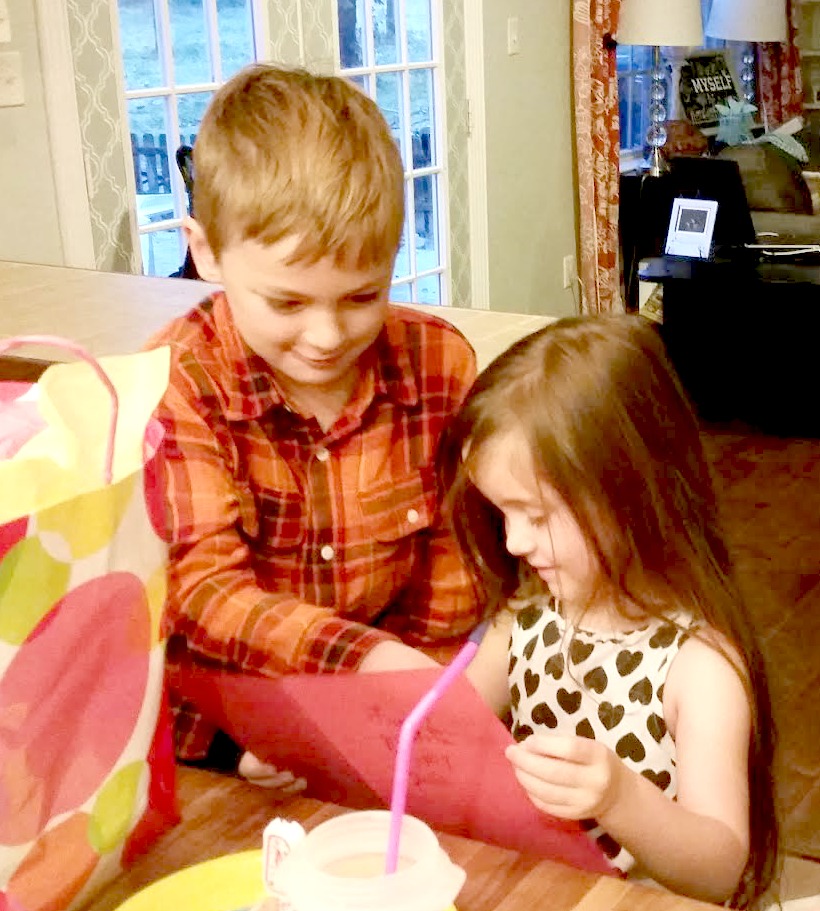 It said, “Happy Birthday, Della! You are the oldest and best sister I ever had! I love you!”  🙂 and had a custom, construction paper + Scotch tape pocket for $2 and some ice cream gift cards he had been hoarding.

The part she loved the most–even more than the cash–was what he had written for her. She kept looking at it and asking him to read it to her again. It made my Mama-heart skip a beat or two.

After breakfast, we jetted off to the gym since I had a class to teach, and then we headed to Target where Della got to use some birthday money from G. Grandma to buy whatsoever her heart desired. 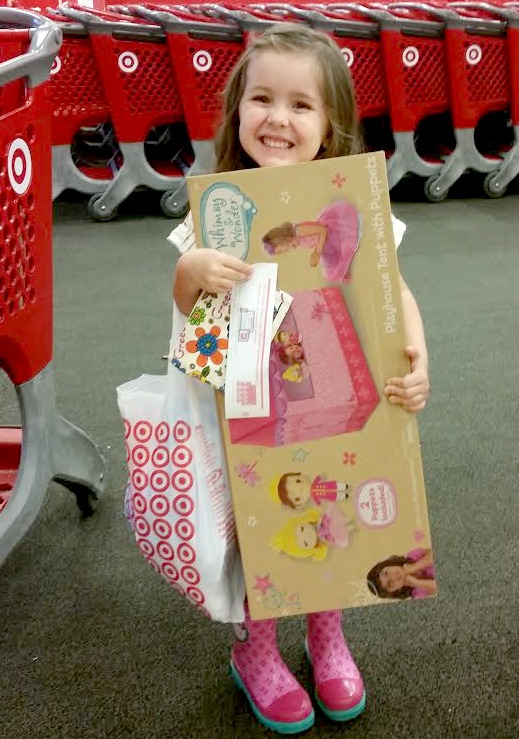 After quite a few, “Are you SURE that’s what you want to spend all of your money on?” prompts from me, she finally settled adamantly on this puppets + playhouse combo, and I have to admit that it was a pretty smart choice and has already seen its share of use (it’s currently residing on her bed, and she’s sleeping inside her “castle” at night).

After our shopping spree, we rushed home to get lunch ready for her “party.” I put quotes around that because, out of the two families we invited (through the super-formal method of texting), one couldn’t come because of sickness. (This seems to be a theme). And, if a party is supposed to have a) preparation b) a theme or c) more than a smidgen of effort put into it…

Then this didn’t qualify.

I’ll admit that I like the challenge of a themed, pretty party every now and then. But I’m rarely doing it for my children, since they would be just as happy with store-bought cake and a few streamers as they would with glass apothecary jars and matching favor bags.

Instead, I’m doing it for me–because I enjoy crafting and baking and that jazz. Until I don’t. Until it’s just too much. Because if no one cares but me, and I’m tired, and all the “jazz” is doing is detracting from the energy I could be lavishing on an actual human being…then the pretty is pretty much not worth it. Amiright?

Which is why the ONLY thing that I had specifically planned to do for Della’s birthday was a Hello Kitty birthday cake made by moi. 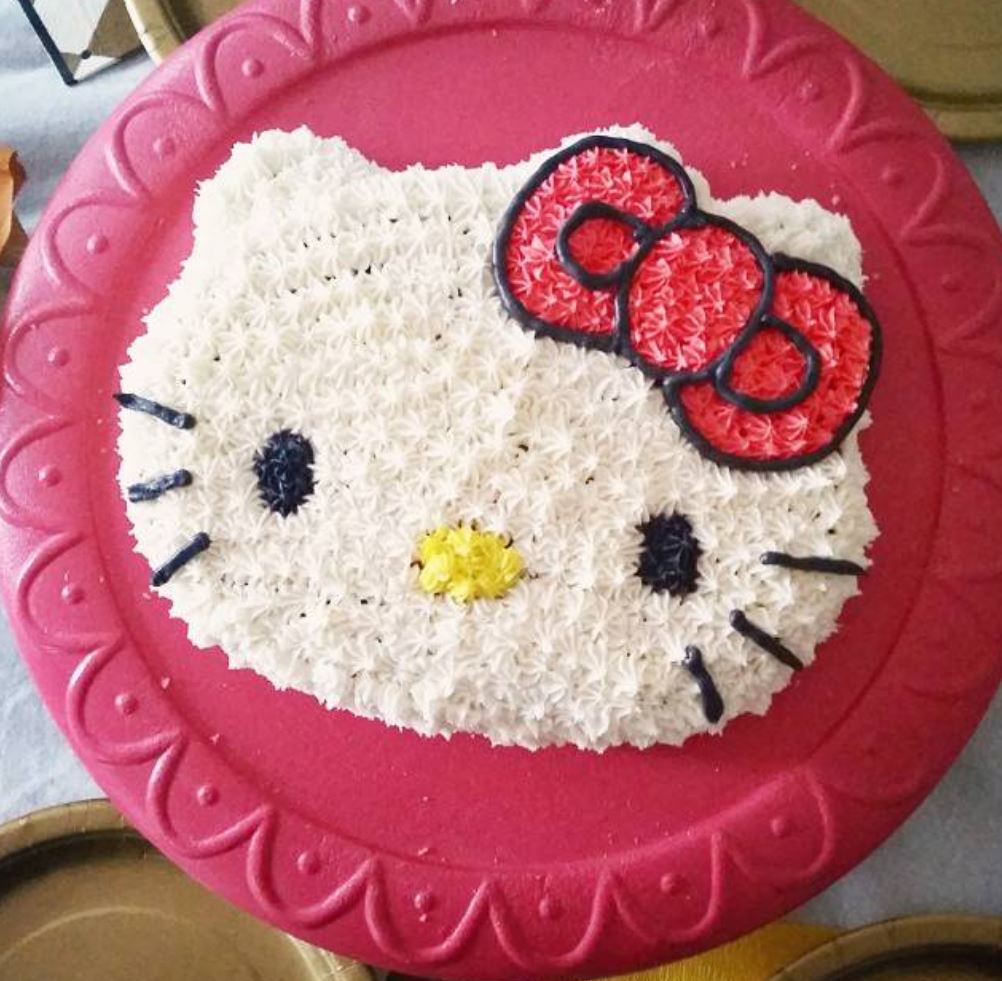 And even though I’m pleased with how it turned out, it was still a far cry from anything fancy (I ordered the mold from Amazon, used a boxed pink velvet cake, and iced it in 45 minutes flat using supplies I already had in my baking stash).

Since our “party” was so small, I had Shaun set up a portable table between the kitchen and the living room.

I had fully intended to throw some hoagie sandwich fixins’ on the table, plop the cake in the middle, and call it good. But then, when I was digging through my piping tips, I stumbled across a stash of hodgepodge, leftover decorations.

So…a polka dot disposable tablecloth, some yellow streamers, a lone pink balloon, some fun straws, and Dollar Store plates later…and we had something resembling an actual party going on! 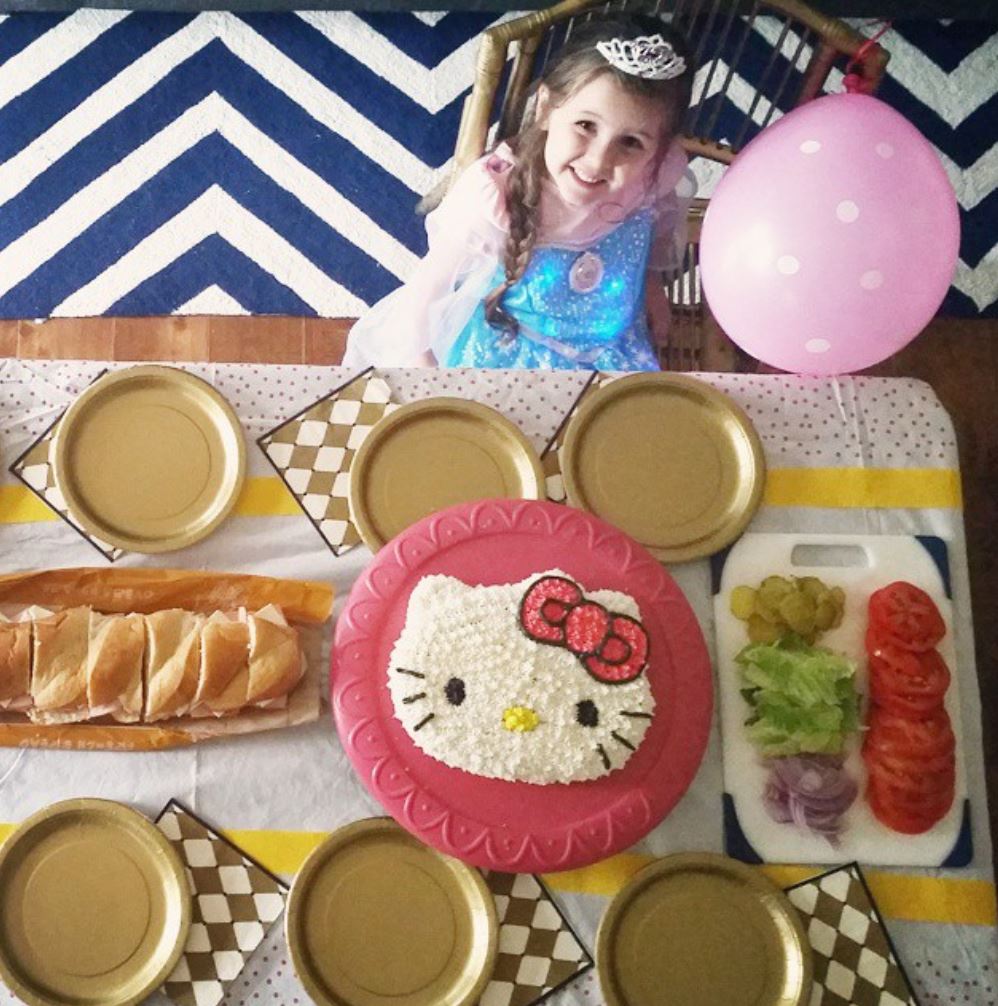 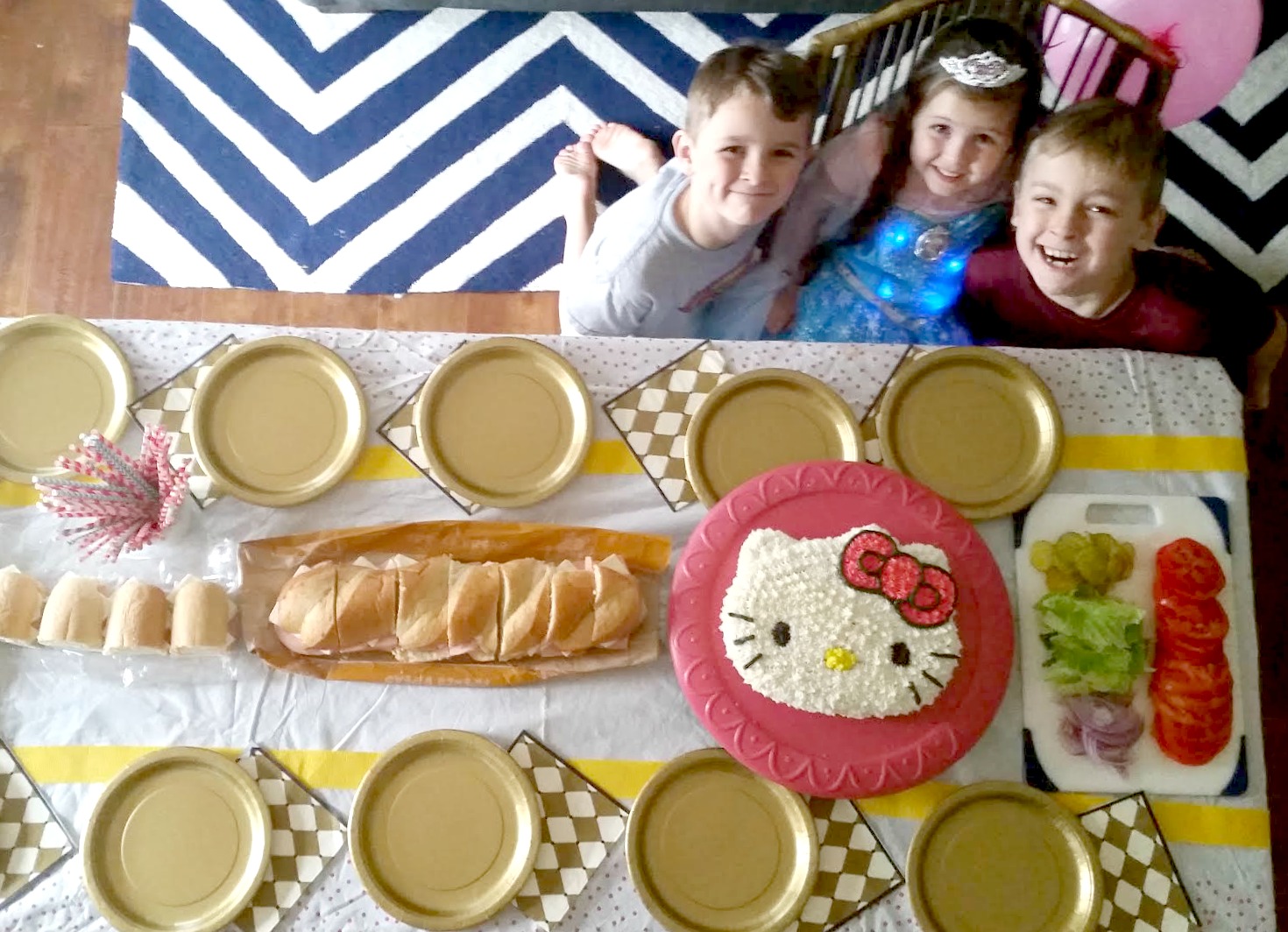 It felt good to do something festive for my girl. But I’m not gonna lie: it felt even better to not have stressed or slaved over every last detail.

None of our guests seemed to care about the less-than-photo-worthy decor.

The sandwiches got scarfed. The cake got inhaled. The proper songs were sung. And a grand old time was had by all.

Don’t get me wrong, y’all. There’s nothing wrong with a pretty party every now and then. But it’s also good for me to remember that my kids don’t care about pretty. They care about love. Even the wonky, tattered and reused tablecloth kind of love that ties a non-helium balloon to the back of the birthday girl’s chair and calls it a day.

Last year, I put a similar lack of effort into Della’s “party” and wrote these words on Instagram:

Della’s sooo excited about her “hello kitty cat” present. I am soooo excited about a super-informal playdate/birthday party at McDonald’s that involved zero homemade crafts, fancy chalkboard art, or elaborate desserts (I made the cupcakes this morning and had to “punt” after discovering I was short several ingredients, and they STILL turned out ok). Mamas: your little princess will NOT care one bit whether her party is Pinterest-worthy…unless you teach her to care. They just want love. And cake. Cake is good too.

I’m glad that I listened to my own advice again this year.

Especially the part about the cake. 😉

What about you guys? Do you also enjoy making pretty parties, or do you keep it prefer to keep it pretty simple? Obviously, I’m a mix. Sometimes, it feels worth it, but most of the time, not so much.

6 thoughts on “Della turned 4, and it wasn’t even remotely Pinterest-worthy!”