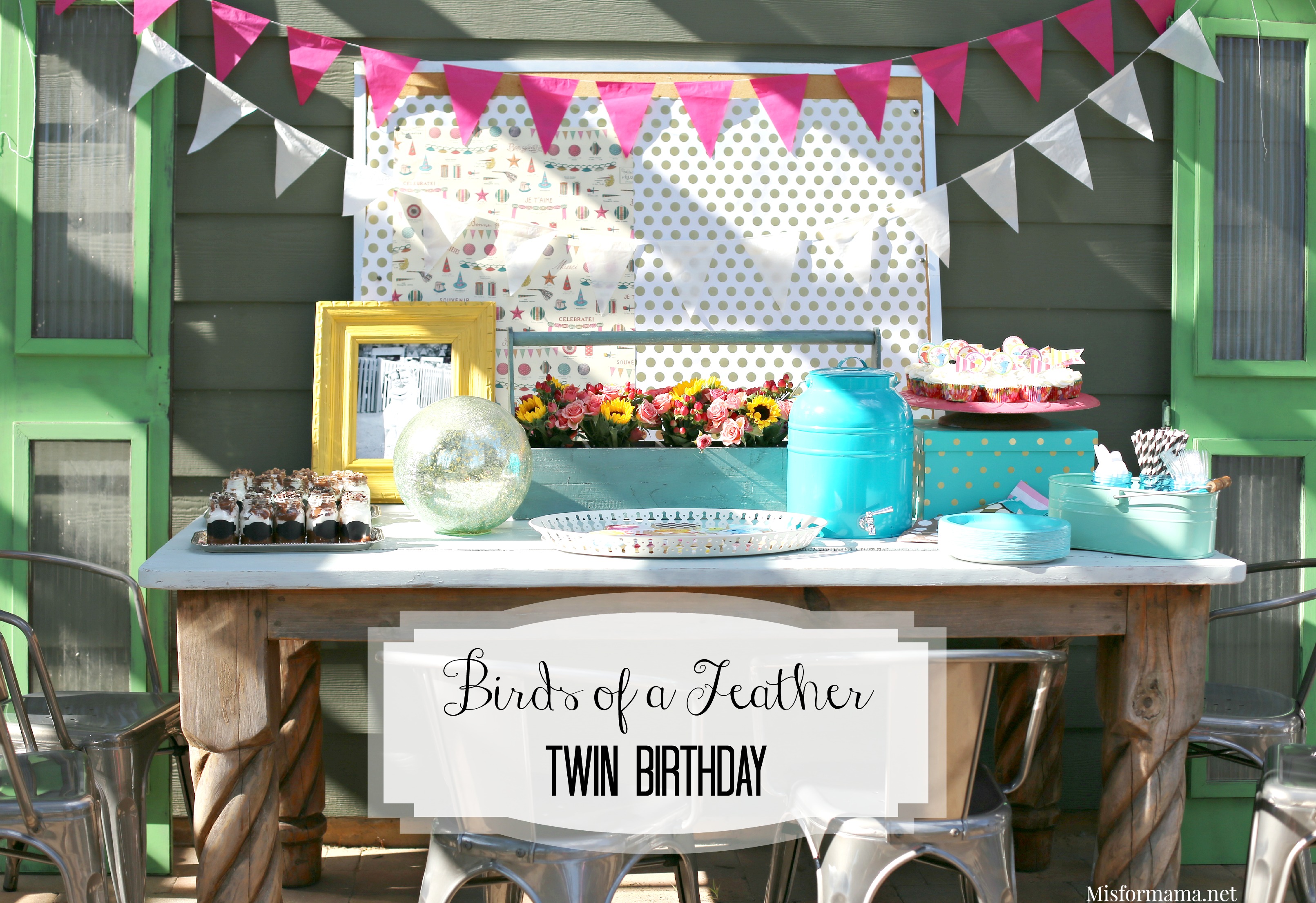 If I were to count how many of my parties have been inspired by random clearance buys…I’d probably keep going until I included every party I’ve ever thrown.

That’s just how I roll. Start with something cheap. Add a bunch more somethings cheap (or free), and end up with a hodgepodge that’s good enough for me.

In the case of the twins’ EXTREMELY loosely themed “Birds of a Feather” 3rd birthday party, the idea came to me when I spotted these cute cupcake picks in the deep discount bin at Marshall’s. 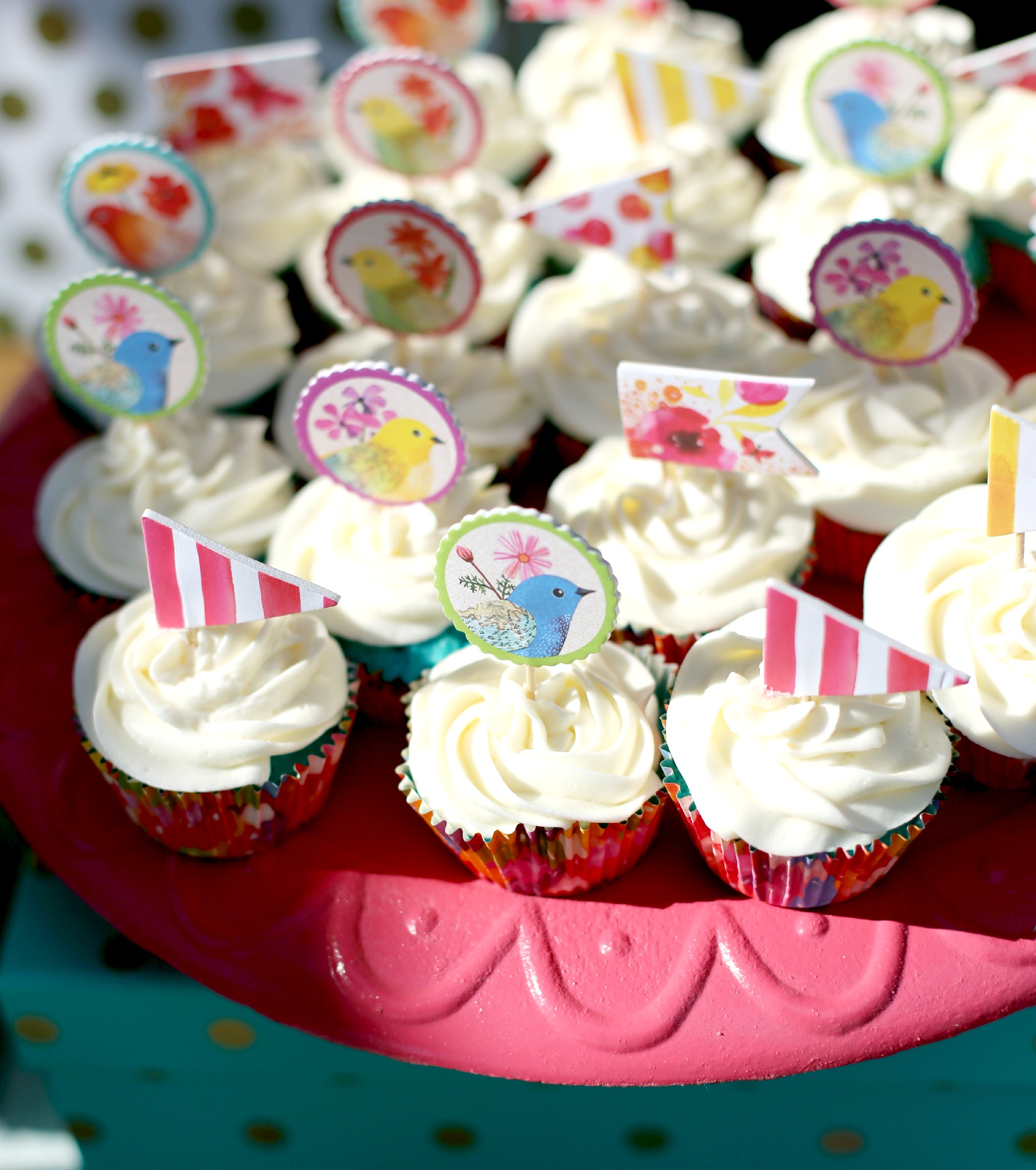 (PSA: the red and blue velvet Duncan Hines cake mixes are the best I think I’ve ever had. They call for butter rather than oil, and the texture/flavor is so good, even with all of the food coloring that must surely be in them to produce such vivid colors. Swirl a little homemade cream cheese buttercream frosting on top, and everyone will think you went to all the trouble to make the cake from scratch too!)

So…funny story. After I posted a bunch of furniture to that Facebook swap ‘n shop that I’ve mentioned a few times, I had several people ask me if I was a decorator and offered my services at large. My response was, of course, no. But then a couple more people asked, and I responded to one lady that, if she was serious, she could message me, and we could figure something out.

So, she did! And I went to her house and helped her decorate her dining room. And it was so much fun. Not only that, but she paid me in cookies. Which…sounds weird, I realize. But when you take into account the fact that she’s a highly sought after professional cookie-maker in our area and pretty much stays solidly booked, it was a pretty legit payment. 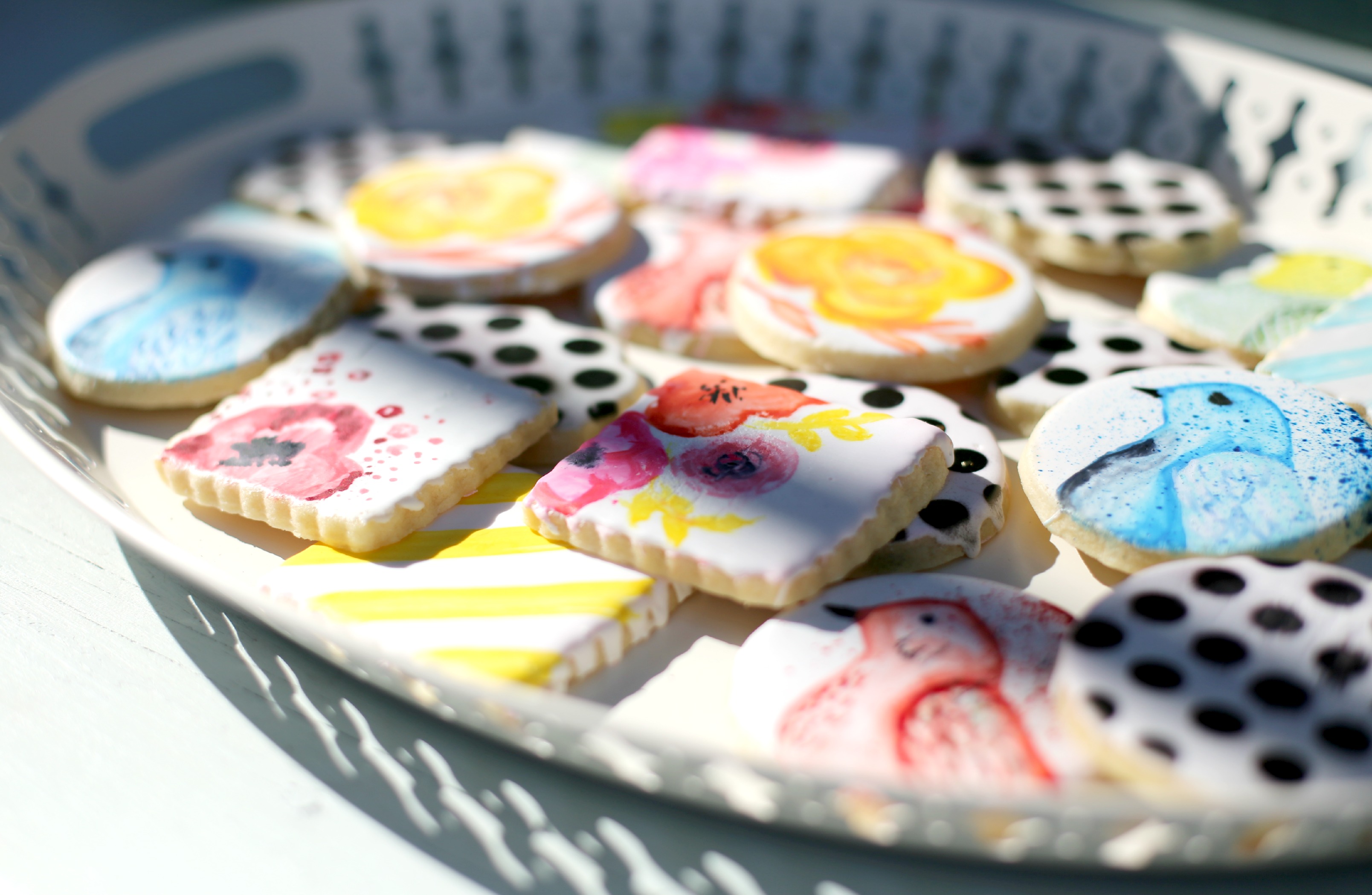 Seriously, they were like little pieces of artwork. I sent her pictures of the cupcake picks from above and told her that I wanted some black/white polka dots mixed in, and then she worked her magic. I almost felt bad eating them because they were so stinkin’ pretty. But the second I took a bite, I didn’t feel bad anymore because they were also delicious!  If you’re ever in need of some custom cookies in the East Texas/Tyler area, you totally need to give Robin a shout. You can find all of her info on her Facebook page. 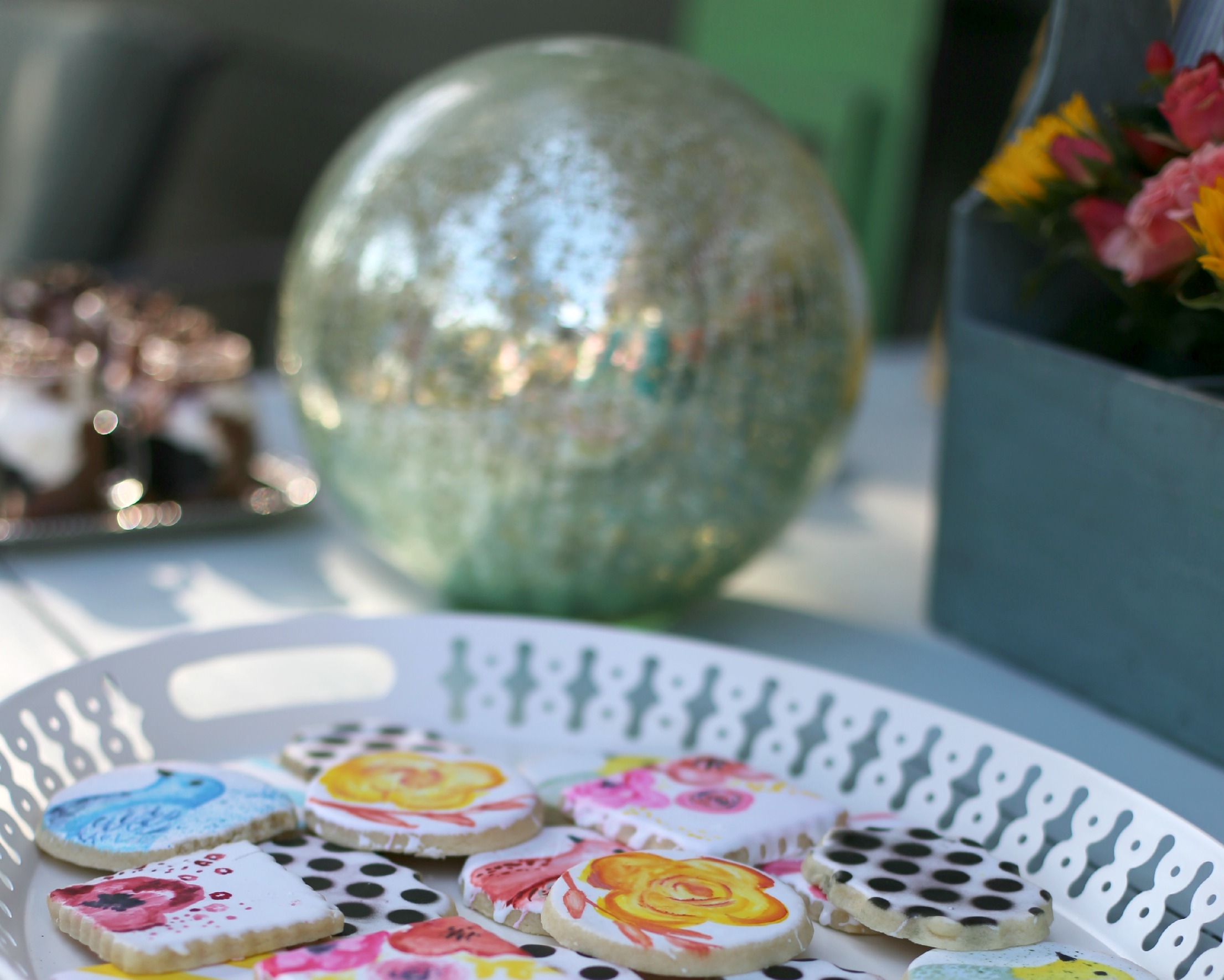 After I got my themed desserts set, I contemplated bird-themed outfits for the girls, but honestly, the second that I saw these adorable sets from The JimmieLee Boutique, all ideas of themed outfits flew (ha. ha.) out of my head. 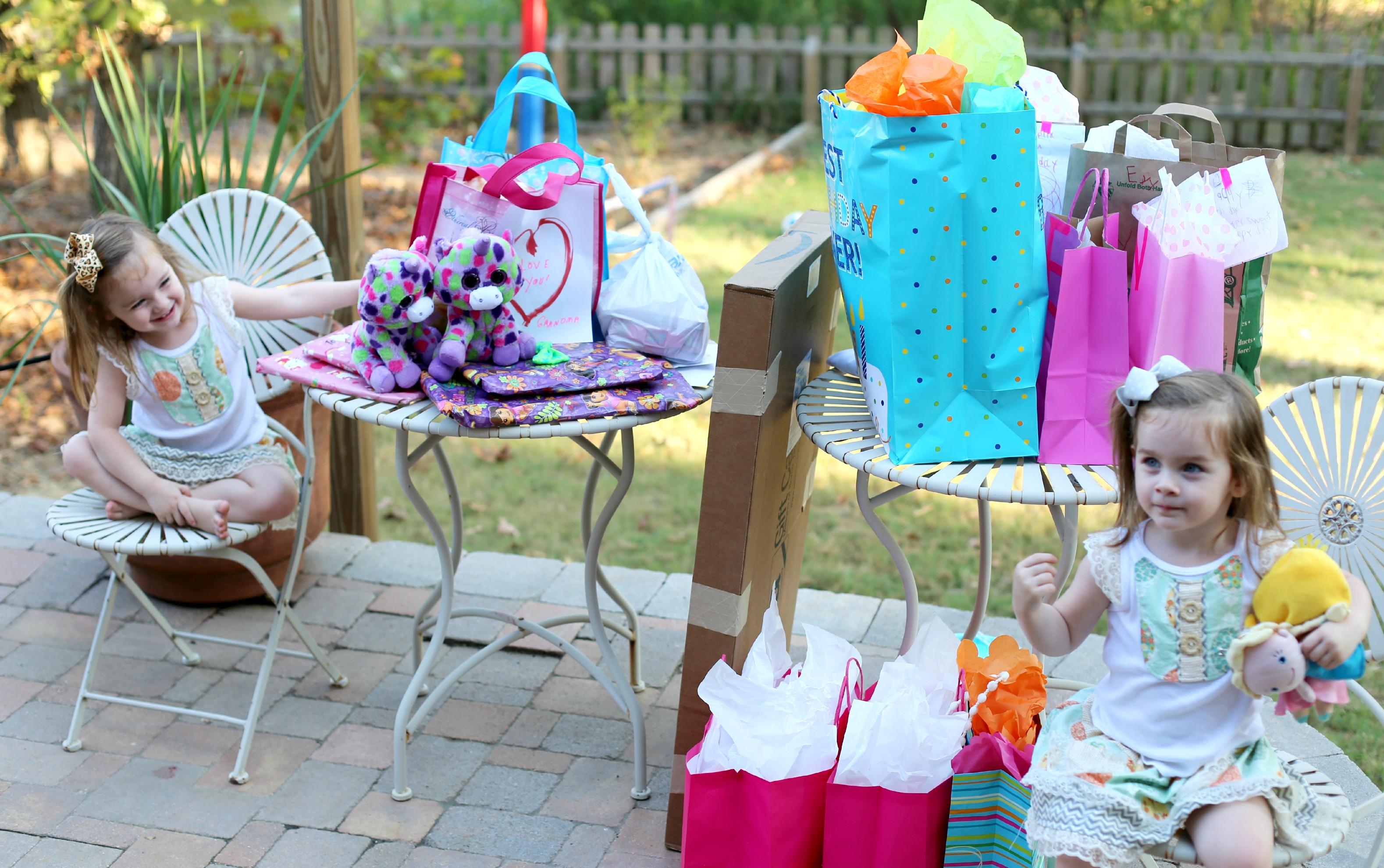 If you recall, these are the outfits that the twins wore when I took pictures for their 3-year-old update, and several of you asked me where they were from. So, now you know! Kayla is also local to me, but she can ship anywhere in the U.S., and I just love giving shout-outs to sweet, hardworking mamas. You totally need to go check her out (or give her a like on Facebook or a follow on Instagram @thejimmieleeboutique) Her stuff is adorable, and her prices are really reasonable! 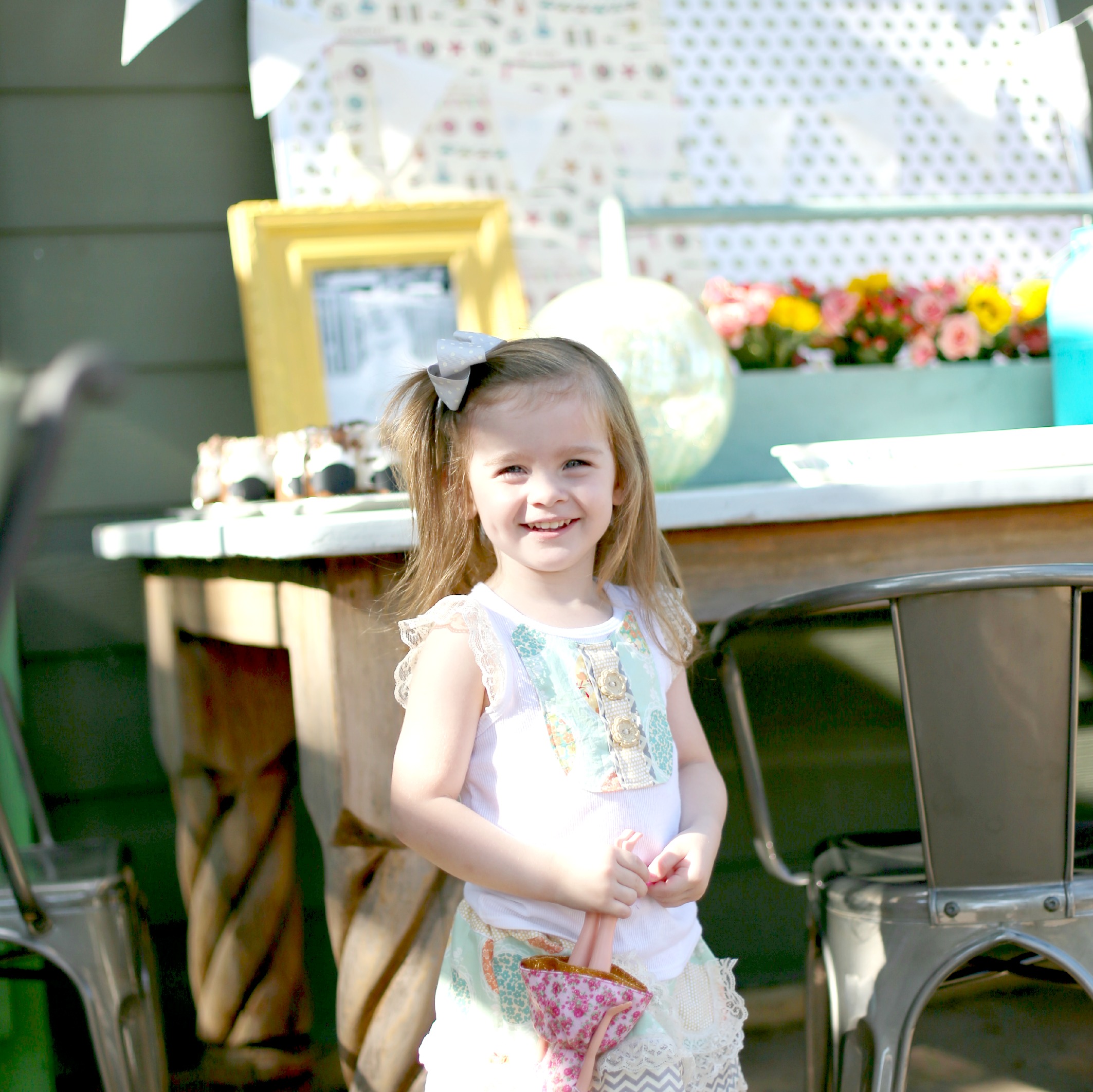 Last year’s party for the twins was almost a complete bust in terms of attendance (that’s what happens when a stomach bug starts making the rounds the weekend of your party). But this year, we had gorgeous weather and a great turnout. 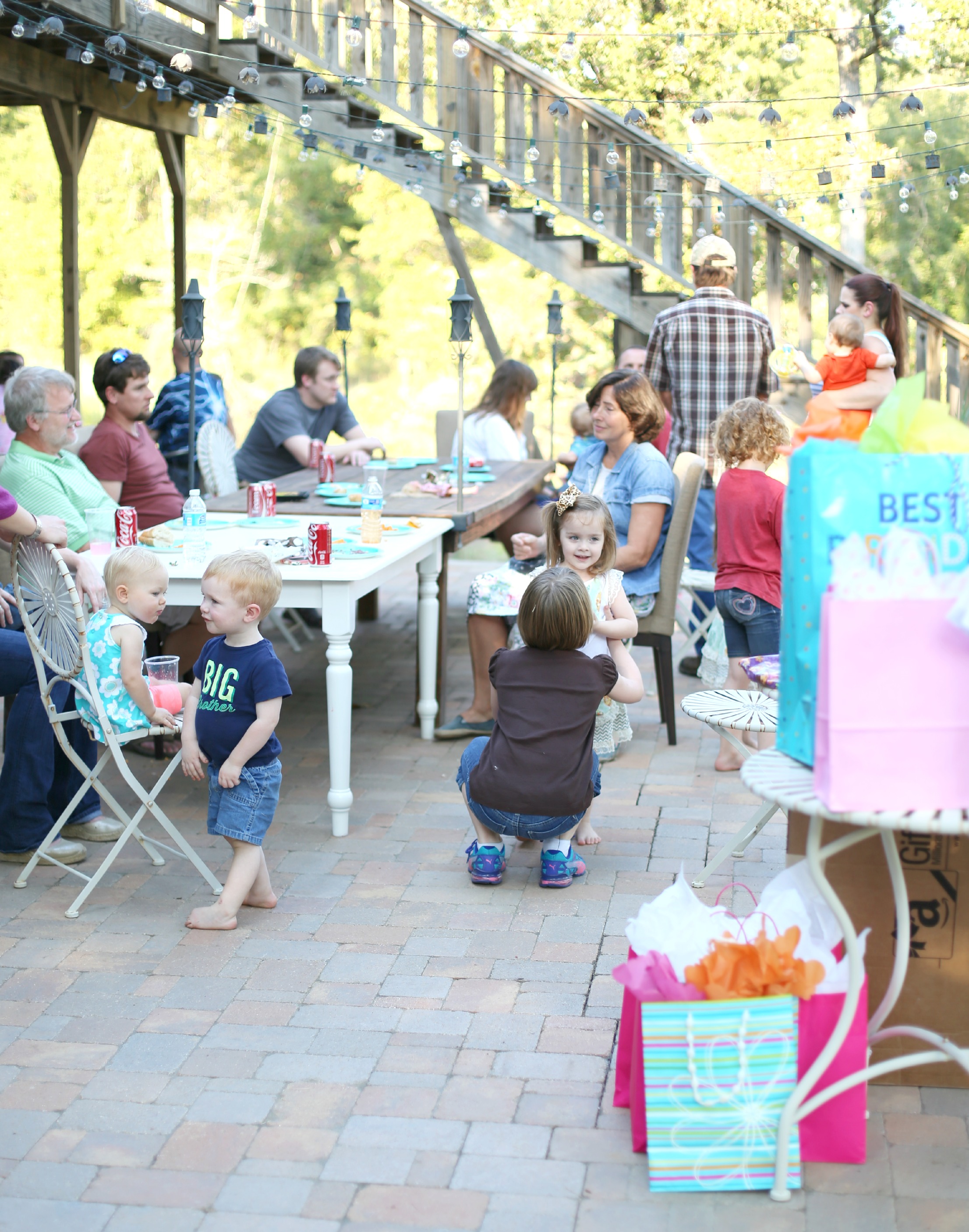 In lieu of one big cake, I threw together some easy pudding + whipped cream parfaits (because cookies and cupcakes couldn’t possibly suffice), and they were the biggest hit of the party! 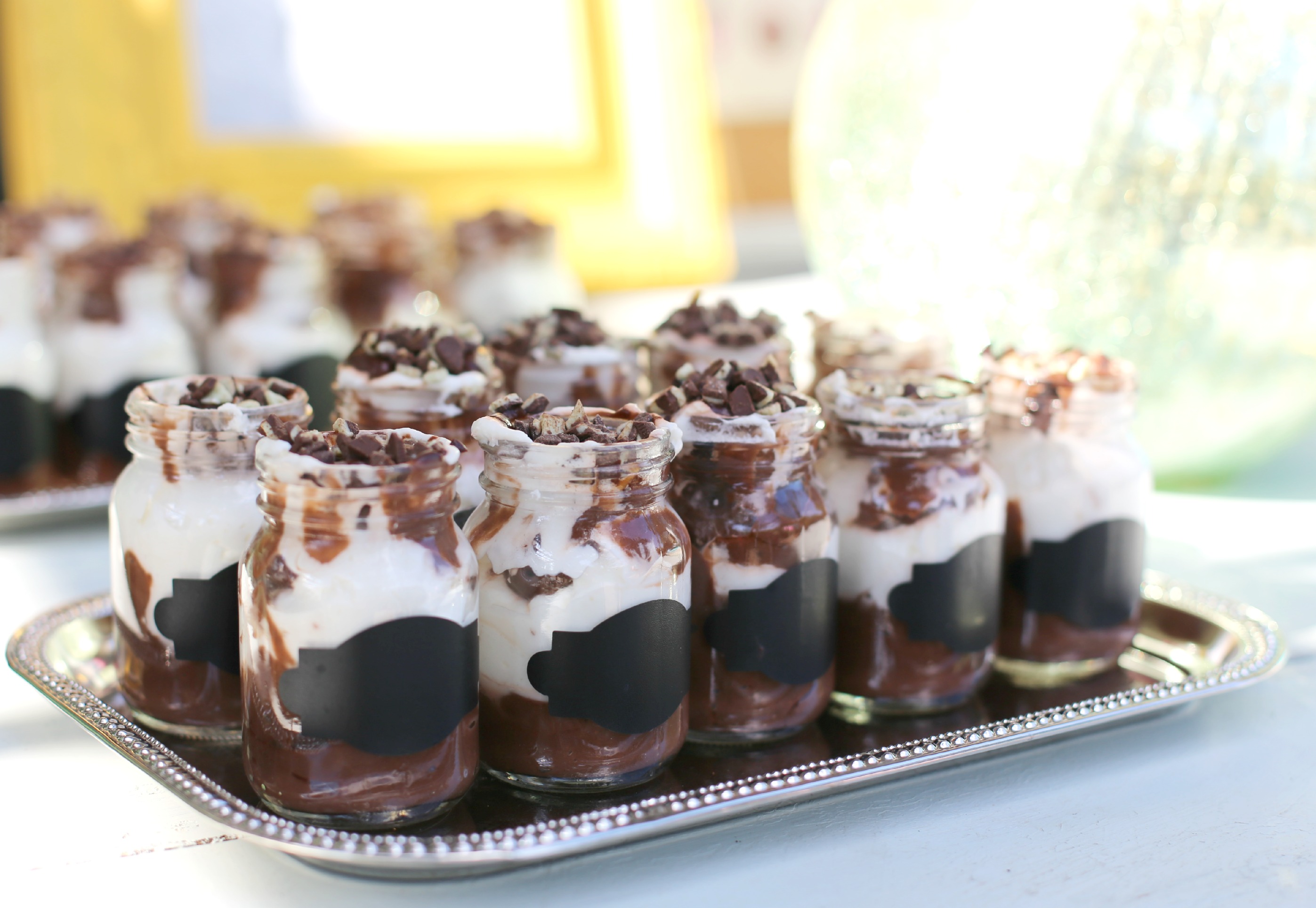 Seriously. They were there when I went inside to grab some more ice, and by the time I got back outside, they were gone, gone, gone. 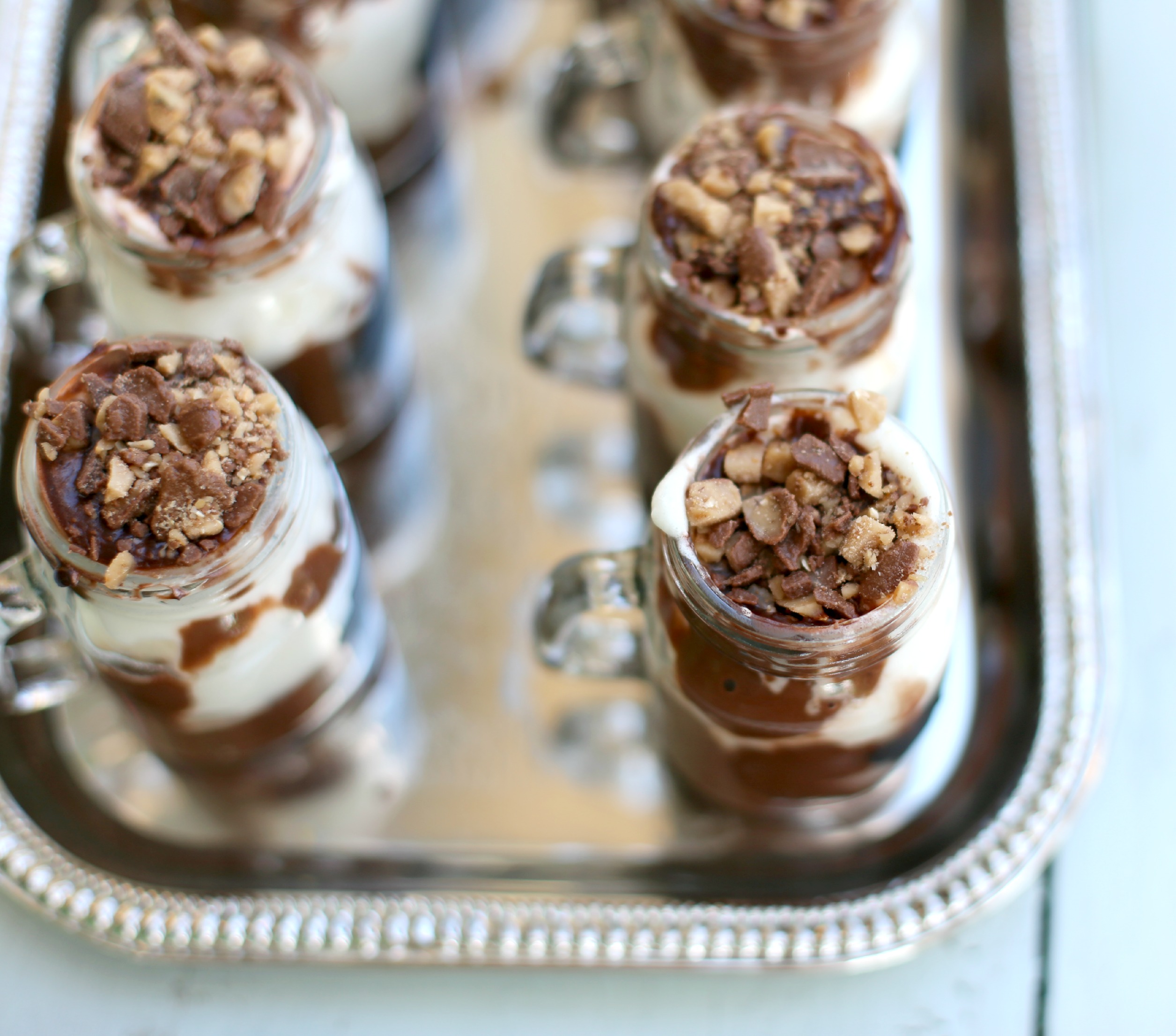 (Second PSA: sprinkle just about anything with chopped up bits of heath/chocolate and Andes mints, and people will go gaga for it) 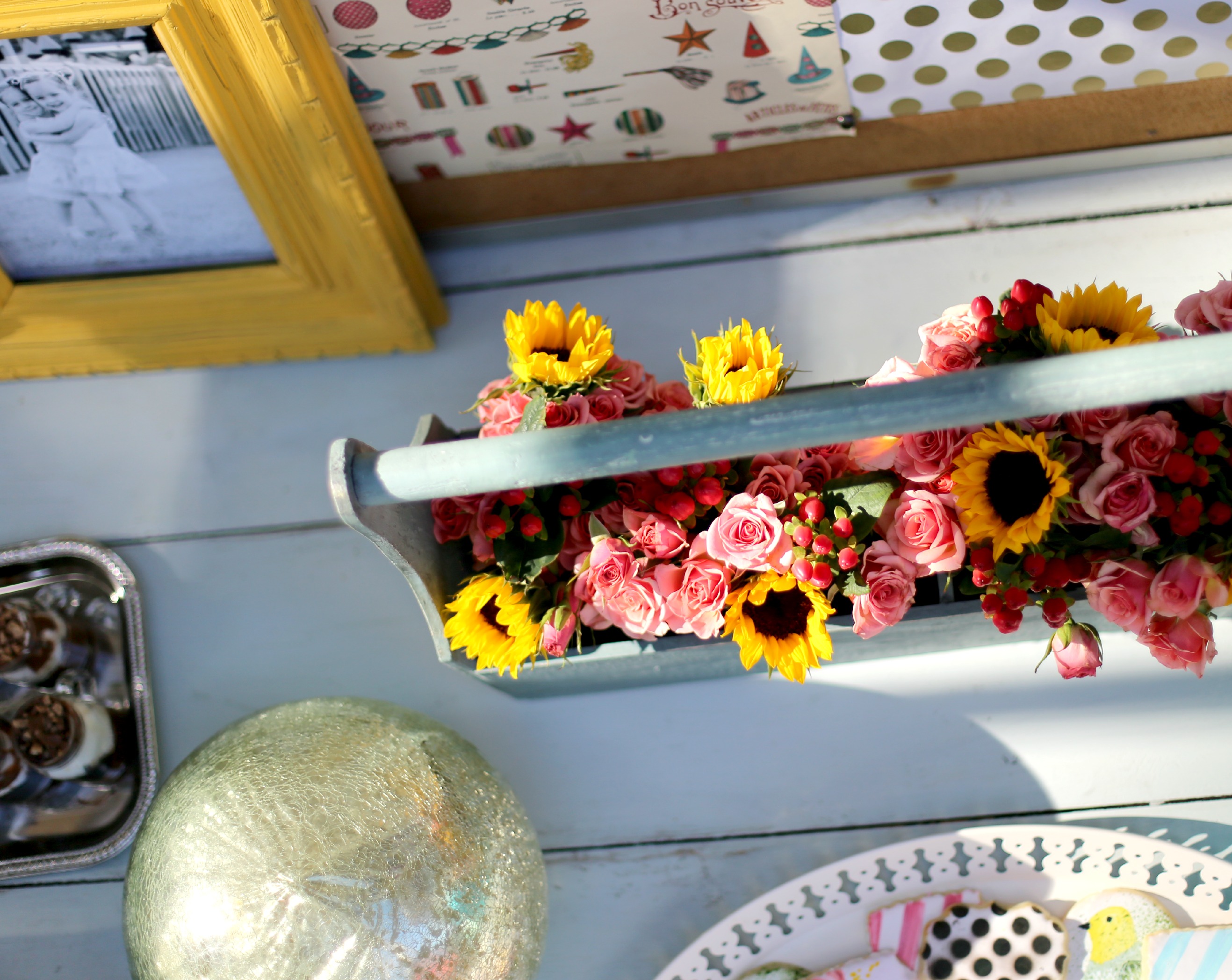 Oh, and while I’m being all bossy about party instructions, can I just encourage you to buy you flowers from Sam’s or Costco? I bought all of the flowers you see there for about $25 and split them up into 5 different mason jar bouquets, which I scattered throughout rooms in my house when the party was over. $25 for gorgeous party decorations plus fresh flowers in your house for a week afterwards is totally worth it in my book. 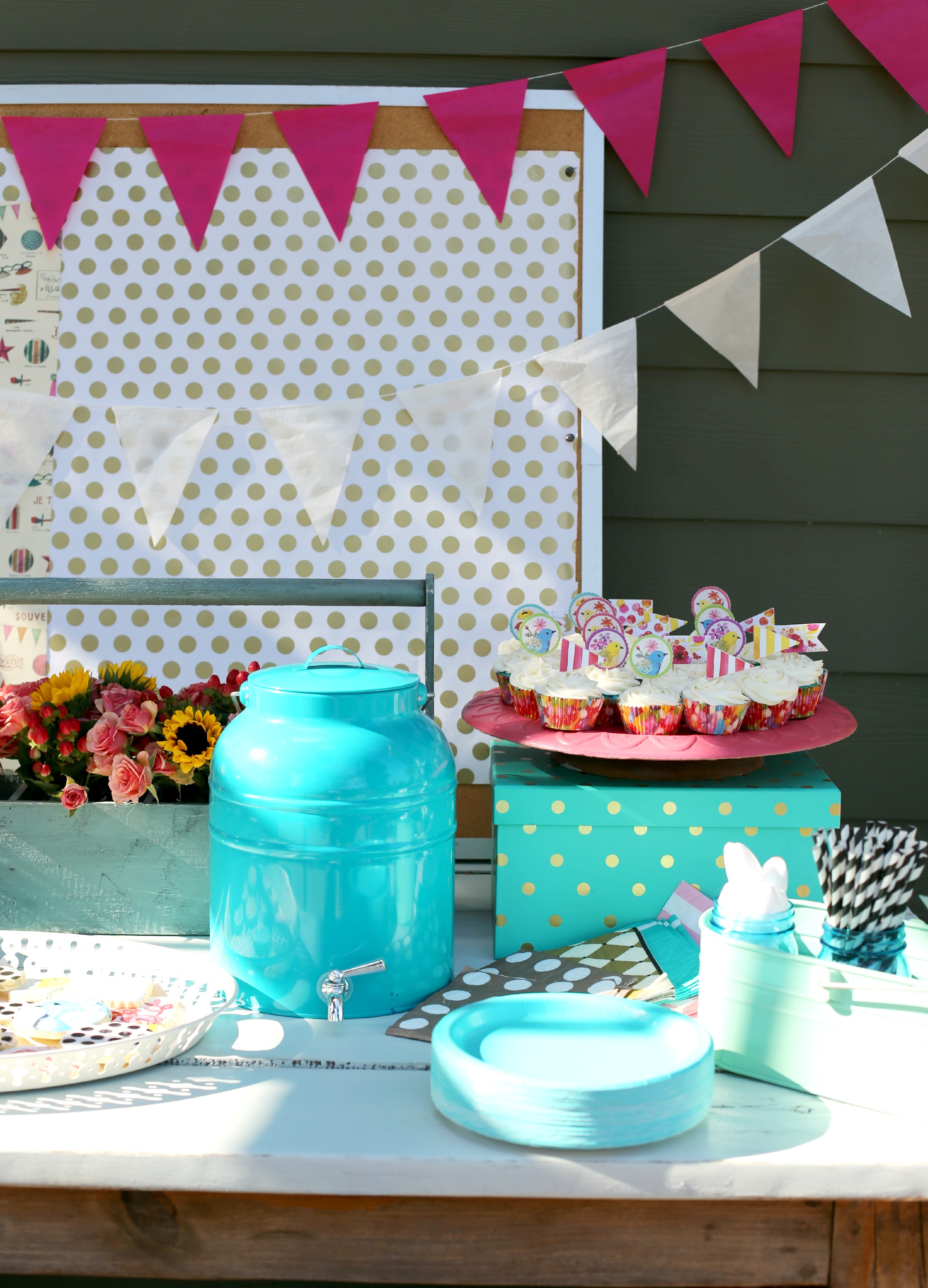 I joked on Instagram about how sometimes I try to go for neutral themes, and it never works out, and one person commented that if that’s what I was going for here, it was a total fail.

But the thing is that I always end up decorating a party table with things I have in my stash and recycling the same serving pieces over and over. And since I tend towards colorful staples, then the results tend to be kind, well, loud. 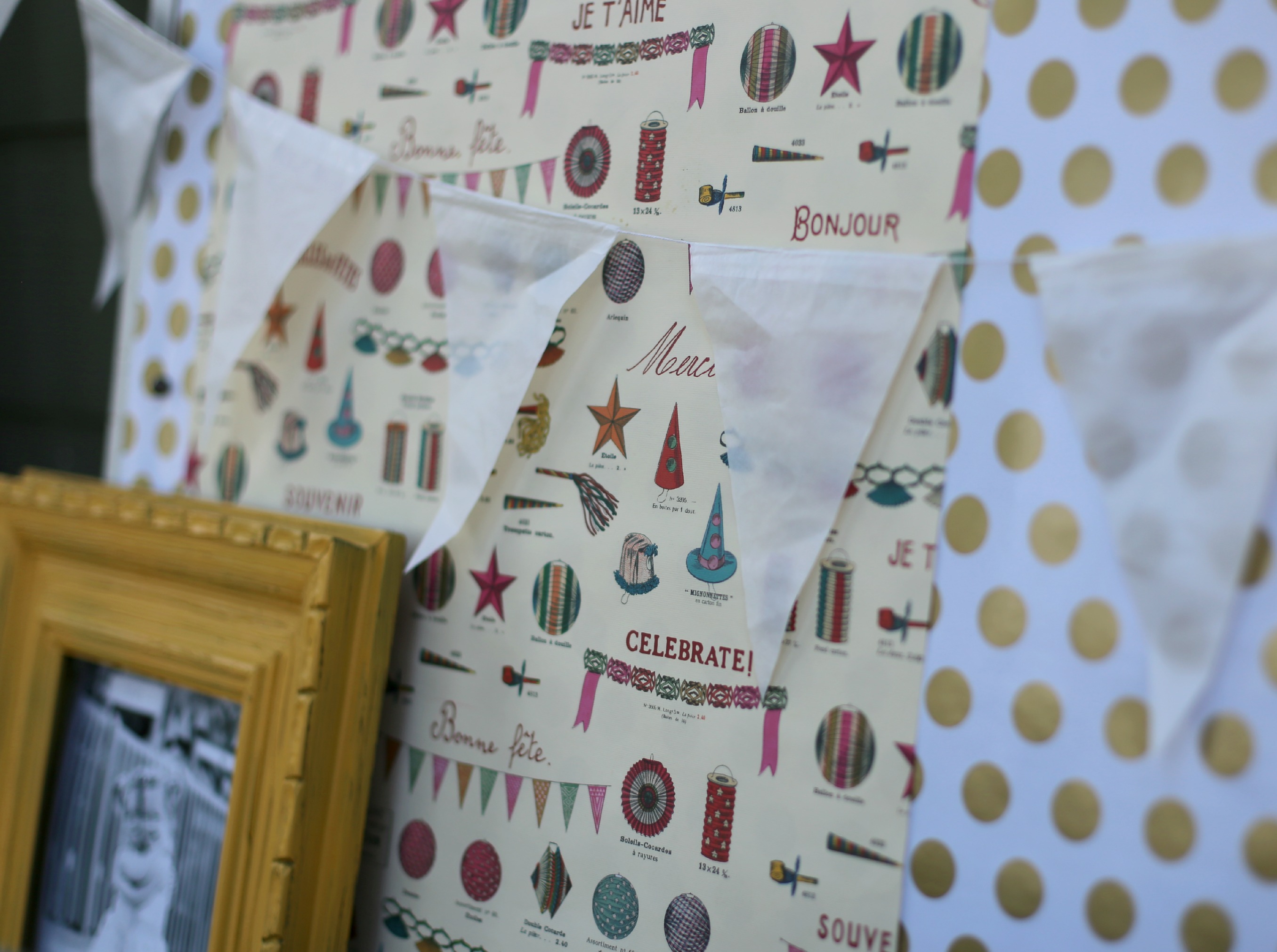 There’s this really cute shop in Riverside, CA called Mrs. Tiggywinkle’s that I’ve stopped into every time I’ve been there with Shaun, and they have an awesome collection of decorative papers. I always come home with at least one, and this time it was that “celebrate” party-themed one in the background. Ultimately, I think it would be fun framed for a little girls’ bedroom, but for now, it made for great impromptu party decor. 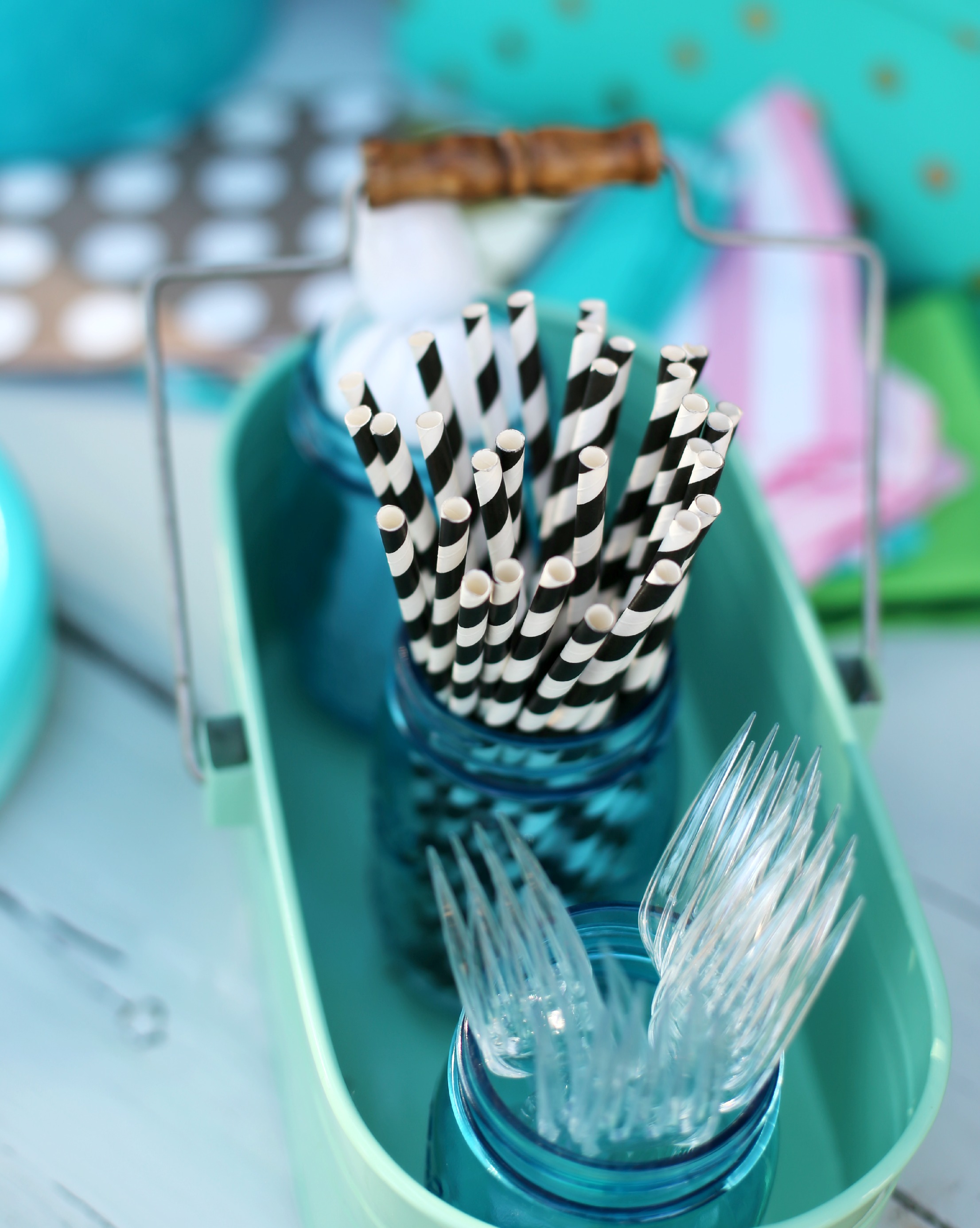 And it wouldn’t be a party (as far as I’m concerned) without patterned straws and napkins. I pretty much have a stash leftover from all past parties, and I just pull out a handful and stuff them in a mason jar for some instant/functional cuteness. 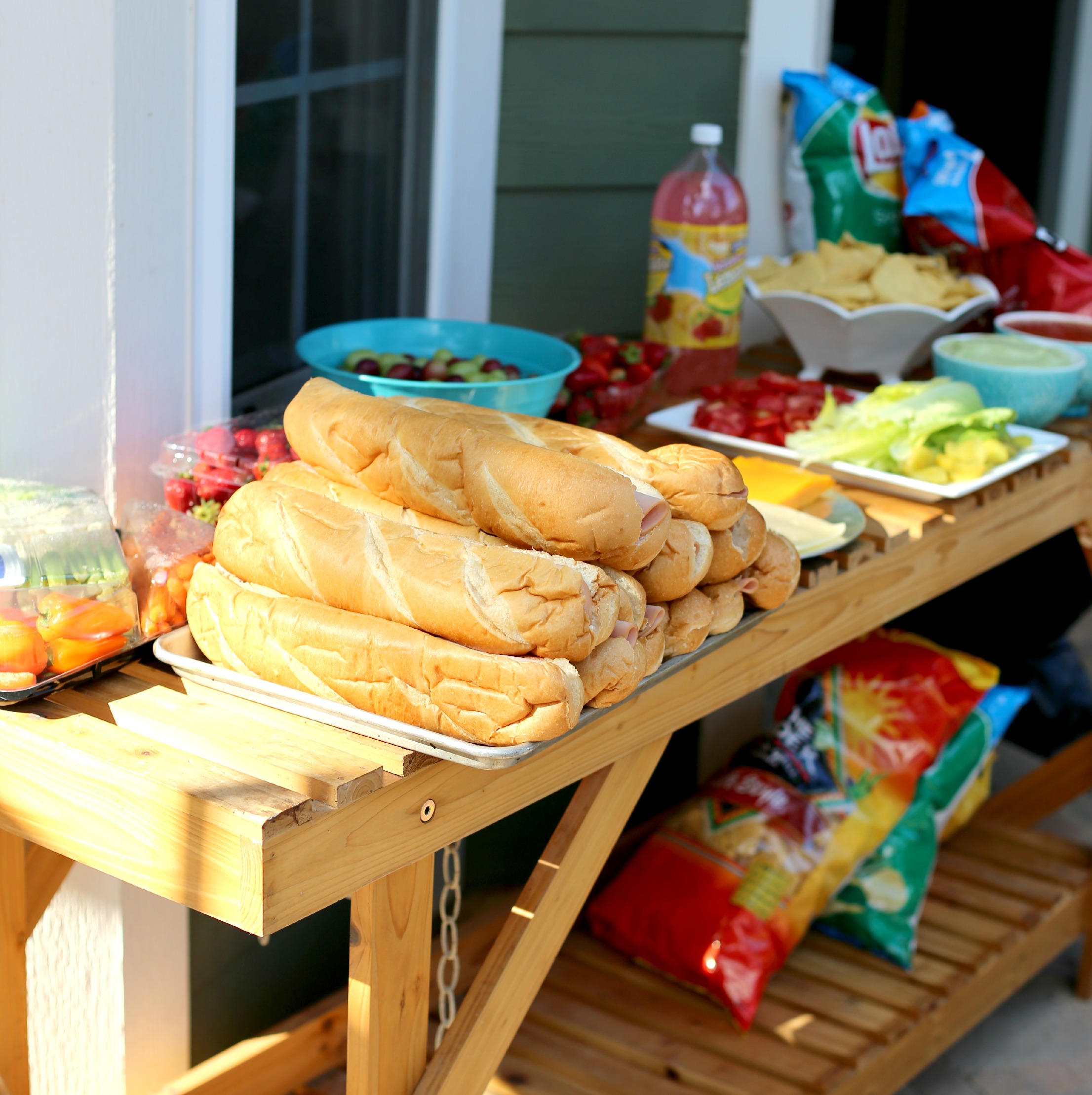 Oh, and just in case you thought that all we ate was sugar…nope. There was a subway sandwich bar too. I highly recommend this idea! I buy my bread/cheese/meat in bulk from Sam’s, then throw the meat/cheese on at the last second and set everything out with a huge platter of veggies, condiments, chips, and drinks. Et Voila! Dinner for a crowd in no time flat. And so much cheaper than ordering from a sandwich shop that there’s really no comparison.

Oh, and just so I don’t leave you with an image of a heap of sandwiches. 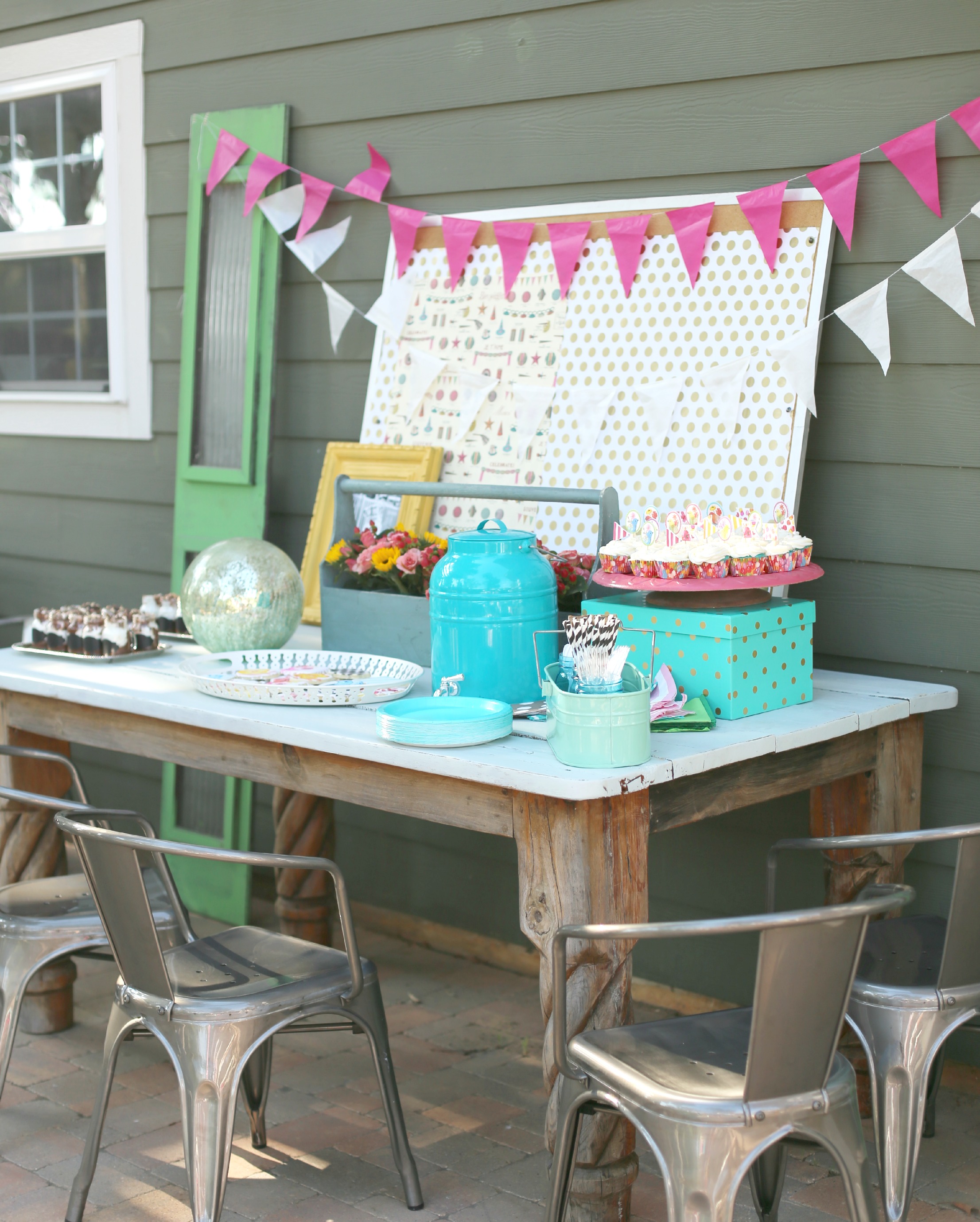 We had so much fun celebrating the twins and hanging out with friends and family. Sometimes, I feel a little bad that the twins are the ones who most consistently get a birthday party because it just so happens to fall at a convenient time, but when I see all of my other kids chasing their friends through the yard and squealing in delight over getting to share cupcakes with cousins they don’t get to see as often as they’d like, it’s a good reminder that, while they may not be the ones getting the presents (as if they really need anything more), but they’re still having a ball.

And that’s a wrap! Stay tuned for Friday. I’ve got a killer #mamalifehacks tip that you’re going to love. Or at least find marginally useful. I hope.