Shaun always says that the best part of building a house is framing. And I’m inclined to agree, even though I didn’t put one single nail into one single board either of the times that we’ve framed a house for ourselves. It’s just such a relatively fast process, and the progress is so measurable and exciting. Look! A whole house where, mere weeks before, there was nothing but dirt! We’ll be done in no time! We’re invincible!

And then, of course, everything slows to bit of a crawl as the more tedious, detail work begins. Which…is pretty much where we are now.

Although, speaking of framing…we did manage to get the porch up, and we even got a few windows installed. But more about that in a minute. 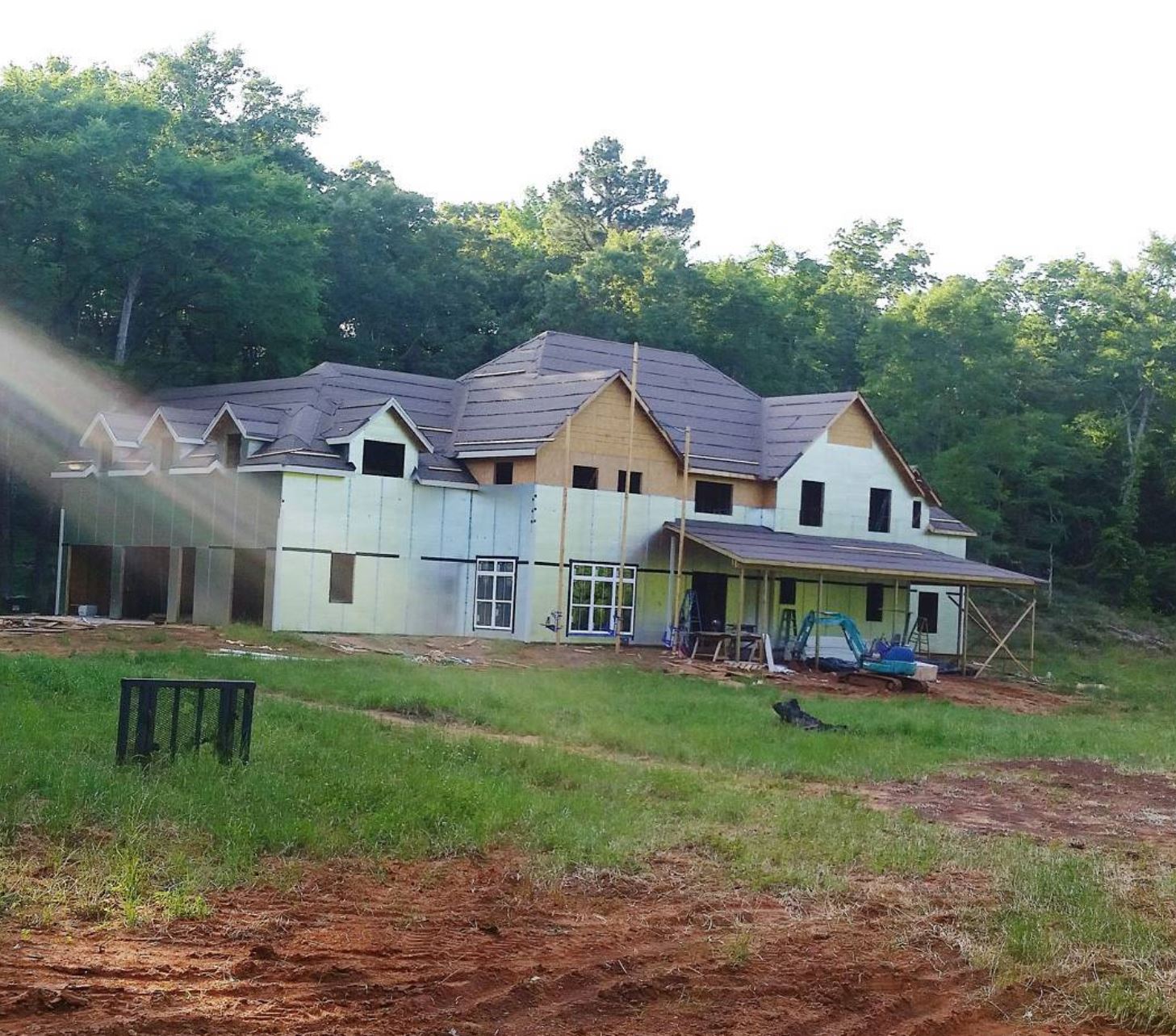 Next up: siding, roofing, finishing the window installs, and the plumbing and electrical. Almost all of which we’ll be doing ourselves. (With the exception of shingling the roof, which is a much faster process for a professional and relatively inexpensive). We had thought to sub out the siding since it’s a pretty daunting one-man (or two-man, when my incredibly awesome father-in-law can help) job, but the quotes we got were laughable. $33,000 for 3 people to hang siding for 4 weeks??? That one was enough to make me think I’d missed my calling in life. I mean, $120,000/year to hold siding up to a wall and nail it in place? Sign. me. up. (Says the girl who taught a foreign language to hordes of wiggly freshman for less than $30,000/YEAR as a 20-year-old).

Hopefully, you don’t think I’m being tacky. It’s just that, after having subbed out the siding on our addition several years ago (Shaun hung the siding on the original portion of our current DIY house himself), we had a pretty good idea of what it should cost, and–the best we can tell–the crews who quoted us jobs took one look at our large house, and, instead of simply extrapolating time/materials/labor accordingly, practically tripled their asking prices (per day).

So! Shaun will be hanging the siding slowly but surely in between working on all of that other stuff I mentioned. Plus working his day job and taking work trips this summer. Plus being a husband and father. (I have mentioned how incredible he is, right?)

In other words, we’ll be lucky to finish this house by summer 2018.

Actually, the plan (and I use that word with great fear and trembling and a heaping dose of yeah-right-itis) is to completely finish enough sections of the new house by the end of the year that we could move in and put our current house up for sale. Because, while living in an in-progress house is not my favorite, the thought of attempting to keep our current house showing-ready while homeschooling six kids is shoot-me-now-because-I’ll-die-anyway worse (dramatic, much?).

So…that’s the plan. Who knows what will actually happen? 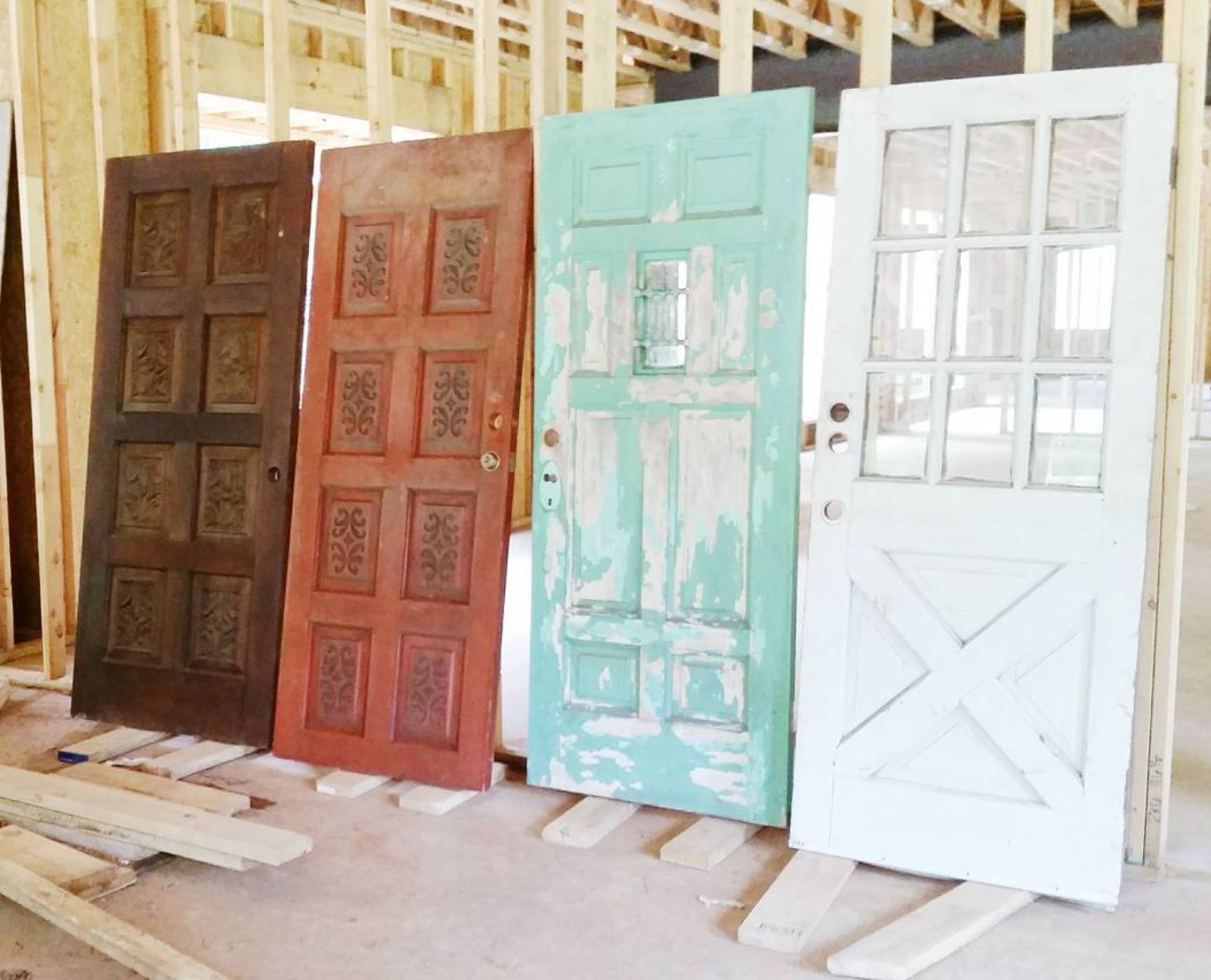 {These are the vintage doors I mentioned the other day; fun, yes?}

In case you’re wondering what this whole process has been like, it’s been mostly smooth. The weather has been (mostly) great. Except for that one time it flash-flooded (worse than we’ve ever seen it), completely washed out the culvert of the new (granted, it’s still dirt) driveway, and left 3 foot deep ruts all down the length of it, with water rising within 30 feet of the actual house.

Of course, fixing a driveway is nothing compared to finding out that your husband has been swept away in the flood, like one woman in our area had to. (I can’t even imagine).

And then, there was the window order for the entire house that was, in a word, wrong. Wrong sizes. Wrong quantities. Wrong grids. Shoo-wee. That was a mess. But, thankfully, the company is acknowledging their mistakes and–slowly–fixing them. We’ll be able to finish installing windows whenever they get that done.

Oh! And then we had a special visitor. 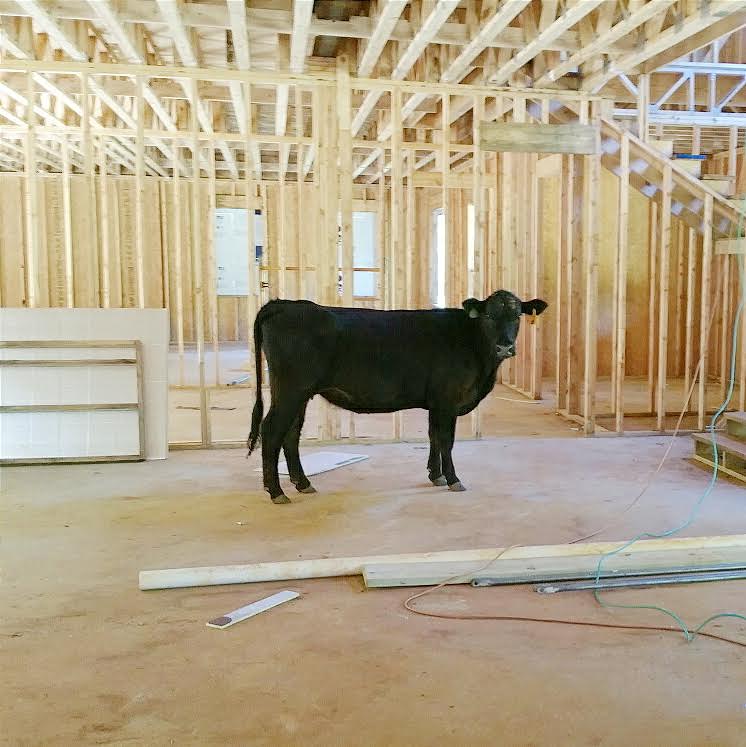 Yup. That would be a cow in our living room. (Thanks to the aforementioned flash flooding knocking down a fence to a neighboring pasture).

Side note: Shaun wanted me to say that we’d be working on this house ’til the cows come home, but, um, I guess they already did.

I’m sure there will be more hiccups along the way, but after my brother fell off of his roof (and badly broke his leg) and then our closest neighbor fell off of a roof and broke his shoulder blade, I’m just so grateful that we haven’t had any accidents (yet). Lord willing, we won’t, but I’m honestly taking this whole process one day at a time and trying not to look too far ahead.

Honestly, the house-building process this time has been considerably less stressful (for me) so far because we live in our home this time. We lived in the second story of my parents’ house the first time, and while it was a wonderful setup, it still wasn’t “our house.” And we felt an urgency to finish and move as quickly as possible. Just the knowledge that, this time, we have no deadlines other than the ones we set for ourselves is a comfort in itself.

So, there you go. Consider yourself completely updated. Unless, of course, you’d like me to discuss in detail which bathtubs I’m considering for each bathroom.