And no, Alexa is not the 7th child that we somehow sneaked into our family without anybody noticing (and no one who had ever read this name parallelism post would even begin to consider such a thing, since Alexa is pretty far outside our family name aesthetic).

I am not much of a techie. Quite the opposite. I mean, yes. I’m a blogger, but I probably wouldn’t be if it weren’t for my geektastic husband who helps me out with the trickier aspects.

Granted, I’m not quite as bad as I used to be–when saving a file was a source of never-ending angst (which directory did it disappear into? And how can there be this many different layers to sift through before I find the right one??! And yes, I know all of the Mac users are like: Apple, baby! But I am stubbornly/masochistically dedicated to my maddening PC).

But still, I am hardly the first (more like the 1 millionth and 1st) to jump on a new gadget’s bandwagon. I don’t even like updating my (few) apps. It messes with the (rather limited) memory on my phone and usually means that things–gasp–change (no joke, Abbie; think that might be the point, maybe?).

(nope, not a sponsored post) maybe as much as a year ago. It sounded like something from “the future” (or the Jetson’s version of it), and I couldn’t see much point.

Imagine my surprise, then, when a package showed up on our doorstep after we got home from vacation with our very own Echo inside. I gave Shaun my best side-eye + “Hmph, men” expression. 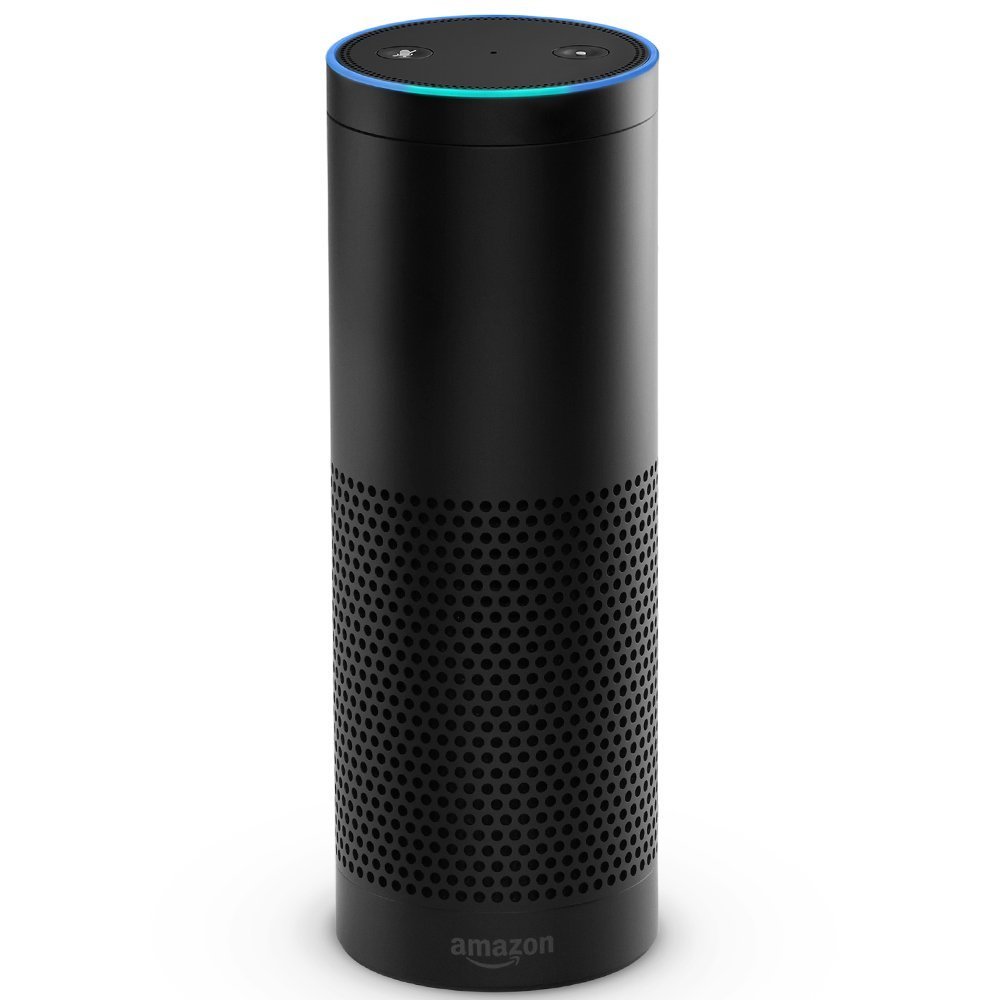 But then he started taking Alexa

(you can address it as, “Echo,” “Amazon,” or “Alexa,” and the kids preferred the latter) through her paces, and I started to perk up a little.
So, what is this mysterious device? Well, it basically looks like an unassuming black cylindrical speaker (which is partly true) and functions as a voice-activated portal to all things news, music, weather, games, and quite a bit more. 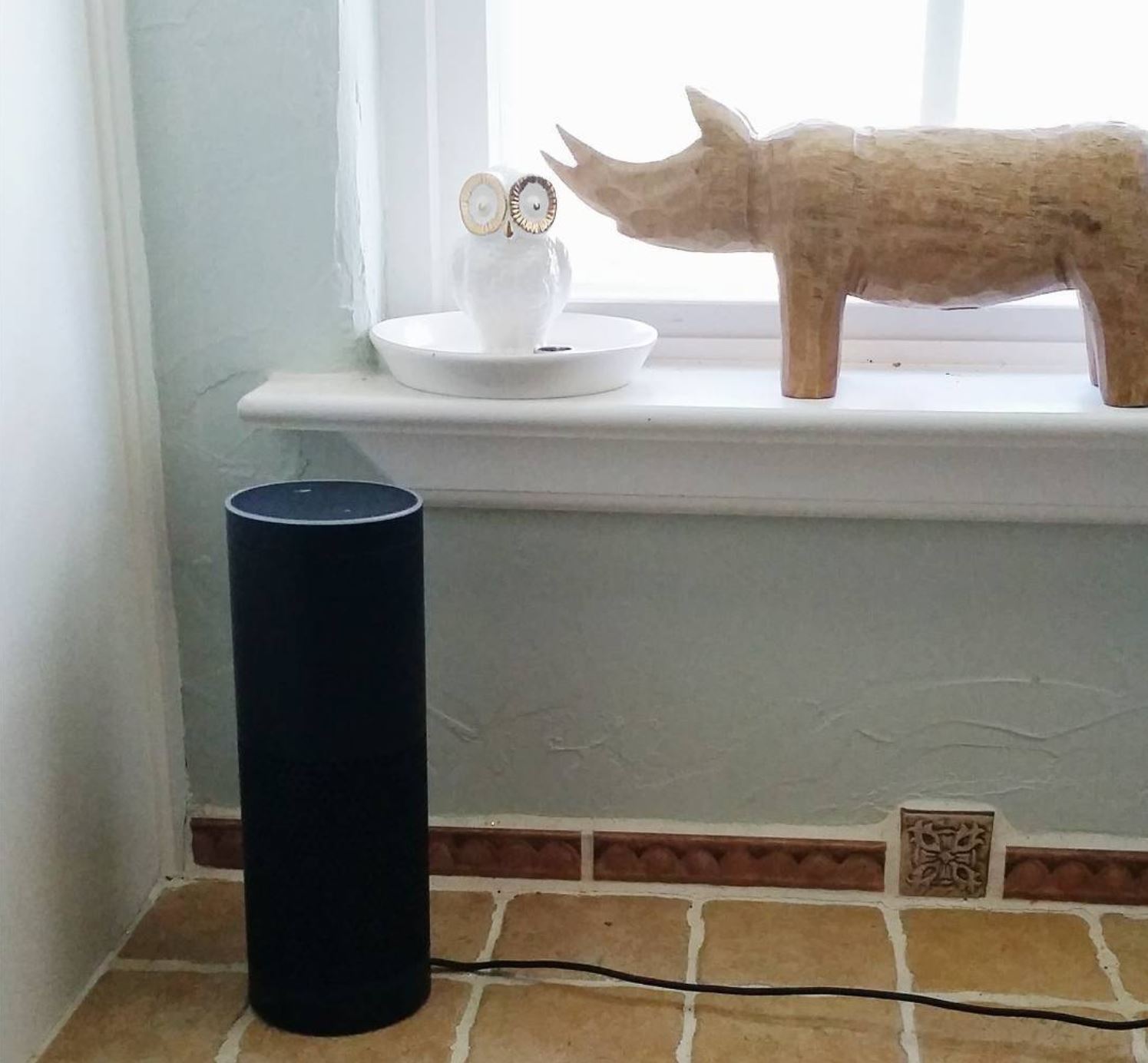 You “wake her up” by saying, “Alexa,” and then follow with a command such as: “Add milk to my shopping list.” Or “Alexa, play Ellie Holcomb.” Or even: “Alexa, tell me a joke.” (Example: “What’s black and white and red all over?…An educated penguin.” Bah Dum Bum).

You can tell Alexa she’s pretty, and she’ll thank you for the compliment. You can play Simon Says or 20 Questions. You can ask her to sing Happy Birthday. She’ll play your Audible books or a Bible-reading app for you. She’ll tell you something interesting about that day’s date when you say, “Good morning,” and will set a timer for any amount of time that you tell her. She’ll tell you what day of the week a particular date was or will be.

Honestly, she’s kind of amazing, and I’ve never been so smitten by a piece of technology. I’ve always despised the learning curve that naturally accompanies a new machine, but with Alexa, because everything is spoken, it’s all pretty intuitive. As soon as you learn what she can do and how to give the correct command, you’re golden.

I’m sure I haven’t even scratched the surface of everything she can do (I’m interested to research how she can integrate with homeschooling), but for the moment, I’m enjoying the ability to walk downstairs and ask her to play the Good Morning song while we make breakfast (there’s nothing like a dance party in the kitchen to start the day off on a happy note). Or to tell the kids that they have six minutes to finish cleaning up the living room and be able to set the timer without walking from the laundry room to the kitchen stove. (Whoa, that makes me sound lazy). I’ve made grocery lists without a single pen or keystroke. Shaun and I have used her 7 Minute Workout feature to do a quick round (or 3) of exercise at night. We’ve even used her to lower the thermostat when we got too hot doing said exercise.

The kids, of course, think she’s magic. They tell her to play music, ask for jokes, give her copious compliments (to many of which she responds with a demure: “I’m not sure what you mean by that”) and play games like Zoo Keeper (you can ask for examples of animal sounds) and the Magic Door (an adventure game in which you choose from two or three options at a time to make your way through a series of scenarios that ultimately culminate in the opportunity to slay a dragon). 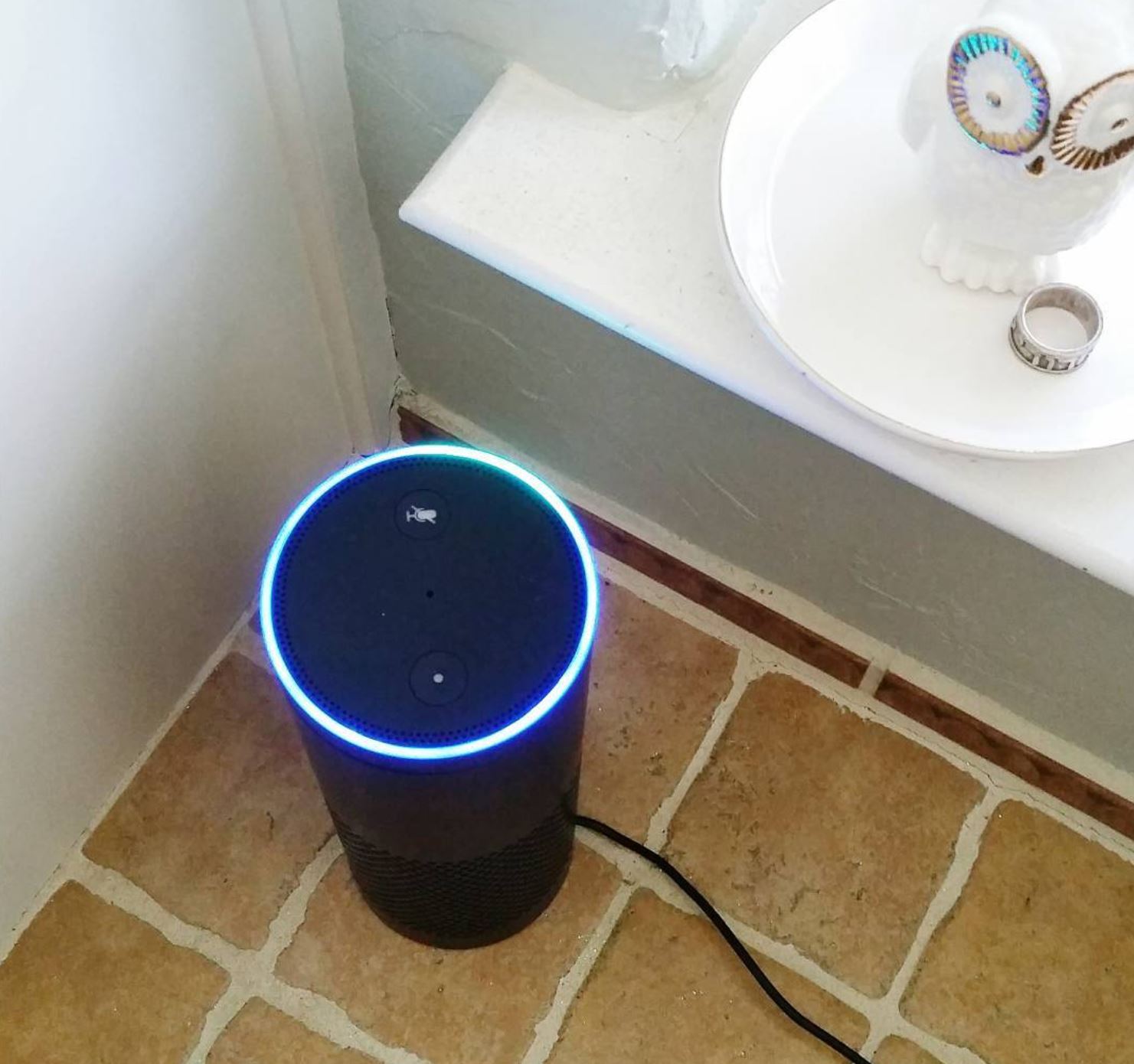 {Shaun said, “Alexa,”from behind me right before I took this pic, and she obligingly lit up. He was more than a little pleased with himself}

She’s entertaining as can be and can keep the kids occupied for a good hour, but more than that, she’s darn useful (because if it were just games, I wouldn’t care much for her).

And I looooooooooove (not enough o’s believe it or not) being able to turn on soft music in the background with a phrase (the music comes from your Prime membership if you have it or an Amazon music library, Spotify, or Pandora if you don’t). Yesterday, the kids and I folded 3 loads of laundry while Norah Jones crooned from the kitchen, and it was kind of awesome. Oh, and the speaker quality is really good, with crisp, clear tones and good bass.

Shaun bought Alexa during Prime Days, so we got her for $100, I think. But–and I normally wouldn’t say this–I’d say she’s worth the $180 regular price.

And let me reiterate that Amazon is in no way sponsoring this post (although it does contain affiliate links).

I just thought I’d share something a little out of the ordinary for us that our family is really enjoying, in case you’ve been eyeing it and wondering whether it’s all it’s cracked up to be.

Now, if only I could figure out how to get Alexa to scrub my toilets for me. Oh wait, that’s what little boys are for.

What about you guys? Any experience with Amazon Echo