I noodled around several different title options before picking one because I didn’t want it to be misleading. This post is not about THEE cheapest way to shop if you have lots of kids. Or about coupon clipping. Or about the best, most filling meals for the least amount of money.

Elements of most of those things are in here, but more than anything, I’m writing this post in response to several questions I’ve received about what the process of feeding a family of 9 looks like.

I do one big haul a week–usually on Saturday mornings. And then, we supplement as needed with a quick stop or two throughout the week. The “big haul” day has rotated through the week throughout the years (we even went together as a family immediately after church for a while there), and historically, I’ve had ALL the kids when I go (many moons ago, when the kids were all smaller and much less helpful, I used to stop on Monday evenings…after teaching two hours of classes at the gym. Because, apparently, I’m a masochist??). Lately, I’ve been heading to town on Saturday mornings for a free Cross Fit community WOD (workout of the day) and then shopping immediately after. NO KIDS. Because the oldest ones are mature enough now to do basic younger sibling maintenance (Honor’s down for a nap) while Shaun does projects around the house.

Are there words to adequately describe the sheer joy of grocery shopping alone? I’m not sure there are. But “bliss” comes to mind. 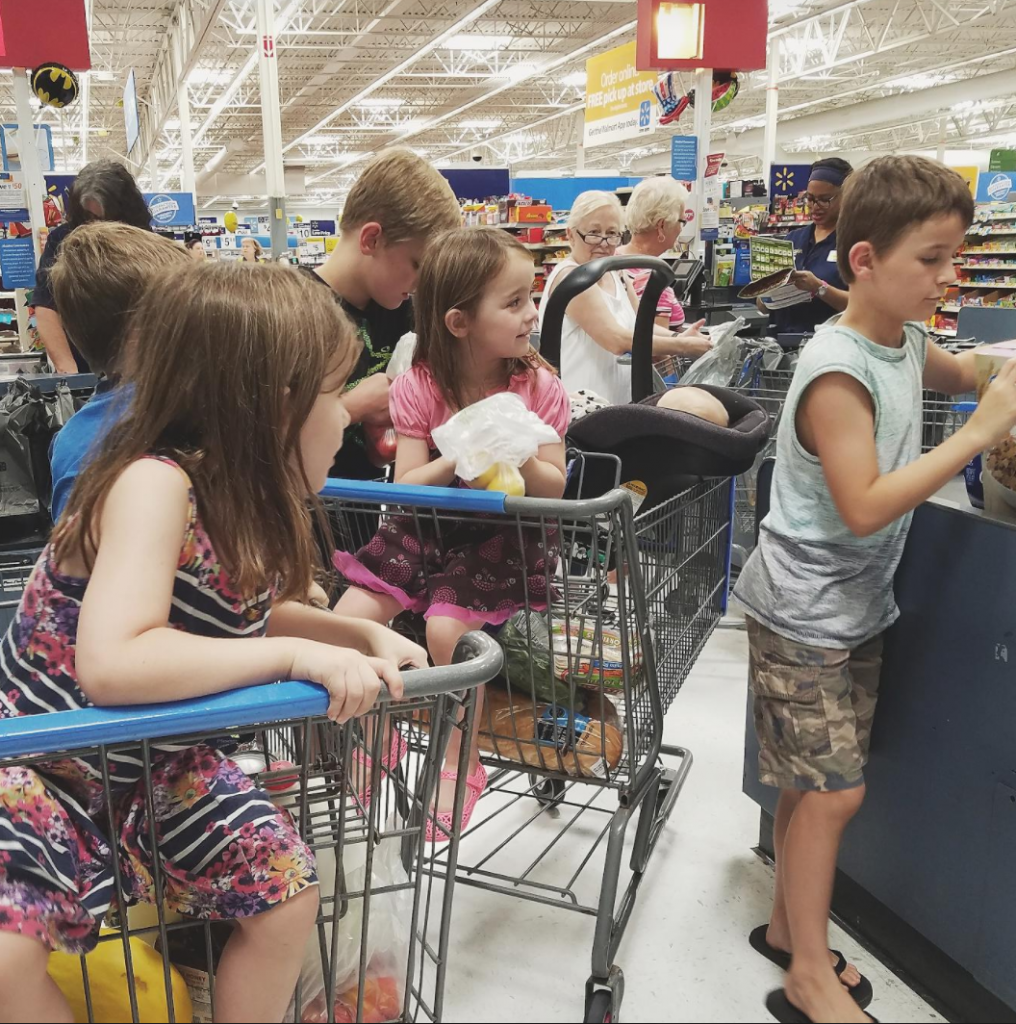 Shaun’s been traveling a fair bit recently, so the kids were with me on a random Tuesday. We always have two baskets and take up a fair bit of space, but they are genuinely helpful (I don’t load the belt or bag groceries) and definitely know the drill after years and years of tagging along. My favorite thing about this picture is that, as I was looking at several that I took from my phone, the lady with the white hair in the back is staring at us with that same bemused expression in every single one. Ha!

This is the one everybody wants to know, right? I mean, we’re feeding 9 people. Surely, we must be spending a fortune. Of course, with 4 (almost FIVE!!!)-year-old twins, a 2-year-old, and a newborn, half of my people don’t actually consume that much in terms of volume yet. But the amount feels like it increases on a weekly basis, which makes me nervous.

Our typical bill for the “big haul,” including some non-food items (so, a package of toilet paper, or a box of diapers) is about $190. Obviously, there are some weeks that all of the extra stuff comes “due,” and the bill is considerably higher.

If we were to stick to that every week, that would be a pretty incredible budget for such a big family. But we always end up stopping at least one more time to grab a rotisserie chicken + fruit + milk, etc. Most weeks, we spend another $50 at least. 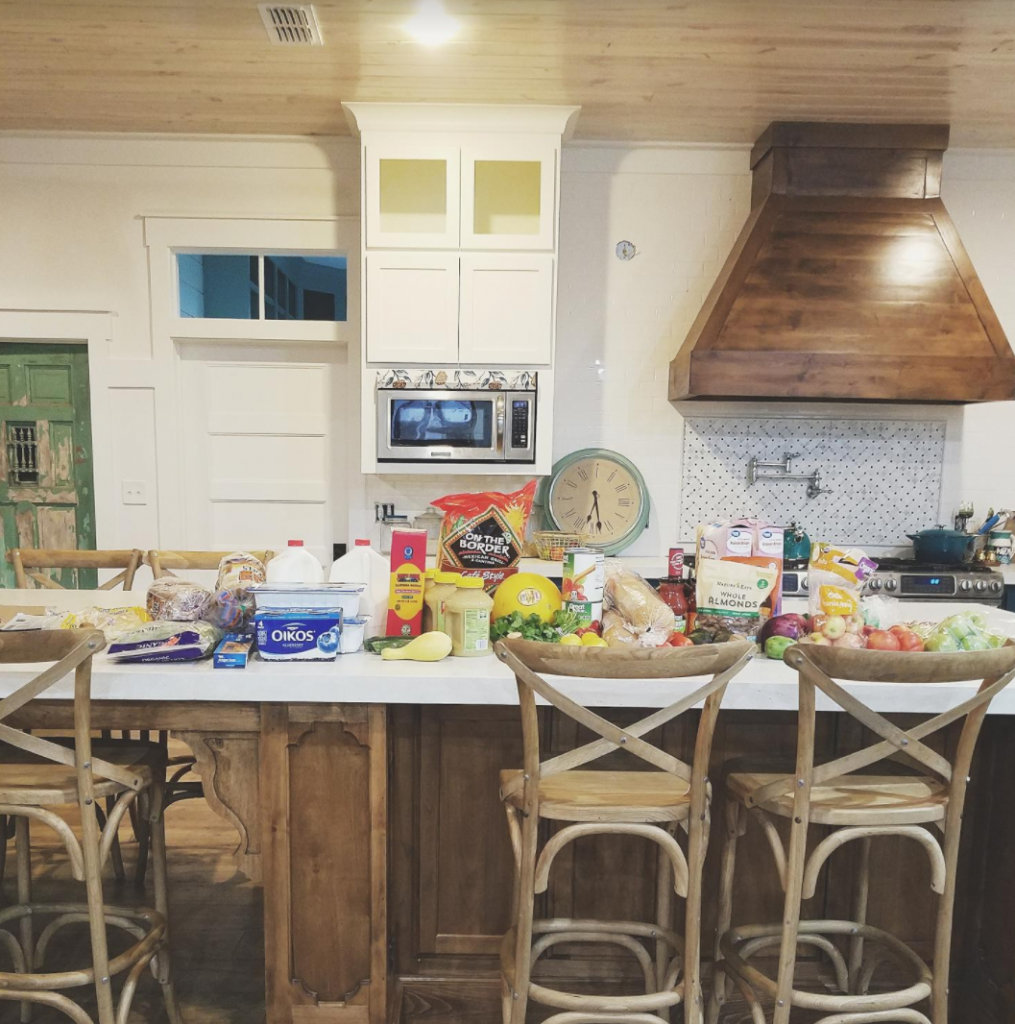 This particular load was about $135. I usually get more of most things (like bagels and yogurt), but we were still stocked on those from a previous trip.

3. What do you eat every week?

I’m sure this is true of most folks, but we eat basically the same thing every week. Cereal, bagels, or eggs for breakfast, yogurt and fruit for snacks, sandwiches or leftovers for lunch, and an ever-repeating rotation of about 20 dinner options that use a lot of the same ingredients.

We don’t do much in the way of prepacked foods, but neither do I make complicated meals.

4. What ingredients are you never without?

You’ll pretty much never find us out of: diced tomatoes, tomato sauce, limes, cilantro, avocados, OTB Corn Chips, cheddar cheese, black beans, onions, tortillas, raw chicken, and raw ground turkey (obviously those last two get cooked quickly, usually in batches for the entire week).  We are a Tex-Mex family, apparently, and I make homemade salsa (it takes 5 minutes and is SOOOO good) and guacamole on the daily. If I’m in a pinch for dinner, we’ll probably be eating burritos and black bean salsa or spaghetti that night. 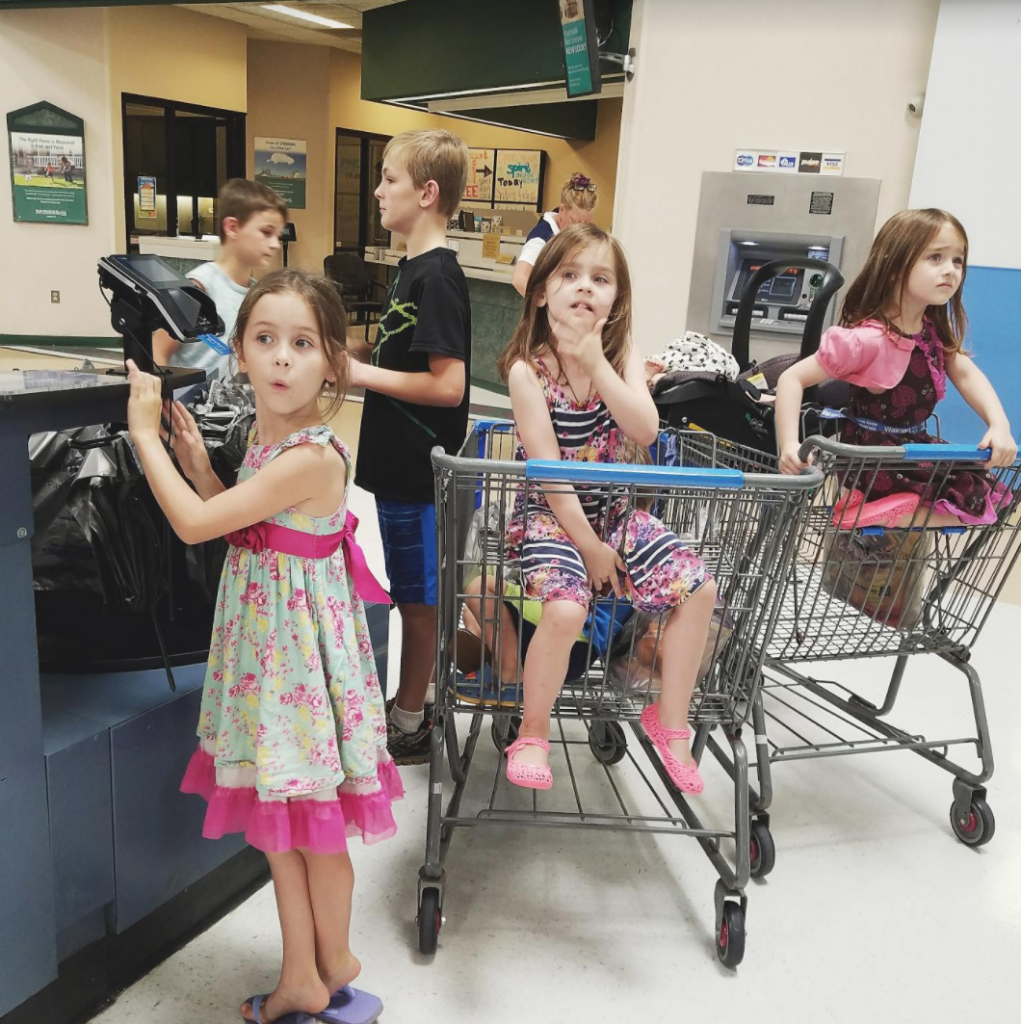 Bonus points if you can a) spot Theo or b) figure out why Nola looks so distressed (probably, she just heard that we weren’t having “her favorite spaghetti” for dinner that night).

In the past, not very much. We still don’t do tons, but we’re a little “looser” than before. Shaun and I have a “date night at home” every Thursday night when my mom has Ezra, Simon, and Della at her house. We get the four littles in bed by 7:30 and settle down on the couch with takeout Thai food to watch an episode of Fixer Upper or Vera (British crime show).

Once a week (usually on Fridays after I teach Combat or a Tuesday night if Shaun’s out of town), the kids and I will have lunch or dinner at Chick-fil-a. And we usually eat out lunch on Sundays. Plus, we go pick up the big kids from my mom every Friday night, and she fixes dinner for us + my brother’s family. So, I typically cook (or at least prep some kind of food) 5 nights a week, with Thursdays and Fridays off.  If I moan even a little bit about cooking on Sundays, Shaun orders pizza. 🙂

I used to religiously scout out the sales in the local ad papers and then take them to Walmart for price matching. My mom just told me that Walmart isn’t honoring competitor ads anymore, but I haven’t done this for a couple of years anyway. I did save a fair bit sometimes, but I also found that–outside of a $0.99/lb sale on grapes or some other produce–most of the things we buy regularly at Walmart were pretty comparable to the sales I usually saw.

We also used to shop at Sam’s Club, but we’ve been in such a busy season of life for so long that the extra effort of driving out there (it’s a ways from our house) and spending at least an hour grocery shopping–usually on a Sunday–just wasn’t worth it to us. We may renew our membership in the future, but for now, we’re keeping it simple.

As to coupons, I just don’t. I know I could save a lot of money, and, of course, I use the ones they include on the yogurt packages, etc., but I don’t actively buy items based on whether they have coupons available.

I think my best way to keep our food bill decent is to buy inexpensive, simple food and do a fair bit of cooking. Cheaper AND better for you!

So, there you have it, folks! What grocery shopping for 9 looks like around here. I know this will continue to evolve as the kids get older/eat more. I’m seeing lots more beans (and flatulence…) in our future.

What does grocery shopping look like at YOUR house?

0 thoughts on “Grocery Shopping for Our Large Family”