Because you haven’t seen just tons of it yet here on the blog, and it has definitely “blossomed,” as one of my fellow fitness teachers put it, a few weeks back.

Or, to quote another gym member, “Wow, Abbie, you went from ‘Is she pregnant’ to 9 months in like a week!”

But at 25-weeks-pregnant with twins, I suppose I’d best be showing a bit since those baby girls need to be growing healthy and strong.

Right? Of course, right (props if you can tell me who says this line in which movie).

Last week, I mentioned that our anniversary weekend trip to Chicago was a blast right before I launched into Our Love Story, and then I didn’t say anything else about it.

But I did wear clothes while there (huge sigh of relief, I know), so I thought for Wardrobe Wednesday we’d head back to ol’ Chi-Town for a fashion recap. 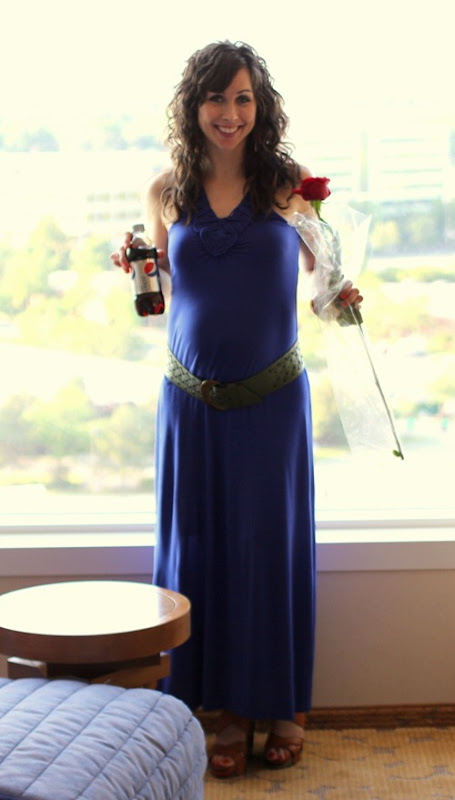 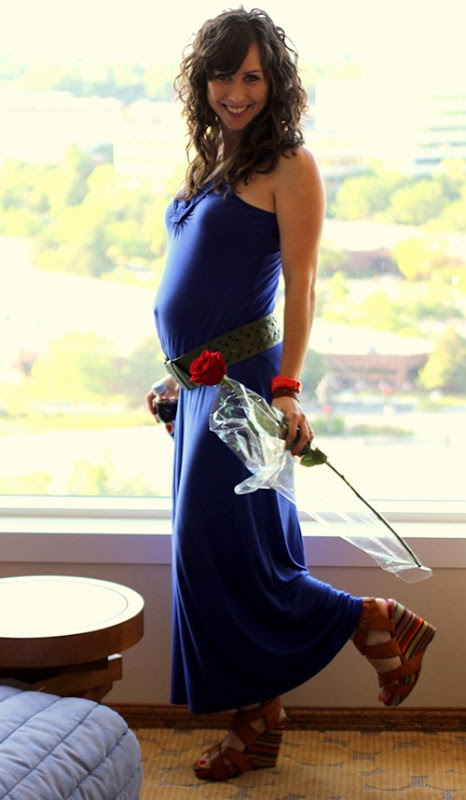 I wore that royal blue maxi ($13 from Ross and one of the contenders for the Dinner Party Dress) and those decidedly UN-airport-security-friendly wedges on the plane ride there, where Shaun met me with a pretty red rose and one of my favorite drinks.

And then I changed into something a bit more suited for a fun anniversary dinner later on that night. 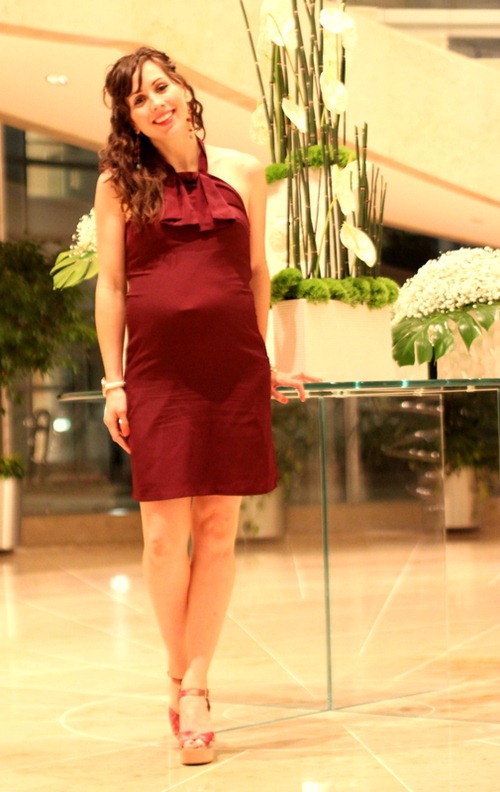 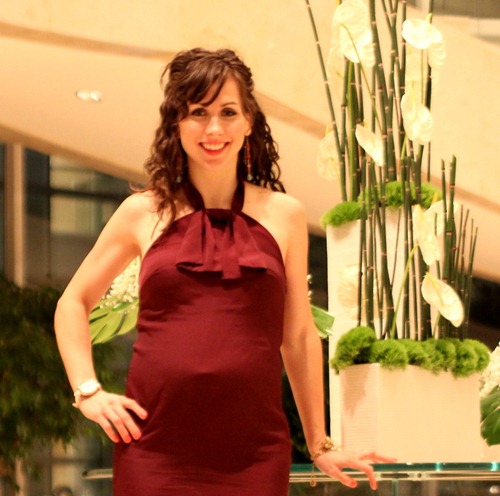 The dress was a $7 Target clearance rack steal from a few years back that I had never worn, and the shoes, which, with their watercolor print and nude heels, are definitely not my usual cup of tea, were a Dillard’s 65%-off buy right before the trip.

At $35, I wasn’t completely sure about them, but they were surprisingly comfortable considering their height, and I ended up really liking their dressier-than-usual-for-me vibe.

PLUS, by the time I got back from my trip, the whole 3-days-to-return-your-65%-off-clearance-items business that I’d forgotten all about had already expired.

So, into my closet they go, and I will be finding more stuff to wear them with! 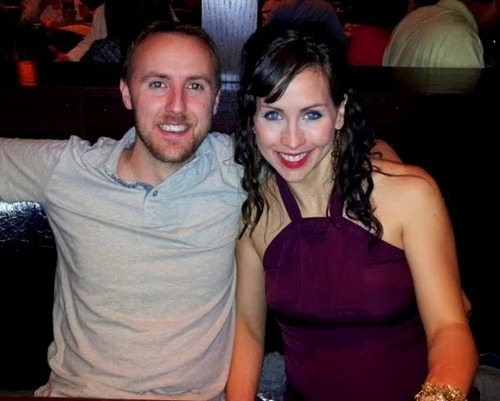 I’ll talk more about the food tomorrow, but let me just say that if you ever get the chance to go to a restaurant called Wildfire (it’s a chain but has a very limited area in which it can be found), do it.

Even if you’re not a steak person (I’m not).

Every last thing we ate there was crazy good. 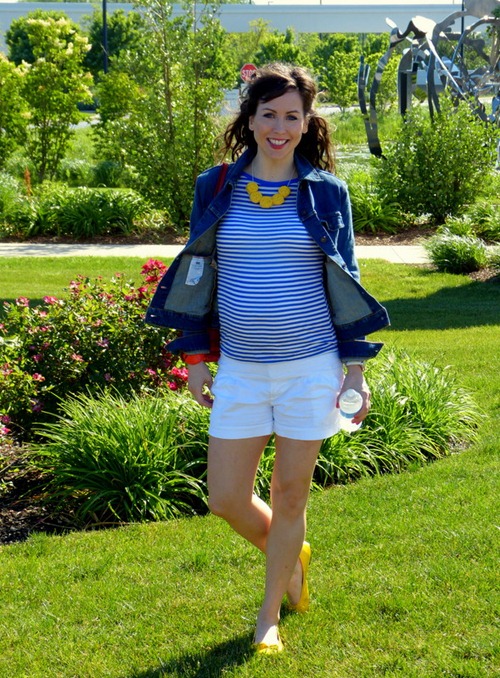 You can’t really see it in this pic, but my purse was red, which means that, with the green, green grass, I had practically every single one of the primary colors covered with this outfit, which was a mix of Goodwill (flats—that rubbed a hole in my right heel—and white shorts originally from Delia*s), Old Navy clearance (striped top for maybe $4), and cute rolled flower necklace from Vintage Wanna Bee. I’ll talk about that jeans jacket more here in a minute. 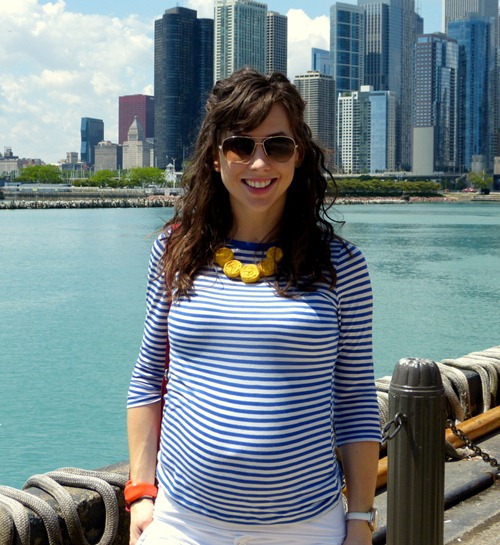 A shot from Navy Pier. I don’t know what color it will be on your screen, but the water in the bay was sooooooo blue—teal, really—that Shaun and I kept joking about how we were surprised any fish were still alive and swimming after how much dye they must’ve dumped in the water to get it that color. 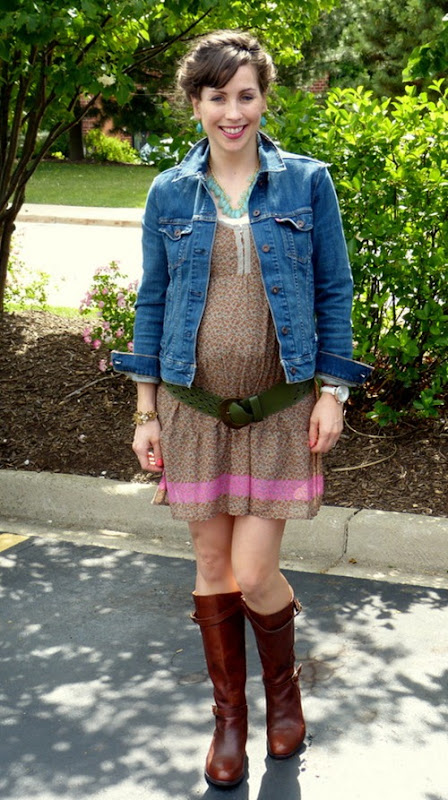 I didn’t wear that belt until right before we took the picture (when I had a sudden fit of, “This is too drab!”), and now I’m glad that I went without it, since it makes the skirt of my Target dress (a $25 splurge which is going back because it’s already starting to fall apart) too short.

And then there’s that denim jacket that I said I’d bring up again.

You guys know I’m thrifty when it comes to most things and above all clothes.

But I do tend to spend a little more when a) I have a specific event/idea for which I’m buying and b) I’m pregnant.

After all, there are only so many Goodwill shirts you can find that will actually cover the whole bump, and slivers of pregnant belly skin sticking out from under your shirt are just not cool. Ever.

So, I actually paid $50 for that jeans jacket at Macy’s because a) I liked it well enough (even though it wasn’t the wash I was looking for), b) it fit really well, c) I hadn’t packed a jacket and realized it only when I was already in town ready to head to the airport, d) apparently it is not jeans jacket buying season, so my options were ridiculously limited, and e) I figured if I wore it briefly, took a picture or two and realized I hated it, I could always take it back.

I ended up wearing it throughout the weekend, so returning it wasn’t really an option, but it became an absolute IMPOSSIBILITY when I walked into DFW’s TGI Friday’s and plunked my tired self down in a booth only to discover that my jacket was no longer looped over my camera bag like it had been throughout my entire airport hike.

I immediately ran out of the restaurant and began retracing my steps (I even stopped a complete stranger who walked by carrying an almost identical jacket at a very odd angle—as if to say, “This isn’t mine…I’m just delivering it to lost and found”—to ask if her jacket were, indeed, her own. She confirmed that it was without giving me too big of a, “Step off, crazy pregnant lady” look).

I finally concluded that it had slipped out of the camera bag loop while I rode the Sky Link between gates and that I could either spend the rest of my layover waiting for trains to come in and checking each one or actually eat some dinner.

I thought about doing the former, but then the twins said, “Mama, feed us now or we’re going to do BODYCOMBAT on top of your innards until you do!” and I caved.

I actually posted about this on our FB page, and one of my sweet readers said that she liked to think of instances like this as God’s way of telling her that somebody else needed whatever she’d lost more than she did.

Maybe just because it makes my carelessness seem somehow holy.

Mostly, though, I admire the positive, generous spin it puts on a frustrating situation.

But here’s the kicker.

The $50 jacket is gone, but once I get an idea in my head, it’s hard to get out, so I immediately started trolling Ebay for a replacement option and came up with the following: 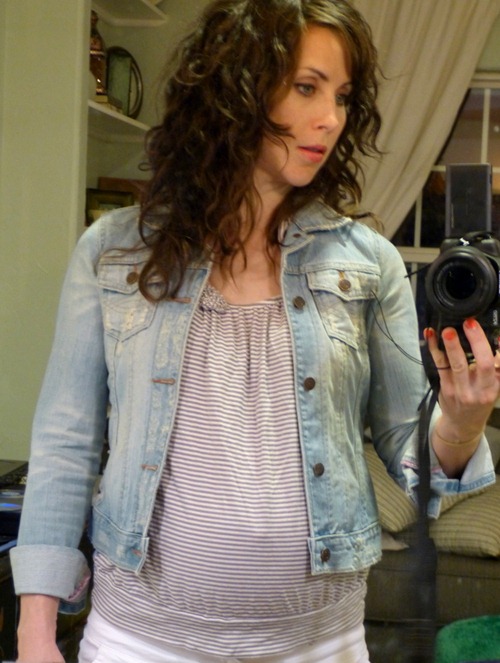 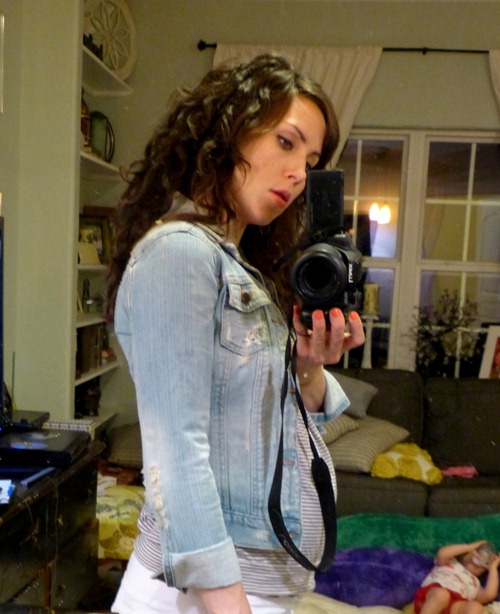 (Ignore all the pillows and the lounging toddler if you can. We were having a movie night on the floor). 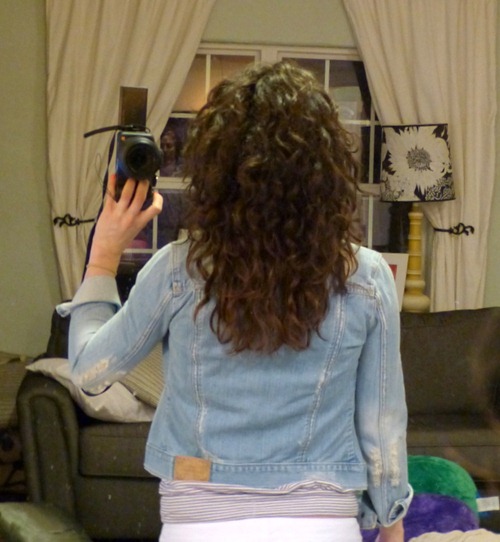 It’s cute…great quality…and I love the wash along with the distressing and fraying, etc.

The Ebay seller provided measurements, which I then applied to the best of my ability to my own body, but it’s still a bit on the smallish side, especially in the shoulder area (I don’t mind the shorter length).

And it’s 100% cotton, which means no built-in stretchiness.

But cotton does tend to stretch a bit after wear, and I’ve already noticed after wandering around the house in it for half an hour or so that a good bit of the stiffness has mellowed out.

Still, my question is: do I keep it?

Does it look too small?

I specifically plan to wear it over sleeveless maxi dresses and the like while I’m pregnant (assuming I actually end up in any possible location where wearing a jacket instead of just the sleeveless dress will not result in immediate heatstroke).

And once I’ve had the babies, I’ll (hopefully) be losing some of the weight in my arms and DEFINITELY in my belly (or should I just say hopefully again? This twins business is all new to me).

I’m pretty much a fan, but if it looks like I should start singing “fat pregnant woman in a little coat” or you think that post-baby weight loss won’t help the tightness, please let me know because I don’t want my love of the style to skew my judgment.

As always, I treasure your input.

That (needy, pregnant) girl who always wants to know what you think about her clothes