Well, to say that I’m a bit off the pace for finishing my (admittedly ambitious) Project Elephant list from last week in time for this weekend’s party for the twins’ birthday is a weeeee bit of an understatement.

But it hasn’t been for lack of trying.

I blame all of these small human that live with me. If only they would stop making extravagant demands for things like food and water and diaper changes, I would be free to cross things off my list at will.

I guess that’s what I get for birthing 6 adorable, fun, maddening, needy, awesome children.

Anyhoo, I have been plugging along steadily when I’m able and have found that–just like my desire for productivity comes in waves throughout the year–so my actual productivity waxes and wanes from day to day.

Monday? AH-mazing! If I could manage to do what I did Monday–homeschool, cook, clean, project, read to my girls, feed/play with a baby, exercise–all with a minimum of fussiness and fighting and a maximum of energy, I would probably opt to play that day on repeat–Groundhog Day style–just to experience again and again the feeling of my head hitting the pillow that night with a thwump of satisfaction and accomplishment.

But then, there was yesterday, which felt like jogging through quicksand. As soon as I got everybody fed, another round of “HUNGRY!” cries began. Which meant another round of cleaning afterward. I hauled almost everything out of the craft room, but that just means that our big room, which started the day clean, now looks like Hobby Lobby’s fabric department got in a cat fight with their scrap-booking aisle.

And there were entire hours fraught with fussy meltdowns over scenarios such as: toddler asks for juice, mother hands her juice, toddler proceeds to wail as if mother has served her a scorpion with a side of razor blades.

I literally got into bed last night thinking: “Well, I hardly sat down, but I’m not sure what I accomplished or where the hours went.”

ANYhoo, as I comfort myself with the (quite possibly faulty) reassurance that, “It gets worse before it gets better,” I thought I’d show one thing I did manage to check off the list.

And that would be this recovering this sad little ottoman. 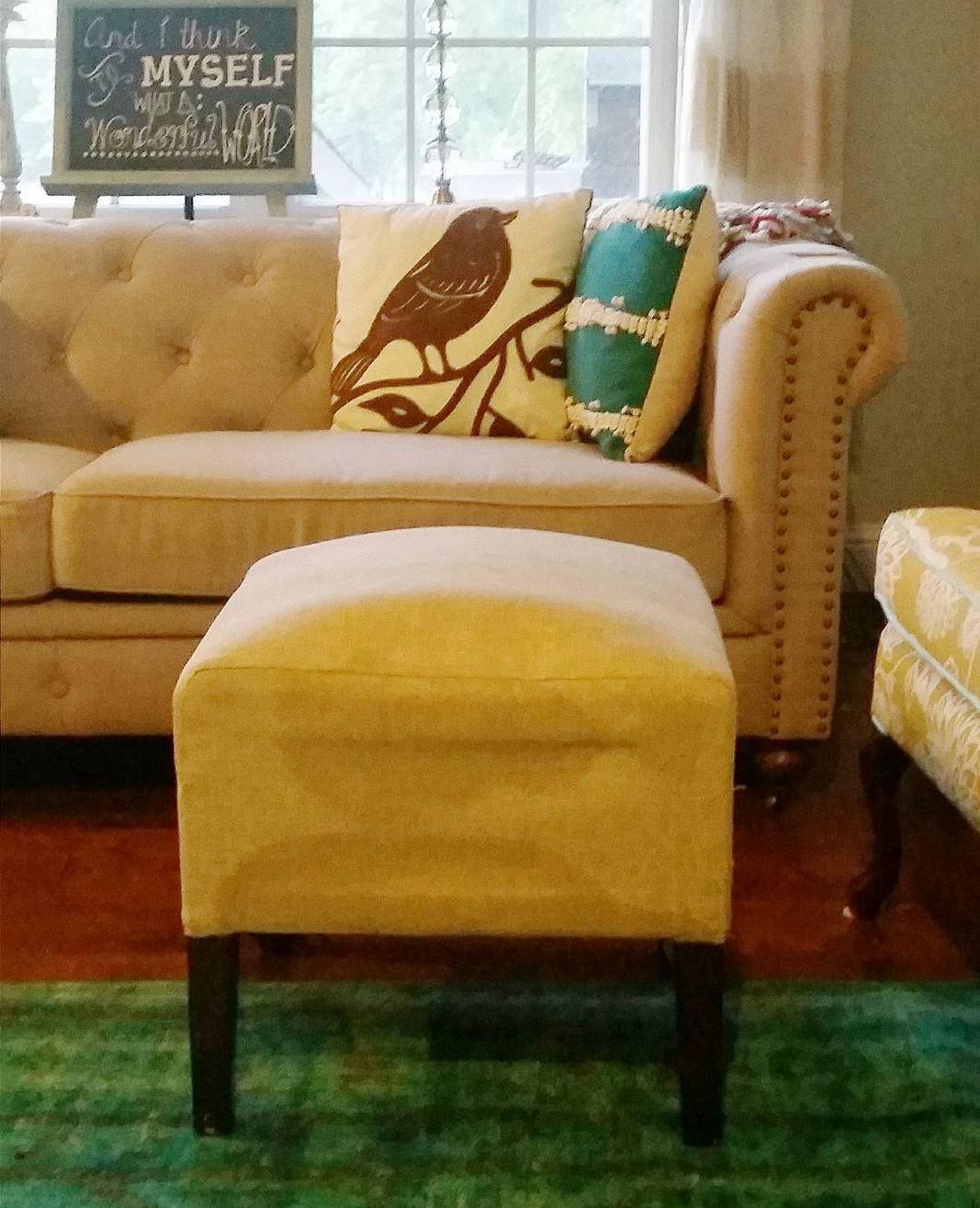 {Pardon the ugly yellow pic; I completely forgot to take a before pic when I had light}

I think I bought it at Ross for something like $30 4ish years ago. Clearly, it has been well-loved by my kids. And their apple juice.

I’ve been meaning to make a slipcover for it for aaaaaages, but it just never was a priority until I finally plunked it on my Project Elephant list (there’s the beauty of PE for you).

Do you remember my lampshade recovers from a little while ago? Well, I had juuuuuuuuust enough of that gorgeous Waverly Santa Maria fabric left (seriously, it was sufficient by maaaaaybe an 1/8″) to make my slipcover, so, using a modified version of this super-simple tutorial, I whipped up this cover, which took it from sad, stained, and lumpy to this: 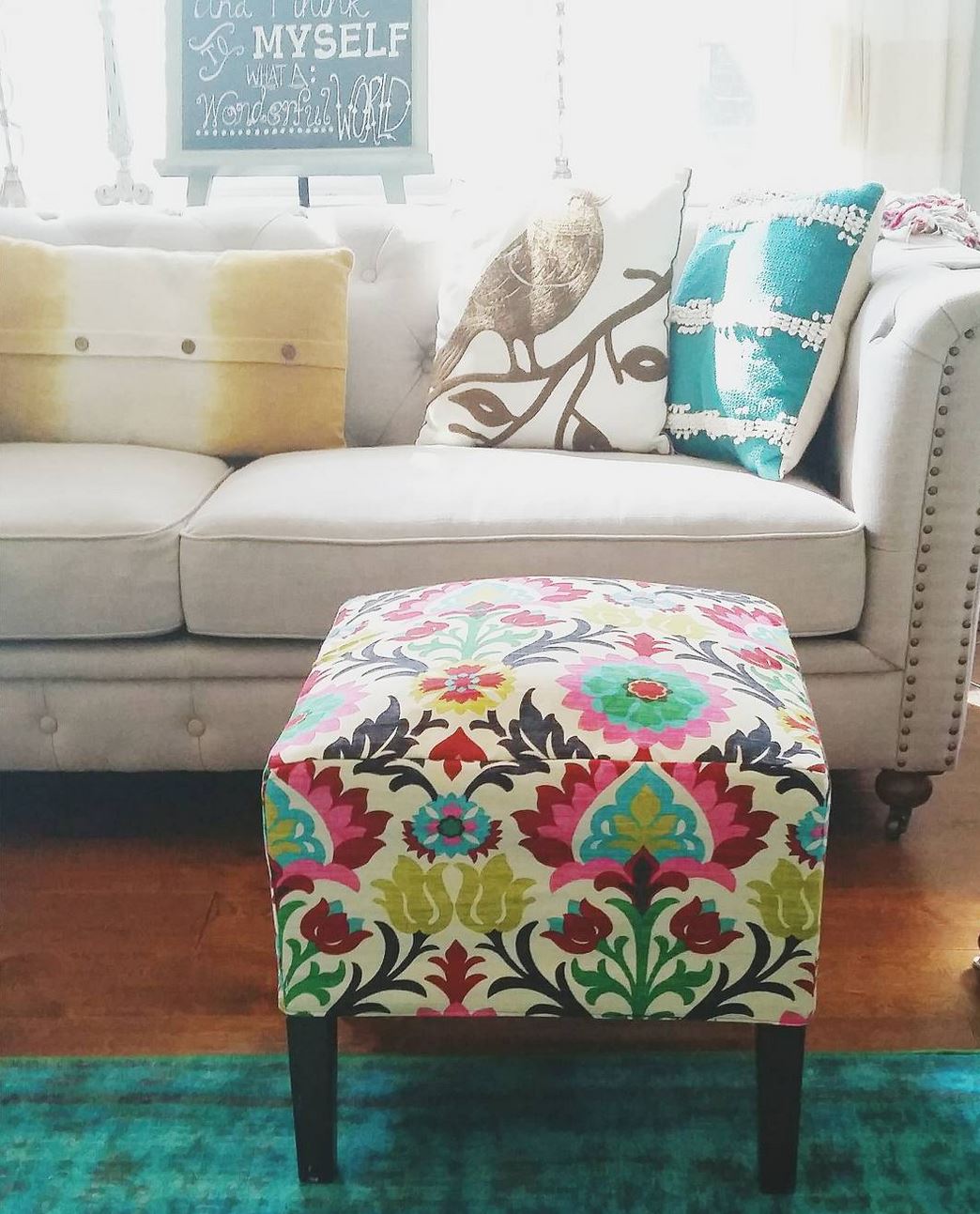 I’m not usually into matchy-matchy fabrics in living spaces, but I like that I can move the ottoman around the room so that it plays more or less off of the mirroring pattern in the lampshades.

And now I’m off to attempt to stuff all of my craft supplies in a somewhat organized manner back into the craft room (which, considering that it was piled practically to the ceiling and is clearly insufficient for the amount of stuff I have, could be…interesting).

Happy Hump Day, y’all! If you have any trouble chomping through your elephants today, I suggest eating an appropriately shaped animal cracker. You’ll feel accomplished immediately. Or at least, less hungry.