Can you tell I was on spring break last week?

Technically, of course, it was just for the kids. I had no intention of changing much for my own schedule. But…given the fact that you haven’t heard from me in a week and a half, I’m guessing you can tell how that worked out for me.

So, I thought I’d take a moment (i.e. this entire post) to catch y’all up on my oh-so-scintillating life. It occurs to me that I don’t do a lot of “life” blogging anymore–although, clearly, any material that I post here is the natural overflow of something I’m doing. But still, it seems to me that we might just be a tad overdue for good o’l picture spew post.

We have a brand new Paint and Prose print in the shop, just in time for Easter. 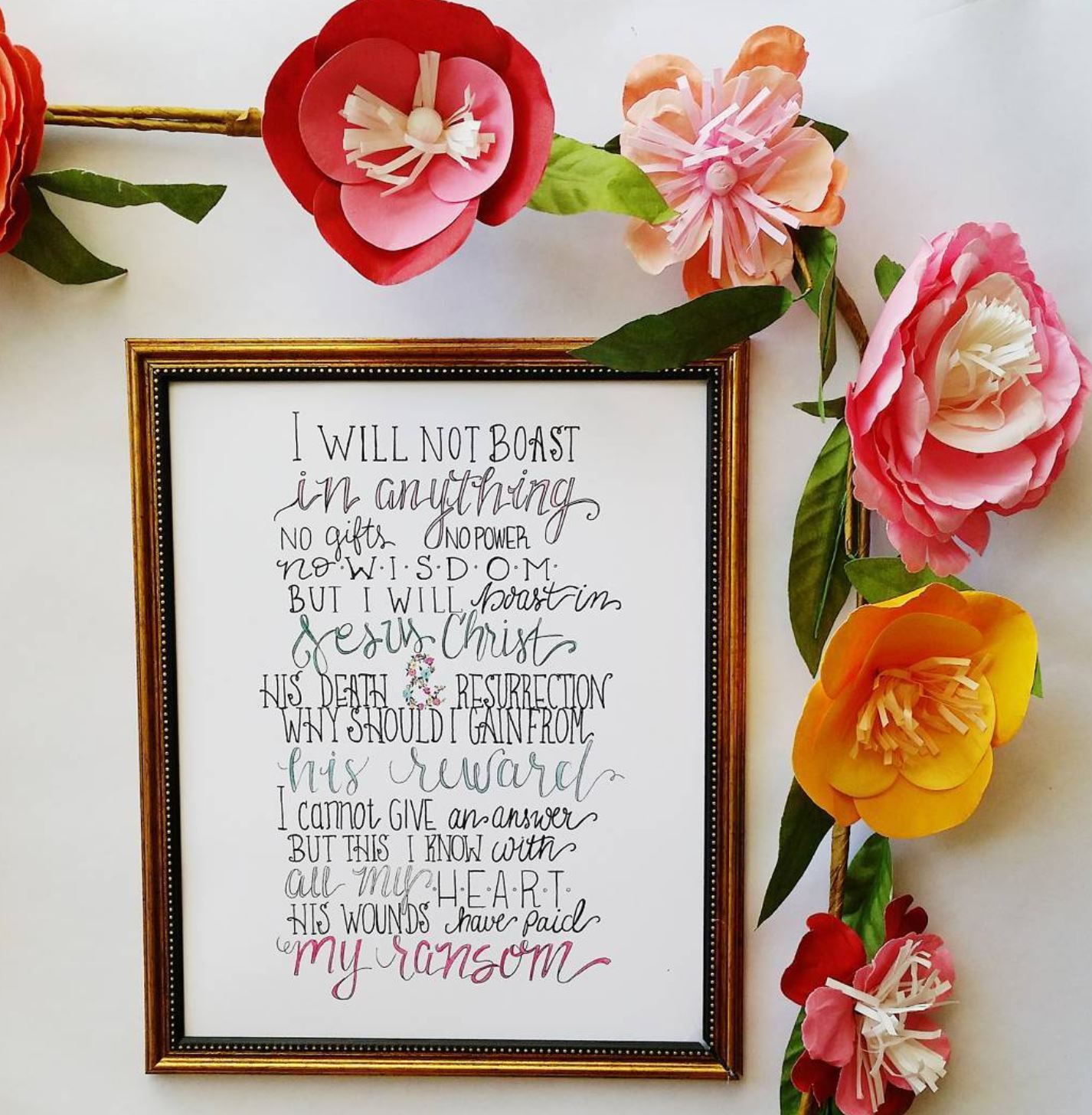 “How Deep the Father’s Love for Us” is one of my all-time favorite hymns. The tune is so haunting but the words even more so.

“I will not boast in anything, no gifts, no power, no wisdom. But I will boast in JESUS CHRIST, his death and resurrection. His wounds have paid my ransom.”

Honestly, as much as I love Easter, I need this reminder year round. I also love that we managed to incorporate our signature floral ampersand to give the print a pop of color/whimsy.

I ALSO love that you guys can order any print in an 8X10 or larger, and you’ll get a FREE 5X7 (just be sure to specify which one you want in the notes at checkout). Good through Sunday!

Speaking of Paint and Prose, spring break week started off with a trip to Austin for the Happy Hour Live with Jamie Ivey. We donated Paint and Prose prints for the goody bags and thought it might be fun to be there in person too. 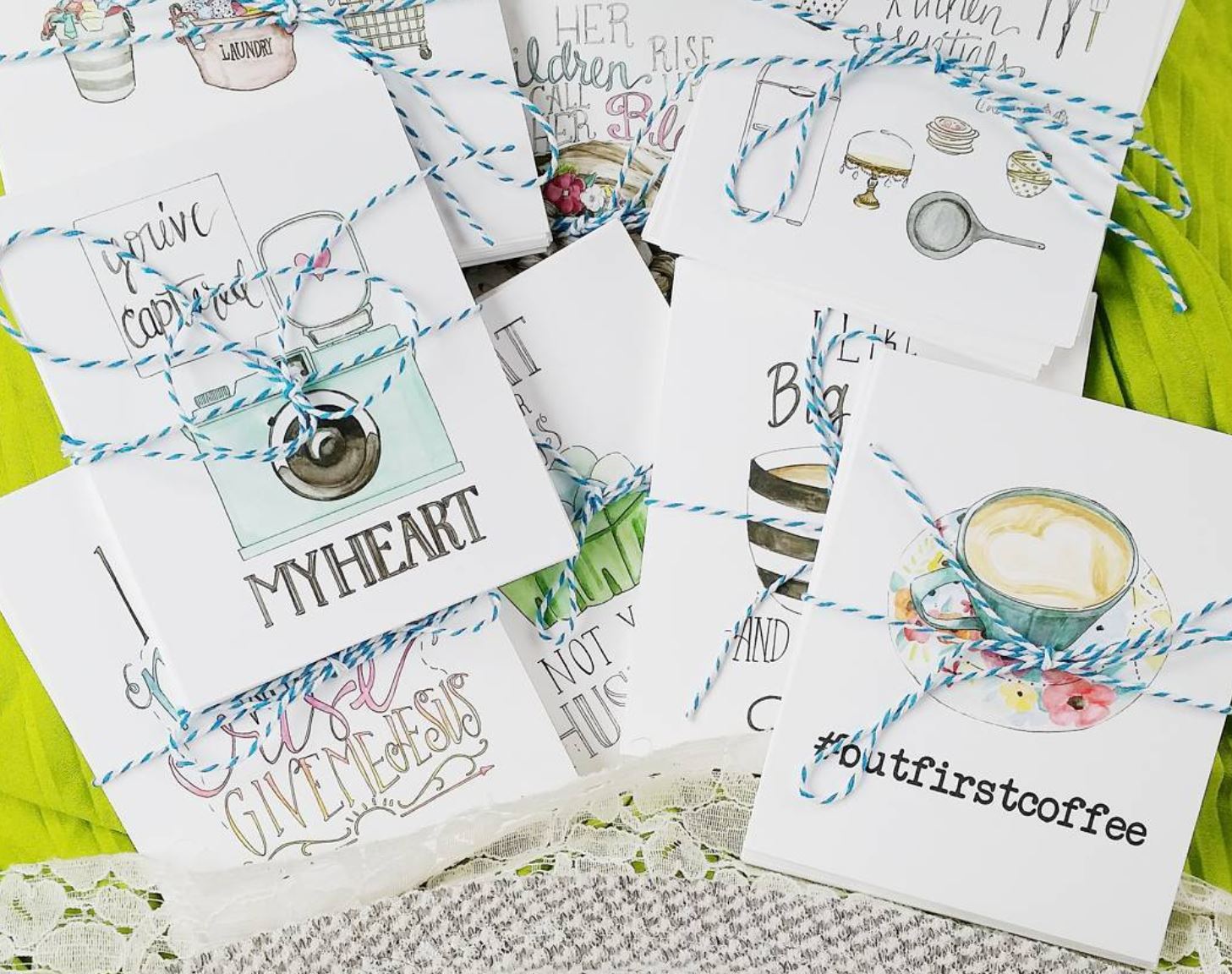 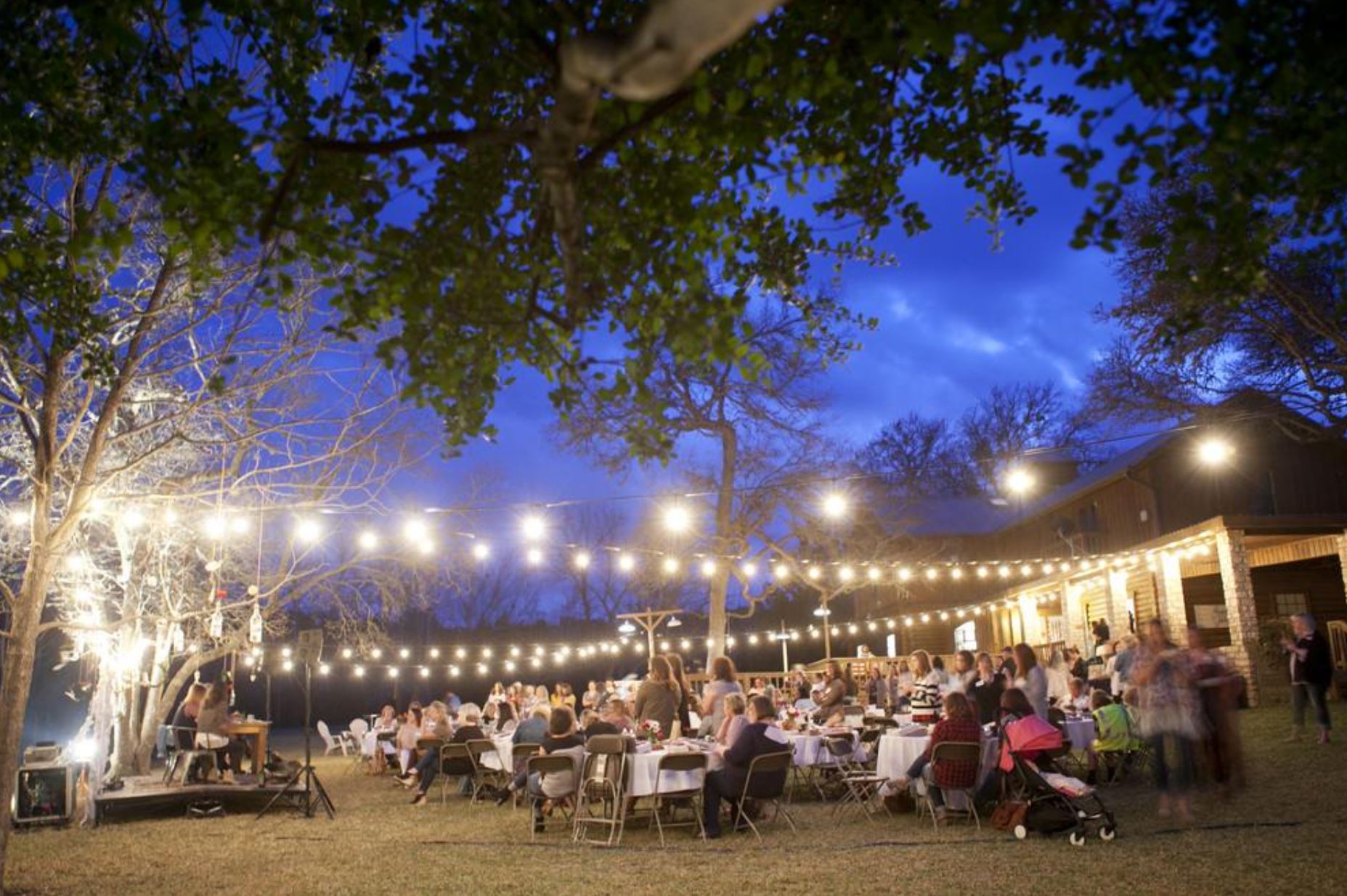 If I’m completely honest, I didn’t feel a strong connection to any of the interviewees for the actual broadcast (The Happy Hour is a podcast), but they were entertaining, and the event itself was lovely! (Twinkle lights! Flowers! Crazy good pork tacos! Wine! Which…seemed to excite everyone else but which I happily passed on because the one swig I had tasted like mouthwash. #teetotaler)

Even lovelier? 36 kid-free hours with girlfriends that included lots of good food + a trip to Magnolia Market on the way back. 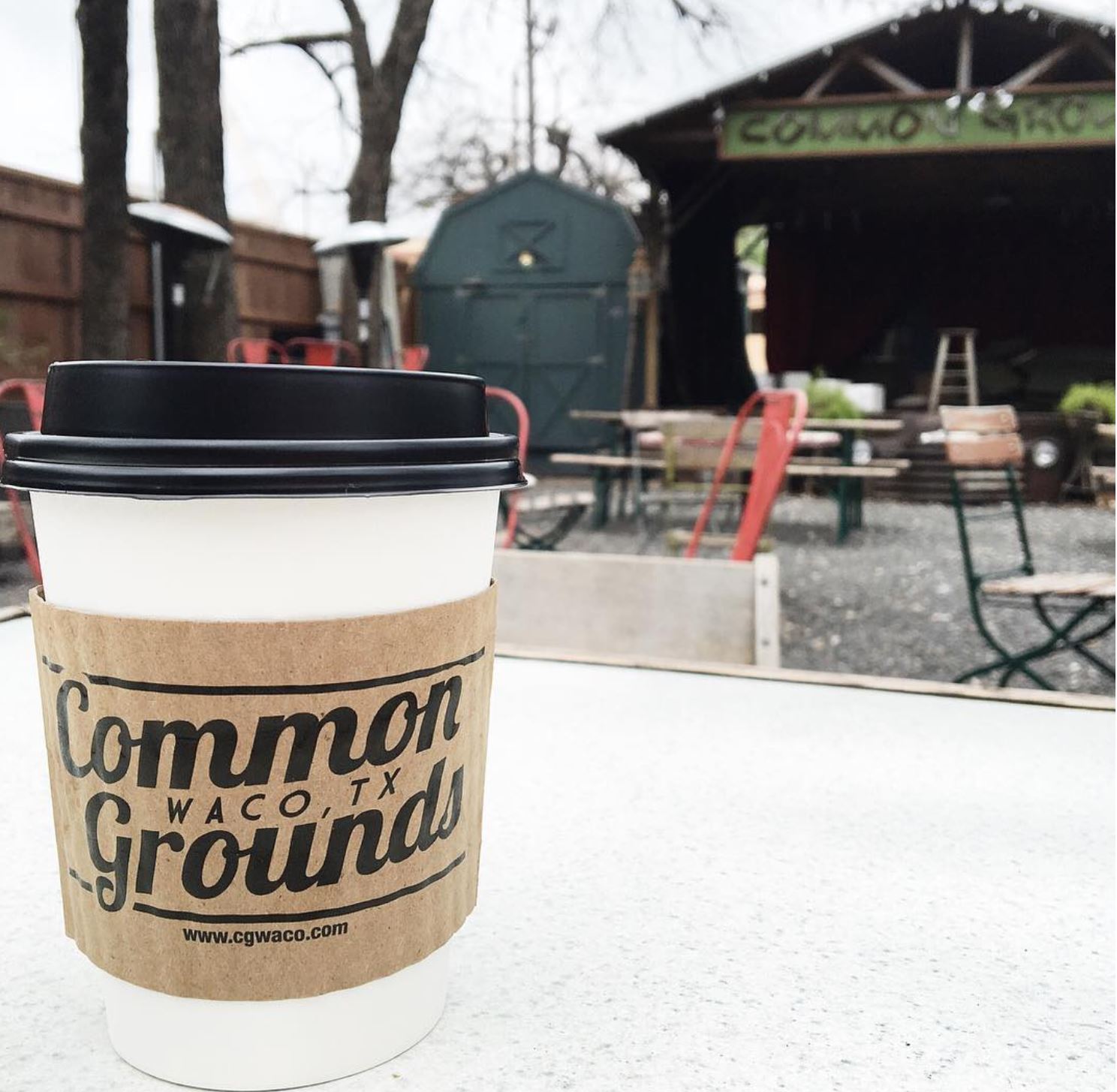 {Oh, and, of course, we couldn’t pass up a quick pit stop at Common Grounds. I got an extra-hot Mexican hot chocolate, in case you’re wondering} 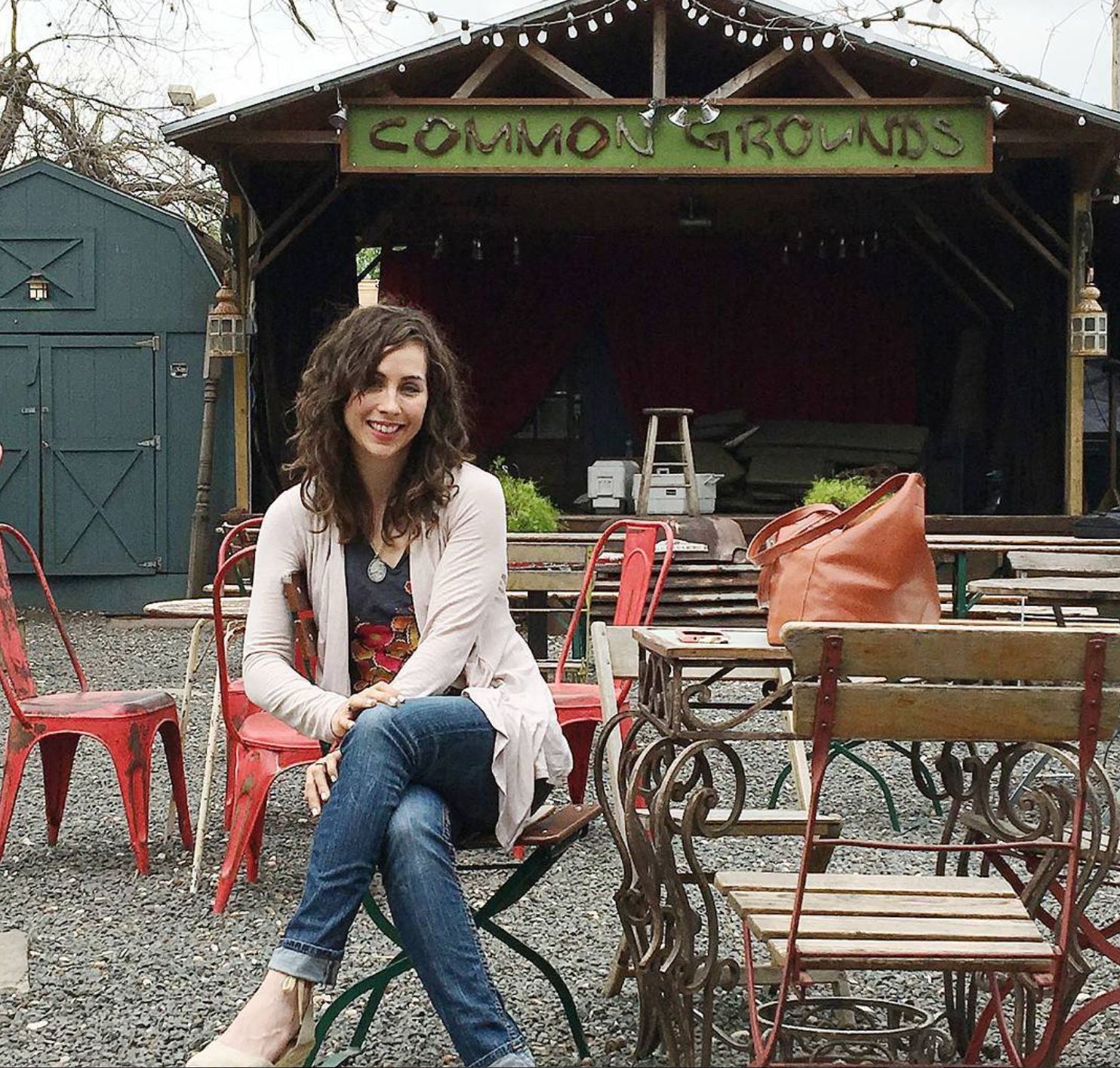 {On an unrelated note, I saw this pic that Lindsay snapped and thought, DUDE! My hair is getting long!}

I’d already been to Magnolia once (when we got Nina, the Nissan van), but it was l.i.t.e.r.a.l.l.y for 12 minutes before they closed, and Shaun and I were the only people in the joint. This was a wee bit of a different experience.

There were snaking queues of people lined up waiting to get in, like it was some sort of popular amusement ride, and inside was even more chaotic. I honestly didn’t know that I wanted anything badly enough to wade through the checkout lines. 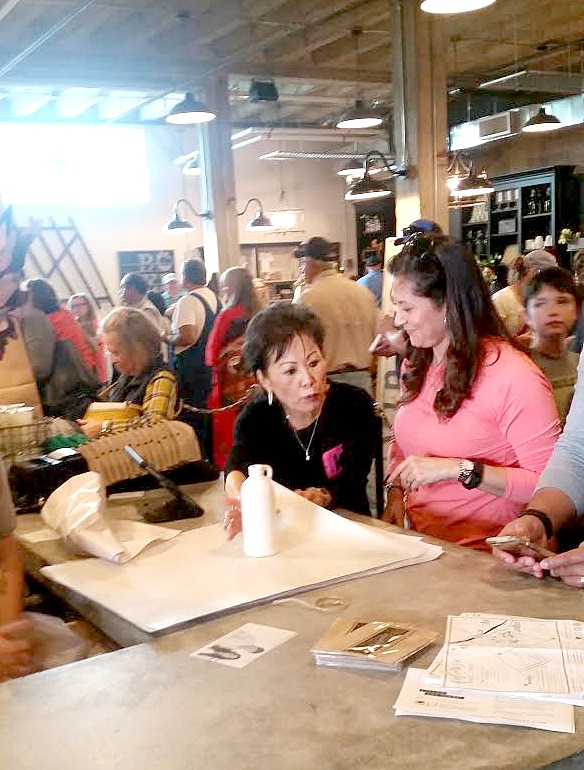 {Sorry for the blurry shot, but I just couldn’t resist a quick snap of Joanna Gaines’ cute mom helping out customers in the checkout line}

Until I saw this beauty. 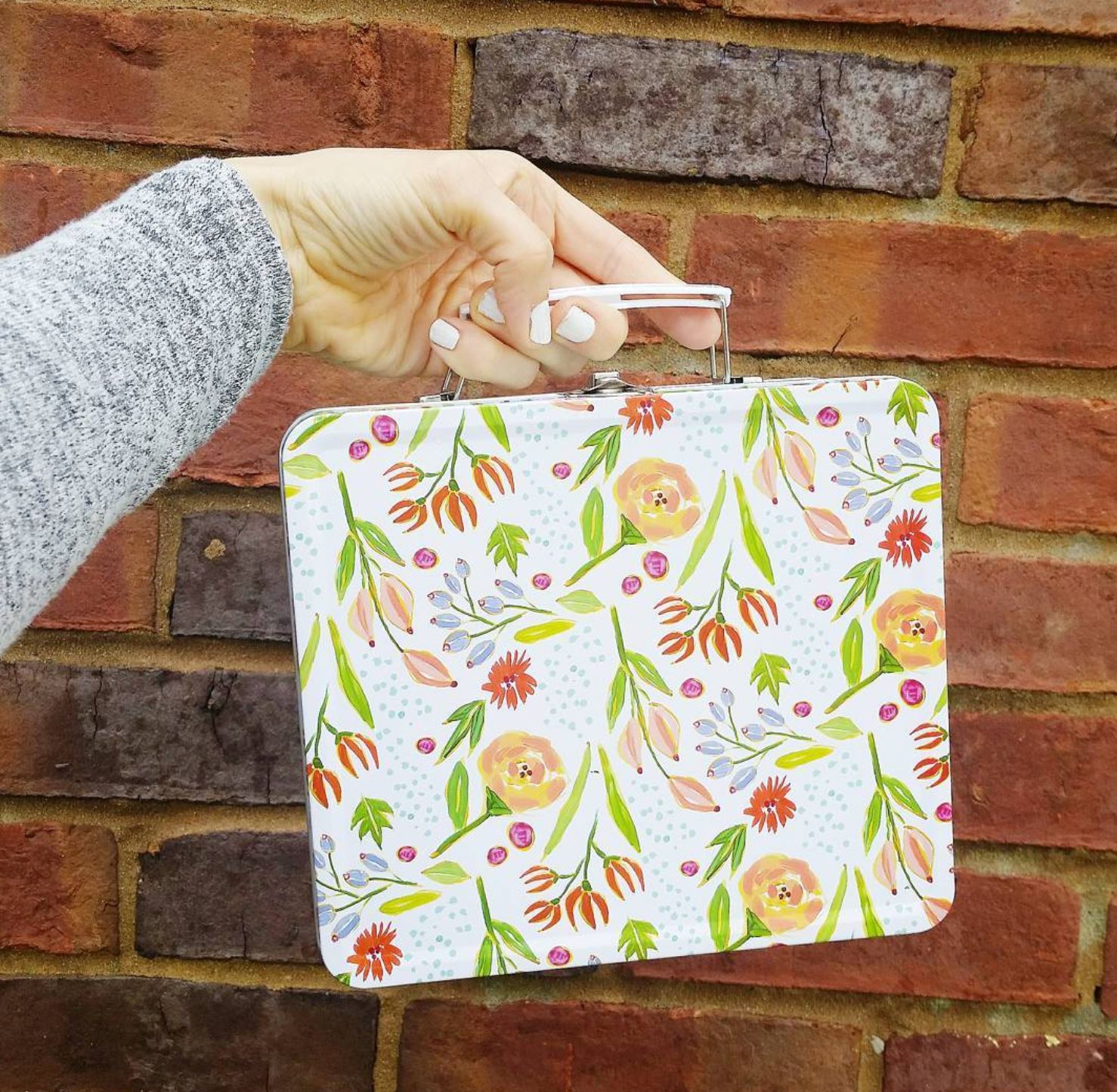 Yup, that would be a floral lunchbox. And no, I haven’t suddenly developed a penchant for wearing my hair in pigtails, eating PBJ’s and skipping.

It’s the perfect size for my fitness mic, which had formerly been housed in a frumpy cardboard box with no handle. So now, even though I look like a bit of a doofus hauling a lunchbox with me to the gym every day, I don’t care. Because it’s really quite brilliantly utilitarian, not to mention dang cute. 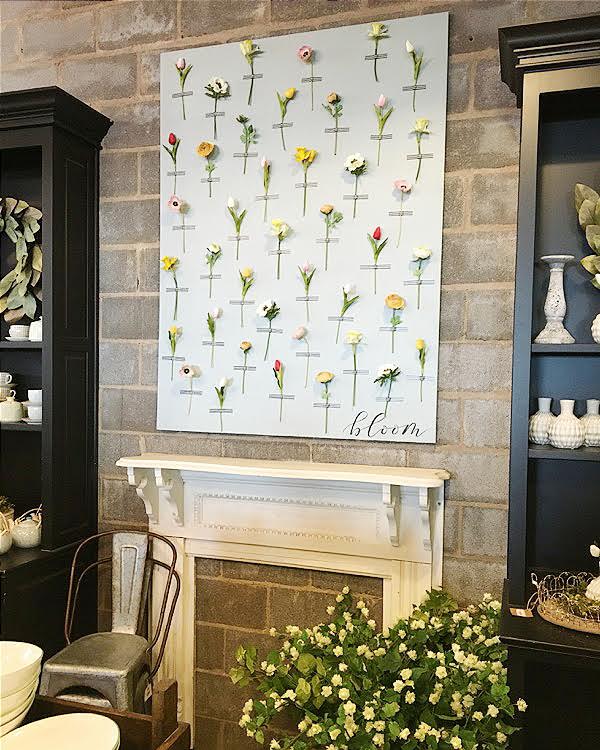 {Everything about Magnolia is cute, but I thought this faux flower display–they’re just held there by washi tape–was particularly clever}

We got back Monday evening, and Tuesday morning began with a phone call from my mom informing us that my brother had fallen off of the roof of his house.

My heart plummeted down to my knees. I literally felt sick. At the point that she was calling, he was just being picked up by an ambulance, and, while he was lucid, we didn’t really know how bad it was.

Turns out, not that bad–especially when you consider that he didn’t just fall off of the roof. He started his slide at the peak (he was inspecting some work that the roofers had done) and proceeded to pick up speed until he literally shot off of the 20-feet-tall edge and landed, feet first, 25 feet away from the house.

He broke one leg very, very badly. The doctors are saying he’ll never run again (although, if the Lord says otherwise, I know that he will). But, quite honestly, he should be dead, brain-damaged, or paralyzed. I’ve had a week to adjust to the shock, but when I actually went to his house for the first time since the accident and stared up at that steep, towering, metal roof, all I could do was think: “Thank you, Lord, for giving us more time with him. He shouldn’t be here.”

After that “excitement,” everything else seems a bit mundane, but other (way more fun) stuff happened too.

I spent an afternoon at Lindsay’s house helping her do a bit of decorating…. 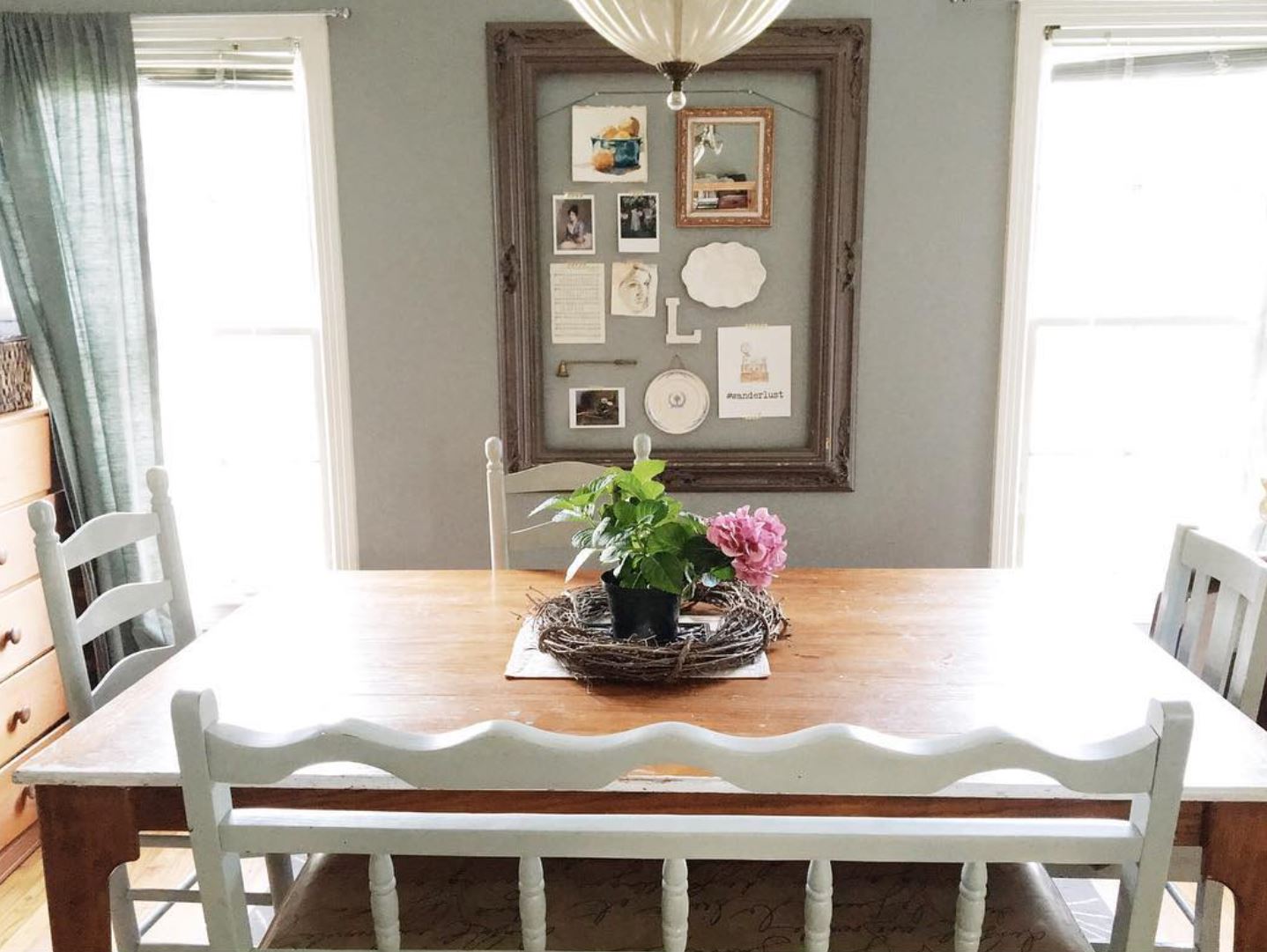 …while the kids insisted on filling the kiddie pool with freezing water and happily splashing around in it for a good hour. I feel a shiver coming on just thinking about it. 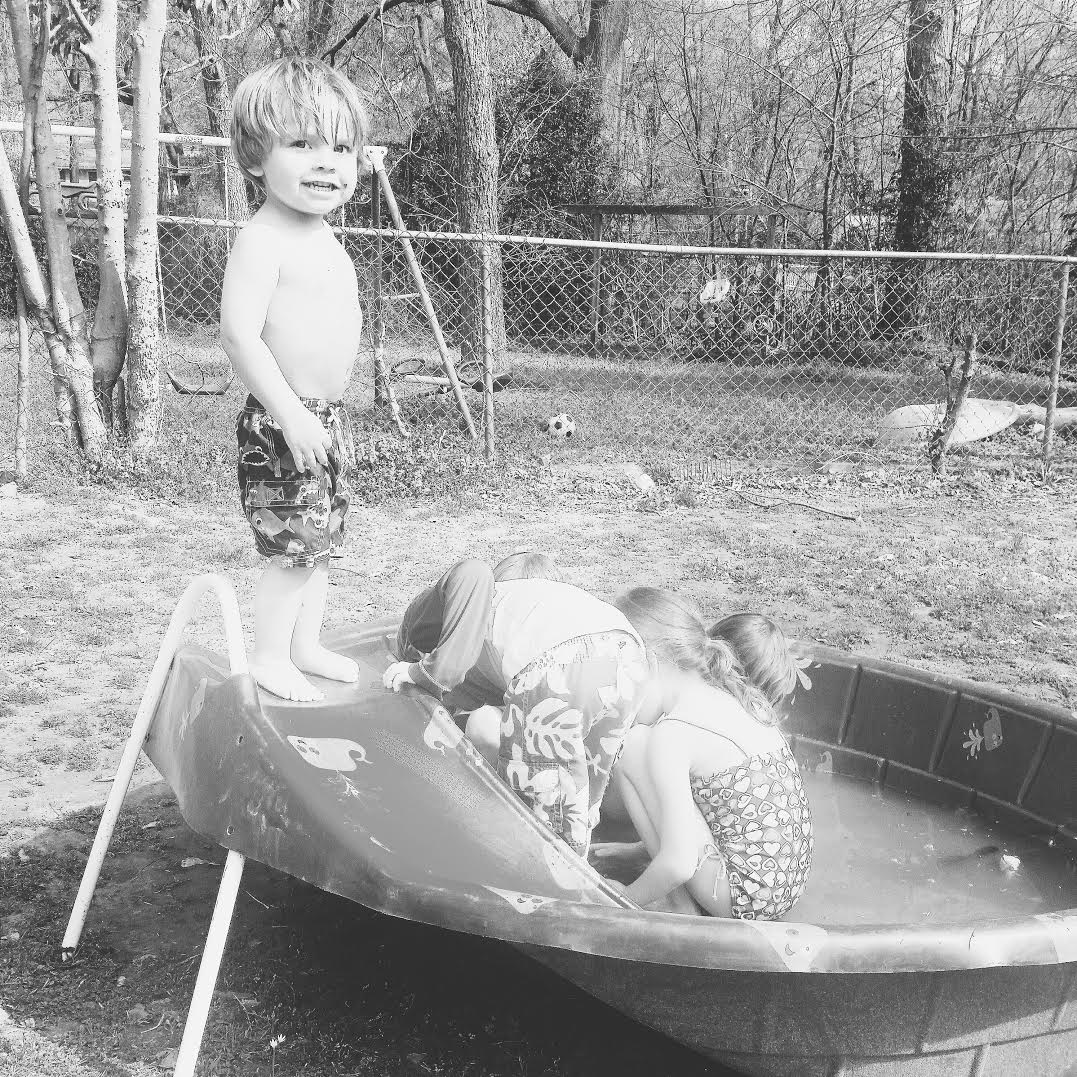 That’s Lindsay’s cutie pie youngest, Judah, but the twins were in there somewhere.

It rained pretty much the entire week, so we stayed inside and baked. 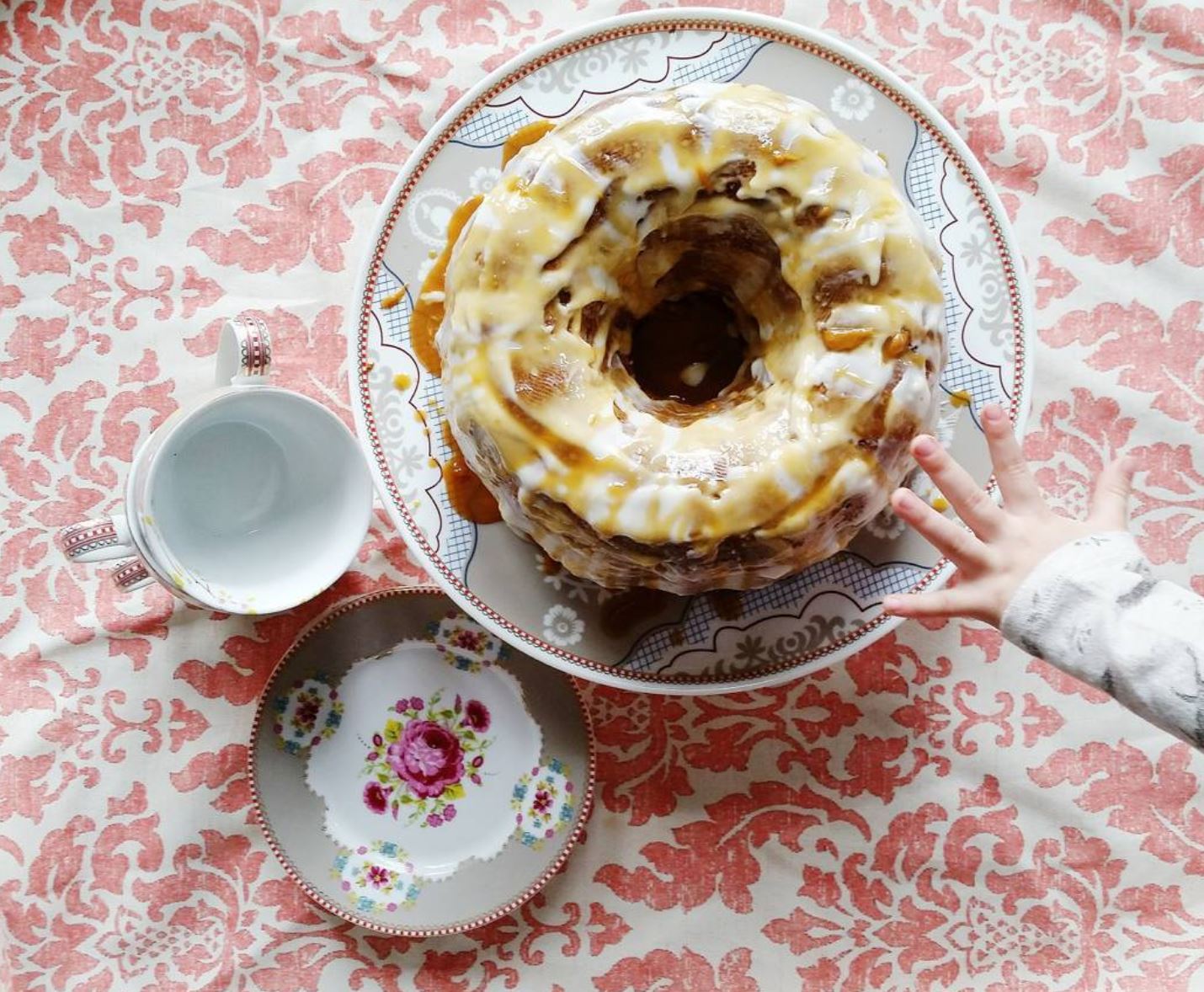 I would have been a bit worried about the fate of my hips, except that I knew that I would be doing a Grit training on the weekend. If you’ve been hanging around here for any length of time, then you know that I teach BODYPUMP and BODYCOMBAT, which are both Les Mills group fitness classes. Well. Grit is also from Les Mills, but it’s a 30 minute HIIT (high intensity interval training) class that I kind of fell in love with. I say “kind of” because falling in love with Grit is bit like falling in love with a tiger. It’s the closest you will get to death while sort of, kind of enjoying it. 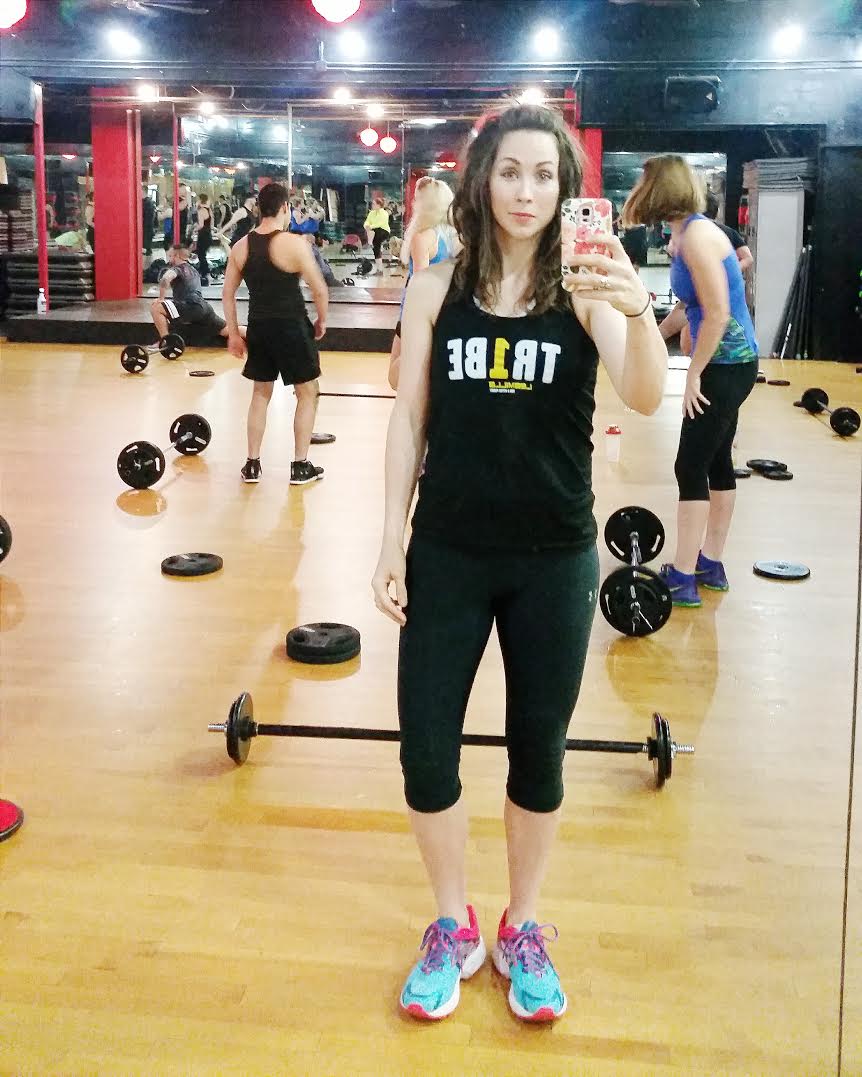 {That’s my, “Welp. Let’s do this,” expression. I certainly had not gotten sweaty yet}

It’s hard, yo. Think: burpees, tuck jumps, air jacks, and just about every variation of a push up you could possibly imagine (including one called a donkey kick push up that I may or may not demonstrate for y’all if I can ever get it down enough not to look like a complete fool)

The best part? It’s ONLY half an hour. So, just when you think you might pass out, you’re done. 🙂

The training was two full days, and I definitely felt like a bit of a limp dishrag by the end of the second day. But I felt strangely accomplished too. I had trained for 7 weeks, practice-teaching Grit before I ever got certified in it, and the actual certification–while hard–was more of a formality (for me, at least) than a shock of: “WHAT did I get myself into?”

I realize this probably sounds like insanity to most of you, but as my certification trainer told me: “There are not a ton of people who truly love this kind of stuff, but you were made for Grit.”

ANYhoo, you’re pretty much caught up on the goings-on around here. The first part of this week has been a process of getting back into the swing of homeschooling and my getting back into the swing of, um, walking. JK. I was fine as of Tuesday, but Monday was pretty much a big ol’ string of “ouches” run together. (Apparently, if you do jump squats for multiple hours two days in a row, your muscles will be less than pleased with you the next day).

What about you guys? Have you already had spring break. Or is it this week? I feel so out of the loop. What have Y’ALL been up to?