Okay, so this is the second time now that I’ve used a Spanish word (moda = fashion) when my brain refused to procure a related English M word for today’s topic.

You guys don’t mind if I teach you a little Spanish via blogging, do you?

So, I mentioned on Saturday that I exercised great restraint in packing for our trip to the giant pear (y’all are funny) Big Apple. I wore all my shoes at least once. And almost all my clothes.

Shaun had already checked the weather extensively before we left (I kind of think the man missed his calling by not becoming a meteorologist. Or does your husband like to report on the weather twice a day too?), so I knew that boots and cute jackets weren’t even an option, since the average temps while we were there reached a high of 80 and bottomed out at a barely chilly 58 degrees.

Was I disappointed to not be able to say “I just love  New York in the fall” with a hot cup of something in my hand, a la Kathleen Kelly? Yes. I can’t deny that I was. But I don’t actually like being cold very much, and the heat allowed me to wear one layer at a time for the most part, which made stuffing all of my clothes into a carry-on bag possible and also kept me from accidentally leaving my jeans jacket behind on a train (not that I’ve ever done that before).

Speaking of You’ve got Mail, here I am in Riverside Park. 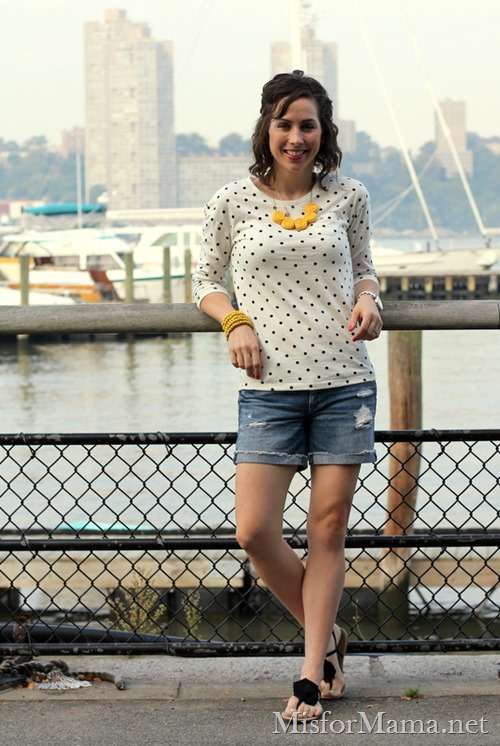 And here’s my plane outfit, to which I had planned to add a cardigan and a scarf, but it just wasn’t cold enough, darn it. 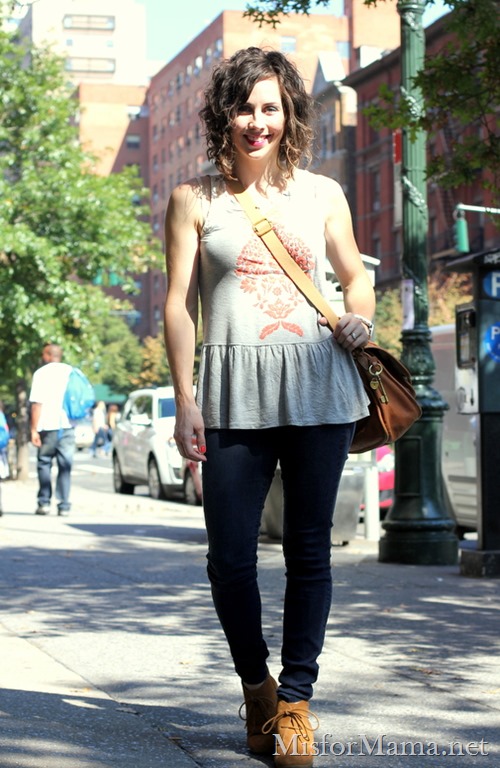 The concept of a chambray shirt over a polka dot tank with white shorts and striped sandals sounded cute in my head. But in real life, it just looked a bit blah. 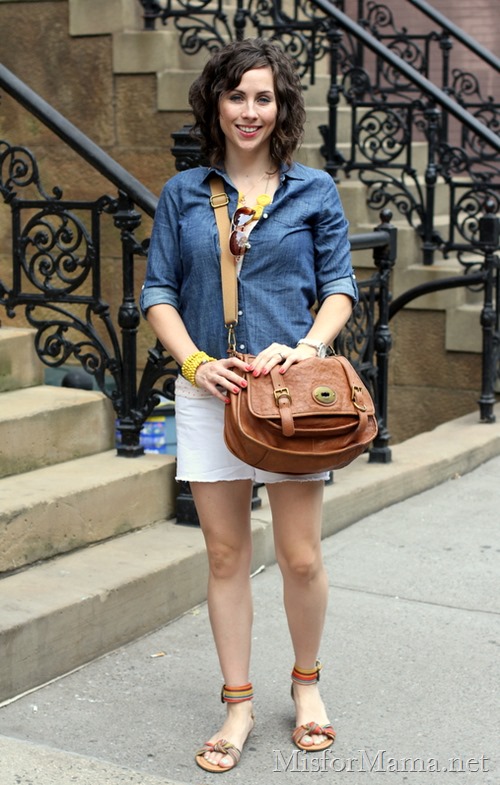 Which brings us to what I wore to a taping of Late Night with Jimmy Fallon (which was really entertaining and resulted in a .015 second cameo of me and Shaun wildly waving before the Olive Garden graphic obliterated our heads as they cut to commercial). 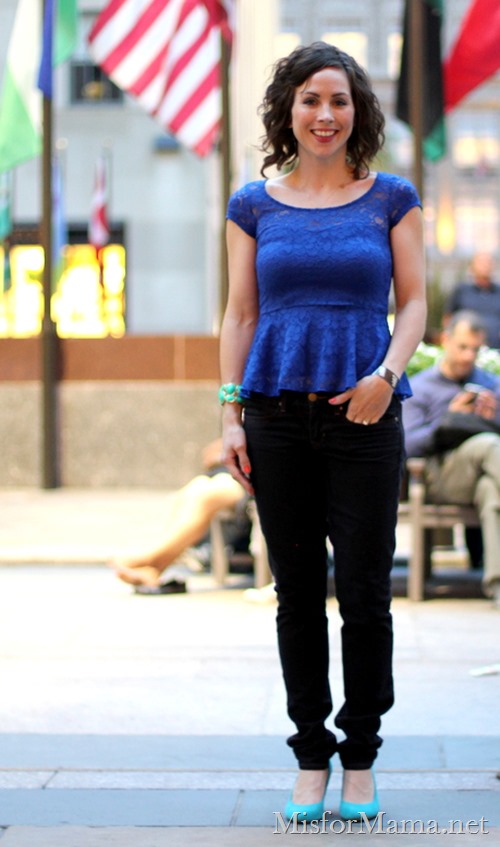 And finally (almost) to the gussified outfit I wore for our night out on the town, which I memorialized with my $53 blowout (it’s still straight—Day 6, in case you haven’t been getting my instagram updates). 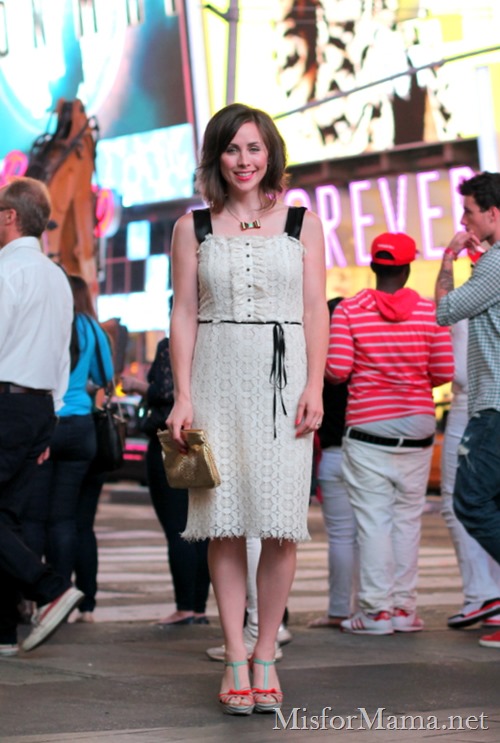 This is right in the middle of Times Square after we saw Motown the Musical (which was so so good, by the way). It was lit up like day. And that guy’s saggy-pantsed bum that is photo-bombing this picture was one of the more modest views around. Holy Moly! There were kids everywhere (even though this was taken at almost midnight), which made me all the more eager to tell the lady wearing nothing but paint and a thong and the cowboy in only his whitey-tighties strumming his guitar on the corner to take a hike! Sheesh.

We got back on Saturday night, and this last one was taken the next day. After my family watched all five of our children for 4 days and nights, his parents were nice enough to babysit while we went out for dinner and a movie on Sunday (my actual birthday). 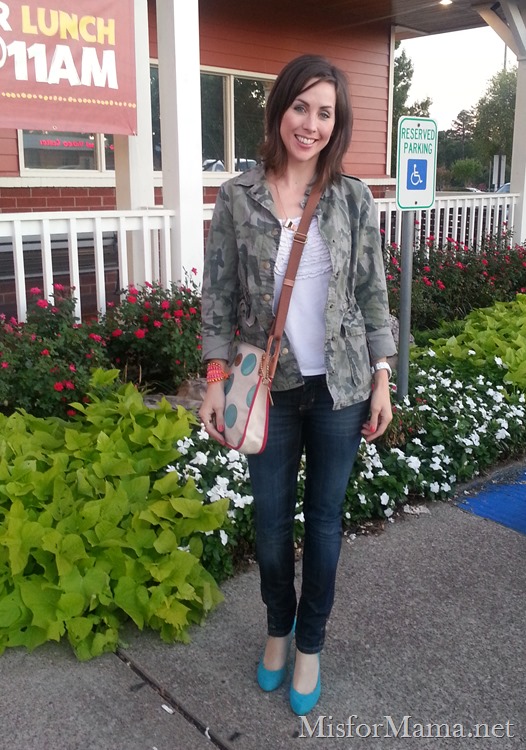 We saw Gravity (which was a little hard for someone with an aversion to dark, open expanses). Of course, it’s a bit tense for anybody, considering the subject matter, but I won’t ruin it for you—only recommend that you watch it once (now that I’ve seen it, I have no desire to again, but it was really well done).

The only hiccup in our birthday date came when we tried to go to no fewer than 4 of my favorite local restaurants, only to discover that every one of them was closed on Sunday.

Somehow, we ended up at Outback Steakhouse, which is most definitely open on Sunday. We really need to stop scheduling special occasions on that day of the week.

So, there you have it!

Tomorrow, I’ll share more of the details of our fantastic whirlwind Big Apple trip, but at  least now you have the peace of mind of knowing what I wore (phew, right?).

Did you have a favorite look? How would you have styled that outfit I didn’t like to make it more interesting?

Linking up with Lindsey